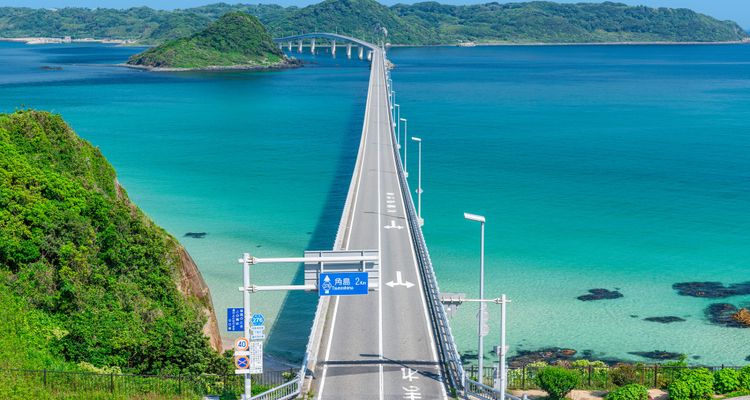 Being an archipelago, Japan is home to almost 7,000 islands! Off the coast of the mainlands of Honshu, Kyushu, Shikoku, and more, are thousands of tiny Japanese islands all worth exploring on their own. Some have thriving communities with profound histories, while others remain untouched by humankind. Being separated from the mainland, all have unique qualities, tantalizing the adventurer seeking something fresh and exciting. In this article, we’ve selected 10 solitary Japanese islands worth adding to your itinerary, each with its own distinctive allure and charm!

The charming little Japanese island of Okunoshima, in the middle of the Seto Inland Sea, has no permanent residents...or that is to say human ones!

Okunoshima is home to over 900 rabbits that hop, flop, and frolic freely all over the island year-round. Accessible via a 12-minute ferry ride from Tadanoumi Port in Takehara City, this “Rabbit Island” sees around 100,000 annual visitors flocking from all over to see these fluffy bunnies - which are often friendly and used to people.

However, despite its adorable image, Okunoshima has a dark history serving as a base for poison gas manufacturing during the war. Post-war, however, these facilities shut down, and the rabbits that were used to test the noxious fumes were set free and doing as rabbits do, soon multiplied to claim the island as their own.

From the “Island of Exile” to an “Island of Gold,” and now a remote paradise getaway and candidate for UNESCO status, Sado Island has seen drastic changes in its identity over the centuries.

Beginning with the Nara Period (710-794), Sado Island was where political enemies of the state were sent to live their days in isolation. In the Edo Period (1603-1868), however, massive quantities of gold and silver were unearthed, and the island soon bustled with prospectors and miners seeking their fortune.

Today, the island is focused on environmental recovery and sustainable tourism, working to undo the devastating damage of the mines on the lush natural spoils. Much of the island is reserved for conservation, enticing nature-lovers alongside gourmands seeking high-quality seafood from the Sea of Japan. Sado Island can be accessed via car ferry or jetfoil from Niigata City.

Fresh seafood may be one of Manabeshima’s selling points, but travelers aren't the only thing that succulent sushi attracts. Manabeshima is often referred to as the “Cat Island” due to the sizable number of feline friends that wander this Japanese island in search of generous fishermen willing to toss a sardine.

Cat Island is also famous for being the backdrop of many movies, including “MacArthur's Children,” which kicked off Ken Watanabe’s career, as the island gives off a strong “hometown fishing village” vibe that remains largely unchanged. Many of the houses and buildings on the island are more than 100 years old, and are a treat for lovers of traditional Japanese architecture.

Visitors can reach the island via ferry from Kasaoka Port in Okayama Prefecture in just over an hour, and the island can be easily traversed either by bicycle or on foot.

The largest of Okinawa’s Yaeyama islands, Iriomotejima remains one of the wildest places in Japan! The island is a 40-minute ferry ride to Ohara Port from Ishigaki Port on Ishigaki Island, which itself can be reached via airplane from Tokyo.

Cloaked in lush forests draped over jarring mountains, Iriomotejima is flushed with waterfalls, sandy beaches, and mangrove forests, and is meant for those with a heart that yearns for adventure.

Outside of trekking, one popular activity is to kayak deep into the forest rivers to discover a world hidden from most tourists. If you’re really lucky, you may even spot an Iriomote wildcat, one of the island’s endemic species only found here!

Also called the Bonin Islands, the Ogasawara Islands are a string of volcanic islands nicknamed the “Galapagos of Japan” for their remote location and unique biome.

While technically part of Tokyo, you will have to endure a 24 hour ferry ride to get to these Japanese islands, and there are no flights. Those willing to make the journey are treated to pristine beaches, riveting forest trekking, and even dolphin and whale watching.

The remoteness of Ogasawara has also given rise to many endemic species, such as the Bonin flying fox, leading to their designation as a UNESCO World Heritage Site. The islands continue to provide invaluable insight to researchers studying the evolutionary process.

Plus, for those who are fans of Pokémon, Ogasawara is where you’ll find one of the rarest Pokémon in all of Japan - or at least its Poké Lid! As part of the Pokemon Local Acts Poke Lid Project, a colorful manhole featuring legendary Pokémon Mew awaits your discovery on Chichijima Island, along with Charizard, Blastoise, and Venusaur!

Just a few hours from Tokyo by jetfoil, Niijima Island is part of the Izu Islands, and is famed as a surfing mecca for its abundance of white sandy beaches. It’s equally popular for other marine activities like snorkeling and scuba diving, with sealife of all varieties attracted by micro-pockets of warm water created by volcanic activity.

After shredding some waves, you can unwind in one of the numerous hot spring baths, many of which are free for the public to use, such as this grand Roman-style bath pictured above. Sand baths are another popular activity on Niijima, as there are few things more calming than kicking back under a blanket of warm sand to soothe the skin.

At one time, Gunkanjima, officially called Hashima Island, was home to around 5,000 residents in just 63,000 m² of space, resulting in the highest population density ever recorded worldwide.

The name in Japanese means “Battleship Island,” as every piece of the island was built up to maximize its limited space, giving it the appearance of a wartime cruiser. Between 1890 and 1974, the island was a bustling coal mine whose economy was fed by this once-burgeoning industry.

With the closing of the mines in 1974, all residents were forced to leave the island and relocate, and a series of typhoons and coastal storms weathered the now abandoned landmass to give it an eerie, beaten down appearance. Today, visitors can take tour boats to and around Gunkanjima from Nagasaki to bask in its otherworldly, apocalyptic appearance up close.

Rather than the island itself, Tsunoshima is arguably most famous for its photogenic 1,780-meter-long bridge connecting it to the mainland of Shimonoseki, Yamaguchi. The Tsunoshima Bridge has featured in a multitude of commercials in Japan, and is a must-visit for travel photography enthusiasts.

However, the island itself is not to be overlooked! Tsunoshima is home to one of Japan’s 16 climbable lighthouses, along with pristine patches of nature, gorgeous cobalt blue seawaters, breathtaking coastal views, and more.

Located off the coast of Ise, Mie Prefecture, Kamishima’s beauty is so exceptional that it inspired famous Japanese author Yukio Mishima’s classic novel “The Sound of Waves.” The sheer seaside cliffs have protected it for millennia, allowing it to cultivate pristine nature right out of a painting.

The name Kamishima translates to “Island of the Gods,” which is in reference to Yatsushiro Shrine. This prestigious shrine has been venerated since ancient times, with archeologists unearthing artifacts on the grounds dating as far back as the Kofun Period (300-538).

The best time to visit Kamishima is during the annual Geta Festival, which is held each year on the first of January. During the festival, local men will don white clothes and carry a sacred ring known as an “Awa” through the town, eventually placing it up on a bamboo pole. The festival has deep cultural significance, and is a truly unique experience.

While most associate islands with the ocean, Chikubu Island actually sits in the northern waters of Lake Biwa, the largest lake in Japan.

Just two kilometers in circumference, Chikubu is believed to be the residence of several deities, and the island’s Hogon-ji Temple and Tsukubusuma Shrine are highly venerated places of worship. It is also said that generals of the past would visit Chikubu Island to pray for victory in times of war.

Despite being uninhabited, Chikubu Island can be easily visited by ferry from Nagahama, Imazu, or Hikone ports, and offers plenty of space for peaceful strolls amidst marvelous nature.

Out at Sea Is the Place to Be

Among the stresses of daily life, stealing away to a remote island is sometimes the only way to find a moment of peace. Whatever Japanese island you may find yourself castaway on, you’re sure to encounter nothing but serenity and solace as you set out on a path, or dare we say current, less traveled.