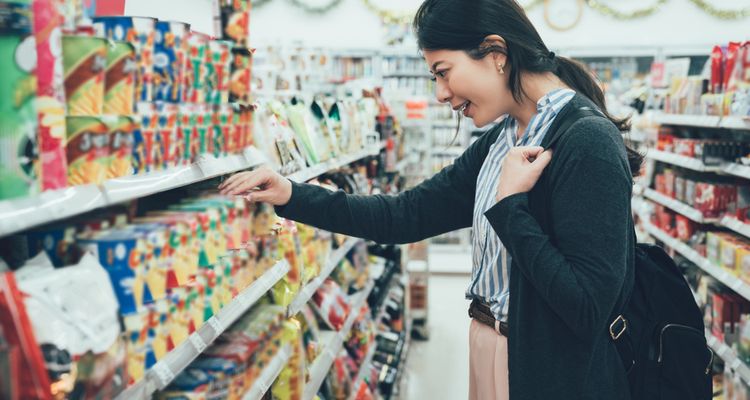 No matter where you may find yourself in Japan, day or night, you’ll always be able to find a trusty conbini (convenience store) nearby. The vast array of products and services these stores offer are integral to the bustle of life in modern Japan. Fried chicken, soft serve, banking services, and electronics are just a few of the things you'll be able to get your hands on in one of these stores. Read on to find out more about the world that awaits inside the humble Japanese convenience store!

Convenience stores, particularly in the Western world, have somewhat of a dodgy reputation when it comes to food. The "fresh" food sections usually consist of a few sandwiches, and the quality of these foods are questionable. This is far from the case in Japanese convenience stores! Fresh food is brought in multiple times daily, and the choice on offer far outranks anything you may come across in convenience stores outside of Japan. You’ll be able to purchase warm foods such as fried chicken and dumplings at the counter, and staff can also heat up a range of pre-made meals such as ramen, curry, and burgers. The onigiri (rice ball) section also offers a range of choice when it comes to flavors and fillings.

Naturally, you’re also able to buy a range of snacks and sweets here, too! Most stores also come with an extensive frozen section: in fact, we've got a whole article dedicated just to the ice creams you can buy in these section. You can also get some great frozen meals here too such as gyoza platters which are perfect for parties.

It’s not just the food section that’ll leave you spoiled for choice inside a conbini! The drinks sections also boast a wide variety of options for quenching your thirst. There’s always at least one fridge dedicated purely to coffee, and another brimming with choices of tea such as jasmine, barley, and green tea. Energy drinks, sports drinks, and fizzy drinks are usually found together in the same section, and then there’s always 2-3 fridges providing a range of alcoholic drink options. You’ll be able to purchase normal, light, and non-alcoholic beers at every conbini, plus canned mixed drinks like chu-hai, wine, whiskey, and Japanese liquor like sake and shochu. You can also purchase warm bottled and canned drinks from a heated section of their own, perfect for a cold winter’s day.

While you’re out and about traveling anywhere in the world, one of the most important considerations is access to money. Fortunately for Japan, every conbini contains at least one ATM, and virtually all of these ATMs (especially in urban areas) accept international cards! This means that you rarely have to worry about exchanging foreign currency while in Japan as you can withdraw yen directly from most conbini stores.

For those spending more time in Japan than a short holiday, convenience stores also provide several other financial services. The ATMs can be used to deposit and send money to other bank accounts, to purchase and print tickets for events, and you can also pay most household bills over the counter.

Convenience stores also make life that little bit easier by providing a number of other services under one roof. For starters, all of the major convenience stores provide access to free WiFi!

You can scan, print, and send documents using nifty all-in-one machines, and you can purchase a range of electrical products such as portable phone chargers in most stores. On top of this, most convenience stores can take care of delivering parcels (up to 25kg) within the country. Simply bring your parcel to a store, fill out the form (in Japanese with English labels), and pay the fee.

You’ll be able to pop into most convenience stores for a bathroom break while travelling, and a good portion of stores have seating: great for when you want to eat that fresh food you’ve just purchased! It can be hard to find a garbage bin on the streets in Japan, but you’ll always be able to dispose of your rubbish at a convenience store.

Originally an American convenience store, 7-Eleven came to Japan in 1974 and now boasts 20,000 stores throughout Japan: the highest number in any country in the world! Wherever you go, you’ll likely find the iconic red and green stripes nearby.

This store also has the most reliable and easy to navigate WiFi of the three main conbini chains. Furthermore, some say the bento (packaged lunch) selection at this store is arguably the best of the big three chains. Many food producers partner specifically with 7-Eleven for limited-edition products such as instant noodles and dried snacks.

Lawson has the smallest presence among the three big conbini chains inside major cities, but it makes up for this with the quality of its food. The Lawson premium sweets range is marketed under the brand UchiCafé, and offers some mouth-watering treats such sponge cakes and fresh melon pan to name but a few. The  popular Karaage-Kun fried chicken range also offers several tasty twists on standard karaage such as the highly popular cheese karaage bites. For beer enthusiasts, Lawson also stocks the best range of seasonal and craft beers of the big three chains in Japan.

FamilyMart has a big presence all over the country and offers a good selection of high-quality foods. Perhaps the most famous of these foods is the ever popular FamiChiki range – a selection of seasoned pieces of juicy chicken breasts that are an absolute treat. FamilyMart also has a great selection of yakiniku (grilled meat) skewers that you can buy individually or as a set in a takeaway tray.

At the front of the store, you’ll find a wide range of steamed buns, including the simple meat bun, the black and fiery tantanman bun, and the much loved pizza bun.

Lawson operates two notable offshoots of its main brand: Lawson 100, and Natural Lawson. There are over 800 Lawson 100 stores across Japan, and they can be spotted by their green instead of standard blue signs.

As the name suggests, everything in a Lawson 100 store is priced at 100 yen (excluding consumption tax), and unlike most other 100 yen stores that stick to household products and processed foods, Lawson 100 offers a healthy selection of fresh fruits and vegetables.

Natural Lawson stores, identifiable by their burgundy signs, take the already high quality of conbini products one step further. They can be found in most urban centers and business districts.

The Natural Lawson range of products are nutritious, fresh, and often healthier than standard conbini fare. The majority of their products are ethically and organically-sourced, and this also applies to a large selection of the beauty products you can find here, too.

While not as common as previously mentioned stores, Mini-Stop excels in two areas. The first of these is seating. Unlike other convenience stores, where there is no guarantee of a seating area, Mini-Stop has fast food made to order and seating aplenty, so you can always rely on this chain when looking for a place to rest your feet.

Secondly, Mini-Stop is widely regarded to have the best ice cream selection out of the competition. Our recommendation is the melon soft serve, which is absolutely unbeatable on a hot summer’s day.

Daily Yamazaki first opened its doors in 1977 and has earned itself a reputation for its delicious baked goods. These include many varieties of bread, pastries, and freshly made sandwhiches such as the menchi katsu (ground meat) sandwhich. Of course, you'll also find the usual array of offerings you'd expect from a Japanese convenience store here, too.

If you happen to find yourself in Hokkaido, don't miss out on a stop to the regional conbini chain Seicomart. Aside from ski resorts and snow festivals, Hokkaido is also famously known as Japan’s key farming region, a fact evident from the quality of fresh produce that you can find in this chain of stores.

The milk here comes from nearby farms, meaning you can really taste the freshness! If you get the chance, try some fresh Hokkaido milk, an ice cream, or one of the bento boxes prepared fresh in-store using locally sourced ingredients!

Unassuming at first, step inside a Japanese conbini and you'll experience a slice of modern Japanese life. The endless selections of sweets, drinks, fresh foods available are fun to browse, but conbini are also a great resource for any traveler. Providing 24 hour access to ATMs, clean bathrooms, and essentials like toiletries or a fresh coffee, Japanese conbini really help make travel a breeze. Be sure to take advantage of all they have to offer next time you're in Japan!