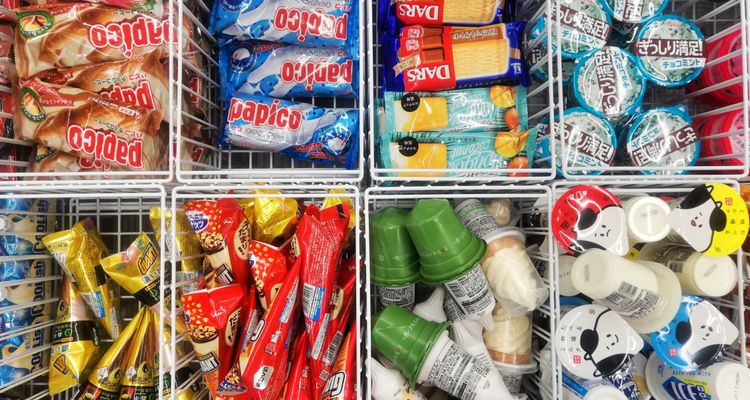 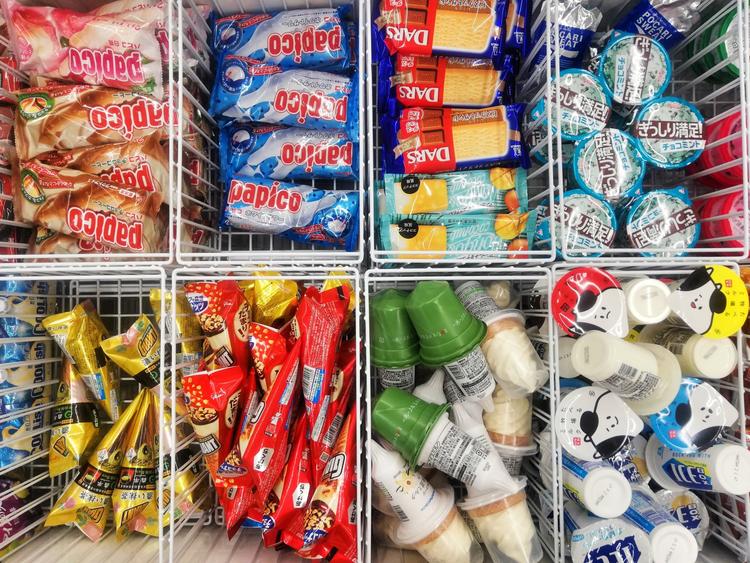 Classic vanilla ice cream wrapped in a coating of chocolate. It comes in a variety of different fancy flavors like Caramel Banana Chocolat, Fondant Blond Chocolat, Rich Chocolate Champagne, and Nutty Chocolat, but even just one bite into the plain Chocolate will have you bowing down to its luxuriously silky texture and decadent flavors.

Little bites of chocolate covered ice cream! They even come with a small toothpick so you can eat them without a fuss. Some flavors include matcha, strawberry, and caramel fromage.

Different varieties of shirokuma (white bear) are available at all the major convenience stores. They come in both cup and bar form. Compared to your average convenience store ice cream, these are sold at a slightly higher price. The ice cream is not actually ice cream, and is actually shaved ice with a rich milk flavor. For the cups, a variety of colorful fruit is piled up on top, too!

Choco Monaka Jumbo has a crispy wafer (monaka) on the outside, and is packed with vanilla ice cream on the inside. Right in the middle, you'll find a crunchy slab of ice cream that goes extremely well with the ice cream! In the Monaka Jumbo series, there's also a vanilla flavor that you can get if you're not a huge chocolate fan.

Monaou is another wafer ice cream, but this one has less grooves on the surrounding wafer. In addition to vanilla, they also have flavors like coffee, green tea, and even pudding! Vanilla is its most popular flavor, though, so you might have to look around a bit more if you want to try the others.

Haagen-Dazs is an ice cream brand known all over the world, but did you know that Japan releases a very extensive lineup of different flavors? They often change with the seasons, and before you know it, you'll be discovering brand new products on the shelves! There's also ice cream sandwiches and ice cream bars.

GariGarikun is a popular classic ice bar. "Garigari" is an onomatopoeia for a crunching noise, which perfectly describes the sound it makes when you bite into it! It's more like a block of frozen flavored ice without any milk, so it's really quite refreshing!

Worried about your ice cream melting and dripping all over your hands? Coolish comes in a little package that has a little tube on top for you to slurp from. You can even screw the cap back on so it doesn't drip out!

Super Cup is officially called "Essel Super Cup" - the "Essel" comes from a combination of "excellent" and "essential," and the "super" describes the super rich flavors and size! These come in several different flavors, so you'll always have something to look forward to.

Suika Bar (watermelon bar) is a cute popsicle in the shape of a - you guessed it - watermelon! The watermelon seeds are little chunks of chocolatey surprise. Another cute fact: the hippo mascont on front wearing the watermelon mask is named Suikaba-man. "Suikaba" is how Suika Bar is pronounce in Japanese, with "kaba" meaning "hippo" and "suika" meaning "watermelon," so it could be roughly translated as "Watermelon Hippo Man." It's a pun layered in puns!

Similar to Super Cup, but in square form! "Sou" is the Japanese character for "refreshing" - a very fitting name for ice cream. These also come in a wide selection of flavors, so hace fun looking for a flavor that suits your preferences!

Just like the Coolish that was mentioned previously, Papico is very convenient to eat! It comes in a plasitc bottle shape, and all you have to do is break off the top to eat it. Rather than your typical creamy ice cream, this is more like a frozen smoothie. Many of their flavors are fruity, but they also have other flavors like chocolate too!

Ice no Mi literally translates into "fruit of ice." These come in little balls of colorful icy goodness. You might expect them to be icy at first, but when you place them in your mouth, it almost feels like they're melting away! They have a surprisingly juicy texture that you wouldn't expect at first glance.

If you're familiar with mochi (sweet rice cakes), Yukimi Daifuku is what you would call ice cream mochi! They come with a little pick so you can comfortably eat each mochi. They have a huge lineup of different flavors, with many special edition flavors too. Some even have small surprises when you bite into them!

Azuki beans are a type of red bean often used in Japanese sweets. They're commonly made into a sweet bean paste that you can find inside mochi and a variety of other popular treats! This bar is perfect for those who love this taste - you'll get the strong, distinct taste of sweet azuki with each bite!

Giant Cone is exactly what it's name suggests - a giant wafer cone full of ice cream! The inside of the cone is layered with chocolate and nuts, and there's a nice coating of chocolate and nuts on top as well. The cone is a great bonus for easy eating too!

MOW (pronounced like the "mow" for "mowing your lawn") might look like a simple ice cream cup, but its flavors are delicate and luxurious. A classic in the Japanese ice cream game, you can find it in a variety of flavors, such as Ethiopia Mocha Coffee, Uji Matcha, and Salty Butter Caramel.

Convenience stores in Japan have a huge selection of tasty ice cream. The wide variety of flavors ensures that there's something for everyone, so be sure to try some when you're in Japan!