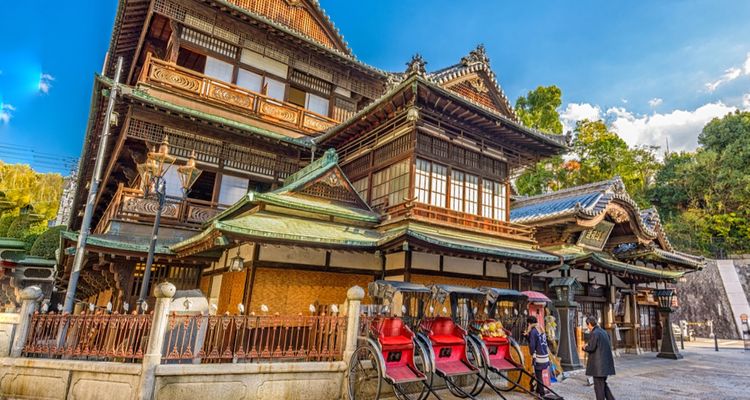 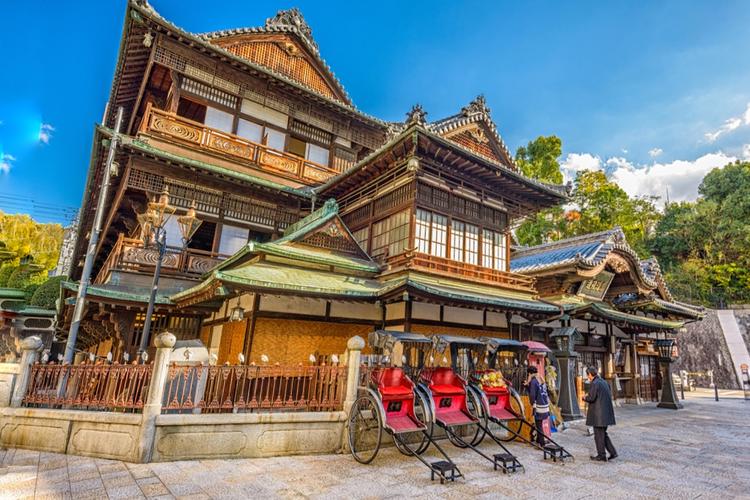 Spirited Away, the masterpiece of renowned animator Hayao Miyazaki, took the world by storm in 2001. In the film, the female protagonist Sen worked in a magnificent Japanese bathhouse where spirits went to relieve their tired souls. Did you know that the design of this unique bathhouse came from real-life Japanese onsen (hot spring) hotels? This article introduces several real Japanese bathhouses that have similar vibes and designs as the one in Spirited Away. Fans of the animated film should check out this article an add a visit to a Spirited Away bathhouse before sightseeing around Japan!

*Construction work started on January 15, 2019 and is set to be finished by December 2024. However, only certain sections are affected and you can still bathe there to this day.

At Dogo Onsen Honkan, a drum called "Tokidaiko" is struck every morning at 6 am to indicate that the baths can be entered. Many locals or tourists that would like to enjoy a morning bath will go to the bathhouse after hearing the sound. The drum is also struck at noon and the evening to mark the time of day.

If you're planning a trip to this part of Japan, check out some of the other beautiful hot spring areas too! We have all you need to know in our guide to 7 Amazing Hot Spring Areas in Shikoku.

Located in Nagano Prefecture, Rekishi no Yado Kanaguya is the most famous historical hot spring hotel on Shibu Onsen Street. This Japanese bath house opened its doors back in 1758, and spent a fortune to build a four-story accommodation for guests called "Saigetsurou" in 1936. This wooden building is uniquely designed and truly spectacular, and the solemnity of its temple-like appearance is similar to the Spirited Away bathhouse, and is considered to have served as a main source of inspiration for the animated film.

The striking Saigetsurou is filled with the ingenuity of the craftsmen at the time. Examples include the third-floor corridor window frame which incorporates the design of a water mill gear, as well as the window frame of the staircase corridor that is designed in the shape of Mt. Fuji, complete with a hanging lantern symbolizing the full moon.

It is worth mentioning that all the 29 guest rooms have different room designs and layouts, with some furnished as a standard Japanese-style room, and others equipped with stained glass. All the rooms are full of Japanese elements, making one want to visit again and again.

Kanaguya’s hot spring water comes from 4 different sources, and you can choose from 3 common bath areas and 5 reserved baths. The hot spring water here contains a high concentration of iron, which is effective in moisturizing the skin. With arched windows, cypress decor, and other interesting elements, this unique age-old hotel can bring you back in time.

Located in Japan's alps, Nagano is a stunning part of Japan. If you're heading to this area for skiing or hot springs, check out our guide to the top 10 Must See Places in Nagano!

Located in Okayama, Aburaya was established in 1688. The main building offers private hot spring baths where you can enjoy having the onsen all to yourself. The annex building houses an outside garden bath, an open-air bath, a private bath surrounded by lush green scenery, and communal baths for men and women. The half open-air male communal bath is made with stone, while the open-air communal bath for females is made with cypress wood.

Animators used the building's original design from the Meiji era as a model for the Spirited Away bathhouse. Back then, there were a lot of guest rooms, but after it was renovated during the Heisei period, only the restaurant on the second floor and the open-air bath remained the same. Only one room on the third floor is currently available for guest accommodation.

In the film, Sen crosses a bridge with red railings before entering the bathhouse. The design of the bridge was inspired by Sekizenkan Honkan in Shima Onsen, Gunma Prefecture. The bridge in front of Sekizenkan has low red railings, and it feels like you will enter the mysterious world of Spirited Away if you hold your breath when crossing the bridge.

Sekizenkan is the oldest hot spring hotel in Japan, and is also an important cultural property of Gunma Prefecture. The imposing wooden building is nestled in a serene mountain forest with a mysterious atmosphere. In addition to the bridge on the outside, there is an arched tunnelway inside Sekizenkan that is similar to the one seen in the film. The wooden walkway and sliding paper doors are also reminiscent of the staff room where Sen and the others live.

For those wanting to know more about the story of Sekizenkan, you can join the guided tour by the hotel owner to learn more about the history, architectural structure of this Japanese bath house as well as the world of Spirited Away. Note that you can only join this tour if you plan to use the hotel's baths.

Sekizenkan has well-established hot spring facilities, amongst which the Ganroku no Yu is the most famous, having been recognized as a tangible cultural property. Rays of sunshine beam onto the Romanesque building through the large glass windows of the high ceiling, making it a real treat to bath here. There are also different kinds of hot spring baths, such as the outdoor bath and rock bath, so one can fully enjoy the pleasure of bathing in multiple ways.

Located in Tokyo within Koganei Park, Edo-Tokyo Open Air Architectural Museum is a place where historical buildings with high cultural value that are difficult to preserve in their original locations are relocated to and displayed to the public after being reconstructed. It is easily accessible to tourists, making it a sightseeing hot spot.

Within the museum's perimeters lie Kodakara Yu, a Japanese bathhouse called Kagiya, a uniquely designed bar; and a stationery store called Takei Sanshodo. All of these buildings were important sources of inspiration for the Spirited Away bathhouse.

Kodakara Yu looks like a solemn shrine from the outside, which is the unique style of Tokyo sento (communal bathhouses) built after the Great Kanto Earthquake in 1923. There is a mural with paintings of Mt. Fuji, lakes, and the sea on the walls of the bathhouse. Those who want to experience the Japanese sento culture can come here for a bath.

Kagiya is an izakaya (Japanese-style pub) which served as the backdrop for the scene where Sen’s parents become pigs after eating too much in the movie.

Takei Sanshodo is a stationery store founded in the early Meiji period, with drawers full of products covering its walls. It is said to be the inspiration for Kamaji’s boiler room.

Located in the Meguro area of Tokyo, Gajoen is not only a hotel, but also a wedding and dining venue. You can witness the meticulous craftsmanship of the Showa era through the luxuriantly carved pillars made from heritage trees, as well as the lavish ceilings, walls, and glass windows.

If you didn't realize it already, Gajoen is the prototype for the Aburaya banquet hall in Spirited Away! You can take a tour inside the building by contacting them in advance, or by dining and staying at the hotel. If you want to experience the nightlife of the spirits in the film, make sure to visit Gajoen!

With its metropolitan image, you might not think that Tokyo is full of great hot spring retreats. There's actually a lot of hot springs and Japanese bathhouses to enjoy in Japan's capital! Read our guide  to 12 Lodgings with Hot Springs in the Tokyo Area!

Although not confirmed officially, it is said that a relative of Hayao Miyazaki once worked as an okami (female manager) at this hot spring hotel in Kanagawa Prefecture. Hayao Miyazaki spent some of his childhood here, which certainly impacted the creation of My Neighbor Totoro, Spirited Away, and Howl’s Moving Castle. There is a “Totoro tree” in the spacious garden of Jinya, which is believed to be the tree Hayao Miyazaki climbed and played on as a child, serving as a source of inspiration for the animation.

Near the Totoro tree, there is a fountainhead that was the first to obtain authorization as a source of drinking water in Kanagawa Prefecture. The water is rich in calcium, which is believed to be good for the stomach, and tastes like an unsweetened sports drink. The hot spring water used for bathing here also contains high levels of calcium. Relieve your travel fatigue in the baths here!

Get Spirited Away to a Japanese Bathhouse!

If you want to soak up the peculiar atmosphere of Spirited Away in the real world, add a stay at one of these magical Japanese bathhouses to your travel plans!

If you love the idea of hot springs, but struggle a little with the idea of being nude in public, you don't need to miss out! Read our guide 12 Japanese Hot Springs You Can Dip In With Swimsuits and enjoy the best of both worlds.