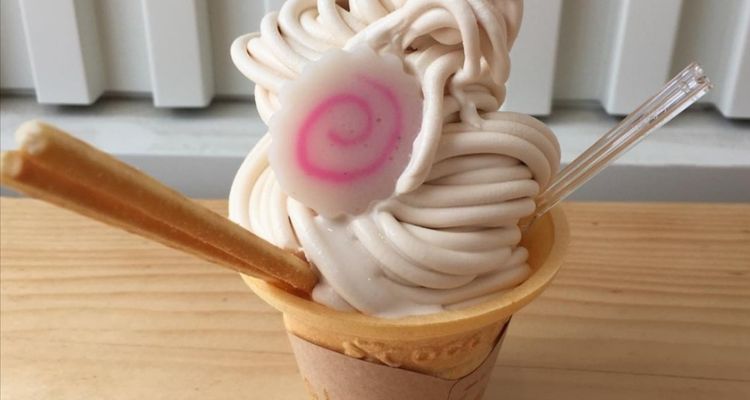 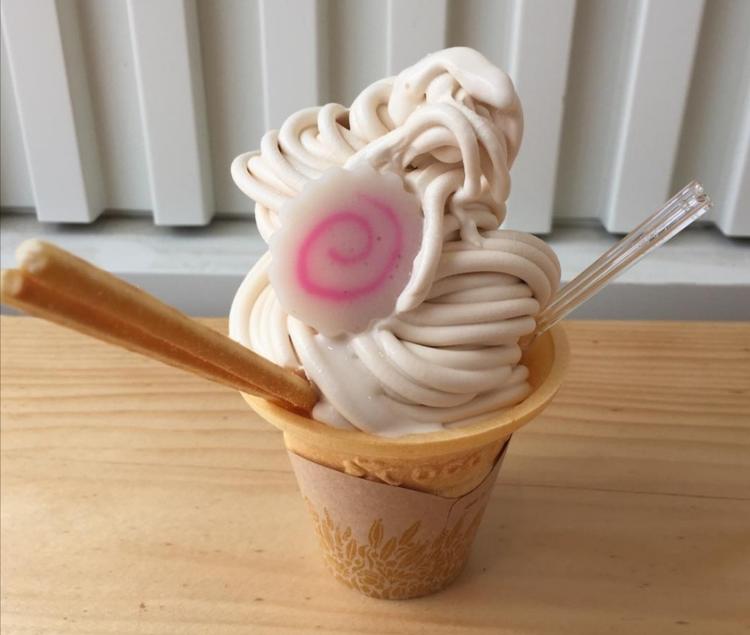 13 Japanese Ice Creams with Surprising Toppings and Flavors: From Fried Oysters to Soy Sauce and More!

There is a huge variety of ice cream flavors in Japan. There are classic flavors like green tea that are a guaranteed hit, but there are also many regional ice cream flavors known for their unique appearance and unexpected ingredients, like soy sauce and wasabi! Many of these are spread out all throughout Japan, and are created to showcase local specialty products. Read on more to see what type of unique creations you can find! This can be purchased at Gomi no Ichi, a local fish market in Hinase, Okayama. The fish market sells fresh, seasonal seafood from the Seto Inland Sea at quite reasonable prices, and the town in itself is especially known for its oysters! The soft serve is served with two deep-fried oysters which are then topped with soy sauce. The recommended way to eat this is to take a piece of oyster and dip it into the ice cream.

Shirasu, or boiled whitebait, is a popular ingredient used in many different Japanese dishes. It's often eaten on top of rice, but you'll even see it in pasta or pizza! It has a subtle salty flavor, which results in a salty and sweet combo. It's sold in a few places around Japan, including Enoshima, Shizuoka, and Nagoya. The soft serve in the picture above can be found in the store Kitasan Chaya in Enoshima. Although the ice cream is gray-colored, it's actually vanilla!

This cup version is sold at the Shiomisaka roadside rest area in Shizuoka, which is the number one production area for shirasu. Scallion slices are garnished on top along with the shirasu, which adds an extra element to the overall flavor. With an appearance akin to the luxurious Mont Blanc dessert, this soft serve exudes the nutty aroma of buckwheat (soba). While the flavor in itself is not considered uncommon throughout Japan, its noodle-like presentation is impressive, looking just like the famed noodle dish! Look for this at the Urabandai rest area in Fukushima. Speaking of noodles, do you know what the specialty food of Kagawa Prefecture is? Anyone in Japan would tell you it's udon! At Shoyumame Honpo in Kagawa, you can find this soft serve that looks exactly like kamatama udon (udon noodles without broth) - you'll probably have to do a double take! It's also dressed in soy sauce and green onions, just like udon! While we're still on the topic of noodles, we can't forget about ramen! If you're in Furano, Hokkaido and you're feeling like eating some noodles, Yuki to Hana is a shop that's famed for their tasty noodle dishes. And for dessert, you can order this ramen soft serve! The "noodles" are thin and flavored with the same soy sauce used in their soy sauce ramen. It's topped with a real fish cake swirl and some pretzel sticks to represent chopsticks! Nissin Chikin Ramen is a very famous chicken ramen brand. It was created by instant ramen inventor Momofuku Ando at his home in Ikeda, Osaka, where you can also find the Momofuku Ando Instant Ramen Museum! If you head over to the Ikeda City Tourist Information Center, you'll be greeted by a few decorations of the cute chicken mascot of this ramen. They also serve a special item made with Chikin Ramen called "Chiki-chiki Soft Serve." The ice cream comes with caramel sauce and a flourish of crispy chicken ramen flakes.

Have you ever imagined topping your ice cream with an asparagus stalk? Hirata rest area in Fukushima serves asparagus-flavored soft serve with a big piece of asparagus sticking out of it for a limited time during asparagus season. Since Fukushima is the leading asparagus producing region in Japan, it only makes sense that they came up with this creation! One of the most famous local crops in Hyogo's Awaji Island is onion. The sweet local onions are featured in foods all over the place, like this soft serve! Besides the fact that it's ridiculously photogenic with its gorgeous curves and smooth texture, it doesn't look too special. One bite, though, and you'll get a whiff of onions and taste the distinct sweet and spicy flavors attributed to onions! It's actually made with super tiny pieces of onions inside, so the onion taste is very apparent. (Tip: Try the Awajishima Burger and look for the giant onion statue in town while you're at it!) Kanazawa is famed for its gold leaf, which is often found sprinkled in all types of food around the prefecture. Many stores sell ice cream covered in a thin sheet of this gold leaf, or even sprinkled with flakes! It's been gaining a lot of attention in the last few years in Japan for its unique, sophisticated look. Ever thought of eating seafood with your dessert? At Uono no Sato, a souvenir shop in Niigata, there's a shrimp soft serve! Its topped with two shrimps, a dusting of a special miso soup powder, and a piece of rice cracker. By the way, this store also has a yomogi (mugwort) flavored ice cream that's topped with locusts... Which one would you choose? Seafood or bugs? In Yokohama Hakkeijima Sea Paradise, there was a store that served "Monja Ice Cream" based on the Japanese dish monjayaki. Monjayaki, to put it simply, is pretty much a less solid version of okonomiyaki, and is made with many similar ingredients. If you've ever had okonomiyaki or monjayaki, imagine all the sauces and toppings used on that savory pancake, but on ice cream instead. Mentai Park is a unique mentaiko (spicy cod roe) themed amusement park with locations in Aichi, Ibaraki, Hyogo, and Osaka. There's a museum, retail shop, factory, and food corner all based around mentaiko! In the food corner, they have rice balls as well as soft serve made with it as well. It has a satisfyingly spicy kick, and it even comes with a rice cracker.

You probably know soy sauce from sushi, and if you're a fan of Japanese food, you've definitely had it since it's an essential core ingredient in Japanese cooking. But does it work with ice cream? As we're discovering in this article, salty and sweet is a delicious combo, so you shouldn't write it off entirely based on just that. As seen in the kamatama udon soft serve above, it's actually a flavor that's available in various places all throughout Japan. One place you can find it is in the Kikkoman Soy Sauce Museum in Chiba.

Another ingredient commonly associated with sushi. Unlike other spicy foods, wasabi has a burning spicy punch that hits you in the nose, but fresh wasabi is actually really different from the types you usually have from the store or at restaurants. Shizuoka produces a massive chunk of all wasabi grown in the country, so what better place to try fresh wasabi on (or in) ice cream? It's available in other areas of Japan too!

Were you surprised by any of these ice creams? There are so many more interesting flavors to discover out there, and they're always coming out with more, so keep your eyes peeled during your travels for some rare and peculiar soft serve flavors!