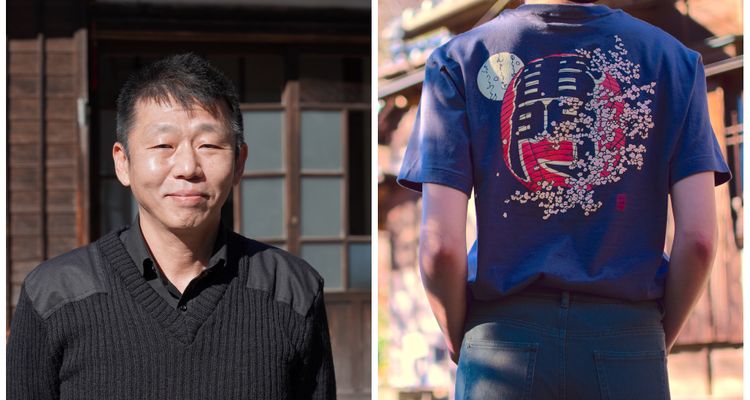 The best way to learn about a country is by getting to know the locals. With our new interview series “People of Japan,” we’ll bring you even closer to Japan by introducing business owners, cultural ambassadors, and all-round amazing people in the country bonded by strong passions. In this article, we'll be featuring Makoto Komai, an artist based in Shizuoka Prefecture who has specialized in printed T-shirts for more than 25 years. His goal is to bring the charms of traditional Japanese art into people’s lives in a familiar and accessible format—T-shirts. Read on to learn more about his business and the amazing wearable art that he creates.

On a quiet mountain road in the mountains of Nishi-Izu, Shizuoka Prefecture, sits a 100-plus-year-old “kominka” (traditional Japanese house) that is both the home and workshop of Makoto Komai, an artist who has been designing and printing Japanese “art T-shirts'' for more than 25 years.

If you’ve traveled through Narita Airport in the past and stopped to browse in one of the shops, you might have even come across Makoto's work. Until the borders were effectively closed to international travelers in 2020, a shop in the airport stocked his shirts, where they were quite popular among travelers looking for a memento of their time in Japan. Times have changed, but Makoto continues to run his business, called WAJIN, all by himself, bringing Japanese art closer to people's lives by delivering it in a familiar format.

From Backpacker to Artist

Makoto didn’t always plan to be an artist. When he was 20, he set out to explore the world as a backpacker, without any solid plans for his future career. To fund his travels, he would bring back art and other treasures that he found abroad and sell them in Japan. In this way, he spent nearly 10 years traveling as a backpacker, gaining valuable insights into other cultures, but also realizing some important things about his own culture in the process.

After spending so much time sharing the art of other cultures with people in Japan, Makoto realized that Japanese art also has a unique and special value worth sharing with other cultures. This, along with the desire to make his own art instead of selling someone else’s, spurred Makoto to begin creating Japanese designs and silkscreen-printing them onto T-shirts—something that no one else was doing at the time.

From Flea Markets to a Fully-Fledged Business

Despite not attending art school or receiving formal artistic training, Makoto’s natural artistic ability shone through in his designs, and numerous people happily paid for his work from the beginning. At first, he started selling his shirts at weekend flea markets and other temporary pop-up venues, but his work soon caught the attention of a retailer, who approached him about selling his shirts in their store.

From here, most of his business shifted from direct sales to consignment, with his biggest break being a shop in Narita Airport which stocked his entire line of T-shirts in all sizes. At the peak of his business before international travel ground to a halt in 2020, Makoto estimates that he was selling around 2,000 shirts each month.

He also shifted to exclusively using T-shirts from a Tokyo-based company called Kume, which manufactures the shirts (down to the weaving of the fabric itself) right here in Japan. As you can imagine, the shirts cost a great deal more to produce than the majority of T-shirts in the world, but the impeccable made-in-Japan quality is something that is important to Makoto. As he put it, “Once more people visiting from overseas began buying my shirts, I felt it was important to provide a product that fully represents the best of Japanese craftsmanship in all aspects [not just the print].”

We asked Makoto to describe the process of creating a new design. He told us how in the beginning, he has only a vague image in his head of something he wants to convey. He then goes through a process of creating a composition by gathering bits and pieces of inspiration that fit his vision, be it photographs, old Japanese artwork, patterns in a magazine, or drawings.

“At first, there’s nothing, but as I go along from one flash of inspiration to the next, I eventually arrive at something that expresses the initial image I had in my mind. For example, if I’m creating a picture of a goldfish, I don’t necessarily intend to draw a goldfish from the start. When I first saw the goldfish, there was a feeling—something about it was attractive, or mysterious, or beautiful—and this initial feeling that I wanted to convey never changes throughout the process. But, the elements of design and the way that they eventually go together are things that I decide as I go along.”

Once he arrives at a composition that evokes the original inspiration and feeling he wants to convey, Makoto scans his hand drawings of each element into his computer, where he can make positioning and scaling adjustments before finalizing the image. From here, he needs to translate the drawing into three separate stencils—one for each layer of color in the print—which are sent to a company that manufactures the screens used for screen printing.

While he could use the illustrating software to directly draw the stencil lines over his original drawing, Makoto prefers to first draw the stencil lines by hand before tracing over them again with the software. “I really want my hand-drawn lines to show through in the final print. If I tried to use a mouse to draw the lines directly, it just wouldn’t have the same feeling.”

Once the stencil templates are finished, they are sent to be made into screens for screen printing. Makoto’s designs are typically composed of 3 layers in 3 different colors. He mixes the ink by hand each time he prints, making each batch of shirts ever so slightly different. However, this is one of their charms and something you can’t get with a typical mass-produced t-shirt.

Overall, Makoto’s designs vary wildly from one another, featuring differing subjects, colors, compositions, and even style. However, all possess an authentic Japanese aesthetic that provides a way for people to incorporate Japanese art into their daily lives. Looking at Makoto’s work, the reason he calls them “art T-shirts” becomes abundantly clear.

They’re not at all like the cliche designs one often finds on discount at a cheap souvenir stall somewhere—they are full of life and brimming with Makoto’s passion. You could just as easily imagine them framed as a decoration on the wall.

Looking through Makoto’s designs, one of the noticeable recurring themes is Buddhism, as many designs feature various Buddhist deities and symbols. When we asked Makoto about this, he explained that he particularly enjoys making Buddhist artwork, as it exists in a different world from the Edo period artwork that most associate with Japan. Of course, he also makes some designs in the iconic Edo style, but he personally loves the calming and beautiful aesthetic of Japanese Buddhist artwork.

Over the years, Makoto has made many designs, and he continues to create new ones each year. He described how difficult it is to tell which ones will become popular, as sometimes the ones he personally likes the best end up hardly selling at all. Over time, the line of designs that Komai-san has offered has gone through an organic, survival-of-the-fittest type shuffle, where the popular designs remain while the unpopular designs go out of print. Surprisingly, one of his oldest designs of a goldfish dating back more than 20 years has remained popular to this day, proving that his art can stand the test of time.

Makoto’s Hope for the Future

As noted above, the shop in Narita Airport that used to stock Makoto’s entire collection and accounted for a large portion of his sales closed down after international travel to Japan was essentially suspended in 2020. Prior to this, Makoto did have his own website that included an online store, but as brick and mortar stores were the main part of his business, he hadn’t put much effort into promoting it until recently.

However, the website has become the focus of his current sales efforts, and he is beginning to experiment with other creative ways to get the word out about his art T-shirts. One such endeavor is a Kickstarter campaign, for which he partnered with tsunagu Japan Crowdfunding, designing a set of three new T-shirts each representing a famous temple in Japan. He hopes that the project will be a way for people to discover his brand while also serving as a nostalgic reminder of their travels to Japan.

*You can check out the crowdfunding project here

Introducing people to the charms of Japanese art through his T-shirts is what inspires Makoto to keep going. He wishes to connect with more customers through the internet in the future to continue his passion. “With my art, I hope that people will discover a new way to enjoy something old. It makes me happy when people can feel free to interpret the art and make it a part of their lives.”