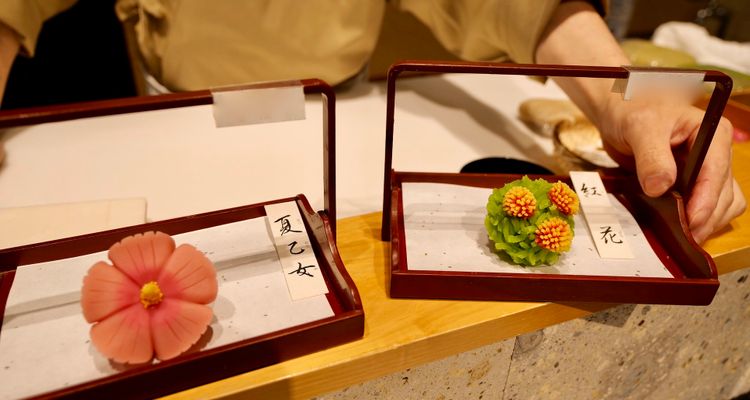 "Wagashi" is an umbrella term for traditional Japanese confectionery. Though many varieties of wagashi exist, one of the most memorable is "jo-namagashi," which look like little works of art and commonly make an appearance in Japanese tea ceremonies. In this edition of our deep-dive "Culture of Japan" series, we explore the artistic world of jo-namagashi under the tutelage of Tsuruya Yoshinobu, a Kyoto-based professional Japanese confectionery shop. If you've ever wondered how to best enjoy traditional Japanese sweets, this article is a good starting point!

What Exactly Is Wagashi?

“Wagashi” literally translates to “Japanese confectionery” and covers a wide variety of traditional local sweets. Although there are several ways to categorize wagashi, a common way is to break them down into three categories: “jo-namagashi,” “namagashi” and “han-namagashi,” and “higashi.”

“Jo-namagashi” refers to soft sweets made with high-quality ingredients. They often have stunning appearances that represent the seasons. “Namagashi” and “han-namagashi” are more everyday sweets that also tend to have chewy textures. They have simpler appearances in comparison to jo-namagashi. Finally, there’s “higashi” which literally translates to “dried confectionery.” It references harder sweets such as hard sugar treats and rice crackers.

Over the years, wagashi has evolved and the variations have continued to increase. Early versions of wagashi were simple treats that utilized the sweetness of fruits, with fried bites developed from Chinese influence following shortly after. More variations came into existence as Japan’s food culture continued to mature, but it wasn’t until the Edo period (1603 - 1867), when sugar became more widespread, that the varieties we know today, such as jo-namagashi, came to be.

Although holding an undeniable presence in Japanese culture, the popularity of wagashi is dwindling in favor of Western desserts and treats, and there are many Japanese people today who cannot name wagashi other than everyday treats such as “mochi” or “dorayaki.” Despite this saddening trend, we believe that more nuanced wagashi such as “jo-namagashi” will withstand the test of time and the trying modern market with their artistic appearances and gentle flavors impressing many who get the opportunity to try them.

Eager to learn more about these edible works of art that can and have withstood the test of time, we reached out to learn from an expert at the Nihonbashi, Tokyo branch of Tsuruya Yoshinobu, a Kyoto-based confectionery shop. We were readily welcomed by Yasukazu Umezu, a professional Japanese confectioner at Tsuruya Yoshinobu who has been practicing his craft for over 40 years.

As we have a wagashi enthusiast on staff, we were thrilled to get to try some jo-namagashi from an established confectionery shop. However, even she thought that intricate jo-namagashi with seasonal designs were limited to “nerikiri.” We were surprised to learn from Tsuruya Yoshinobu that there were actually numerous types of jo-namagashi that come in seasonal designs, and that they specialized in one particular type called “konashi.” In fact, nerikiri is actually the Edo (modern-day Tokyo) variation of konashi, which originated in Kyoto during the Edo period and subsequently made its way east.

Tsuruya Yoshinobu’s origins in Kyoto make it one of the best places in Tokyo to try the Kyoto-style sweet. Umezu explained to us that although extremely similar in appearance and texture, there are slight differences between konashi and nerikiri, and that the names of these sweets actually refer to the ingredients used. While both utilize white bean paste for their bases, konashi is mixed with a fine rice powder from the Kansai area called “joshinko” and wheat flour to give it a lighter, more nuanced flavor and softer texture in comparison to its cousin. Meanwhile, nerikiri is made with ingredients such as Japanese yam and sugar which give it a sweeter flavor.

He also noted that there were differences in how they were supposed to be eaten as well: konashi is meant to be enjoyed with a drink of matcha, as it brings out the flavors of the tea. Nerikiri, on the other hand, can be consumed either with a beverage or on its own.

Jo-namagashi are typically made with softer ingredients, so they are fairly easy to shape and mold into miniature pieces of art. One key ingredient in jo-namagashi is bean paste which is not only soft, but light enough to be enjoyed by even those who lack a sweet tooth. It can be made from red or white beans and is generally considered a sweet treat in Japan in contrast to its savory reputation in the West.

Paste made with white beans (“shiro an” in Japanese) is most commonly prepared to be completely smooth, while the texture of red bean paste (“anko” in Japanese) can range from “koshian” (smooth bean paste) to “tsubuan” (mashed bean paste). If you do not like the sensation of bean skin or bits of bean, Umezu recommends asking for something with koshian. However, if extra texture is your preference, tsubuan is the way to go. There is also a difference in flavor - white bean paste has a lighter flavor, while tsubuan accentuates the taste of the beans.

The exterior of jo-namagashi can also vary, including smooth coats made from bean paste, “gyuhi” (thin pieces of mochi), or “kinton” (strips of bean paste). There is little variation in flavor, but you can enjoy differences in texture depending on the preparation. Creations made completely with koshian easily disappear in the mouth, while jo-namagashi treats with a kinton exterior have a little more texture. Meanwhile, although gyuhi also has an extremely light flavor, its chewiness offers a delightful contrast to the soft bean paste fillings.

Visual Representations of the Four Seasons

Jo-namagashi are often sculpted into forms that represent the four seasons, taking inspiration from the lush, ever-changing nature of Japan. There can even be multiple variations served within a season, honing in on the intricacies each season has to offer. Seasonal jo-namagashi are often served slightly ahead of the period they represent, allowing people to enjoy and experience the beauty of the seasons. If there is a specific time period or design you would like to experience yourself, try to get there a bit ahead of the season, or check what will be available when you are planning on visiting.

Tsuruya Yoshinobu is no exception when it comes to expressing the beauty of the four seasons through their konashi. When we visited the shop in mid-July, the designs were focused on the vibrant foliage of the summertime, including three designs centered on flowers and one offering a visual reprieve from the heat with “water droplets” balanced on a bamboo leaf. It was fascinating watching Umezu go through each step to create every detail by hand, from the creases of the petals to the careful placement of the “nioi” (the accents on the wagashi such as the pistils). The amazing attention put into each piece helped us appreciate their beauty more and made them almost difficult to eat, as they were so lovely to look at.

Although jo-namagashi have common seasonal design staples such as hydrangeas during the summer or autumn leaves during the fall, the appearance and taste are often up to the discretion of the confectioner, with many constantly conjuring up new creations inspired from anywhere in the world.

A Staple in Japanese Tea Ceremony

Although not overtly sweet like most Western desserts, jo-namagashi still have a lingering sweetness that pairs exquisitely with slightly more bitter beverages such as matcha. As mentioned above, konashi in particular are meant to be eaten with matcha, as the sweetness of the konashi covers your palate and accentuates the natural, grassy flavor of the tea. Hence, jo-namagashi are often served before the matcha during Japanese tea ceremonies.

However, you do not need to participate in a full-fledged ceremony in order to be able to enjoy a taste of jo-namagashi and matcha. There are numerous establishments around Japan that allow customers to leisurely sit and try these Japanese delicacies, such as Tsuruya Yoshinobu, as well as many Japanese wagashi shops that sell individual pieces.

Furthermore, Umezu explained to us that while tea ceremony practitioners follow rigid routines in terms of order of consumption and handling of the sweets, when enjoying wagashi during one’s private time, it is important to consume it in such a way that is enjoyable for the individual. Whether you would like to enjoy the jo-namagashi first, the matcha first, or take alternating tastes, you should indulge in a way that best suits your palate and gives you the most pleasant experience.

How to Get the Most Out of Your Jo-Namagashi

Jo-namagashi are traditionally eaten with “yoji,” which are toothpick-like utensils that are commonly made from wood, bamboo, or metal. Umezu told us that in order to fully appreciate the intended taste, it is best to cut along the indents of the namagashi as neatly as possible. Some jo-namagashi cut more cleanly than others depending on their ingredients and designs, but do not fret if your pieces have trouble staying together, as long as you are able to savor each component.

Umezu also advised us to not wait too long to eat our jo-namagashi, as the ingredients do not take long to dry out, which alters the texture of the treat and can ultimately lower the overall quality. They are best when eaten fresh, so when you get your own little masterpiece in front of you, be sure to not take too much time snapping photos so that you can promptly indulge in the delicious confection!

Tsuruya Yoshinobu - Enjoy Jo-Namagashi Made Right in Front of You

Tsuruya Yoshinobu is a Kyoto-based confectionery chain with a history that dates back to the early 19th century. It has served influential Japanese clientele during its centuries-long run, including the Kyoto Imperial Palace as well as high-ranking Japanese tea ceremony masters.

Its TOKYO MISE branch hosts a “tea room” where patrons can enjoy a freshly-made sweet crafted right in front of their eyes as well as a delectable bowl of matcha. These jo-namagashi treats are designed by Umezu himself and their designs are changed twice a month to reflect the evolving seasons. Patrons can choose their preferred design among a selection of four to savor with a drink.

If you are interested in the world of wagashi, Tsuruya Yoshinobu is the perfect place to learn about the nuances of the confection and be able to taste these traditional sweets in a calm, relaxed atmosphere. They welcome anyone who has an interest in jo-namagashi, from beginners to enthusiasts.

With their beloved, nostalgic flavors and the meanings behind their designs, jo-namagashi are the perfect way to experience Japanese culture in a scrumptious bite. We highly recommend indulging in this quintessential Japanese treat with matcha, another iconic Japanese flavor, to get the full experience.