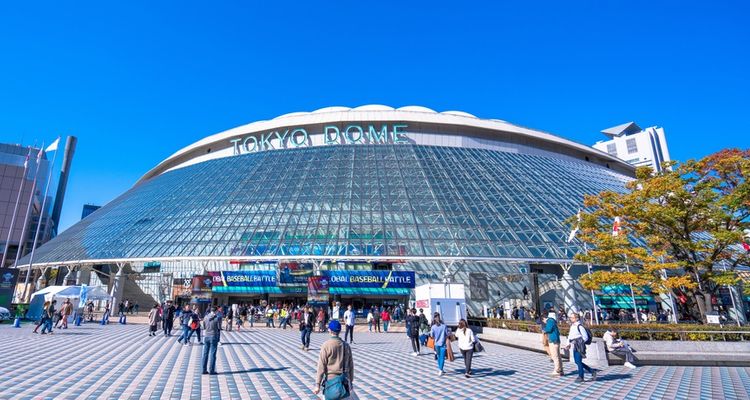 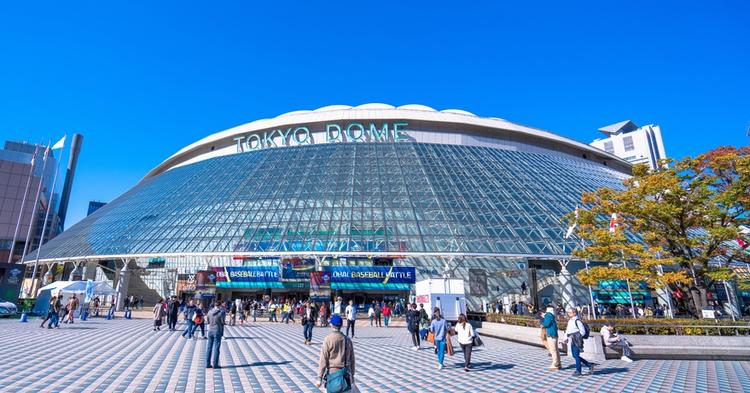 The Tokyo Dome, which opened in 1989, was the first dome stadium built in Japan. Following in the footsteps of Tokyo, other prefectures like Fukuoka, Osaka, Nagoya and Hokkaido also built their own dome stadiums. With capacities of tens of thousands of people, these stadiums are used for baseball games and large-scale concerts. For many sports fans and music lovers, it's a bucket list goal to attend an event at one of these stadiums in Japan. If that describes you, read on to find out all you need to know about the 6 major dome stadiums in Japan!

How Many Dome Stadiums Are There in Japan?

The opening of the Tokyo Dome in 1989 was followed by the Fukuoka Dome in 1993, the Osaka Dome and Nagoya Dome in 1997, and finally the Sapporo Dome in 2002. Together, they are generally known as Japan’s 5 major domes. The remodeling of the 6th dome, Saitama's Seibu Dome (officially the MetLife Stadium), was completed in 1999. But due to its semi-open roof, Seibu Dome is slightly different from Japan’s typical dome stadiums, which is why people seldom think of the Seibu Dome when they talk about “the 5 major domes”.

Aside from baseball games, many popular international and Japanese singers have held concerts at these stadiums to audiences of tens of thousands people. A concert tour that is held only at dome stadiums is called a “dome tour”, and having a dome tour is proof of a performer's popularity, which is why the domes mean so much to music fans.

The total floor area and approximate capacities of the 6 major domes are as follows:

*The actual capacities may vary from the above table depending on the requirements for different events.

Tokyo Dome was the first dome stadium in Japan and is the home ground of the Yomiuri Giants baseball team. Conveniently located in the heart of Tokyo, the stadium is surrounded by department stores, amusement parks, a city hall, restaurants, hotels and other facilities. Together, they make up a greater entertainment complex known as Tokyo Dome City. Visitors can shop to pass time before an event, or avoid the crowds after by grabbing dinner here before taking the train or bus home. For this reason, the Tokyo Dome is a popular venue for not just professional baseball games and concerts, but also international sports like basketball, American football and professional wrestling. Its evening illumination event in winter is very popular as well.

Tokyo Dome boasts a huge footprint, with two underground floors and six floors above ground. Its dome-shaped roof is an inflatable elastic membrane. To maintain its shape, the air pressure inside the stadium is 0.3% higher than that of the outside, which explains why people encounter strong gusts of winds at the stadium's exits. The air pressure is also the reason that Tokyo Dome has the most home runs among all stadiums in Japan.

It only takes 10 minutes to travel from Tokyo or Ikebukuro Station to Korakuen Station on the Marunouchi Line, and 15 minutes from Shinjuku to Suidobashi Station on the Sobu Line. With several stations nearby and frequent trains, Tokyo Dome is the most central of the six major domes.

Fukuoka PayPay Dome is the home stadium of the Fukuoka SoftBank Hawks baseball team. It is located near the coast, around a 15-minute walk away from the closest subway station. Next to Fukuoka PayPay Dome is a selection of shopping malls and restaurants, as well as the Hilton Fukuoka Sea Hawk hotel, OPA department store, baseball souvenir store DOGOT, and the Sadaharu Oh Baseball Museum, which is a must-visit for baseball fans. You're unlikely to get bored waiting for the game to start!

Fukuoka PayPay Dome is a stadium with nearly no blind spots. Whether you are watching a ball game or a concert, you can see everything clearly from almost any angle. What is so special about Fukuoka PayPay Dome is that it is Japan's first and only stadium featuring a retractable roof. However, opening the roof takes twenty minutes and costs 1,000,000 yen (including electricity and labor costs) every time, so it is only opened during pre-game training and when the SoftBank Hawks win a match.

You can take the bus at Tenjin, Hakata Station, or Fukuoka Airport, and alight at PayPay Dome, Kyushu Medical Center, or Hilton Fukuoka Sea Hawk (you can find information about specific bus routes here). A direct shuttle bus service is also available during large events like sports tournaments and concerts, but take note of the time of the last bus. It's best to line up at the bus stop as soon as the event is over.

Kyocera Dome Osaka is the home field of the Orix Buffaloes baseball team, but during the summer Koshien baseball tournament, it is lent to the Hanshin Tigers as their temporary stadium. Kyocera Dome Osaka is shaped like a giant UFO with a silver, futuristic wavy edge and a rounded roof that looks very impressive from the inside. With an underground floor and nine floors above ground, it is the tallest among all domed stadiums. However, due to limited space, there are only two levels of viewing platforms in the outfield area, resulting in quite a lot of blind spots. The outer walkway is also not wide enough, so entering and leaving the field is quite time-consuming.

Kyocera Dome Osaka is located in Nishi-ku, Osaka, right next to the Osaka Gas Building. The dome was built together with a big shopping mall, which was later rebranded as an AEON shopping center. You can go there for a meal or some shopping before the event starts.

It's worth mentioning that due to its geographical location, people living nearby may experience shaking when more than 50,000 people are jumping together inside the stadium. When there is a concert you will likely see some “no jumping allowed” signs posted around the neighborhood. You might want to keep this in mind when considering buying a ticket.

Visitors can also take the Osaka City Bus to the Taishobashi bus stop and walk for 6 minutes to the stadium.

Nagoya Dome, the home field of the Chunichi Dragons baseball team, may not seem as flashy as some of the other domes in this article. In reality, it's actually a great stadium that's perfect for watching ball games and concerts thanks to its blindspot-free design, wide seats, Wi-Fi, large electronic scoreboard, spacious car park, convenient transport options, and the AEON shopping center nearby. The only shortcoming is that the location is relatively far away from the city center, which means the nearby shopping center can get very crowded on event days. If you are going for a concert, you may want to buy some concert merchandise at the dome in the morning. After that, you will have to go back to the city to pass time and have dinner before returning to the stadium at nightfall, which is quite a time-consuming detour.

The mascot of the Chunichi Dragons is a blue koala named Doala, who is well-known for goofy character traits like undergoing hemorrhoid surgery and having his salary reduced because of his awful back-flips. If you like Doara, make sure to stop by the baseball souvenir store near Nagoya Dome for his merchandise. You may get to see him during baseball games as well!

Since there are only two stations nearby, people have to queue to get into the train station after an event. Luckily, with crowd control implemented by station attendants, the trains don't get too crowded. And with a large car park not far away, some people may choose to drive to the stadium instead of taking the train, which certainly helps clear the crowds.

Hokkaido’s Sapporo Dome is an amazing stadium used for baseball and soccer. It is the home stadium of the baseball team Hokkaido Nippon-Ham Fighters and the association football club Hokkaido Consadole Sapporo. Baseball games are played on an artificial turf field, while soccer matches are held on a grass pitch using the world’s first "hovering soccer stage". When there is no soccer match, the grass pitch is lifted up with cushions and slid out of the stadium with wheels for maintenance.

Another feature worth mentioning is that the seats retract automatically when the stadium’s movable doors open. Whenever the soccer pitch moves, the retractable seats will tilt to an angled position perfect for watching soccer or baseball matches. And once the movable doors close, the seats will return to their original positions.

Sapporo Dome also has Japan’s first-ever dome observatory, where you can overlook the stadium and the city of Sapporo from a height of 53 meters. When there is no baseball match or concert, you can join a paid stadium tour to visit normally closed-off areas like the training field and the locker rooms. For more information, check out the event schedule on the official website.

The Sapporo Dome can be accessed by:

During large events, shuttle bus service is available to help clear the crowds. You can get on the bus at:

For the return trip you can take a shuttle bus (210 yen) at the bus stop in the Sapporo Dome area. There are also highway buses that depart from New Chitose Airport and city buses that leave from the Sapporo city area, so transport should not be too inconvenient.

When Saitama’s Seibu Dome was opened in 1979, it was without a roof and called Seibu Lions Stadium. In 1998, with the completion of the semi-open roof, the stadium was renamed MetLife Dome, though it is still more commonly known as the Seibu Dome. The semi-open roof makes it the only dome where a ball can actually be hit out of the stadium! It's also the only dome where a game can be delayed due to rain.

Audiences should also pay attention to what they wear to the game or concert, as it can get quite hot in summer and cold during winter without air-conditioning.

Inside the Seibu Dome, there is a special open grass field with free seating, where people can spread out a picnic blanket and enjoy the food they bought from the vendors nearby. Although no shopping malls are nearby, there are quite a lot of sightseeing spots you can visit, including Totoro Forest, a ski resort, and a golf course.

Seibu Dome is accessible via the Seibu Dome-mae Station on the Seibu Railway Sayama Line or Yamaguchi Line.

While the Sayama Line itself is short, you can transfer at Nishi-Tokorozawa onto the Seibu Ikebukuro Line, which runs to Ikebukuro, as well as some trains with direct service to the Tokyo Metro Yurakucho Line or Fukutoshin Line; these subway lines reach places like Shin-kiba, Shinjuku, Shibuya, and Yokohama. In other words, getting on the right train will get you from Seibu Dome all the way to Yokohama via the Seibu Railway Sayama Line, Seibu Ikebukuro Line, Metro Fukutoshin Line, and Tokyu Toyoko Line without changing trains. Despite its remote location, Seibu Dome is surprisingly accessible.

Are you now more familiar with Japan’s six major domes? Make good use of this information to plan your trip to a baseball game or concert in the future!