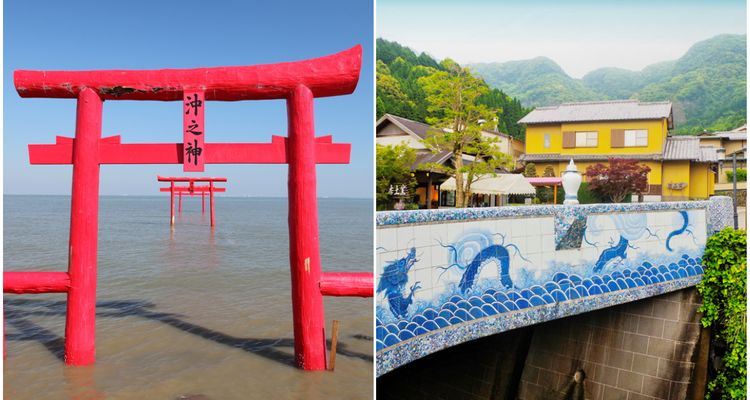 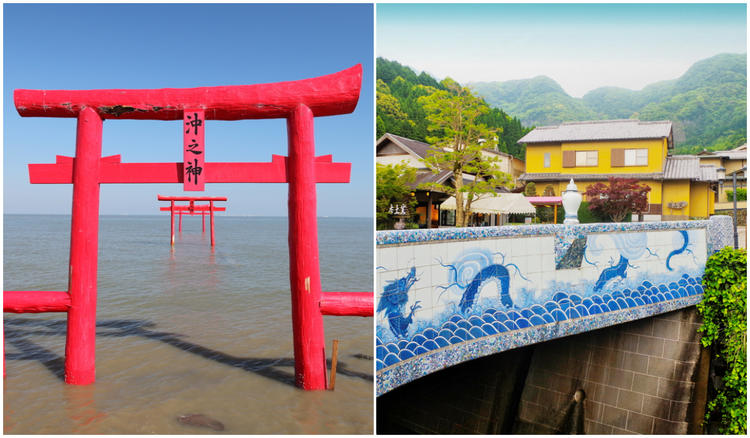 Located in northwest Kyushu, Saga Prefecture is a coastal area with a rich history and culture begging to be explored. In this article, we cover the most iconic spots and activities in Saga Prefecture, such as learning about an ancient Japanese civilization at Yoshinogari Historical Park or sitting in a hot spring bath infused with a rare kind of Japanese tea at Ureshino Onsen. If you haven't fully filled out your Kyushu or Japan travel itinerary yet, definitely consider adding these to your list!

Saga Prefecture straddles Fukuoka and Nagasaki Prefectures. Facing the Ariake Sea and in surprisingly close proximity to mainland Asia, it was once an important gateway for the transmission of foreign culture and trade in Japanese history. Today, it is well known for its pottery culture, particularly in the towns of Karatsu, Imari, and Arita. Saga Prefecture is also an incredibly spiritual place, with several incredibly well-known shrines built upon it and lush nature abound. Keep reading to discover some of the wonders you can encounter on a trip to this stunning prefecture.

Measuring a whopping 73.7 hectares, Yoshinogari Historical Park is home to one of the largest Yayoi Period (3 B.C. - 3 A.D.) ruins in Japan. A section of what used to be a sprawling village has been reconstructed, with ancient crafts and relics such as copper knives and decorative glass beads on display. It’s a great place to learn about an ancient Japanese civilization that is speculated to have held one of the earliest forms of government in Japan. You can even participate in workshops that’ll teach you interesting skills such as crafting ancient stone jewelry, or if you’re more interested in food, there’s a restaurant that serves up all kinds of delicious dishes made with local ingredients. With a picnic area, golf course, and even a souvenir shop nearby, there’s plenty of fun to be had at this national historical park!

2. Explore One of the Most Unique Castles in Japan at the Saga Castle History Museum

Out of the many castles in Japan, one of the most unique has to be Saga Castle. Most Japanese castles are built on hills or mountains as that provides a better vantage point against enemies, but Saga Castle was actually built on flat land with only a moat and castle walls to protect it. In 1726, most of the castle was destroyed in a terrible fire, but eventually parts of it were reconstructed in the early 2000s, and today it stands as one of the largest wooden castle reconstructions in Japan. Traditional building methods dating back to the Edo Period (1603-1867) were used in its reconstruction, and that coupled with its uniquely Japanese features such as a stunning 45-meter-long tatami corridor is what granted Saga Castle its place within the “100 Fine Castles of Japan” list made by the Japan Castle Foundation.

You can see the beauty of the reconstructed architecture yourself at the Saga Castle History Museum. The museum has English signboards and brochures as well as videos introducing Saga Prefecture and the castle with English subtitles, so even if you don’t understand Japanese, you can easily learn more about this marvel of architecture.

3. A Picturesque View Awaits You at Yutoku Inari Shrine

Also known as Nikko Toshogu Shrine in Kyushu, this is one of the three most famous shrines dedicated to Inari, the deity of food, clothing, and shelter. It is also home to two other main deities: Omiyanome-no-Okame, a goddess who helps people become masters in arts and crafts, and Sarutahiko-no-Okami, a god who blesses people with safety when traveling. For this reason, Yutoku Inari Shrine gets over three million visitors every year who pray for such things as success in business and life.

Even if you’re not into anything spiritual, Yutoku Inari Shrine is worth a visit for the view. It is full of flowers year round, including several kinds of sakura (cherry blossoms). It is built into a steep hillside, with torii (shrine gates) lining the way to a small shrine building called the “Okunoin” from which you can admire the overlooking view of Kashima City - where the shrine is located - and the nearby Ariake Sea. There’s even a museum where you can find all sorts of precious artifacts from the shrine, including swords, ceramics, and paintings. It’s definitely a must-visit spot if you’re in Saga Prefecture!

4. Admire Traditional Japanese Craftsmanship at the Pottery Villages of Arita, Imari, and Karatsu

One of the must-do activities for anyone visiting Saga Prefecture is to drop by the villages of Arita, Imari, and Karatsu. All three of them are incredibly well known for their pottery, with Arita in particular being especially renowned as the origin for Japanese porcelain. Hop through several pottery workshops and stores and choose a souvenir or ten, or walk around and see if you can spot any decorations on buildings that are actually Arita, Imari, or Karatsu ware!

5. Dip Your Toes Into Ureshino and Takeo Onsen

Saga Prefecture is also an amazing area for those looking to soak in an onsen (hot spring), with Ureshino and Takeo standing out amongst the crowd.

Ureshino Onsen is known for its rare variety of local tea, which you can find in not just its cuisine, but even a few of its hot spring baths! If you’re interested in trying a rare tea variety as well as seeing tea plantations, it’s a must-visit. Takeo Onsen, on the other hand, has over 1,300 years of history, with silky smooth waters that are said to alleviate skin conditions. In fact, many historical figures are said to have bathed here, including German physician Philipp Franz von Siebold. It is also home to a host of architectural wonders, including the two-story gate pictured above which was designed by the same architect who worked on Tokyo Station.

Hot air balloon competitions have been held in Kyushu since 1978, and in Saga Prefecture since 1981. So, it only makes sense that the first permanent hot air balloon museum was established in Saga Prefecture in October 2016. Within, there’s a large theater where you can see videos of the world-renowned Saga International Balloon Fiesta, which usually has around 100 hot air balloons and is one of the largest events of its kind in Asia with over 800,000 visitors each year vying to see the balloons take off into the sky! There’s also exhibits that show how Saga became known for hot air balloons and how these balloons work, as well as an exciting flight simulator where you can feel as though you’re in a hot air balloon yourself!

7. Fall in Love with the Mystical Ouo Shrine

This shrine is incredibly popular among photographers for its torii (shrine gate) that, during high tide, seems to float on the Ariake Sea. The difference between low and high tide here is incredible - Tara Town, where the shrine is located, is known as “the town to see the power of the moon” because it’s where you can see the largest tide difference in all of Japan, with up to a stunning 6 meters difference! The gorgeous view gets even more lovely in August with lanterns floating around the torii gate during the town’s annual lantern festival.

8. Watch the Sun Reflecting Over the Hamanoura Rice Terraces

Japan’s rice terraces are marvels of nature, and the Hamanoura Rice Terraces are particularly amazing. These rice fields facing the sea fill up with water from mid-April, and when the sun sets, the rays reflect on the water, creating a view like none other. It is so beautiful that it’s an Important Property of Saga Prefecture as well as one of the top 100 terraced rice fields in Japan. The best view of this 11.5 ha area is from the nearby observatory.

Encompassing a stunning 30 ha of land, Kankyo Geijutsu no Mori Park was established to help people connect to nature. It is home to more than 10,000 maple trees, and though a walk through it is a great way to enjoy fall foliage, photographers are particularly in love with how the foliage looks from inside the Fuyu Sanso, a reconstructed old house where you can partake in light refreshments such as tea while gazing at the autumn scenery. Though fall is the most recommended season to visit, it has seasonal delights worth appreciating all year round.

10. Take a Breather Together With Family at the Aesthetic Takeo City Library

This city library gained fame for its aesthetics after being renovated in 2013. People visit from all over Japan and even from overseas just to glance at the architecture up close. With a Tsutaya bookstore and even a Starbucks coffee shop where you can sit and enjoy the books you borrowed or bought, it is completely set up for an entire day’s worth of literary enjoyment. It also has a children’s section, making it perfect for a family visit.

11. Gasp at the Gorgeous Night Cityscape of Saga at the Saga Prefectural Office Observation Hall

Just a 10-minute walk from the Saga Castle Historical Museum lies this quiet observation deck. Since there are barely any tall buildings in Saga, even though this observation deck isn’t the tallest out there, you can still get a gorgeous unobstructed view of the city below. It’s especially recommended to go at night, as you’ll get to see the city lit up in twinkling lights. Even better, why not come at sunset and dine at the restaurant on the same floor? Enjoy good company, food, and the stunning view of the sun setting over the city.

This is one of the top three morning markets in all of Japan, and with good reason! It’s one of the few places where you can try freshly-caught Yobuko squid, a Saga delicacy that can’t be eaten fresh almost anywhere else as it’s too sensitive to changes in the environment. It also has a plethora of stores and stalls selling all manner of food and goods. One could say it’s almost a must-visit when you’re in Saga Prefecture.

13. Cool Down at Kiyomizu-no-Taki Falls

A lot of people come to this waterfall to feel the splash of the water as it falls a distance of 75 meters, instantly evaporating the heat of the summer. The water itself is incredibly fresh, so much so that it is ranked as one of the top 100 in Japan. There’s far more than just gazing at the waterfall: nearby is Kenryuji, a temple full of statues and other wonders to explore, as well as the city of Ogi, famous for its carp cuisine. If you’re looking for a serene yet exhilarating nature escape, Kiyomizu-no-Taki Falls is the place to visit.

As a prefecture that faces the sea, Saga Prefecture is famous for its seafood. However, it is also a great place for tea - such as Ureshino tea, mentioned above - as well as for beef, with its local Saga beef being a famous kind of wagyu beef worldwide. We once summarized the top five food experiences any Saga tourist should try. Don’t miss out on its delicious wonders!

Saga isn't the only prefecture in Kyushu soaked in history and natural beauty! Be sure to explore the rest of Kyushu to see all the charming places that are testaments to the natural and historic beauty of Japan!