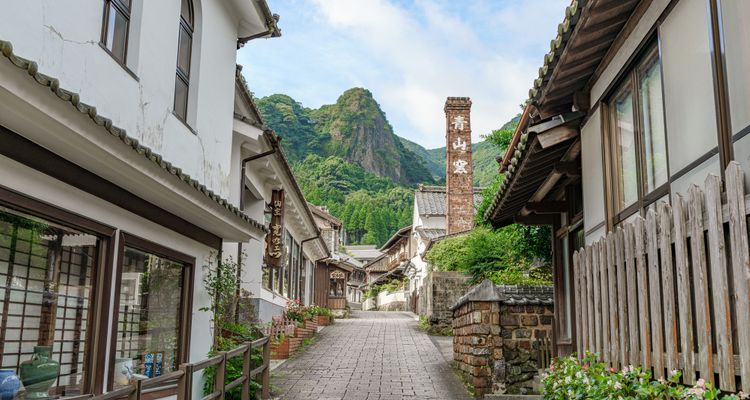 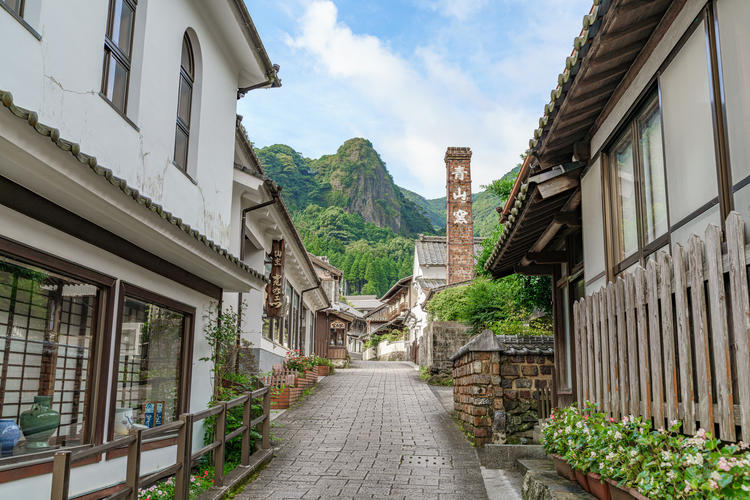 Nagasaki, on the far western edge of Japan's main islands, is known mostly for its main city. The city of Nagasaki was the only port city that remained open during Japan's centuries of isolation, allowing it to develop a distinctive food culture and architectural sights. But there's much more to see in the city's environs as well - beautiful seashores and islands, traditional townscapes, and hot springs galore! If you're spending a few days in Nagasaki, then you should consider some of these day trips to get a fuller image of Japan's history and nature.

1. Shimabara: Jump Back to the Samurai Era

Today in Shimabara, you can still find remnants of life in the Edo Period (1603-1867): the castle has been restored to its original majestic state, and nearby, a group of restored samurai houses are fully open to the public and allow you to get a glimpse into what daily life was like in the 17th century. Try on some samurai armor while you're at the castle!

The city of Shimabara is charming beyond just its samurai quarter. It is known as a "city of water" because of the many springs that dot the city, and you can find carp swimming about in little aqueducts that line the roads as well as in ponds like in the Shimeiso garden. Don't miss out on the local delicacies like "kanzarashi," which are dumplings served in a honey-based syrup, and "guzoni," a stew with large rice cakes.

The name Shimabara has also been etched in history due to the 1637 - 1638 Shimabara Rebellion, when a group of overtaxed peasants and persecuted Christians took up arms against the local lord and attacked, and Shimabara Castle was one of the battle locations.

Shimabara is an hour and a half from Nagasaki City by car and slightly more by train. The Shimabara Railway may run relatively infrequently, but it runs right along the coastline and offers a beautiful sight of the sea. One popular activity is to get off at Omisaki Station (said to be the station that's closest to the sea in all of Japan), write a wish on a yellow handkerchief (as yellow is the railroad's trademark color), and tie it to the station railing!

For a first-person tour description of Shimabara's attractions, check out this article!

2. Unzen Onsen: A Hot Spring in the Mountains

Right next door to Shimabara is Unzen, a hot spring resort and national park. Unzen-Amakusa National Park was the first-ever national park in Japan, designated in 1934, and it later became Japan's first Global Geopark.

The hot springs at Unzen go by the name Unzen Jigoku (the "Hells of Unzen") because of the hot spring area's boiling water and volcanic gases billowing straight out of the ground. But despite the unpleasant name, it has been quite popular internationally as a summer resort, and indeed it is the sulfuric content in the water that is said to be beneficial to your skin! There are a few experiences you should enjoy while you are there, like snacking on some onsen-steamed eggs, warming your feet on the geothermal heat at the "foot steam," and trying the lemonade that has been an Unzen staple since its early days as a resort as it is made using local spring water and lemons from the Shimabara Peninsula.

Before or after indulging in a relaxing soak, you should see the beautiful natural vistas that the Unzen area offers. The most popular spot is the Nita Pass, which is almost 1,100 meters above sea level and situated between two mountain peaks, and from which you can gaze down upon the mountain slopes. The fall foliage colours are particularly beautiful, while springtime sees pink azaleas in full bloom. If you’re visiting in fall, make sure also to visit the Misojien Garden, whose evening illuminations and bright-red foliage are particularly wonderful!

3. Arita: A Ceramic Town That Once Defined Japan

During the Edo Period, even as the central government banned international trade, trade with the Dutch and Chinese were still permitted from some locations, which is how porcelain from Saga Prefecture was exported overseas and became a sensation in Europe under the name "Imari ware." It got that name because it was exported to Nagasaki from the port city of Imari; much of the actual production happened in neighboring Arita. Arita-Imari ware began as blue designs on white backgrounds, and is still associated with that color scheme. However, the designs later became more colorful and more intricate, fueling Imari ware's popularity overseas.

Arita is in Saga Prefecture but is easily reachable from Nagasaki (1 hr 10 min by car, 2 hrs by train). It's a traditional small town that definitely defines itself by its ceramic heritage. You should definitely visit the Tozan Shrine, where the torii gate, lanterns, and guardian lions are all made of ceramics, and have a meal using Arita ware tableware at Gallery Arita, a beautiful cafe not far from Arita Station.

The most accessible way of taking in the ceramics experience is by visiting Arita Porcelain Park, a "porcelain amusement park" that takes the form of a German town and palace. In addition to food, shopping, and plenty of ceramics pieces to admire, there is also an active kiln where you can experience spinning a lathe, moulding pieces by hand, or drawing designs.

For a more off-the-beaten-path approach, you can visit Okawachiyama village. Dozens of centuries-old ceramics-making kilns are located in this village in the mountains. Walk amongst its winding paths, admire the various porcelain decorations throughout the town, and peek through the various store windows. Here as well, you can experience lathes and designing first-hand, as well as tour an active factory.

You can read a first-person review of Imari and Arita in this article (Day 2).

4. Sasebo and a Coastline Speckled With Islands

Drive along the Pacific coast to the northwest of Nagasaki City and you will come across the Kujuku Islands (literally meaning “99 islands”, though there are close to 200 of them). This cluster of verdant islands look fantastic against the backdrop of the blue ocean and sky, as if land and sea are colliding and interweaving with each other.

The Tenkaiho Observatory is a must-visit, as it allows you to soak in the whole scenery in one glance, accompanied by colourful flowers in certain months. To get closer to the islands, stop by the Pearl Sea Resort: even if the family-friendly aquarium and shopping center don’t interest you, the resort also includes the docks where you can board a pleasure cruise or ferry, or rent a canoe or kayak to explore the waters on your own.

Within a close distance is the downtown of Sasebo, Nagasaki’s second-largest city. Due to its American naval presence, the city has adopted American burger culture as its own! The "Sasebo Burger" always includes bacon and egg in addition to the patty, and some of the eateries have adopted American diner aesthetics as well. Make sure to see the stunning Miura Catholic Church by Sasebo Station before you leave.

5. Huis ten Bosch: An Extravagant Homage to the Dutch Life

Because of their centuries-long special trading relationship, Nagasaki has a close affinity with the Netherlands. In 1992, in celebration of this relationship, an amusement park called Huis ten Bosch ("House in the Woods," named after a Dutch royal palace) opened an hour and a half from Nagasaki, an elaborate recreation of a neighborhood and harbor in a Dutch architectural style.

Of course, for European tourists this wouldn't be a very interesting destination, although they might still be amused by the concept and astonished by its scale and extravagance. While Huis ten Bosch's exterior is an unassuming brick and stone, inside is every type of attraction under the sun, including a waterpark, robots, virtual-reality exhibits, bouncy castles, roller coasters, canal boats, giant movie projections, a "teddy bear kingdom," and live entertainment. More bookish visitors would appreciate the art galleries and porcelain gallery. August evenings are closed out by fireworks displays, while during the winter season it hosts Japan's largest illumination display, with 13 million lights!

The Goto Islands are a cluster of small, sunny islands to the west of Nagasaki. They provide the perfect way to spend a day fully secluded from modern life: go swimming at the Takahama Beach, try your hand at stand-up paddleboarding or water scooters at the Ohama Beach, or hike up Mt. Onidake and admire the night sky from the observatory at the summit.

But these islands also contain a valuable history: they are home to four of the churches that are on the UNESCO World Heritage Registry as "Hidden Christian Sites of the Nagasaki Region." During the Edo Period, even as Christianity was officially forbidden by the central government under punishment of death, groups of "hidden Christians" remained in these outlying islands and quietly kept the faith alive for two centuries. When the prohibition was lifted as Japan modernized, these Christian communities built several opulent churches that serve as a testament to their faith and perserverance. If you're visiting the main island of Fukue, you should visit the Dozaki Church, which is now a museum, or the startlingly white Mizunoura Catholic Church.

Other sights to add to your itinerary include Osezaki Lighthouse and the nearby Praying Goddess Statue. In terms of food, you can't miss out on Goto Udon, made from the best of the island's seafood and vegetables. Glamping is an option for those who are looking for a longer stay.

You can get to the main island of Fukue from Nagasaki by ferry (3 hrs 10 mins), jetfoil (1 hr 30 mins) or plane (30 mins). Once you're there, rent-a-car is the most flexible way of getting around.

Explore Nagasaki and its Charming Surroundings

As you can see, Nagasaki Prefecture offers a truly unique mix of sights and cultures - American food and Dutch architecture; cathedrals that stand over traditional Japanese townscapes. Make sure to catch as much of it as you can while you're there!

Nagasaki isn't the only prefecture in Kyushu soaked in history and natural beauty! Be sure to explore the rest of Kyushu to see all the charming places that are testaments to the natural and historic beauty of Japan!