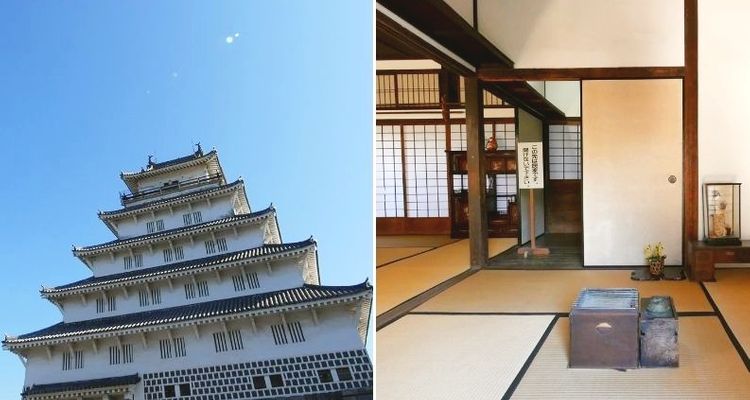 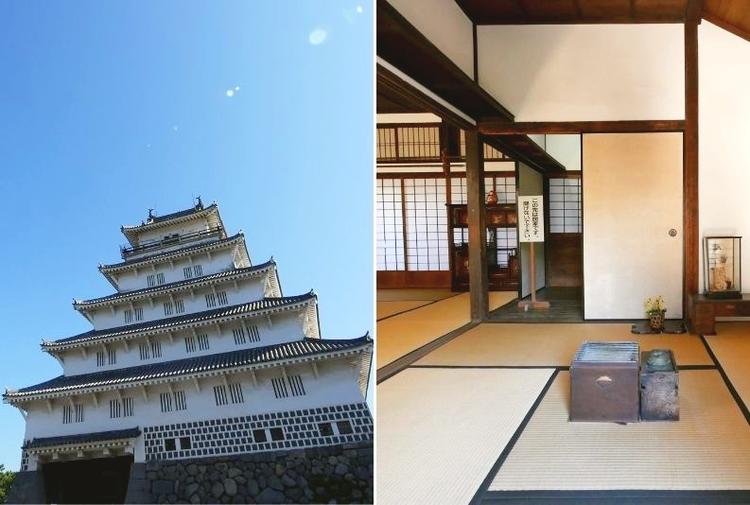 Shimabara Castle Town: We Visited the Location of a Christian Rebellion!

Shimabara, now a quiet city in southeastern Nagasaki Prefecture, was once a thriving castle town with Japanese samurai lining the streets. We got a chance to visit this quaint city, which is steeped in feudal Japanese history and was a significant location for Christianity in Japan. Read more to learn about its fascinating history involving samurai, Christianity, and what to do in the area!

Shimabara City is located in southeastern Nagasaki Prefecture, on the opposite end from bustling Nagasaki City. Nestled alongside the coast of the Ariake Sea, its neighbor across the water is Kumamoto Prefecture. Although only about a 1.5-hour drive or 2-hour train ride away from Nagasaki City, the atmosphere is strikingly different, with the charm of a retro-style town. We headed there on a sunny Thursday morning, meaning that there was little traffic and few tourists roaming the castle and streets. The castle tower peaked out over the rooftops from several streets away, and continued to appear more and more impressive the closer we got, the sun shining off its clean, white walls.

Shimabara Castle is one of the focal points of Shimabara City, and it was designated as one of the 100 finest castles in Japan by the Japan Castle Foundation. In 1616, Shigemasa Matsukura took over as feudal lord of the Hinoe Domain (later known as the Shimabara Domain) and in 1618 took to rebuilding the small, old castle he inherited. The new Shimabara Castle took seven years to complete, but the years of work paid off, as the demanding structure subsequently served as the home of nineteen feudal lords from four different clans for the following 250 years. It even survived the Shimabara Rebellion, a turbulent uprising in the area that occurred from 1637 to 1638.

The original grounds were surrounded by a 3,800m long wall and 3,935m long moat and hosted three main buildings: the Honmaru, Ninomaru, and Sannomaru. The castle was torn down in 1874 and stayed in ruin until 1964 when the castle tower was rebuilt, restoring a historical air to the city. The city itself does not have any high-rise buildings around the castle, meaning that the castle towers over the surrounding area and wonderfully complements the neighborhoods still lined with traditional Japanese walls, reminiscent of the boundaries that would have been put in place during the age of the samurai.

What Was the Shimabara Rebellion?

The Shimabara Rebellion began when abuse, famine, and high taxes caused people of the Shimabara and neighboring Amakusa domains to suffer greatly, causing heavy unrest and turmoil. However, another major factor was the persecution of Christians, of which there were many in Nagasaki at the time. Although the area was originally ruled by a Christian feudal lord, under the rule of Shigemasa Matsukura, Christians were tortured at the nearby Unzen Volcano and forced to renounce their faith; those who did not were then thrown into the boiling springs of the volcano, and many perished for their beliefs.

The people of the Shimabara and Amakusa domain finally had enough after a wife of a local headman was brutally murdered as punishment for her husband’s inability to meet the tax quota. In 1637, the rebel army, numbering in the thousands and consisting of many Christian believers, began attacking Shimabara Castle and Tomioka Castle in Kumamoto. Unable to seize control of the castles, the rebel armies convened at the Hara Castle ruins in the Shimabara Peninsula and continued to fight for over three months. The rebellion finally ended in early 1638, after a massive army consisting of troops that served feudal lords all over Kyushu descended on the Hara Castle ruins and suppressed the revolt, killing most of the rebels in the process.

What to See and Do at Shimabara Castle

Shimabara Castle is a five-story structure with exhibits about the area’s history on each floor. The first floor is the Christianity History Museum, which exhibits pieces of art and artifacts that are related to Christianity in the region. It is fascinating to see the blend of traditional Japanese and Western Christian elements in pieces such as a Christian tombstone and sword, and the exhibition gives a detailed insight into the lives of Christians in the area at the time. Descriptions of the artifacts are available in English as well, so it was very easy for us to navigate through and understand the significance of the items we were looking at. As there is so much to see and read inside, it is enough to keep busy for a decent amount of time depending on how in-depth you are looking to go.

The theme of the second floor is the history of the region, and the third floor focuses on the history of the local people. Each floor is lined with exhibits with numerous fascinating, historical artifacts and pieces of art that show life in the area back then, such as stunning lacquerware and even weapons! On the fourth floor lies a quaint rest area, which then leads to the fifth floor with the observation deck and sweeping views of the surrounding area. On a clear day, you can even see the neighboring Kumamoto Prefecture across the water!

Although home to many sacred and historical artifacts, the castle does also offer some fun attractions such as trying on samurai armor. Why not saddle up in some warrior wear and feel like a lord in your own castle? There is also a statue garden located right outside the exit, with majestic statues contorted into different expressive poses. If you get peckish, there is a gift shop that is located right across the entrance of the castle, where you can find local souvenirs, treats, and trinkets.

About a 7-minute walk from the castle are the Shimabara Samurai Houses, quietly tucked away along a sleepy residential road. You will know you are on the right path when you see the gravel road with a tiny stream running through it! The water running through the stream was actually used back in the day for daily needs, so it was a vital part of the life of the samurai in this area. We were lucky to be there on a sunny day with a blue sky, which created a stunning backdrop to all the traditional Japanese gates and architecture.

When Shimabara Castle was built, samurai lodgings were also built to the west of the castle’s outer wall. Due to these warriors mainly using guns during battles, this area was nicknamed “Teppomachi,” or “Gun Town.” The daily occupations of the samurai in this town were copyists at local government offices, government officials, prosecutors, police, as well as guards of the castle gates.

There are three main samurai houses that you can view the interior of: the Torita Residence, the Shinozuka Residence, and the Yamamoto Residence. The interiors appear almost frozen in time from the age when the samurai used to reside in them: the floors are lined with tatami, the walls are adorned with traditional Japanese artwork, and the kitchens are decorated with traditional cookware that would have been used in the olden days. Sliding doors separate the different rooms and the quiet neighborhood leaves the air still. Stepping through the entranceway and looking around almost feels like you are peering back through time.

The exterior of the houses are also kept in the traditional style, with thatched roofs that have been rethatched with Japanese bamboo. By feudal decree, fruit trees were ordered to be grown on the grounds, and many residences owned plum, persimmon, mikan (mandarin orange), and loquat trees, which would produce fruit throughout the year and were therefore able to sustain the residents. The air surrounding the houses remains regal and timeless, and be sure to not be too loud, as to not disturb the neighbors!

What to Eat in Shimabara: Tastes of History and Nostalgia

Shimabara is the home to several unique, original Japanese dishes, which are also a must-try when exploring the city! There are several restaurants and cafes that are only a short walk from the castle area, and not only will you be able to enjoy some delicious morsels, but also relax in a retro atmosphere.

First up is “kanzarashi,” one of Shimabara City’s most famous specialties. A sweet treat with a simple appearance, Kanzarashi consists of small, round rice dumplings called “dango” which are boiled in spring water until chewy, and are then served in a unique, refreshing syrup made from honey and sugar. The refreshing sweetness makes for a delicious afternoon dessert!

Another beloved Shimabara dish is “guzoni,” a hearty stew that features chewy “mochi” (rice cake). This dish is believed to date back to the Shimabara Rebellion, when the leader of the uprising had local farmers provide the rebels with rice cakes, which were then mixed with other local ingredients such as seafood to create this substantial dish that was able to sustain the fighters throughout the rebellion. Warm and delicious, guzoni will fill your belly and give you enough energy to continue exploring the area!

Although not connected to the age of the Shimabara Rebellion, “rokube” is a noodle dish that is unique to the Shimabara area. After a massive earthquake in 1792, food was scarce and people turned to sweet potatoes for sustenance. A local farmer named Rokube came up with the ingenious idea of mixing grated yam with dried sweet potatoes, adding hot water, and then kneading until the dough was able to be formed into thick noodles. Eaten with a soy-sauce based broth, the dish is simple but is beloved by many in the area for its nostalgic taste.

Shimabara is a relatively unexplored castle town, which meant that we were able to get a look into samurai history without having to battle any crowds! Nagasaki is well-known as a hotspot of Christianity in Japan, and it was fascinating seeing the religious elements that shaped the culture of the area. Why not step a bit off the beaten path and experience an unknown side of Japanese feudal history?

Also, if this town peaks your interest, you'll be pleased to know that there's plenty more interesting cities scattered across the Kyushu region, which Nagasaki Prefecture is a part of. Learn more about the region and the exciting tourist spots it holds through the Visit Kyushu official website!