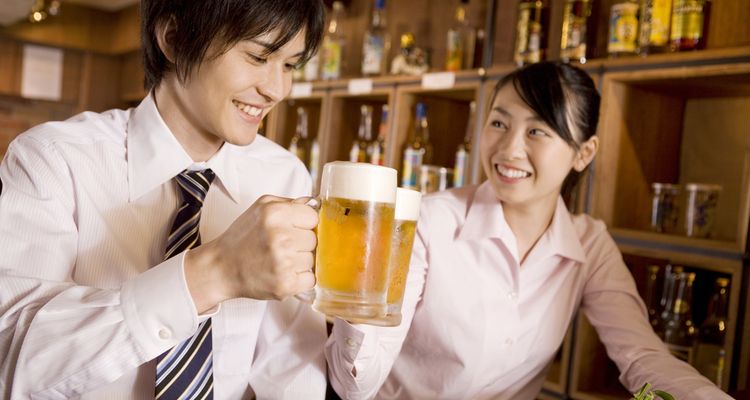 Everyone probably has experiences of visiting another country and being surprised by the culture and customs there, or being completely perplexed by the rules and social norms that seem perfectly obvious to the people of that country. One thing that often surprises visitors to Japan is seeing drunk people sleeping on station platforms. In Japan, drinking alcohol in public is permitted. There are no major restrictions on where you drink alcohol or when you can purchase alcohol. We asked some people to find out just what kind of impressions foreigners have towards Japan’s relatively uninhibited drinking culture.

1. You Can Drink Alcohol in Public Places in Japan

One of the most frequent comments that pop up about differences between Japan and other countries is that it’s permitted to drink alcohol in the streets.

“Japan’s like a paradise for drinkers. I went to a Japanese festival and there were all these stalls. You could buy lots of small things to eat there and walk around drinking alcohol while you eat. It was a very Japanese experience.” (America/male)

“I was surprised to see salarymen drinking at the train station. In the States we're not allowed to consume alcohol in the streets so...” (America/female)

This is one way that Japan differs from many other countries around the world. It’s not against Japanese law to drink alcohol in public. You can buy alcohol at a convenience store or supermarket and drink it on your way back to where you're staying. In spring, while the cherry trees are in full bloom, you can look at the cherry blossoms while having an outdoor party known as “hanami”. You may also have seen the twitter hashtag #shibuyameltdown. Seeing people passed out drunk here and there, on the train or in the streets, may seem particular to Japan because drinking in public is allowed.

2. You Can Even Drink on Public Transport

In Japan, consumption of alcohol on public transport such as trains and buses is not prohibited by law. However, there is a hard-and-fast rule of etiquette to ensure you don’t bother the people around you. So, we can’t say it's completely advisable to drink on the train or bus.

“There were people drinking alcohol on a long-distance bus. I thought, “Is that allowed?” Beyond that, I was wondering if they weren’t feeling sick from the swaying of the bus.” (Taiwan/female)

“I was shocked that there were people drinking beer on the bullet train. Being allowed to drink alcohol on public transport is unthinkable back home.” (Australia/male)

Even outside of public transport, you could say it’s an oversight of Japanese law that as long as you’re not the driver you can drink while riding in a car if you’re in the passenger seat or back seat. Of course, it’s not recommended, out of concern that it may negatively affect the driver, but it’s worth observing that Japan is one of few countries in the world that has such a high degree of freedom relating to alcohol consumption.

3. You Can Even Buy Alcohol 24/7 From Vending Machines

In addition to the variety of alcohol in Japan and how cheap it is, the ability to purchase it anywhere at any time is another unique aspect of Japan’s drinking culture that foreigners in Japan frequently refer to.

“You can get drinks that contain 9% alcohol for just 2 dollars at convenience stores in Japan. The most surprising part is that they didn’t ask to see my ID at the register. Does the clerk just arbitrarily decide who to sell alcohol to?” (America/male)

"When I was enjoying a trip to the hot springs in Japan, there was a vending machine selling alcohol at the Japanese inn. It looked like you need to show ID, but it must be nice to be able to buy alcohol so easily.” (America/female)

“I found it surprising that you are asked to press the age verification button at the register when buying alcohol at a convenience store. In Taiwan, that judgment is up to the clerk.” (Taiwan/female)

Japanese convenience stores sell all kinds of alcoholic beverages such as beer, various flavored drinks known as “sawa (sour)”, wine, and whisky. Purchasing is extremely easy; when you go to pay all you have to do is tap the “age verification button” displayed on the register. Showing ID is not mandatory, but if the clerk suspects a customer is underage, they may request to see ID on a case-by-case basis.

4. Work Drinks are a Regular Thing

Up to this point, the comments about Japanese drinking culture have mainly been positive, but there are also many people that have doubts about the customs Japanese people have that involve alcohol, more than the alcohol itself. In particular, people take issue with the close relationship between alcohol and work.

“I work in a Japanese company and, generally speaking, there are a lot of drinking parties. In Taiwan, we have dinner parties rather than drinking parties, and there aren’t as many. Also, the number of Japanese people that stay out drinking until the last train during the week is bit concerning. In Taiwan, if the next day is a weekend or holiday, late would be considered 11:00 pm. If it’s a weekday, we would finish up at around 9:00 pm. After parties aren’t part of our drinking culture either, so once the party is over, we go straight home.” (Taiwan/female)

“It seems like Japanese people put on drinking parties every week. I hear people say they can’t drink much, but I wonder if that’s really true.” (America/female)

“It seems like Japanese people have drinking parties for communication purposes. In China we have them for business and negotiations, not workplace communication, so it’s a completely different purpose.” (China/female)

One reason for this is probably that shyness is considered a national trait of Japanese people. For Japanese people who are constantly questioning other people’s expressions while taking part in conversations, it’s difficult to get to the heart of things in conversation. That’s why, in order to talk a little deeper, relationship-building and everyday communication issues are resolved over drinks. Throughout the year at a typical company many gatherings are held where alcohol is just as crucial as the meal. To give a sense of the frequency, in addition to the monthly drinking party, there are also farewell parties and welcome parties, as well as an end-of-year party and New Year's Party every year. In some workplaces, drinking parties are not just for the end of the month, but the end of every week.

5. There are Plenty of Places to Enjoy a Drink Alone

You will often see people enjoying a drink and a meal alone at an izakaya (Japanese-style pub). There are more than a few foreigners who are surprised by this scene.

“I was shocked to see salary men drinking alone. I'm used to drinking with a group, but leisurely enjoying a drink alone looks cool.” (America/female)

“I like that there are a lot of places where you can quietly enjoy a drink and a meal alone, just like in the Japanese drama, “Midnight Diner”. This drama is really popular in Korea, and establishments modeled after the midnight diner are trendy at the moment.” (Korea/male)

There are many izakaya where you can happily go alone scattered over Japan. You could say that Japan has a better culture for enjoying a drink alone compared to various foreign countries. This is thought to be because having a meal alone at a restaurant is an everyday thing for Japanese people. It follows that there are a lot of people who would have a drink while eating their evening meal alone.