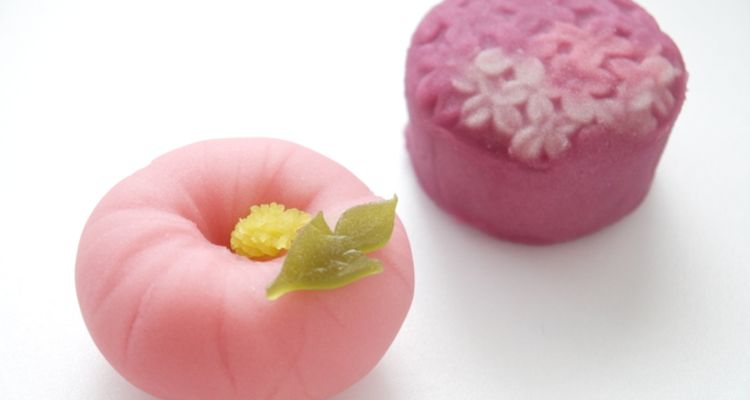 Wagashi, the famous Japanese traditional sweet cakes, come in many different types – suitable for different seasons and occasions. Since there are so many different kinds, why not get to know them so you will know what to order the next time you visit a Japanese tea shop?

Nama-gashi comes in a wide selection of sweet cakes. They are usually made from sticky rice flour (mocha-gome), kanten (agar-agar), an (sugar and bean paste), and wheat flour.

Made from sticky rice flour, sugar and white bean, Nerikiri is usually molded into shapes such as flowers, fruits or birds to represent the seasons.

Famous during the summer, Mizu-yokan is made from azuki beans, sugar, and kanten.

Mushi-yokan is made by steaming the mixture of an and wheat flour. This confectionary usually comes with chestnuts.

Similar with Mizu-yokan, neri-yokan is made from azuki beans, sugar and kanten but with less water.

One of the most famous wagashi, Manju is made from wheat flour filled with an. It comes in dumpling-like shape.

Round or square shaped wafer filled with an, Monaka is usually big and quite filling.

Ohagi, or botamochi, are sweet rice balls which are usually made with glutinous rice. They are commonly eaten during the higan periods in spring and autumn.

Filled with azuki bean paste, kizi-zakura is made from transparent jelly of kuzu (arrowroot). It is usually served chilled during the summer.

Another mochi filled with azuki beans, kusa-mochi is a dumpling shaped made from rice flour with yomogi leaves.

Wrapped in bamboo leaves, chimaki is a sweet rice dumpling.

Daifuku is a large amount of an wrapped in a very thin layer of mochi.

Kushi-dango is small rice-flour balls held on a stick. They are usually coated with sticky sauce made from soy sauce and sugar.

Hi-gashi is basically the dried form of wagashi.

Rakugan is made from glutinous rice and sugar. The dough is shaped using a wooden mold.

Made from rice and wheat, okoshi is a toasted cake where it is coated with syrup before it is dried.

Namban-gashi are cakes brought to Japan by the Spanish and Portuguese during the 16th century.

A sponge cake made of wheat flour, sugar, and eggs.

A type of cookie, boro is made from wheat flour, sugar, and eggs.

These are a little sugar balls made from syrup and corn starch.

Tai-yaki is a kind of pancake filled with red bean paste.

Different kind of beans such as azuki or kidney beans are boiled then sprinkled with sugar.

Karinto is fried strips of dough made from wheat flour, sugar, and eggs. This crunchy finger food is then sprinkled with sugar.