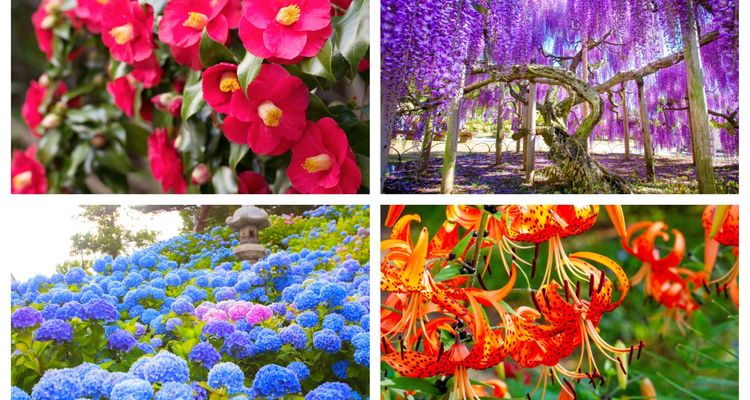 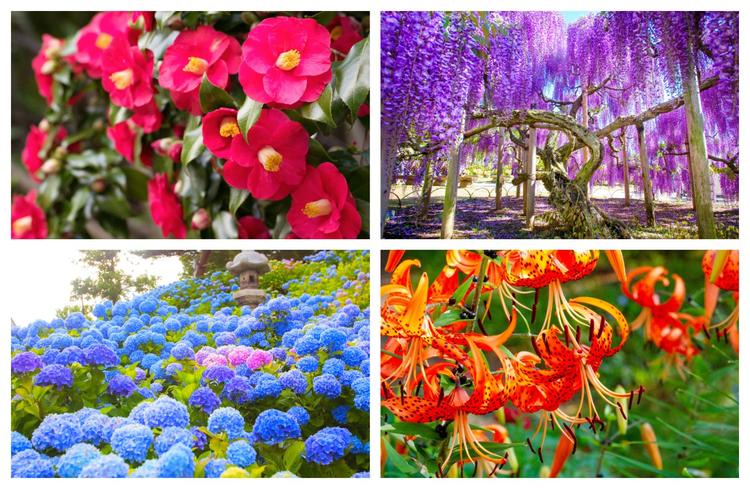 20 Flowers That Are Endemic Species in Japan

Japan is a country of four seasons and rich in nature. Here are 20 endemic species of flowers seen in Japan. The Camellia's scientific name is Camellia japonica. It blooms during the winter to spring, with yellow stamen and deep pink petals. When it wilts, the whole flower drops. This was considered bad luck for samurais back in the time, since it resembled the scene of chopping the head off, which was considered a dishonor to samurais. The Sasanqua's scientific name is Camellia sasanqua. It resembles the Camellia japonica a lot. You can spot them apart by how the flowers wilt. Sasanqua's wilt by one petal at a time. It blooms from the end of autumn to the winter. The Wisteria's scientific name is Wisteria floribunda. Also called Noda Fuji. The Wisteria grows in thick vines clock wise, and the flowers drape down from these vines. The lilac colored flowers hang down from 20 cm to 80 cm. During the night, the leaves curl into themselves. The Fringed Iris's scientific name is Iris gracilipes. In Japanese, when a plant is names Hime (ヒメ), it means small. In this case, the Fringed Iris is named so because it looks like a smaller version of Shaga (シャガ), the Japanese Iris in English, which is shown in the image below. The Fringed Iris is no larger than 30 cm, and blooms during May to June. The Tiger Lily's scientific name is Lilium lancifolium. They are the endemic species in Japan, Korea, China, and Vietnam. The Tiger Lily can be seen in the plains and small mountains around Hokkaido to Kyushu. The bright orange flower grows up to 1 to 2 m. It blooms during July to August. The Amur Adonis's scientific name is Adonis ramosa. They are perennial plants, which mean they have life spans over 2 years. They bloom during the early spring with small yellow flowers. It is also named to be the flower to announce the arrival of spring, and became one of the post stamps. The roots of Amur Adonis are poisonous. The Paris tetraphylla's scientific name is Paris teteraphylla. The stem's length is about 15 to 40 cm. The tiny light green flower blooms on the top of the stem during May to August. It only grows one flower per plant. The Star Magnolia's scientific name is Magnolia Stellata. It grows in parts of Aichi, Gifu and Mie. Naturally grown Star Magnolia's are named as near threatened endangered species. The pale pink flower blooms around March to April. The Lacecap Hydrangea's scientific name is Hydrangea macrophylla f.normalis. The small dots clustered are the flowers, whilst the petals surrounding the flowers are for decoration. The Japanese name for this flower, Gaku, which means frame, comes from this, that the petals look like they are framing the flowers. The Lamium album var. barbatum's scientific name is Lamium album var. barbatum. They can be seen in Hokkaido, Honshu, Shikoku, Kyushu, Korea and China. They grow among the semi-shade places, such as the side of the road. The plant grows up to 30 to 50 cm. The pink flower blooms around April to July. The Japanese name, Odoriko which means dancing girl, comes from the resemblance of a dancing girl. The Japanese Snake Gourd's scientific name is Trichosanthes cucumeroides. They come from China and Japan, and can be seen at Honshu, Shioku and Kyushu. They grow tangled to the trees or other plants. The white flower blooms around April to June, and only during the night. The Tulipa edulis's scientific name is Amana edulis. The plant itself is about 15 cm. The white flower that resembles the tulip blooms in spring. The flower is edible and is said to have effect to give vigor. Tulipa edulis grows among the plains. The flower closes in at cloudy days. The Japanaese Andromeda's scientific name is Pieris japonica. The Japanese Kanji name for this plant, 馬酔木, comes from the saying that when the horse eats the leaves of this plant, it will get poisoned and get drowsy like they're drunk. The plant grows up to 1.5 m to 4 m. At early spring, it blooms white flowers shaped like a pot. The Iris's scientific name is Iris sanguinea. The plant grows up to 40 to 60 cm. By May, the purple flowers blooms 1 to 3 per plant. It can be seen from Hokkaido to Kyushu. It is also poisonous. The Buffalobur's scientific name is Solanum nigrum. The plant grows up to 20 to 60 cm. The white flower blooms 4 to 8 per plant. They are also called Bakanasu (バカナス), which means stupid eggplant, from its uselessness, despite their resemblance to the eggplant. The Cardiocrinum cordatum's scientific name is Cardiocrinum cordatum. Their flower resembles the Lily, but the leaves are different. The leaves which are about 15 to 25 cm are shaped like a heart. The stem can grow up to 50 to 100 cm. The pale green flower blooms to side, and is about 11 to 13 cm long. The Japanese Buttercup's scientific name is Ranunculus japonicus. They can be seen widely throughout Japan, Korea, China, and Taiwan. They grow on sunny fields and mountains. The plant grows up to 30 to 60 cm. The small yellow flower blooms in spring. The Japanese name, which means the footprint of the horse, comes from the figure of the leaves near the ground. The Japanese Snowbell's scientific name is Styrax japonica. They are small trees that can be seen in copse's throughout Japan. The tree can be up to 10 m. The white flower blooms around May, in bunches and downwards. The fruit is edible but tastes nasty.

10 beautiful Japanese flowers and their meanings