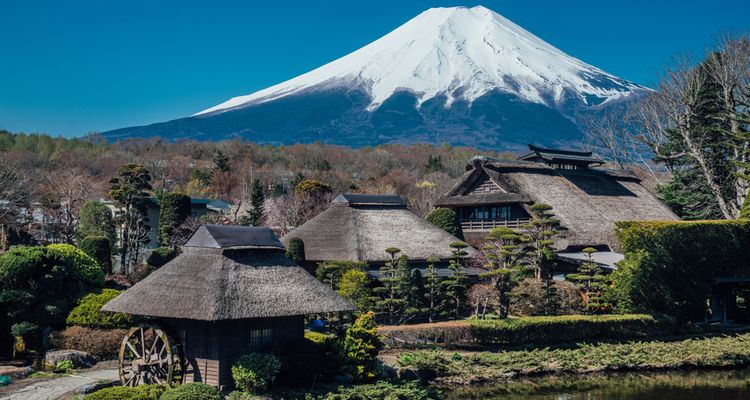 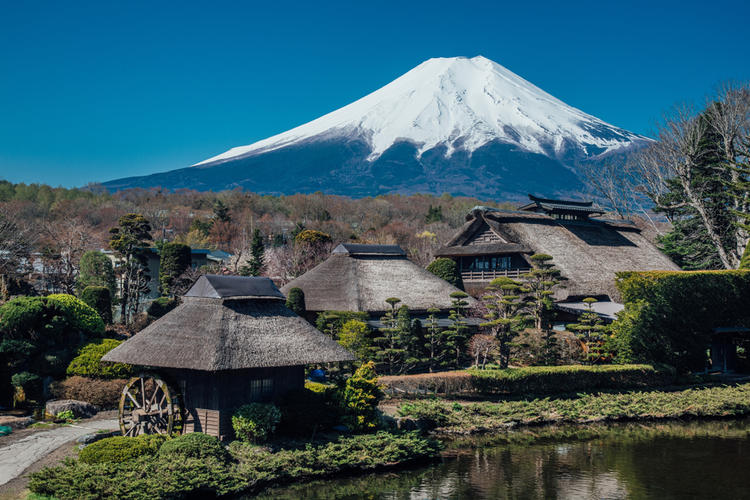 11 Secrets About Mt. Fuji That Even Locals Don't Know

Mt. Fuji, located at the border between Yamanashi Prefecture and Shizuoka Prefecture, is Japan's tallest mountain at 3,776 meters. What many people don't know is that there are many interesting secrets about Mt. Fuji. Read on to find out about eleven interesting facts that might make you even more of an expert on Mt. Fuji than Japanese locals!

Stages 1-7 of Mt. Fuji is government-owned property, but stage 8 onwards is actually the private property of the shrine Fujisanhongu Sengen Taisha. It is also only until stage 7 that a proper prefectural border between Yamanashi and Shizuoka is instated, and beyond that there is no specified border between the prefectures.

2. Is it True That You Can Get Married on Mt. Fuji?

Apparently, anyone can have a wedding at Fujisanhongu Sengen Taisha, the shrine on Mt. Fuji's peak. That being said, because the worship hall is quite small, the celebration must be restricted to around ten people and all the attendees have to climb the mountain to get there.

If you decide that you still want to celebrate your wedding there, you will have to go through the requesting procedure at the shrine at least three months in advance. The standard ceremony fee is 100,000 yen plus an additional contribution of gratitude (50,000 yen).

There are about three couples every year that celebrate their wedding at this shrine during Mt. Fuji's official climbing season. It would definitely take some effort, but getting married at the beautiful shrine on top of the sense of accomplishment from climbing Mt. Fuji will make sure you have a wedding you will never forget!

Fancy visiting the mountain yourself? Here's our all-in-one guide!

3. Where are the Beautiful Photos Online of Mt. Fuji Taken From?

Between around November and March every year, flocks of whooper swans migrate to Lake Yamanaka. These swans have wings that can span over two meters, and the sight of Mt. Fuji hovering beyond the swans is an incredible sight to behold.

These swans usually live in places like Siberia, the Sea of Okhotsk, and Iceland, but they migrate over to Japan to escape their harsh winters. The area in front of the lakeside hotel Coyou Club Yamanakakohan Salon is known as a popular spot for seeing the swans and is frequented by many visitors and locals.

Oshino Hakkai refers to the eight springs that are formed from the water filtered down to the foot of Mt. Fuji. It is a designated national treasure, as well as part of the 100 national clear water sources selected by Japan's Ministry of the Environment. Visitors find themselves mesmerized by the traditional scenery of the unpaved banks and houses with thatched roofs, complete with the elegant Mt. Fuji towering in the distance.

Lake Kawaguchi is located at the lowest altitude point among the Fuji Five Lakes, and during the spring season, around 800,000 moss phlox plants bloom around the lake. Fuji Motosuko Resort, a nearby park, celebrates a "Fuji Shiba-sakura Festival" every year. An additional bus called Shiba-sakura Liner runs from Kawaguchiko Station to this lake during the festival, so it is very easy to access.

Nihondaira is a hilly area at an altitude of 307 meters. It is designated as place of scenic beauty (a type of important cultural asset determined by the government for places with high scenic or artistic value), and in the past, it has even placed 1st on the list of 100 Best Sightseeing Spots in Japan. Nihondaira can be accessed by ropeway, and it offers amazing views of Mt. Fuji and the Port of Shimizu.

The Nihondaira Yume Terrace opened recently in autumn of 2018, and you can experience the views Nihondaira has to offer from its observation deck, which comprises a roofed terrace and glass-walled interior. There is also an exhibition area where you can learn about the culture and history of Nihondaira, as well as a cafe. If you have the opportunity to visit Nihondaira, we highly recommend stopping by!

Lake Tanuki is located in a corner of the Asagiri Plateau. It is known for its cherry blossom trees and rhododendrons in the spring and autumn foliage in the autumn, but it offers a beautiful view of Mt. Fuji all year round. We recommend visiting here for a nice stroll as you search for the most photogenic spots!

The view of Mt. Fuji reflected on the water is referred to as Upside-Down Fuji because of its inverted image, and it is considered so beautiful that it is featured on the 1,000 yen bill. You can see the Upside-Down Fuji from various angles at the Fuji Five Lakes, but it is not often that you get to experience the perfect view.

The most opportune moments to capture the Upside-Down Fuji is on sunny days with no wind or fog to disrupt the water and reflection. These moments may be difficult to come by, but it will make for an unforgettable experience.

Red Fuji, or "Aka Fuji" in Japanese, refers to the moment when Mt. Fuji is painted red during the dawns of the end of summer to the beginning of autumn. Because Red Fuji depends on particular weather conditions of cloud coverage, fog, and sunlight, it only lasts for a fleeting moment and is considered a good omen if you manage to catch it!

Diamond Fuji is an optical phenomenon that occurs when the apex of the mountain just overlaps the sun. While this is one of the easier scenes of Mt. Fuji to capture, it is also dependent on weather conditions and the time of the year, so you won't always be able to see it.

The name Pearl Fuji comes from the pearl-like full moon when it appears right above the summit of Mt. Fuji. A full moon may occur every month, but the Pearl Fuji can usually only be seen in the clearer air of spring and autumn as the summer months tend to be quite misty, especially with the rainy season. This means it can only be experienced just a handful of times each year, but if you're lucky, you may come across this rare and mystical sight.

When snow piles up on the western slope of Mt. Hoei on the southeastern side of Mt. Fuji, a silhouette resembling a woman with long hair appears, affectionately called the "winter princess" by locals.

Fuji forehead, or "fujibitai" in Japanese, refers to when the hairline of a woman makes the shape of her forehead look similar to Mt. Fuji. There are many women portrayed with a Fuji forehead in ukiyo-e (Japanese woodblock) prints from the Edo period, and it is still considered a beautiful feature for women to possess in Japan today.

7. There Are Many Mountains in Japan like Mt. Fuji

There are other mountains in Japan that resemble Mt. Fuji, including Hokkaido's Mt. Yotei. While it stands at a much shorter 1,898 meters, the crater of the summit is nearly identical to that of Mt. Fuji with a diameter of 700 meters and depth of 200 meters.

Kagoshima Prefecture's Mt. Kaimon, also called Mt. Kaimon "Fuji", is located at the southern tip of the Satsuma Peninsula. While it only stands at 924 meters tall, the mountain's gentle slopes bear quite a resemblance to Mt. Fuji. Mt. Kaimon is a remarkable mountain itself, however, and would make a great addition to your trip itinerary along with other popular tourist destinations of Kagoshima Prefecture, including Kirishima City, Ibusuki City, and Yakushima Island.

8. According to a Japanese Idiom, Dreaming of Mt. Fuji on the First Night of the Year Brings Good Luck

There is an old Japanese idiom that says dreaming of Mt. Fuji on the first night of the year will bring fortune to the rest of the year. The full idiom says, "Mt. Fuji first, hawks second, and eggplants third". It is thought that all three were important features of Suruga Province (today's Shizuoka Prefecture), which had strong relations with Tokugawa Ieyasu who was the shogunate during the Edo period (1603 - 1868).

The first two are Mt. Fuji and the hawks that inhabited it, and the third is thought to be eggplants because Suruga Province was the fastest producer of eggplants back in the day. All three also have meanings of fortune attached to them, such as the grandness of Mt. Fuji, the grasping motion of hawks (signifying the ability to get whatever you pursue), and "accomplishment" for eggplants (the Japanese word for eggplants can also mean accomplishment).

Mt. Fuji is thought to have been formed by four stages of volcanic activity. The first occurred several hundreds of thousands of years ago, creating Mt. Senkomitake. This was followed by the formation of the 24,000-meter Mt. Komitake, and between 10,000 to 100,000 years ago, another nearby eruption resulted in Mt. Kofuji (translates to "Old Fuji" in Japanese).

Finally, around 10,000 years ago, recurring eruptions blanketed all three of the existing mountains to create Mt. Fuji (or Mt. Shinfuji, meaning "new Fuji"). It is thought that the first three stages of eruptions created the base, and the final stage built up the conical shape that we see today.

10. Mt. Fuji, the Mountain of Immortality?

Legends of Mt. Fuji as a mountain of immortality and everlasting youth have long existed in the area. The Japanese characters for Mt. Fuji can in fact be written to mean "no", "death", and "mountain". In The Tale of the Bamboo Cutter, which is thought to have been written during the Heian Period (794 - 1185), an old bamboo cutter one day finds a small child in a stalk of bamboo.

He raises the child with his wife, and she grows up into an impossibly beautiful woman. Her beauty is so impressive that princes and even the Emperor pursue her, but she declines all of their proposals. One day, she reveals that she is in fact a princess from the moon and that she must return. The emperor and all of his forces are unable to prevent her from leaving, and so she disappears, leaving the emperor with the elixir of immortality.

Fraught with sorrow and with no reason to live an eternally youthful life without the princess "Kaguyahime", the emperor climbs up the highest mountain and burns the elixir. From that point on, the mountain was called Fuji-san, "the mountain of immortality", and renamed in the Kamakura Period to the name still used today. Some believe that the characters for Mt. Fuji today mean "samurai", "abundant", and "mountain", after samurai who climbed the mountain.

The ideal temperature for the extraction of coffee is said to be roughly 90°C (194°F), so the altitude of Mt. Fuji makes it the perfect place to brew a brilliant cup of coffee. If you ever have the chance, this is an opportunity not to miss!

Mt. Fuji is a World Heritage Site and one of Japan's symbols. It is highly frequented by visitors hoping to witness its beauty, and for the more adventurous visitors, climb it. Around a third of the visitors to Mt. Fuji are from overseas and its popularity continues to grow. Despite its popularity, however, there are many exciting secrets about Mt. Fuji that even locals have never heard of! If you are considering visiting Mt. Fuji on your trip to Japan, make sure to bookmark this article to remind yourself about the useful sightseeing tips and information and also to impress people with your knowledge of Mt. Fuji!