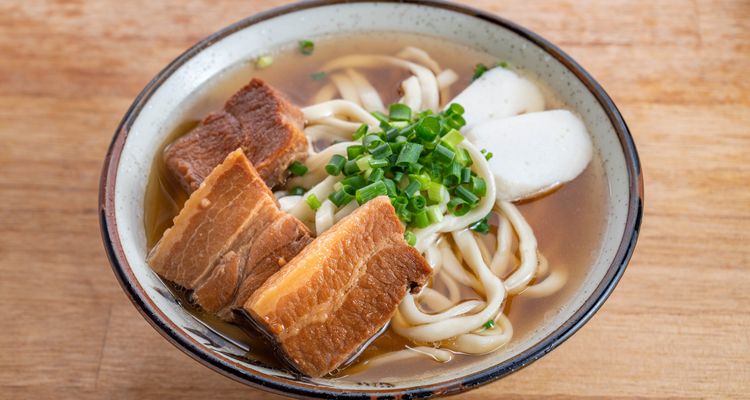 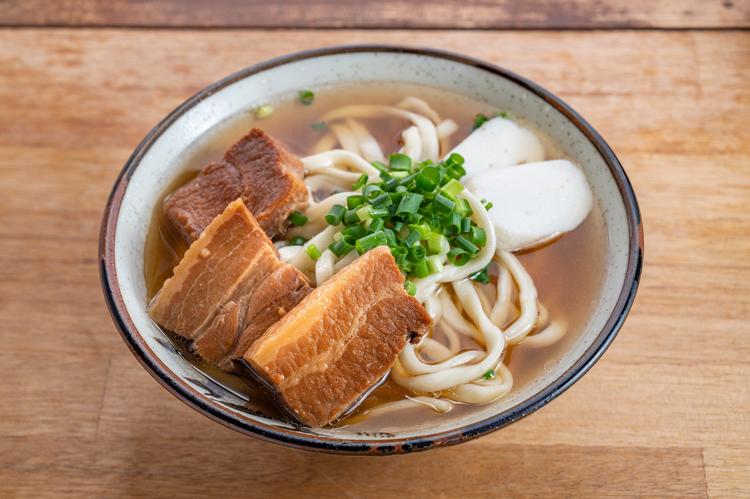 Okinawa, the southernmost Japanese prefecture made up of numerous islands, has incredibly distinctive local cuisine, inspired by its unique natural environment and historical background. This article will delve into 10 must-try local Okinawan delicacies, from the common to the obscure. Some of these foods are sure to pack a visual and flavorful punch, so be sure to add trying them into your Okinawa itinerary!

Made up of 100% wheat flour and ironically not using a lick of “soba” (buckwheat) flour, these noodles are known for their firm texture. The noodles are served in a flavorful broth made with pork bone and bonito stock. “Soki soba” comes with a topping of “soki” (spare ribs that have been simmered in sweet soy sauce), while “Okinawa soba” is garnished with “sanmainiku” (boneless pork belly) and “kamaboko” (fish cake). Don’t forget to add “benishoga” (red pickled ginger) and spring onion for a truly unforgettable bowl of noodles!

As the literal translation of this dish’s name suggests, “ashi tebichi” is pig’s feet soup. The meat of pig’s feet contains little fat and is full of collagen, so it is popular among beauty enthusiasts. The pig’s feet are parboiled and then slowly simmered with “konbu” kelp and daikon radish until it becomes soft and tender, making it quite easy to eat and a long-beloved dish among the elderly.

“Goya” (bitter melon), lovingly known as “the king of summer vegetables,” is full of vitamins and the star of this dish. As “champuru” means “jumble together” in the Okinawan language, it is stir-fried with pork, tofu, and egg, and the bitterness of the goya is sure to whet your appetite.

In the Okinawan language, “jimami” means “peanut,” and while the name of this dish has the same kanji characters for “tofu,” it actually contains no soybeans or nigari (bittern), instead entirely made from peanuts. Raw peanuts are ground up and then packed together with potato starch. It is known for its slippery texture and refreshing taste, often eaten with a stock-based sauce or soy sauce. The taste of the peanuts also goes extremely well with sugar or brown sugar syrup, so it also makes for a great dessert!

In the Okinawan language, “sata” is the word for “sugar” while “anda” is “oil” and “agi” is “to fry.” So, that would make “sata andagi”ーyes, that’s right—Okinawan doughnuts! Made with batter containing an ample amount of sugar, the outside is nice and crispy while the inside remains light and fluffy. You can see many people buying these popular treats as souvenirs!

“Tofuyo” is a delicacy made by fermenting “shima dofu” (“island tofu” - a kind of tofu commonly made in Okinawa) with “koji” (malted rice), ang khak (red yeast rice), and “awamori” (Okinawan liquor). It is often eaten as a side with alcohol, and unsurprisingly, it pairs amazingly well with awamori! It has a bit of a sticky texture, and many people find themselves addicted to this fermented food’s unique taste.

Although awfully similar to mainland Japan’s “buta no kakuni” (stewed pork), what makes “rafute” unique is that it is simmered in awamori! Sanmainiku or thigh meat with the skin still on is simmered in a mix of awamori and soy sauce to give it a spicy-sweet flavor, until it becomes so soft, you can break it apart with your chopsticks! It’s often seen as an Okinawa soba topping or dish for New Year’s or Buddhist memorial services.

Okinawan cuisine values using the entirety of the pig and not leaving anything left over, as can be seen in many of its dishes. Mimiga sashimi is made by boiling or steaming pig’s ears, slicing them, and then mixing them with cucumbers or bean sprouts. They are then dressed with a mixture of peanut butter, sugar, vinegar, soy sauce, and miso. The crunchy texture makes it a great appetizer with sake, and similar to dried squid commonly found in Japanese convenience stores, mimiga can be seen lining the shelves of convenience stores in Okinawa.

The “nakami” in the name of this dish refers to pork intestines, while “jiru” means “soup.” The pork offal (large intestine, small intestine, and stomach) are cleaned to remove the odor, simmered in bonito broth until tender, and are then seasoned with salt and soy sauce. Although this may seem like an oily dish, the taste is actually quite refined and refreshing. It is certainly a must-have during the Okinawan New Year!

This impactful dish contains a hearty amount of sea snake, called “irabu” or “erabu umi hebi.” The sea snake is dried and smoked for preservation. It is later slowly simmered to return it to its original state, and then seasoned with dashi stock. Other soup ingredients can include shima dofu, pork, konbu kelp, and vegetables. It is said to have many health benefits including being an analeptic, helping cure fatigue, and purifying the blood. Although it may look scary, it is a wonderful local delicacy that is great for the body.