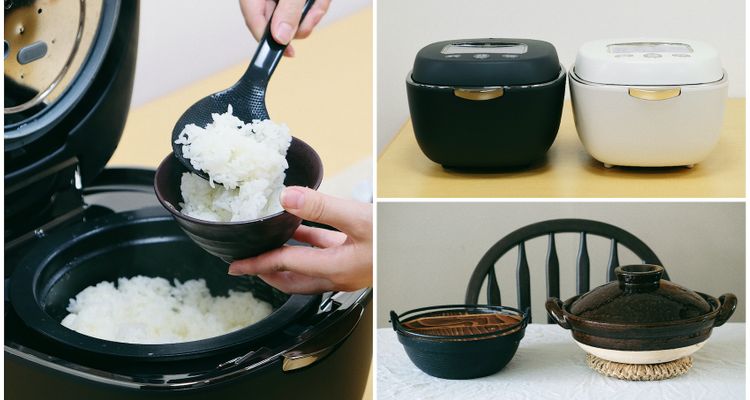 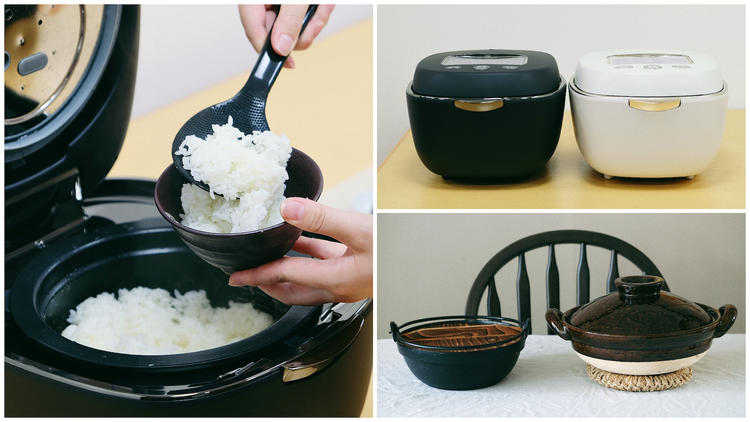 Whether you live in Japan or are just visiting, you’ve doubtlessly had the pleasure of enjoying Japanese rice. Even if you’re dining at an ordinary eatery, you can always expect a piping hot bowl full of gleaming white deliciousness with a hint of sweetness and an elegant aroma. Since rice is their staple food, Japanese people are very particular about it. From dozens of famous rice brands to an assortment of rice cooking innovations, you can clearly see the passion that Japan has for rice. In this article, we’ll take a closer look at Japan’s everyday rice cooking tools and try to discover what exactly makes Japanese rice so tasty!

In order to make a scrumptious bowl of rice, you first have to understand the fundamentals of rice cooking. The ultimate goal of this process is to cause changes in the rice’s starch molecules. As heat causes the rice to absorb water, each grain will slowly expand to become more gelatinous and sweeter. As water and heat are the two fundamental elements required to make starch undergo gelatinization, the key to making good rice is a pot that allows each grain to absorb as much water as it needs while evenly cooking them. To better understand this, we’ve chosen three rice cooking apparatuses commonly used in Japan, which we will explain in detail below.

The "Donabe" Earthenware Pot: A Beloved Treasure of Kyoto Restaurants

Bringing Out Rice’s Natural Sweetness with a Slow Cook

Japanese earthenware pots, known as “donabe,” are a traditional cooking utensil made from potter’s clay fired at high temperatures. They became Japanese household mainstays in the 1950s because they were much better at heat resistance and heat retention than metal pots, making them great at locking in the flavors of various foods. Earthenware pots emit far-infrared rays when heated, allowing for a steady transfer of heat that reaches deep into the center of each rice grain.

The fragrance and sweetness of Japanese rice come from the rice starch being turned into sugar by enzymes. It’s believed that enzymes work most efficiently in the 40-60°C range, and as donabe pots have a slow, moderate heating rate, they are ideal for heat retention, giving the enzymes enough time to do their work and bring out the rice’s natural sweet flavors.

There is one more benefit to using a donabe pot. Earthenware utensils actually have countless tiny pores on their surface, which absorb extra moisture after the rice is cooked and release it once the rice begins to cool down. This makes the donabe excellent at maintaining moisture, preventing the rice from drying up. That’s why rice cooked inside a donabe is so fluffy, has a springy mouthfeel, and boasts natural sweet flavors. At many Kyoto “ryotei,” a kind of high-class traditional restaurant serving Japanese cuisine, a donabe is a must-have utensil. In fact, donabe rice is a staple final dish in a traditional Japanese course. It’s easy to see why these pots hold such a special place in the hearts of Japanese people.

How to Make Delicious Rice in a Donabe Earthenware Pot

The secret to cooking rice like a pro is getting the perfect ratio of rice to water. When cooking rice in Japan, the traditional measurement unit is “go,” with 1 go being equal to roughly 150 g or 180 ml when measured in a rice cup. This will make roughly two servings of rice.

1) After filling the rice measuring cup, use a chopstick or a finger to flatten it out and make it exactly 1 go.

2) Transfer the rice into a separate bowl, wash it, and throw the water out. Then soak the rice in fresh water using 450-500 ml per 2 go of rice, 650-700 ml per 3 go of rice, and so on. The amount of water determines the hardness of the rice, so feel free to experiment and find the amount of water that yields the texture that tastes best to you. The rice should soak for about 30 minutes in the summer and 1 hour in winter.

3) Once the rice has absorbed plenty of water, transfer it and the water into the donabe pot. Place the pot directly in the middle of a burner to allow uniform heat transfer.

4) Cook the rice on medium heat for 8-10 minutes (the exact boiling time will differ depending on how large the flame is). Afterwards, lower the heat and cook for an additional 10-15 minutes. Once there is no more steam, turn off the gas and let the rice sit for 10 minutes. Do not open the lid too soon. Instead, allow the rice to steam and evenly absorb the remaining moisture, which will add to its flavor.

While using a donabe is an old, traditional cooking method, it only takes 30 minutes to cook 3 go of rice. As a bonus, these pots can also be used to steam food, make stews and soup, and cook all kinds of other dishes. It’s a super versatile piece of kitchenware to have!

The Rice Cooker: The Backbone of a Busy Modern Life

Cook Rice at the Push of a Button!

While rice cooked in a donabe is incredibly delicious, first-timers will need to pay constant attention to the heat in order to not burn the rice. In addition, the ceramic donabe pots are quite heavy and easy to break when dropped. With this in mind, many Japanese people have opted for the electric “suihanki” rice cookers, which can automatically cook rice at the push of a button. While rice cookers with programmable soaking and steaming times can take longer than a donabe to cook rice (30 mins to 1 hour), they’re super easy to operate and have an automatic timer function. With all those features and more, including excellent heat retention and low-temperature cooking, an electric rice cooker is an indispensable part of a modern lifestyle.

For those who are serious about their food, rice cooked in a regular suihanki cooker is often a little lacking in aroma and sweetness when compared to donabe rice. Despite their busy, modern lives, there are many who don’t want to sacrifice the joys of “food” for convenience. In response to this, Tiger Corporation - a Japanese leader in the world of appliances - has been researching ways to cook rice without losing its flavors or having to spend hours in the kitchen. Their solution is the “Donabe Pressure IH Rice Cooker,” which combines the best elements of donabe pots with the convenience of modern rice cookers.

In their pursuit of perfection, Tiger released the Donabe Gohobi Taki JPL-G100 in 2021, an upgraded version of their 50th anniversary model which is said to be one of the finest appliances of its kind that you can buy. “Pressure IH” comes from the combination of pressure cooking and electromagnetic “IH” induction heating technologies. The pot inside the cooker is a real donabe, made using Banko ware - a kind of Japanese pottery from Yokkaichi in Mie Prefecture, a famous producer of Japanese ceramics. It takes three whole months to make a single Banko ware pot.

The inner pot is capable of heating up to 280°C (most metal pots can reach approximately 130°C). This helps gelatinize the rice and bring out its natural sweetness through a new technological advancement called “multistage pressure structure” where the machine cooks the rice by carefully adjusting the pressure and regulating the steaming temperature. Additionally, through the newly-adopted “haritsuya pump” technology, the excessive amount of steam usually produced inside the pot when steaming at high temperatures is easily eliminated, leaving the rice firm and with a satisfying, springy mouthfeel to it.

How to Make Delicious Rice in a Rice Cooker

There are various tips and techniques for getting the most out of your rice cooker. For example, in the inner pot, it’s vital to ensure that there is exactly enough space for steam so that air and thermal energy can move around and distribute heat uniformly. The previously mentioned JPL-G100 rice cooker can hold exactly 5.5 go of rice which, generally speaking, is too large to properly cook a small amount of rice. To combat this, Tiger devised a special inner lid for the JPL-G100 model to use when cooking just 1 go of rice. By using this attached lid, you can control the space in the inner pot to perfectly cook rice for one.

Making rice in a rice cooker is super easy and recommended for beginners. Simply wash the rice, add water according to the measure written on the inside of the inner pot (depending on how many go of rice you’re using), and then choose how you’d like the machine to cook your rice. For example, with the JPL-G100, you can choose 5 levels of rice stickiness, from firm to semi-firm, standard, semi-puffy, and puffy. Select your preference and then choose the program that matches the kind of rice you’re cooking (white rice, brown rice, mixed grains) and you’ll have a bowl of steaming hot rice in no time! By using the JPL-G100, you’ll be able to cook high-quality rice rivaling that of a donabe, all while saving time and without worrying that you’ll mess it up.

Lock in the Rice’s Natural Sweetness With Direct, Even Heat

The tetsunabe pot is another traditional rice cooking apparatus adored by Japanese people. Made from iron, this thick pot boasts fantastic heat conduction and retention properties. The entire pot is designed to be heated evenly, and thanks to its exceptional convective effect, each grain is raised and cooked until deliciously soft. Once you open the lid, you will be treated to the invigorating aroma of perfectly cooked rice. Iron pots boil water quickly, allowing for longer steaming which locks in and maximizes the rice’s natural sweet flavors.

One of the reasons why the tetsunabe pot has become so popular in Japan is because when it’s heated to a high enough temperature, it starts to release dissolved iron ions. Simply by cooking with a tetsunabe, you’re getting a healthy supplement of iron, an essential mineral believed to prevent and treat anemia. Recently, many tetsunabe compatible with electric IH cooking stoves have also become available, which is great news for those living in houses with only IH stoves. However, tetsunabe are quite bulky and heavy, making them difficult to handle for some people.

How to Make Delicious Rice in a Tetsunabe

1) Similarly to the previously introduced donabe, we recommend soaking the rice in water before cooking it in a tetsunabe. After washing the rice, add 200 ml of water for every 1 go of rice (the amount of water can vary depending on the type of rice. Test and experiment to find a ratio that best suits you).

2) Once the rice has been soaked in water, place both the rice and water into the tetsunabe and bring it to a boil on medium heat for 10-15 minutes (the actual time will depend on the size of the stove’s flame). Once steam begins to gush out, lower the heat and cook it for a further 10-15 minutes until the bubbles have subsided and the water has evaporated. Turn off the heat and let the pot rest for around 10 minutes.

A Comprehensive Comparison of Each Rice Cooking Pot

The incredible commitment of Japanese people to delicious rice can be seen in their pursuit of the perfect rice cooker. Different rice cookers greatly influence the taste and quality of rice in their own special ways, so deciding which one is right for you is extremely important. In addition to the above, many Japanese people have also recently started using cast iron pots often employed in Western cooking. If you have the chance, we recommend cooking rice in a variety of pots using different methods to find one that matches both your lifestyle and your palate!