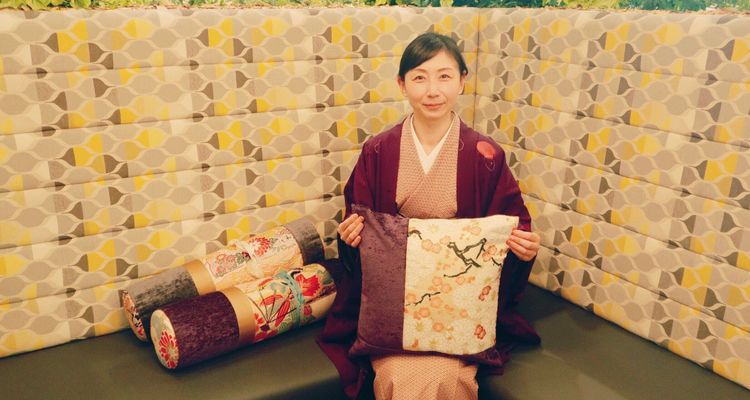 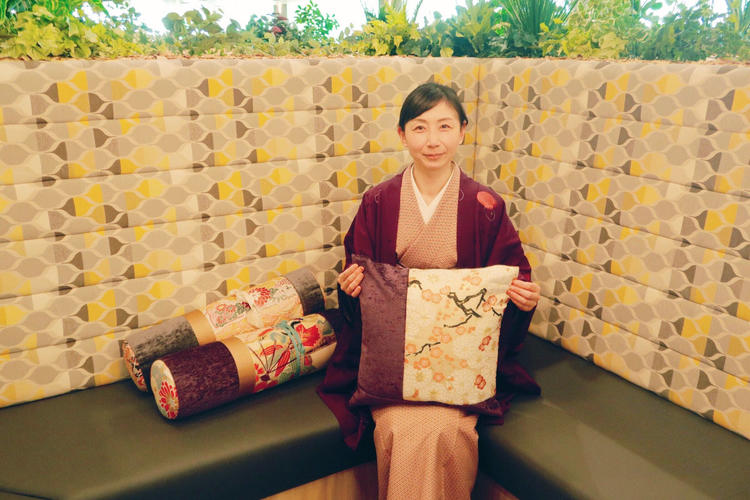 The best way to learn about a country is by getting to know the locals. With our interview series “People of Japan,” we’ll bring you even closer to Japan by introducing business owners, cultural ambassadors, and all-round amazing people in the country bonded by strong passions. In this installment, we interviewed designer Chitose Abe about her work upcycling kimono. These elegant symbols of traditional Japanese culture come in a dazzling variety of seasonal colors and chic designs. But what to do with a kimono that is no longer fit to wear? According to Chitose Abe and her friends who formed “F.O.A -Nouveau Japonisme-” in 2021, the answer is to give kimono sashes new life as stylish cushions.

When she was little, Chitose Abe would watch owners of traditional Japanese “ryokan” inns on TV dressed in their elegant kimono. Inspired by her childhood desire to be just like them, she eventually enrolled in a specialized vocational school to learn about the arts of kimono dressing, dyeing, and weaving. The more she studied, the deeper her passions grew, and after graduating, she joined a workshop practicing the famous “Gujo-tsumugi” traditional kimono weaving in Gujo Hachiman, Gifu Prefecture. There she became a pupil of one of Japan’s national living treasures, providing her with invaluable opportunities to learn all the secrets of the kimono.

As she dove deeper into this world, she began hearing stories from concerned friends and acquaintances about how their beautiful kimono and “obi” sashes have just been sitting untouched in drawers for years. Some of their truly exceptional pieces used for celebrations, funerals, and other special events would literally just be worn once before being forgotten forever in storage. Feeling guilty about wasting such extraordinary craftsmanship, many would give Chitose their unused kimono in the hope that they would find new life with her. This became the seed that eventually grew into F.O.A.

With fewer and fewer Japanese people wearing kimono, this part of Japan’s culture and its accompanying industries were at risk of being lost to time. To prevent this, Chitose sought to fashion some kind of practical, timeless product out of discarded kimono and obi material. She believed that if there was a way to reuse them, it would ensure their continued survival while contributing to a more sustainable society.

So, using her experience in interior design, Chitose set about challenging herself to turn kimono into some kind of interior decoration, eventually settling on creating cushions out of kimono and obi material.

In order to create a kimono obi cushion, Chitose turned to Hisanori Furuta from Takayama in Gifu, a talented seamster whose impressive reputation keeps him busy filling out orders from furniture stores all over Japan. Having worked together before, Chitose was certain that she needed Hisanori’s help to make her project a success. While he had never worked with obi before, he was intrigued by Chitose’s ideas and passion and so decided to join forces with her.

Soon after, they established the F.O.A brand of cushions made from obi fabric with 100% down filling. Since they are upcycled products, these cushions are imbued with the thoughts and love of the original kimono owner, making them all the more precious.

What Exactly Is an "Obi"?

By the way, we’ve used the term a lot already, but what exactly is an “obi"?

As we’ve mentioned, it’s a kimono sash - a long, sewn piece of cloth that is wrapped around the kimono to keep it closed.

While essentially serving the function of a belt, there are several key differences that set it apart. When wearing a kimono, you’ll first tie it closed with a string. The obi conceals the strings while keeping the kimono tightly in place and adding a splash of color to it.

Being both practical and decorative, it’s an essential part of many traditional Japanese clothing. Unlike Western clothing, kimono are not separated between small, medium, and large sizes. Kimono are generally one size fits most, which is done by folding the hems and fastening the obi to accommodate all body types.

So far, F.O.A has created two types of cushions: the square “Obi-za” and the cylindrical “Obi-bol.” Both feature gorgeous traditional Japanese designs that perfectly match modern sensibilities, making them fantastic interior decorations. The Obi-bol can be used as an elbow rest when sitting on the sofa, or as back support when lying in bed, like a bolster cushion.

F.O.A cushions pair particularly well with the rooms of traditional ryokan or Japanese-style hotels. They’ve also been used by people during wedding photoshoots at shrines to create the perfect traditional setting. The patterns of the obi sashes used to make these cushions have their own individual meanings, making it easy to find one that suits any and all occasions.

The F.O.A Philosophy of Upcycling

“These days, it’s easy to snap up bargains on old items online. But just because something is old doesn’t necessarily mean it should be cheap. Rather, old items have their own kind of value born from age. We’re hoping that our products will show that old doesn’t equal cheap,” said Chitose.

This is the basis of upcycling, where old or disposable products are given new life and gain value through innovative ideas and designs. Chitose and her team founded their business firmly upon this philosophy.

The Difficulties, Allure, and Satisfaction of Upcycling

For seamster Hisanori Furuta, the hardest part of his work is taking the obi and the cushion design chosen by Chitose Abe and putting them together perfectly to create a product that will be loved for years.

“A well-used obi is imbued with the feelings of the original owner. And as each obi is handpicked by Chitose, you can also find a little bit of herself in each sash,” said Hisanori. Because of this, Hisanori often wishes he could speak with the obi he upcycles and hear their stories about being stashed away somewhere for years, always fearing being discarded, before finally being reborn. But though the sashes cannot talk, their stories reside somewhere within them. Whenever he upcycles an obi into a cushion, Hisanori wishes them the best in their new life.

While upcycling does have its struggles and challenges, the seamster sees each part of the process as a test of his skills, which helps him focus on the good parts of it all. Making obi "happy" and saving them from being thrown away is why Hisanori Furuta keeps on creating. Rather than simply making products, Hisanori thinks of his work as giving old thoughts and emotions a new lease on life.

Shiho Omote, the sales representative at F.O.A, formerly worked in an industry known for mass production and consumption. During this time, she questioned how those making such cheap, disposable items felt about their work and whether so many people working together to sell things at such low prices was sustainable.

Shiho ended up helping Chitose start F.O.A with the desire to sell more authentic items at a price that properly reflected the efforts of all those involved. Each product, referred to as a “creation,” is given an individual name and imbued with meaning before being put on the market.

While that may sound expensive, kimono obi themselves often sell for hundreds of thousands of yen, with special celebratory versions sometimes going for close to one million yen. Some of the secondhand obi used to make the cushions are also antiques and therefore go for an even higher price.

Apart from the materials, F.O.A prices are even more understandable after factoring in the time and effort it takes to upcycle them. Once Chitose finds an obi and decides on the matching cushion cover material, Hisanori has to diligently sew for an entire day to complete the cushion.

Their creations are intended for those that can appreciate the true value of a secondhand obi and relish the story behind it.

Discover a Lifetime's Worth of Stories and Emotions Through F.O.A's Cushions

How to Buy F.O.A Cushions Online

F.O.A cushions can be ordered internationally through the company’s official website (some regions may be excluded due to shipping disruptions caused by COVID-19).

The brand name “F.O.A” comes from the initials of the founders’ surnames: Furuta, Omote, and Abe. The company workshop is located in Takayama, Gifu Prefecture, where new obi cushion creations are born every day.

F.O.A Cushions Making Their Way to Hotels and Inns

You can also check out the cushions for yourself at IORI STAY, a guesthouse service that allows travelers to book private stays at renovated traditional Japanese houses in the Hida region of Gifu Prefecture. IORI STAY is a favorite with lovers of retro Japanese aesthetics, and allows guests to experience the joy of F.O.A cushions and more, so consider visiting it if you ever get the chance.

F.O.A is currently working on introducing its cushions to other ryokan and hotels, so you might be seeing more of them in the not-too-distant future!

Aside from the official F.O.A website, those currently living in Japan can purchase their obi cushions from “tells market,” an online store selling ethical products that promote the creativity of craftspeople, support the preservation of traditional cultures, and respect the environment. Buying from tells market also contributes to helping protect forests.

F.O.A also plans to display their cushions at the Museum of Freewill & Future (MoFF) 2022 event, which will be held at the TRUNK HOTEL in Shibuya on September 9, 2022. Along with F.O.A, visitors to MoFF 2022 will be able to check out a stellar range of traditional crafts and more. Definitely stop by if you’re in Shibuya during this time!

Saving the Kimono Industry One Cushion at a Time

Every country has its own traditional clothing that they cherish. However, in the modern age, there are fewer and fewer opportunities to wear and enjoy traditional garb, putting it at risk of being lost to time. The creations of F.O.A are an attempt to save the Japanese kimono from that fate by making the clothing and its accessories more accessible and reminding people of just how wonderful they are.

From our talks with Chitose Abe and the team at F.O.A, it’s clear that they have a deep love for the kimono, and we hope that this article has convinced you that their creations are an expression of that love. If you ever get a chance to experience one of their creations firsthand, you should do yourself a favor and take it. There is nothing else like an F.O.A obi cushion out there.