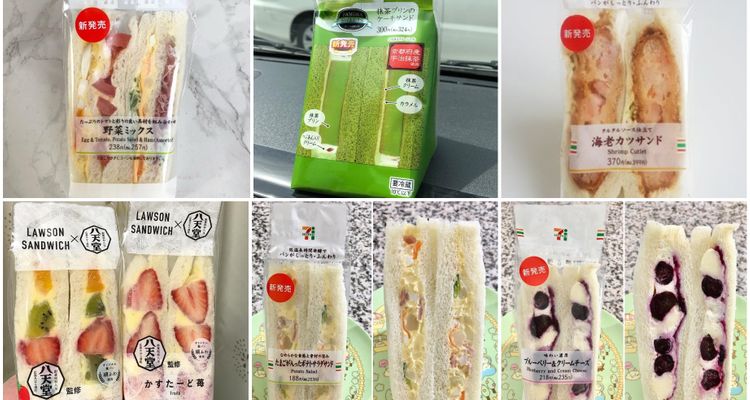 A Guide to Types of Convenience Store Sandwiches in Japan: Eggs, Shrimp Katsu, Noodles, and Even Fruit!

Japanese convenience stores are known for their widespread availability and shelves lined with mouthwatering snacks and meals. Just like everything else in these stores, the sandwich lineup is very impressive, with a variety of sandwiches spanning from classic combinations to uniquely Japanese inventions! We picked up a few select sandwiches from the three largest convenience store chains in Japan - Lawson, FamilyMart, and 7-Eleven - that you may come across during your travels!

How to Unwrap a Convenience Store Sandwich

First, before we get into what kinds of sandwiches you can find at convenience stores, let's go over how to properly unwrap a convenience store sandwich. It might seem like a simple task, but sometimes opening up these packaged foods isn't as intuitive as you'd expect! You might be thinking that you could just rip right into the plastic, but just like convenience store onigiri (rice balls), there's actually a correct way to unwrap it.

If you flip the sandwich over, you should see a small flap sticking out on the backside with an arrow on it. As seen in the picture above, you should pull this flap downwards.

Pull it all the way down (it shouldn't take any effort at all), and then gently pull it open from the slit you just made. And there you have it! Neat and tidy, and best of all, no smushed sandwich!

Convenience stores are known for their wide array of products, including ready-made meals, onigiri, and ice cream, which all come in an incredible range of flavors. And, as you'll read about below, they've even taken sandwiches to the next level! Varying fillings with tasty flavor combinations sandwiched between fluffy, soft white bread - you'll definitely want to try some of these!

Ham, cheese, and lettuce - what can possibly go wrong? Truly a classic combination, this one works great as a meal and a snack. It's not too heavy, and the crispy mouthful of fresh, sweet lettuce really gives it a big boost.

Roast beef really brings the sandwich game to a new level. And just because it was pre-made and packaged, doesn't mean they've compromised the flavor at all! Best of all, it's made with a Japanese-style sauce that uses soy sauce and wasabi!

Love pepper in your sandwiches? The ham slices in this sandwich are thoroughly peppered (you can even see it from here!). It's absolutely stuffed with layers of ham, so each bite is incredibly satisfying. You'll even get a kick of spice from the Japanese mustard!

Ham katsu and yakisoba, a strange sandwich topping abroad, but not so strange here in Japan. Yakisoba is a popular noodle dish made by stir-frying noodles with a medley of vegetables and meat and a sweet and savory sauce. Yakisoba is actually popular eaten as a filling in buns, which is called "yakisoba-pan" or "yakisoba bread." For this version, you can still enjoy this carb on carb combo, but with the addition of ham katsu, a deep-fried slab of ham! One half of the sandwich comes with just the yakisoba filling plus a layer of Japanese mustard.

Deep-fried chunks of shrimp with a healthy slather of tartar sauce and cabbage slices for a bit of a crunch. If you're a huge fan of fried food, you'll love this one. The fried cutlet is quite large in size, so it's nice and filling, and each bite is super juicy and meaty! Fried seafood doesn't feel as heavy as fried meat, either, so it's surprisingly light on the stomach.

Of course, chicken is always an option, too! It has thin slices of cabbage inside so you're not chomping down on just meat and bread, and it all comes together with a divine combination of tonkatsu sauce and mayonnaise!

Tamago sando, or egg salad sandwiches, have been gaining a lot of traction lately. This one's a special version from Lawson, which features egg in 4 different ways, hence the Japanese name "Egg! Egg!! Egg!!!" You'll notice it's really huge compared to the other sandwiches, and upon closer inspection, you'll see that it's four sandwiches instead of the normal two! The 4 styles of this particular sandwich are scrambled egg, tamagoyaki (sweet Japanese egg omelette), boiled egg, and egg salad.

As for regular egg salad sandwiches, you're guaranteed to find them just about anywhere! You might be thinking, "It's just egg salad though!" but it has actually gained a global reputation for its super fluffy and creamy filling. And, believe it or not, but the texture and flavors actually differ quite a bit depending on which convenience store you go to! Some are more chunky, and some are more creamy... so it's worth trying them all to see which one you like best! If you need somewhere to start, try out Lawson first - It's a well-known fact that the late Anthony Bourdain was a huge Lawson egg salad sandwich fan, and he even called them "pillows of love."

Or, if eggs are something you associate more with as a breakfast food, you could have several classic breakfast elements all in one.

If you're looking for something a bit more substantial with more bite, this one's a solid choice. You'll get layers of chicken lathered with teriyaki sauce, creamy egg salad, and sliced boiled eggs.

Potato salad isn't just good on its own. It's actually really tasty as a sandwich filling! Often times many other ingredients will be mixed into the potato salad, such as boiled eggs, onions, and ham.

If you like creamy salads, you could also try a fresh shrimp and broccoli salad!

Or even classic tuna salad with slices of avocado.

Convenience sandwiches are well-known for their wide assortment of various ingredients. Each pack comes with at least 2 pieces (two slices cut in half), so it's common to see different toppings on each half. You're likely to see any of the fillings above in a set together with another filling in a mixed assortment sandwich.

Fruit sandwiches are a big hit in Japan! "Dessert" and "sandwiches" may not seem like a likely pairing, but it's an ingenious invention that you have to try if you haven't had it yet. The type of fruits used depend on the season; when we went to pick up some sandwiches for ourselves, they had a few chunks of tangy and sweet fruits - pineapple, orange, melons, kiwi, and peach - all sandwiched between fluffy slices of bread lathered with whipped cream.

Some other fruity variations you might come across are grapes... (No need to peel the skin!)

...or even tropical fruits like mango! This particular one comes with a thick layer of mango sauce slathered between the mango and bread.

You can even find blueberries! They're often paired with a thick smear of cream cheese.If you can't get your bagel fix in Japan, these might be the next best thing.

Chocolate and banana are another classic combination that people all over the globe hold near and dear to their hearts. For this version from 7-Eleven, the banana slices are packed between layers of whipped cream and chocolate, and there's even small pieces of chocolate chips hidden within the whipped cream.

If you're really into custard (and really, who isn't?) you can even stumble upon sandwiches made with just custard, so you can fully bathe all your senses in sweet custard.

If it works in pie or cookies, it makes sense that it'll taste delicious in sandwich form! These types of flavors are more rare in comparison to a lot of the other dessert fruit sandwiches introduced, but that makes them even more of a treat! This one has apple chunks laid out between yogurt whipped cream and lemon custard.

You can even find pudding! In between layers of bread! And not just any bread, cake bread! If you're having a hard time wrapping this concept around your head, it's exactly what it sounds like: a layer of flan (albeit a bit smaller than the average flan, but it overall holds the same shape, with a nice caramel lining on top) with custard cream and whipped cream stuffed around it, which is then held together by slices of spongy and moist cake bread! Currently, we've only seen pudding sandwiches at FamilyMart, but it's possible that the others might come up with something similar.

There are other versions of this pudding cake sandwich as well, like strawberry!

Or even matcha! This one uses matcha pudding, matcha cream, and whipped cream with sweet red bean paste mixed into it. If you love matcha and Japanese sweets, you'll want to keep an eye out for this one. These flavors tend to be limited edition specials though, so if you see a flavor you like, be sure to get it before they pull it off the shelves!

With such a wide range of sandwich fillings, you'll definitely want to try some of these during your travels in Japan. Try some unique filling combos, but also be sure to try some familiar fillings to see just how tasty convenience store sandwiches can be!