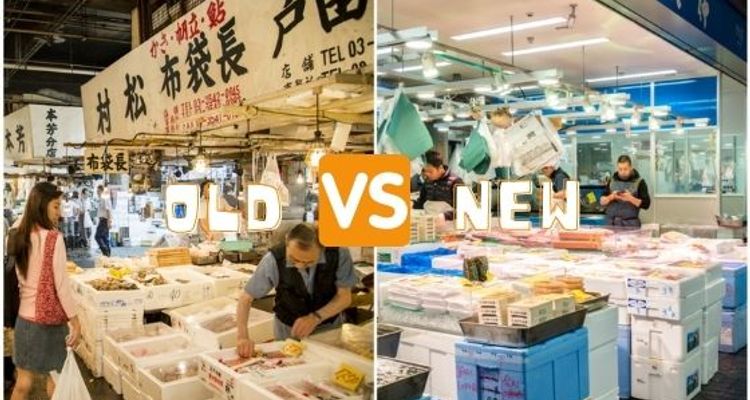 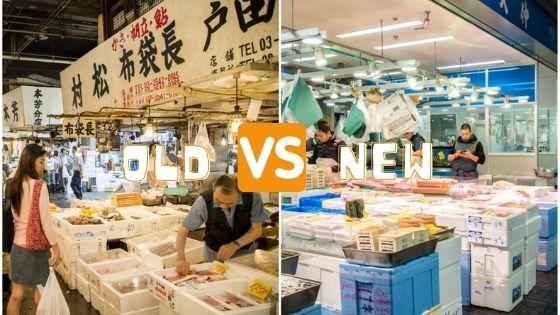 The Difference Between Tsukiji and Toyosu Fish Markets

The Tsukiji Fish Market has long been regarded as one of Tokyo’s most famous tourist destinations. Tourists would flock to the site before dawn for the opportunity to witness the high stakes tuna auction in action. However, in late 2018, the Tsukiji Fish Market shut down and was relaunched in the newly built location of Toyosu Market. With this significant change, plus the fact that Tsukiji’s outer market is still in action, it’s fair to say that there’s a little confusion about where to visit and what the current difference is between the pair. To set the record straight and to help give you a little guidance we’ve put together this FAQ run down on what happened, what’s on offer, where to go, and why.

The History Behind Tsukiji and Toyosu Markets

Tsukiji's famous fish market relocated to the sleek new, facility in Toyosu on October 2018. This was after a two-year delay which was marred by lengthy negotiations, political controversy and resistance from market regulars. The move was due to several issues, including health and safety concerns, developmental constraints, and a need to adequately accommodate the country's expanding tourist economy.

While Toyosu Market opened in 2018, the publicly accessible tuna auction which was previously held at Tsukiji reopened here in Toyosu in early 2019. Today it’s now running as smoothly as ever. Before you hop on that early morning train to catch the auction in action, here's everything you need to know about both these very different markets.

A Breakdown of Each Market’s Main Attractions

The major noticeable difference is Toyosu is a lot more sterile, which can be a negative or a positive depending on what you’re after. If it’s authentically local, and charmingly ramshackle food stalls and the energy of old Japan, Tsukiji is the place to go. However, if you’re more into seeing the auction and enjoying the pristine, tourist curated markets, Toyosu is for you.

Toyosu’s market layout has been carefully curated to adapt to tourists, while Tsukiji was born as a market for locals, and it maintains that energy. In Toyosu, everything is a little more segregated, viewing platforms are barricaded, and within the wholesale fish buildings, there are only about 40 food stalls. Size-wise, the Toyosu location is 1.7 times bigger than its predecessor. It’s slick and filled with tourist-centric attractions, like gift stores, QR information codes, and multilingual signage.

For the Tuna Auction, Go to Toyosu

The early morning fish auction has long been one of the city’s popular foodie attractions. Visitors stay up all night to get a good position with views of the action. While the auction is colloquially known as the Tsukiji Fish Auction, as of January 15, 2019, Toyosu started showcasing the auction from their sleek new public viewing platform.

Today the auction is run inside the fish wholesale building and takes place around 5:30 am - 6:30 am, but it’s advised you get there well before to avoid missing out on a view. The best way to get there directly from public transport is by walking from Shijo-mae Station.

There are two viewing points which offer access to the auction. The lower platform offers the closest view. To nab a spot here, you have to apply via the Toyosu website, which is free, but applications are due about a month in advance. The link is in Japanese, so for foreign guests it can be a little tricky to navigate. An easy alternative is to book a Private Toyosu Tour through tour company Voyagin.

The second, more easily accessible platform is the enclosed viewing gallery located a floor above the auction area. This platform offers a birds-eye view and doesn’t require pre-booking. To access this area, head just beyond the information desk, through a display room hosting feature exhibits on the history of the auction. As a little homage to the previous auction, the room also houses a life-size replica of the biggest bluefin tuna ever sold at the Tsukiji auction, in 1986.

For the Food Stalls, Head to Tsukiji

Although the tuna auction is no more, Tsukiji Market is still a lively culinary destination. It’s now more of a general food market, home to iconic labyrinthian laneways lined with vendors selling some of the best snacks in the city. If you’re starting early, begin your morning with a visit to Turret Coffee. The coffee shop is named after the ‘turret’ trucks that zoom through Tsukiji’s market.

Another local staple is cozy bakery stand Rupan. For something unique, sample the anko (red bean) croissant, which is a buttery, crumbly croissant filled with sweet and delicious anko paste.

At Tsukiji it’s hard not to eat until the point of explosion, however, be sure to save room for one particular stand, Tsukiji Shouro. Tsukiji Shouro is a tamagoyaki (fried egg) stand which sells an omelet sandwich so popular it typically sells out before lunch, so get in early.

Where to Go for Sushi

In short, Toyosu. Building 6 is where you’ll find the market’s most popular restaurants. Sushi Dai is the king of all sushi shops in the area. Here you can expect to see hungry punters start lining up before dawn to get a seat at the counter because the sushi is just that good. If you want to try it, you’d better be prepared to join that pre-dawn crowd as the restaurant often runs out of stock before 11am. To make the most of what’s on offer, go for the Chef’s Recommendation Course, which will cost 4,000 yen.

If you miss out on a spot at Sushi Dai, a visit to Nakaya Tsukiji is a worthy consolation. Nakaya Tsukiji is famous for its seafood donburi which is a bowl of seasonal seafood on a bed of rice, we suggest the Uni-don topped with creamy, sweet uni (sea urchin).

How to Get to Tsukiji

Tsukiji is a short walk from Tsukiji Station on the Hibiya Metro line. Alternatively, the closest JR station is Shimbashi, which is a 20-minute walk from the market. It’s a lot easier to access than Toyosu, as these train lines run through many of the city’s most popular tourist areas.

How to Get to Toyosu

If you want to get there in time for the auction, catch the Toei Bus (都営バス 市01) from Shimbashi Station at around 5am. This will get you to Toyosu Market Station (豊洲市場) within 25 - 40 minutes.

A Tale of Two Markets

While Toyosu took over for Tsukiji's main attraction - the auction - the two markets are definitely not one and the same. These contrasting and potentially competing markets showcase two very different sides of Japan. Tsukiji is old-world Tokyo, a little gritty, fast-paced and deeply rooted in the economic history of the city. Toyosu is representative of the new, tourist-pandering Tokyo; it's a shiny new attraction built just in time for the 2020 Olympics. If you have the time, try to visit both to get a more well-rounded perspective on the city's diverse culinary scene.