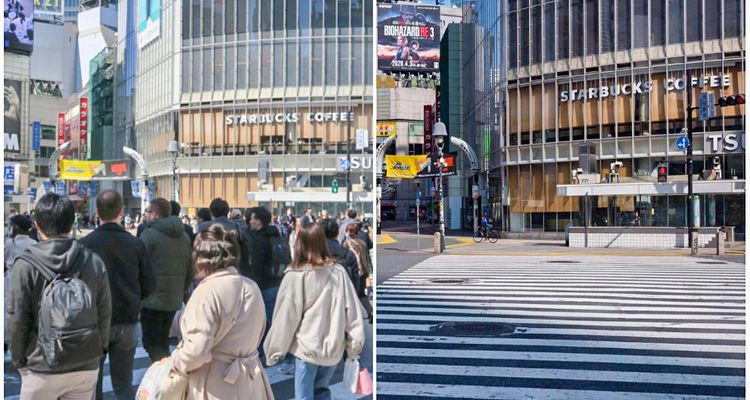 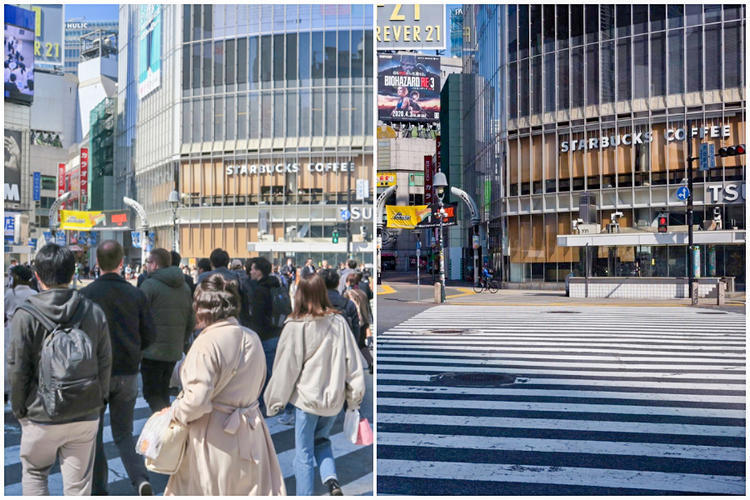 The Shibuya Crossing Is Empty!? Scenes from Japan, Before and During Covid-19

As the novel coronavirus spreads throughout the world, infecting hundreds of thousands, millions of people have been forced to cancel their travel plans, and billions more live under lockdown. Japan's social distancing strategy is more voluntary, but citizens have been told not to leave their homes unless absolutely necessary in order to flatten the curve. As a result, urban downtowns and tourist destinations throughout Japan have gone silent. Here are what normally vibrant, crowded destinations in Tokyo, Kyoto, Osaka, and other major Japanese cities look like, before and during the age of covid-19.

Narita Airport: Hear Your Steps Echo in the Concourse

Prior to the outbreak, Narita Airport was the foremost entryway to Tokyo, with a daily passenger count of about 120,000 people. However, once covid-19 started to spread globally, China banned overseas group tours to Japan and other countries soon followed. As a result, inbound visitors fell by 93% in March; visitors from China fell by a whopping 98.5%.

Shibuya: An Intersection Famous for Its Crowds Goes Silent

The virus' spread in Japan has recently accelerated, leading to the national government to appeal to citizens to self-quarantine. As a result, once-bustling entertainment districts have been bewilderingly quiet. Here is the famous Shibuya Scramble intersection in Tokyo - normally synonymous with hustle and bustle, even on weekdays - dead-silent in the afternoon.

Ginza: When Shops Close in a Fashion District

The main reason for this is because department stores in the city, such as the iconic Mitsukoshi and Isetan, as well as most other shops deemed as "non-essential" have been asked to close for the foreseeable future following the enactment of the state of emergency.

As a result, fewer people have been out and about. You can see the difference clearly in the two images below.

Department stores and cafes aren't the only businesses changing their hours. Museums and other tourist attractions have also closed their doors for the time being, for the sake of flattening the curve. We've compiled a broad list of institutions throughout the country that have closed, so check it out when you can.

Senso-ji Temple in the Asakusa neighborhood is the oldest temple in Tokyo as well as one of its most visited, attracting some 30 million worshippers per year. This figure is all but certain to crater this year. This is what the stalls that line the road up to the temple, Nakamise Shopping Street, look like usually and what they look like now. Some of the stores themselves are shuttered.

A further disappointment is that this pandemic spread during the cherry blossom (or "sakura") season in Japan, which is mid-March to early April. "Hanami" refers to picnics held in parks under the blossoms, and for the Japanese, it is a sort of annual ritual that marks the end of winter and the advent of spring. Hanami parties, of course, violate social distancing, yet many Japanese congregated in parks anyway. To prevent this, some parks have even roped picnic sections off to keep people away! (This is a drastic measure that most parks have not resorted to, but some have...)

Both photos are from Ueno Park in Tokyo - one from 2018, and one from this year. (The poster at the left side of the bottom photo is a request from management that hanami parties be cancelled due to the covid-19 pandemic.)

Ninenzaka, Kiyomizu-dera Temple: So Empty, You Can See the Pavement

It’s not just Tokyo, either. The collapse in international travel has hurt Kyoto particularly badly. In February, it marked a 54% drop in international hotel bookings. Here is Ninenzaka, the steps leading up to the Kiyomizu-dera Temple. (The before photo is from March 2018.)

Arashiyama Bamboo Forest: Stalks That Stand Alone Within the Quiet

Another popular Kyoto destination is the bamboo forests of Arashiyama - an ethereal, quintessentially Japanese sight that is extremely Instagrammable. The drop in visitors might, ironically, make this the perfect time to capture this forest's stillness and beauty - although we recommend against doing this!

Of course, this situation has put Kyoto's tourism industry in dire straits, so much so that earlier this year, they launched a new campaign called "Empty Arashiyama", using the empty forest as a selling point to attract more tourists. While we certainly don't recommend anyone visit now, we do encourage people to keep this mind for after it's safe to travel again!

The Dotombori area near Namba is Osaka's main entertainment district and is usually a bustling area with all sorts of theaters, clubs, and restaurants. Unfortunately, as Osaka has the second highest number of covid-19 cases in Japan, this once-bustling district has turned into a ghost town, with barely anyone walking through it.

The name “Dotombori” itself refers to a narrow canal, and the sight of throngs of people strolling along its banks with lights blaring from both sides in a Times Square-like display is the city’s foremost attraction. The lights are still here, of course, but there are many fewer people compared to before the pandemic.

Osaka Station: The Trains Are on Time, But No One Is Boarding

Osaka Station (or Umeda Station) is a major transport hub in the city, as well as one of the most gorgeous station buildings in Japan, featuring an enormous glass roof several stories high and a pedestrian plaza overlooking the platforms.

JR West announced in mid-April that passenger volume in the station fell by a whopping 88% over one weekend, and that foot traffic in the whole area fell by 93%. These drops were larger than other major stations in Japan, and were a sign that the stay-at-home requests by the government, while not mandatory, were effective.

Is the situation in Japan really that bad? If so, what is the government doing about it? We wrote an article that'll provide you with all the baseline information necessary to protect yourself amidst covid-19 in Japan.

Susukino: Hit By a Second State of Emergency

Susukino is the main entertainment district for Sapporo, the capital of Hokkaido. Hokkaido had been the first epicenter of the covid-19 epidemic in Japan and was the first to declare a state of emergency in late February. At one point, the situation seemed to abate, but as cases started surging nationwide in late March, Hokkaido eventually decided to reinstate its state of emergency.

Even in Transit, Covid-19 Has Left a Dent

With fewer travelers in total, it's unsurprising that transport has become nearly empty as well. The number of passengers on shinkansen east of Tokyo has fallen by as much as 60-80%, with similar trends in other parts of the country.

If you go on a shinkansen right now, you could possibly get a whole carriage to yourself! Or maybe not, as transit operators have started slashing less popular departure times in an effort to stay afloat.

While the emptiness of these once-bustling tourist destinations may urge you to visit them to have them all for yourself, please don't give into that urge. Travel has been a key way for the coronavirus to spread from prefecture to prefecture, and the government has been pushing forward initiatives to reduce person-to-person contact by 80% to stop the virus from further spreading. The closer we get to that mark, the shorter Japan's state of emergency will be, and the sooner Japan's cities can return to their lively, joyous bustle.