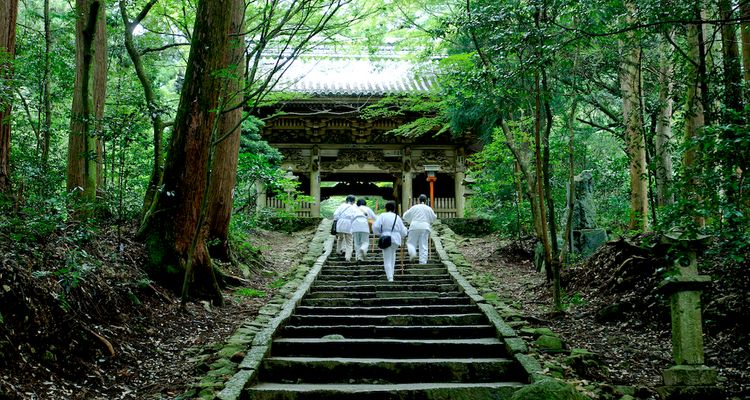 Ohenro - Shikoku’s Once in a Lifetime Buddhist Pilgrimage Experience

The word “pilgrimage” is sure to elicit images of devout religiosity and is more likely to make you think of Europe’s “El Camino” rather than a walk through nature in Japan. However, the island of Shikoku is home to one of the most unique, heartwarming, and beautiful walking pilgrimages in the world, called “Ohenro.” While Ohenro is Buddhist at its core, the journey is open to people of all backgrounds. It is a one of a kind spiritual experience tied to nature, the open road, and a special kind of hospitality only found in Japan. Join us today as we dive into the adventure of a lifetime, Shikoku’s Ohenro pilgrimage.

Ohenro is not the only pilgrimage in Japan, but it is arguably the most famous with its signature 88-temple trek around the island of Shikoku (the smallest of Japan's four main islands). The designated path aims to follow the footsteps of Japan’s most famous Buddhist monk, Kobo Daishi, and the travels he made around Shikoku while seeking enlightenment some 1,200 years ago. The 88 temples on the trek were all visited by Kobo Daishi, either for Buddhist training or prayer, and all of them have been designated as sacred places now. The act of visiting these 88 temples from Kobo Daishi’s travels is known as “Ohenro,” Shikoku’s special pilgrimage.

There are many reasons why you might want to go on the Ohenro Pilgrimage. Some do so to seek enlightenment. Others do it as a break from the repetition of their everyday life. Others still may wish to travel by foot in order to experience the natural beauty of Shikoku’s countryside at a slower pace. Whatever the reason, most people who set out on Ohenro all agree that it is an experience that changed their life. No matter what you were looking for when you set out on your journey, Ohenro is sure to deliver exactly what you need by the end of your pilgrimage.

The Founder of Ohenro: Kobo Daishi

In order to better understand the purpose and popularity of Ohenro, it is paramount to know about its founder, the man who first took the pilgrimage: Kobo Daishi.

Kobo Daishi, also known by the name Kukai, is one of the most famous Japanese people to have ever lived, as well as one of the most influential. Born in the year 774, Kobo Daishi accomplished many things in his life ranging from scholarly, spiritual, and physical feats.

He traveled to China to learn about Buddhism and brought the teachings back to Japan, founding the Shingon sect of Buddhism. In addition, he created the first public school for the common folk, was a legendary calligrapher said to have created the Japanese Kana alphabet (although the accuracy of this statement has been called into question), and traveled across Shikoku on foot visiting and training at 88 temples.

It was this last feat that solidified Kobo Daishi as a folk hero in the hearts and minds of the Japanese, and replicating his journey is what is known as Ohenro today.

Looking the Part: Dressing for Ohenro

One of the things that separates Ohenro from other well-known pilgrimages is the special attire. This pilgrim outfit will not only help you get into the right mindset but also brings with it the added benefits of being identified as an unmistakable pilgrim on Ohenro. The outfit consists of a white jacket ("hakui"), a neck sash ("wagesa"), a straw sedge hat ("sugegasa"), a bag ("zudabukuro"), a bell ("jirei"), and prayer beads ("juzu").

In addition to the pilgrim outfit, travelers on Ohenro also carry a special walking stick called a “kongozue.” This stick is said to help pilgrims embody the spirit of Kobo Daishi, and thus is an absolutely essential part of any Ohenro pilgrim’s gear. In fact, there is a term referring to the pilgrims on Ohenro as “Dougyou Ninin." This can be translated into something along the lines of, “Two people on the same path.” The inference here is that when performing Ohenro, pilgrims are said to always be with Kobo Daishi by carrying a kongozue.

In addition, the white jacket is of particular significance in Buddhist symbology. It is the same type of white clothing worn by the deceased for Japanese funerals. This may seem morbid at first, but the idea behind this practice is that by wearing the funeral dress, the pilgrim is on their way to the “holy land” of the afterlife.

It also ensures that should a pilgrim pass away on their journey, they will be prepared to attain Buddhahood. Having said that, in our modern age, the risk of breathing our last breath while on Ohenro is quite low, so the pilgrim's outfit has become completely symbolic.

You don’t need to don this outfit to perform Ohenro, but pilgrims who do are treated to a special kind of hospitality called “osettai,” which is unlike any other hospitality in Japan (or the rest of the world for that matter). We will go into more details of osettai later and what you can expect.

Getting to Shikoku: Where to Begin Ohenro

Ohenro is basically a circular walk around the island of Shikoku. Although Shikoku is separated from Japan’s main island by Japan’s inland sea, getting there is pretty straight forward.

To start the journey in the traditional way, from the first temple (Ryozenji), one should begin in Tokushima Prefecture. Flights from Tokyo’s Narita International Airport take only one hour and 15 minutes to arrive at Tokushima Awaodori Airport.

Conversely, there is also a highway bus from either Osaka Station or Namba Station to Tokushima Station, which takes a little under 3 hours and costs just under 7000 yen for a roundtrip ticket.

Ohenro Route: How to Do Shikoku's Pilgrimage

How Long Does it Take to Do Ohenro?

As mentioned above, there are 88 temples in total along the Ohenro route. Ohenro takes about 2 months to complete, depending on your health and walking speed, at a total length of about 1,200 kilometers.

However, it is a rare thing these days to be able to take a full 2 months off from work to travel as a pilgrim. As such, the route is popular among retirees and college students who are able to dedicate more time to the journey.

Having said this, it is also possible to do the pilgrimage in legs, taking a week here and there every few years to visit all of the temples. Also, although it is tradition to start in Tokushima and visit each temple in clockwise order (referred to as jun-uchi), there is no designated route that must be adhered to. Some people opt to travel the route in reverse order (gyaku-uchi), and there is even a legend that Kobo Daishi is still alive today, thus traveling in reverse increases your chances of meeting him on the road!

Do I Have to Walk?

Keeping with tradition does means traveling on foot, although in recent years some people have resorted to using bicycles and even cars to fast track between temples. Part of the allure of Ohenro, though, is getting into the ascetic mind of a pilgrim by foregoing modern conveniences in an effort to reach a spiritual awakening while on the road.

Many pilgrims even go so far as to sleep outside or in small guesthouses along the route. Although it is a stoic and physically challenging way to follow Ohenro, traveling by foot allows you to experience Osettai hospitality (covered next), which is not really possible to do when taking a car.

Osettai: A Special Japanese Hospitality Only Experienced by Ohenro Pilgrims

Osettai, simply put, is Japanese hospitality taken to the next level. Some translate it to mean “gift,” while others maintain that it is something closer to the word “alms” (considering the situation). Whatever the case may be, osettai has become a tradition in Shikoku and a key part of Ohenro.

Osettai often manifests in the form of gifts from strangers. Sometimes it will be a rice ball, other times a refreshing drink, but Osettai can also be expressed in other ways, such as reduced rates for pilgrims or even free, albeit rather spartan, lodging.

The purpose of osettai is to support the pilgrims along their journey, as those doing Ohenro are seen as proxies for others who are not able to make the journey themselves. Thus, it is believed that pilgrims should be shown gratitude and support, which is expressed through osettai.

Sometimes, visitors to Japan will describe the inhabitants of Tokyo as polite but distant. This is certainly not the case when it comes to pilgrims in Shikoku. While on Ohenro, you are sure to have heartwarming moments one after the other, all from the kindness of strangers. This is osettai.

Notable Temples on the Ohenro Route

Whether you choose to go on Onhenro in the traditional order on a sinlge 2 month adventure, or break up the journey into chunks while traveling in reverse, the goal is to eventually visit all 88 temples one day. You don’t even need to visit the temples in order! However, most people do choose to start from Ryozenji in Tokushima and end their pilgrimage at Okuboji in Kagawa prefecture. The following are a few notable temples along the way that you should be sure to visit during your Ohenro pilgrimage.

For a map of all 88 temples, see this user-created google map:

Located in the city of Naruto (a place famous for giant whirlpools!), Ryozenji is the first and perhaps most famous stop on the Ohenro route. Here you can buy all the trappings you need to look the part of a pilgrim, check out the two-story wooden pagoda, and marvel at the hustle and bustle of new pilgrims just starting out as well as veterans returning to the original place of departure.

Tairyuji is the 21st temple on the Ohenro route, but it holds a special distinction as the place where Kobo Daishi spent 50 days meditating as a youth. He sought to gain enlightenment but failed, and so continued on his way, carving out the path for the next stop on the Ohenro journey and adding to his legend. This temple is notoriously difficult to reach as it requires an accent to 610 meters above sea level. Luckily, there is a ropeway for people who might not be able to make the climb on their own.

One of the last stops on the Ohenro route, Yashimaji is number 84! Legend has it that Kobo Daishi carved a one thousand-armed Buddha statue here, which acts as the temple’s main motif. There are also a number of stone tanuki (Japanese raccoon dog) statues, which represent a local god called Minoyama Daimyojin. This clever beast is known for his antics and ability to shapeshift. He is also known as a deity of good marriages, happiness, and relationships.

As mentioned in the opening, Ohenro is an experience that can be enjoyed by people of any background, regardless of religious beliefs. Traveling the route is certainly a spiritual experience and feeling the warm hospitality of osettai from the people of Shikoku is something that will surely rest in your heart and mind for years to come.

Aside from the beautiful countryside and meditative peace of mind you can gain from Ohenro, you can also enjoy collecting intricate "goshuin" or temple stamps from each stop on your journey. For an in-depth explanation of this temple-hopping trend, please have a look at Complete Guide to the Goshuin Trend: Collect Japan's Gorgeous Temple Stamps!

Also, make sure to read the following article if you are unclear about how to properly pay your respects at a temple: The Differences Between Praying at Shrines and Temples in Japan