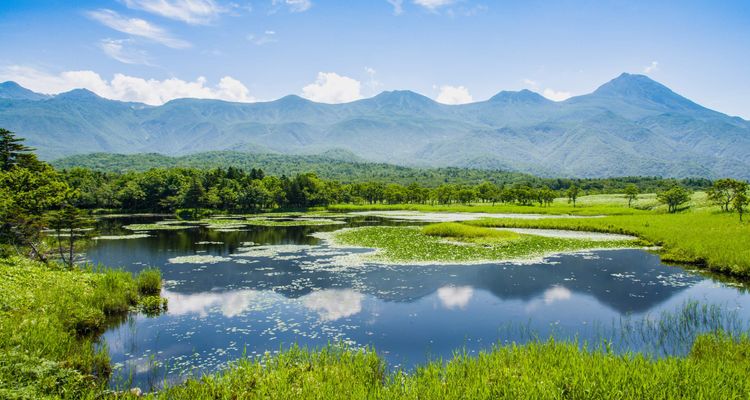 Accounting for roughly 70% of its landmass, the pristine, natural forestation of Japan’s biggest prefecture of Hokkaido is vast and abundant. From mountains created through volcanic eruptions to Japan's largest marshlands, Hokkaido’s six national parks perfectly capture the essence of Japan’s natural beauty. Here we’ll show off how best to appreciate these untouched wonders!

In Japan, national parks are selected via a rigorous set of criteria evaluating their scenery, beauty, convenience, and more. If chosen, the Japanese government will take on the responsibility of managing and preserving the site. However, ownership rights do not change, and there are often a surprisingly large number of people living within national parks in Japan. This differs drastically from a country like America, whereby the federal government owns much of the national park land rights and is responsible for resource conservation.

Japanese national parks are carefully selected in order to preserve history, scenery, and wildlife. They are also full of fun activities such as hot spring bathing, mountain climbing, and more, making them attractive holiday destinations for visitors!

In this article, we’ll explore all of Hokkaido’s six national parks, including what to see and how to enjoy them. Read on to discover what each has to offer and add a touch of nature to your Japan itinerary!

Rishiri-Rebun-Sarobetsu National Park is made up of three areas: Rishiri Island, Rebun Island, and the Sarobetsu Plain. All present an assortment of diverse terrain, including mountains, flower fields, sea cliffs, marshlands, and sand dunes. The park's iconic Mount Rishiri, a 1,721-meter-tall mountain with a 60-kilometer outer circumference, is said to resemble Mount Fuji, earning it the nickname “Rishiri-Fuji.” Its rough, rocky surface towering out from the coast aptly symbolizes the park’s grandeur.

The Sarobetsu Plain, which is on mainland Hokkaido opposite the banks of Rishiri and Rebun Islands, was formed over a period of 6,000 years and stands as Japan’s largest marshland. Born from an accumulation of dead plant material, the marshy bog now boasts over 100 varieties of blooming flowers scattered across a collection of roughly 170 lakes and marshes.

Rebun Island, which sits 8 km northwest of Rishiri Island, is filled with species of rare endemic alpine plants, earning it the nickname “The Island of Flowers.” Visitors will be treated to a colorful tapestry of rare flowers, many of which can’t be found anywhere else!

As Rishiri-Rebun-Sarobetsu National Park is large and isolated, you can enjoy it whilst avoiding other people, making it the perfect travel destination for social distancing.

Formed by volcanic activity and water currents, Shiretoko National Park sits on the mountainous Shiretoko Peninsula. Brimming with magnificent oceans, forests, rivers, and mountains, it is home to a vast assortment of wild animals. Recognized for its precious ecosystem, it was officially designated a Natural World Heritage Site in 2005.

36 species of land mammals and 22 species of ocean mammals have been found living in Shiretoko. Among these, the most famous inhabitant is arguably the brown bear, which is the largest land-based animal in Japan. There are estimated to be at least 200 bears living on the Shiretoko Peninsula - a large number even on a worldwide scale! Other native animals include the critically endangered Blakiston's fish owl and the white-tailed eagle, along with loads of other captivating birds of prey. For those looking to spot wildlife, you’re guaranteed to discover something in Shiretoko! With a wide walking trail ensuring social distancing, now is a better time than ever to visit!

The breathtaking Akan Mashu National Park rests upon Japan’s largest caldera (a basin formed by volcanic activity) and presents a stunning collection of dynamic terrain, including the three caldera lakes of Lake Akan, Lake Kussharo, and Lake Mashu, along with other volcanoes, lakes, and forests.

The park is largely divided between the Akan area and the Mashu (Kawayu) area. The Akan area is known for its dazzling sights, including Mount Oakan, Mount Meakan, and the enormous Lake Akan. Highlights in the Mashu (Kawayu) area include the extraordinary transparent waters of Lake Mashu along with the awe-inspiring Lake Kussharo, which can be viewed in its entirety from numerous surrounding mountains and passes. The mind-blowing scale of the natural beauty on display needs to be seen to be believed!

Kushiro-Shitsugen National Park is comprised of the Kushiro River and its tributary streams flowing into Japan’s largest marshland of Kushiro Marsh in eastern Hokkaido. Surrounded by hills and mountains, the expansive views of the sweeping flatlands fills one with a humbling sense of awe.

Within the largely untouched nature lives an estimated 39 species of mammals, 200 species of birds, 5 species of reptiles, 4 species of amphibians, 38 species of fish, and over 1,100 species of insects. Of particular note is the Japanese red-crowned crane, which was rescued from the brink of extinction thanks to conservation efforts. This elegant bird can now be found in the Kushiro Marshland and other places in eastern Hokkaido.

Located in central Hokkaido, Daisetsuzan National Park is most recognized by Mount Asahidake (2,291 m), a part of the Daisetsuzan Volcanic Group and Hokkaido’s tallest peak. The mountainous national park also incorporates Mount Tokachi and the Tokachi Mountains, the Ishikari Mountains, and more. Creating the headwaters to Hokkaido’s iconic Ishikari and Tokachi Rivers, the park is often referred to as "The Roof of Hokkaido."

While many of the roughly 2,000-meter-tall mountains here pale in comparison to the 3,000 m mountains on mainland Japan, the high latitude contributes to creating a formidable alpine environment. For this reason, both conifers and broad leaf trees surround the base while forests of birch and other high alpine vegetation dot the peaks. The Daisetsuzan National Park website has a map displaying where people are likely to gather; visitors are encouraged to use it to avoid crowded places.

Shikotsu-Toya National Park is based around the two large caldera lakes of Lake Shikotsu and Lake Toya alongside the volcanoes of Mount Yotei, Mount Usu, and Mount Tarumae. Known as the "museum of living volcanoes," the sheer variety of localized volcanic activity has generated a tapestry of hot springs, sulfur spouts, and other surreal phenomena. This volcanic group has since been officially recognised as the Toya-Usu Global Geopark, Japan’s first, in honor of its outstanding geography.

Lake Shikotsu, which was formed by volcanic activity approximately 32,000 years ago, is Japan’s second deepest lake with a maximum depth of 360 m. The cold climate and lack of sediment flow has made it incredibly transparent, which is best appreciated up close!

With a staggering variety of natural wonders, each of Hokkaido’s six national parks has something special to offer! Dive into ancient ecosystems and treat your senses to overwhelming beauty with a trip to one or more of Hokkaido’s incredible national parks!