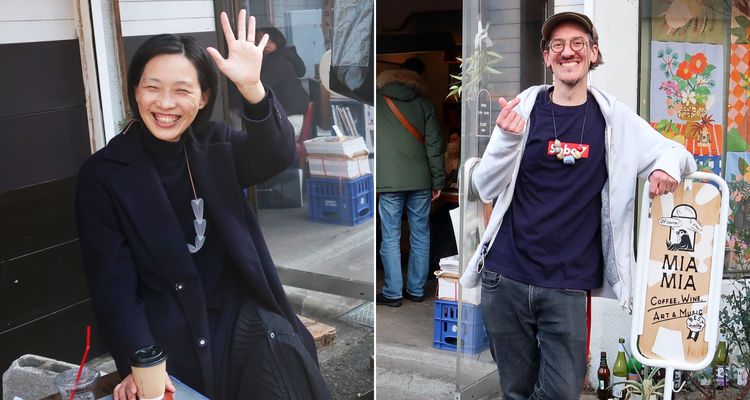 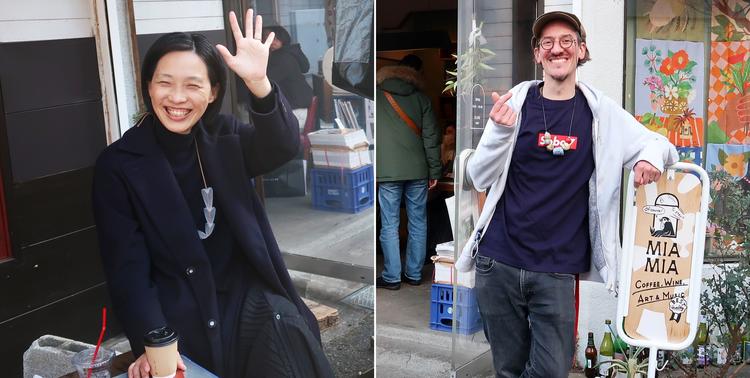 The best way to learn about a country is by getting to know the locals. With our interview series “People of Japan,” we’ll bring you even closer to Japan by introducing business owners, cultural ambassadors, and all-round amazing people in the country bonded by strong passions. In this article, we'd like to introduce Vaughan and Rie Allison, the passionate owners of MIA MIA and I AM, a coffee shop and gallery respectively, tucked away in the northwestern Tokyo neighborhood of Higashi Nagasaki.

Vaughan is a man who wears many hats, keeping himself busy with several endeavors, including as a model, music producer, and coffee enthusiast. "I am influenced by and have learned so much from the different worlds," he tells us. He mentions how he has spent the last 20 years focused on human interactions, writing pieces for lifestyle magazines and being involved with the local coffee scene for 15 years.

When asked how he balances his time between different projects, "I don't," he laughs. Arriving in Japan during the country's 3rd wave of specialty coffee, he has spent much of his time familiarizing himself with indie coffee shops all around Japan, and he estimates that he has been to over 1,000 shops. He mentioned a list that he kept of coffee shops, cafes, and bakeries that he planned to visit even before opening MIA MIA, but chuckles at the fact that he has never been able to get through all of them. "I always ask baristas what other coffee shops they recommend, so the list never gets any shorter."

Rie's main line of work is architecture, which she has been doing for over 10 years and now even has her own business. She finds inspiration in her everyday life, from meeting and seeing people to having conversations. "Architects are becoming hubs of communication, so you need to work with your team and make sure you are talking with people," she explained.

Although neither Vaughan nor Rie are originally from Tokyo (he is from Australia and she is from Miyazaki Prefecture), they found themselves settled in a quiet neighborhood in Tokyo. "Tokyo has the best of everything," Vaughan says, "If you have the time to look."

Higashi Nagasaki - Finding Their Niche in an Artistic Neighborhood

To interview Vaughan and Rie, we found ourselves in Higashi Nagasaki, an unassuming neighborhood dotted with quaint eateries and tiny shops. There was not a large chain store in sight - a fact that Vaughan and Rie prized during their 5-year journey to find the perfect area to open their coffee shop.

Higashi Nagasaki is located in the western part of Toshima-ku, the home of neighborhoods such as Kanamecho, Nagasaki, and Chihaya. From the beginning of the Showa period up until World War II, it hosted groups of rentable houses equipped with ateliers for single students studying painting and carving, earning it the nickname “Atelier Village.” During its heyday, over 100 artists such as painters and carvers lived in the neighborhood, and this artistic atmosphere appealed to Vaughan, as he detailed how Higashi Nagasaki used to be an artists' residency. "You can find a lot of apartments that allow instruments, so you can tell that there must have been a lot of artists living in the area."

Vaughan and Rie continue to contribute to this artistic atmosphere, utilizing their creative backgrounds to start projects that can also involve the local community. In addition to MIA MIA, with its fun and funky atmosphere, delicious coffee, and beautifully designed merchandise, their gallery, I AM, showcases and sells pieces from Australian artists. Rie handpicks the artists to introduce, with the featured artist changing every three months.

We first met up with Vaughan and Rie at I AM, which they describe as a "cultural kiosk," and Vaughan enthusiastically walked us through the different projects they started at I AM to engage the local community.

In the front of the gallery is a small community garden that local children can help tend, and Vaughan told us that elderly people often come to give gardening tips. The gallery also acts as a community compost station, with composting drawers in front and a large composter behind the gallery. "People can come to drop things that they want to compost off, and come back if they ever need compost for their gardens," Vaughan noted as he pointed out the different compost spots.

There is even a little book post out front that acts as a tiny library, with Vaughan and Rie's intention being that everyone can read and share the same books. With open architecture and interactive designs, Vaughan and Rie wanted to create inclusive spots where everyone is welcome, from the young to old, and even pets!

Answering a Local Need – The Inspiration for Opening a Coffee Shop

Vaughan has a clear talent for creating interpersonal relationships, which Tokyo can be a difficult environment for.  "We're living in an online world," Vaughan explained, "so it's important to interact with people. We are trying to spark some of those interactions." According to him, no interactions create a sad atmosphere. Interactions always lead to something, and can help people in the future in many different aspects, such as having someone to rely on during a time of need or even as a mood booster. "From the little things, big things grow," he commented.

Vaughan and Rie both mentioned how coffee shops usually have friendly staff in Australia, with indie coffee culture having such a strong hold it is difficult for even large coffee chains to survive. Meanwhile, while also home to many small indie coffee shops, Japan is overrun with coffee chains, which can't offer the same type of interpersonal service. "A lot of people get their coffee from chains, vending machines, or convenience stores, Vaughan noted, "There's no sense of community there."

"We wanted to bring some of that Australian friendliness to Japan," Rie told us.

"Mia Mia" (pronounced mah-ya mah-ya) is an aboriginal Australian word that means "shelter." While touring around Australia, Vaughan and Rie came across a mia mia, which were huts traditionally made from local wood where friends and passersby could gather and "just be." After hearing the explanation of the word, they instantly knew it would become the name for their new watering hole.

Testaments to Vaughan's ideology that interactions bring opportunity are the several contributions made to the coffee shop by incredible talents and friends of Vaughan and Rie – the logo was designed by Paik Design Office, and the cups are original pieces by yumiko iihoshi porcelain.

While their shops easily blend into the Higashi Nagasaki townscape, the charming establishments remain lively with locals and visitors who are welcomed and encouraged by Vaughan and Rie. The design of an establishment is essential in making people feel welcome, and Vaughan and Rie were sure to point out how the windows and doors are always open, "even in winter," laughed Vaughan.

Rie's architecture skills played a big part in the design of MIA MIA and I AM, which she can return to when she wants to see how an architectural element worked out in the real world - something that many architects can't or don't do. When renovating the space for MIA MIA, they made sure to keep the shop as open and airy as possible, such as changing the windows so they could open and configuring the interior so it is easy to converse and interact with the staff and other customers.

Even the placement of the espresso machine was carefully thought out, finding the best position for staff and customers to interact and prevent anyone from feeling shunned.

On designing the space, Rie said: "Balance is important. It couldn't be too fashionable, or people would find it difficult to enter. People can relax in familiar spaces." Her attention to detail proved fruitful, with both the interior and exterior of MIA MIA giving off a fresh, artistic vibe while remaining welcoming enough for people to leisurely spend time in and around the shop.

During our time at MIA MIA, we watched Vaughan and Rie welcome and interact with customers, from regulars to first-timers, with large smiles and open arms. Vaughan would recognize locals passing by, excitedly greeting them and cracking inside jokes, and Rie would easily slip into conversation with customers hanging around the shop.

Rie explained the mentality they want their employees to have while working at MIA MIA - they do not want the staff to feel restricted by the norms of formal Japanese customer service, but instead want them to act like themselves and freely interact with customers. In fact, they encourage staff to create a relaxed atmosphere and get patrons to open up.

"The human element is what brings regulars," Vaughan mentioned as he waved goodbye to a local customer who visits almost every day. "Coffee shops need to become parts of people's daily lives. If you have the right heart and mindset, the small places will always win."

Being a Part of the Community: A Coffee Shop Requirement

Both Vaughan and Rie grew up in hospitality environments, which is evident in their interactions with customers and how they look to run their businesses. "You need to fulfill the needs of guests before they even know what they need," Vaughan said to us.

Vaughan is originally from Australia, a land of great coffee and equally great service. His parents owned their own restaurant, where he worked part-time when he was younger. "I've been around coffee my whole life," he explained. "The espresso machine was my toy."

Rie, on the other hand, grew up in a family that owned an izakaya. She believes this helped shape her personality, as she finds more comfort in louder places than quieter ones. Now, even as an architect, she finds herself as a catalyst for human interaction. "Architecture is an interesting job, because you can make spaces and connect people," she explained to us.

Both Vaughan and Rie noted that one of the criteria they use to gauge the quality of a coffee shop is how well the baristas know the surrounding area. "Whenever I travel, I always stop at a coffee shop and ask the barista where I should go," said Rie. Vaughan also added how he makes a point to talk to the staff and customers to understand the vibe of the coffee shop.

They aspire to be this kind of establishment for Higashi Nagasaki – they even commissioned a Japanese artist to illustrate a beautiful map of the Higashi Nagasaki neighborhood. The map can be viewed on the door of MIA MIA, and they sell copies at the shop for those who want to take it exploring or even want cute memorabilia of the area. "I don't like the idea of people just coming for the coffee and then heading back on the train, I want them to explore and see what else there is around Higashi Nagasaki," Vaughan expressed.

Vaughan and Rie Guarantee to Put a Smile On Your Face

After some lively chats and tasting some delicious coffee, we realized it was time for us to bid adieu. We were given a hearty send-off, and happily discussed the amazing time we had while the chatter of the coffee shop got quieter in the distance. MIA MIA also transforms into a bar at night, for those who are more keen to visit in the evening. If you are ever in the area and need some good coffee and conversation, visit Vaughan and Rie at MIA MIA!