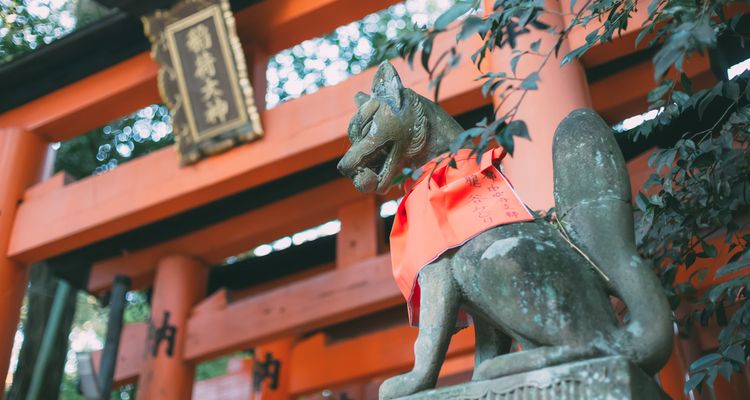 Everything to Know About the Inari Fox - Japan's Cutest Sacred Animal

If you’ve ever visited a shrine in Japan, odds are pretty good that you’ve come across one, if not many, stone fox statues. These iconic statues, known as Inari foxes or kitsune, can be found at over 30,000 shrines throughout the country. Sure, they’re cute, but have you ever wondered what the meaning behind these statues is? Read on to learn more about the Inari fox’s place in history and modern Japanese culture!

What Is an Inari Fox?

In the Japanese Shinto faith, there are many different gods of the natural world. Similar to other polytheistic religions, there is a god representing most things, such as a god of the sea, another for the sun, and so forth. The god Inari is said to be connected with rice, tea, and sake. Given how important these three things are to Japanese culture, it comes as no surprise that over one-third of all Shinto shrines in Japan are dedicated to Inari.

According to legends, the gods will often choose animals to act as their avatars or messengers. In the case of Inari, this animal is depicted as a white fox. Because of this, many Inari shrines will feature several small fox statues that serve as shrine guardians.

What Do Foxes Represent in Japanese Culture?

In Japanese folklore, foxes are often portrayed as possessing heightened intelligence and longevity. These desirable qualities made the fox a staple image of the traditional art style known as "ukiyo-e" (Edo-period woodblock prints). In particular, white foxes, said to be Inari's chosen messenger, are believed to serve as guardians against evil spirits. Taking this a step further, the stone statue depictions of Inari foxes found at shrines are commonly seen wearing red bibs. In the Shinto faith, red is the color of the gods and is said to ward off disease and malevolent energy.

While highly regarded for their benevolence, foxes also have a reputation for being tricksters. In many stories from Japanese folklore, foxes are seen causing mischief to punish those who have been greedy or boastful. A common theme found throughout these tales is that of the fox shapeshifting into the form of a beautiful woman, lost and in need of help. After inviting this mysterious woman in to spend the night, the homeowner awakes the following morning to find the woman missing along with their food and valuables. Particularly mischievous foxes have also been said to shave the homeowner bald while they are sleeping.

While far fewer people practice the Shinto faith today, many of its traditions and customs are still incorporated into daily life in Japan. The image of the Inari fox is one such persistent reminder of these traditional roots.

While nigiri sushi (thinly sliced fish over a pillow of sushi rice) is a familiar sight for most people, inari sushi (called inarizushi in Japanese) is much less commonly known outside of Japan. This staple side dish, found at sushi and noodle restaurants, features slightly sweet tofu skin called "aburaage" that is fried, formed into a pocket, and filled with sticky sushi rice.

According to folklore, foxes' favorite food is aburaage. Combine this with rice (which you'll recall Inari is the god of), and it's easy to see why the name inari sushi was chosen. Depending on where in Japan you are staying, you may find that inari sushi has a different flavor or is served in different shapes. In the east, it is often formed into a rectangular shape, representative of the large bags rice is packaged into and filled with nothing more than vinegared rice. In the west of Japan, inari sushi has a richer flavor and the rice is commonly mixed with vegetables and other ingredients. In addition, the shape is typically triangular, supposedly to represent the shape of a fox's ear.

While attending a festival in Japan, you will often come across a stall selling a variety of colorful masks, among which you might see a white kitsune mask. These kitsune masks were originally used in Shinto ritual dances and Japanese theater productions but now are more commonly found as decorations meant to invite prosperity. However, kitsune masks are still used in some rituals, the most famous of which takes place each year on New Year's Eve. According to legend, foxes used to take on the form of humans and visit Oji Inari Shrine in Tokyo on this day. To commemorate the event, hundreds of participants don kitsune masks or paint their faces like foxes during the annual Oji Kitsune-no-Gyoretsu Fox Parade.

As ubiquitous as anime has become in Japanese culture, it should come as no surprise that the Inari Fox has made an appearance in many different TV shows and manga including popular works such as Pokemon and Naruto. Notably, the manga and anime Inari, Konkon, Koi Iroha features a young girl named Inari Fushimi who saves a fox pup from drowning in a river. The goddess of a nearby shrine takes notice of the kind act and rewards Inari Fushimi with the power to transform into other people, much like the foxes of Japanese folklore are said to be able to do. The light-hearted series takes place in Kyoto and features real-life locations like the famous Fushimi Inari Taisha (mentioned below) making it a fun read or watch for fans of the city.

Interested in checking out some Inari fox statues in person? There is no better place to do so than at a shrine dedicated to Inari. These sacred locations, often marked with bright orange torii gates, are typically home to several fox statues. With over 30,000 Inari shrines throughout Japan, finding one shouldn't be an issue. For a little help when choosing which one to visit, here are a few of our favorites.

Considered to be Japan's main Inari shrine, Fushimi Inari Taisha in Kyoto is easily the most iconic as well. With its seemingly endless tunnel of 10,000 bright orange torii gates, it has understandably become one of Japan's must-see tourist attractions. If you follow the entirety of winding trail, you will find yourself at the summit of Mount Inari in roughly one and a half hours.

While the area is often crowded with tourists, those hoping to get a photo of the famous torii gates without other people in the scene aren't completely out of luck. The shrine is open 24 hours a day, so early risers have a much better chance to capture a photo like the one above. Kasama Inari Shrine in Ibaraki dates back over 13 centuries and stands as one of the three largest Inari shrines in Japan. While it doesn't boast nearly as many torii gates as Fushimi Inari Taisha, its impressive architecture still attracts over 3.5 million visitors from around the world each year. In particular, the New Year's holiday tends to draw over 800,000 people in the span of just three days. One of the shrine's most eye-catching features, a pair of 400-year-old wisteria trees, creates a stunning canopy of delicate purple flowers each May. The area of Kasama is also famous throughout Japan for its ceramic wares, so be sure to keep an eye out for a handcrafted Inari fox souvenir to take home!

As you enter the grounds of Toyokawa Shrine, you'll find yourself passing by a traditional torii gate as well as the ever-watchful gaze of two Buddhist Nio guardians. An uncommon but not completely unheard of occurrence, Toyokawa Inari Shrine in Aichi Prefecture serves as both a Shinto shrine and Buddhist temple. This sacred space features beautifully preserved buildings that date back almost 600 years, but most famously, it is home to thousands of Inari fox statues spread throughout its 13 square kilometer property. In what is easily one of the largest concentrations of Inari fox statues of any shrine, these red-bib-clad shrine guardians cover the hilly terrain in an otherworldly and unforgettable display of respect to Inari.

Motonosumi Shrine is a bit off the beaten path, located on Japan's northern shore in Yamaguchi Prefecture, near Kyushu. The shrine was supposedly made at the behest of a white inari fox back in 1955 and features an iconic series of 123 torii gates that wind their way from the waves crashing on the rocky cliffside up to the main shrine. At the top of the hill, the last gate features a very unique offering box which is situated on the top of the gate, requiring people to toss their coins high into the air to make an offering. If you get it in, your wish will supposedly come true. Motonosumi Shrine is unquestionably one of the most unique and scenic shrines in Japan and is well worth a visit.

Located in Kashima City in Saga Prefecture, Yutoku Inari Shrine is revered for its stunning overall aesthetics. Though relatively new in comparison to other shrines on this list (built in 1687), it quickly earned a reputation as one of Japan's top three Inari shrines. After passing over its picturesque vermillion bridge, visitors will ascend along a hillside trail dotted with torii gates before reaching the 18 meter-high main hall which overlooks the shrine grounds. Also worth seeing on the property is the traditional Japanese garden that prominently features seasonal peonies, as well as a museum that houses historical armor once worn by feudal lords.

Built shortly after the end of World War II in Kawasaki, Keihin Fushimi Inari Shrine is the newest shrine on this list, but also the closest to downtown Tokyo. While small in comparison to other entries on this list, Keihin Fushimi is incredibly unique in regards to its Inari fox statues. Coming in many different colors, there are 108 statues in total, representing the 108 earthly temptations of Buddhist teachings. The foxes also have many individualized facial expressions; a level of variety not often seen in the statues at other shrines.

Also on the property is a small statue of Mount Fuji. Though not particularly eye-catching at first glance, a closer look is certainly warranted. Rather than traditional materials, the statue is made out of lava rock collected from Mount Fuji.

Are There Any Real-Life Inari Foxes?

While the red-bib-wearing, shrine-guarding Inari foxes of legend exist only as stone representations, they were based on the very real foxes of Japan. In a time when people lived much closer to nature, the naturally inquisitive fox was a common sight for Japanese villagers - so much so that it inspired many of the Inari fox legends. Though this cohabitation mostly ended with the formation of modern cities, it has not completely disappeared.

In the mountains of Miyagi Prefecture, Zao Fox Village is a free-range park that over 100 foxes call home. Well-accustomed to the sight of humans, these friendly foxes are not shy about approaching visitors. For those wishing to experience the days of living side by side with foxes in Japan, this experience is as close as you can get to stepping back in time.

Next time you visit a shrine in Japan, keep an eye out for an Inari fox. Be sure to bring some inari sushi with you to share as well. After all, it never hurts to have friends in high places.