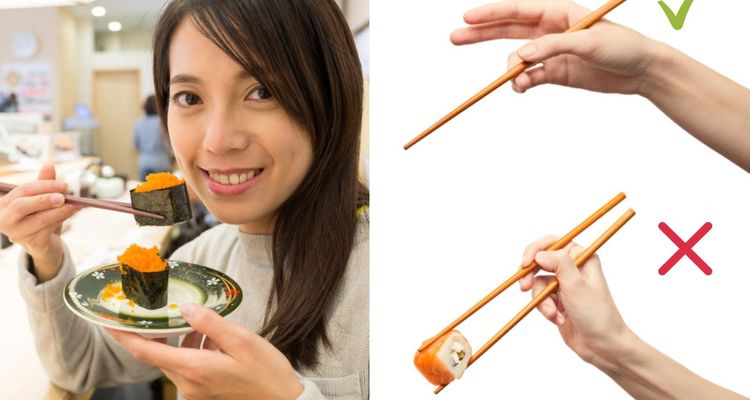 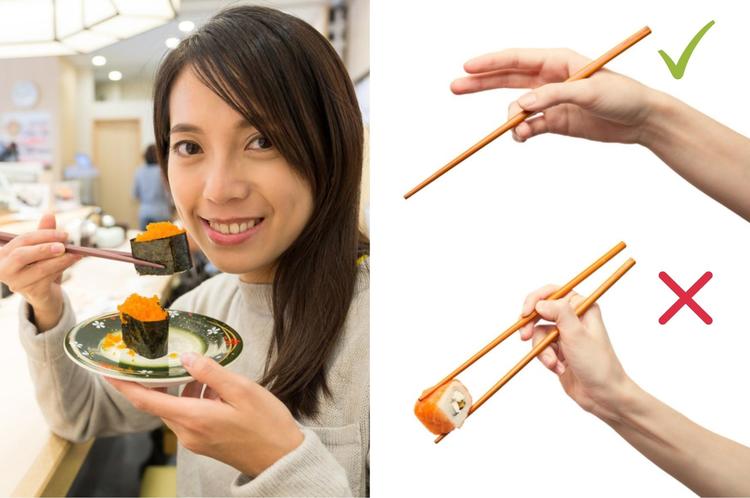 How to Properly Eat Sushi and Sashimi

Sushi and sashimi have become famous worldwide. Since you've come all the way to Japan, you probably want to eat some delicious sushi! Did you know that there is actually a proper way of eating it? Here is a short explanation of how to properly eat sushi and sashimi according to etiquette. Definitely remember these rules when you go out to eat!

Mixing the wasabi into the soy sauce is poor etiquette.

① Put an appropriate amount of wasabi on the sashimi.

② Dip it into soy sauce before eating.

Wasabi is spicy, but it's also aromatic. If you mix it in the soy sauce, the aroma will disappear. If you put an appropriate amount on top of the sashimi, you can enjoy both the sudden spiciness but also the aroma.

Dipping just the sushi topping in the soy sauce is poor etiquette.

The sushi topping is called "neta." Taking the neta off the rice to dip it in soy sauce is rude to the chef, since you are taking apart what they went to the trouble of making.

Dipping the rice in soy sauce is poor etiquette.

Sushi rice is called "shari," and is a mix of rice, vinegar, salt, and sugar. Dipping the shari into soy sauce will intensify the soy sauce flavor and will ruin the taste. Also, the rice being wet means that it will probably fall apart and make a mess.

How to Properly Eat Sushi with Chopsticks

① Place the sushi on its left side, and pick it up with your chopsticks.

If you pick up the sushi as-is, it will be difficult to turn it over so that the neta can be dipped in the soy sauce. If you place it on its left side, it's easier to dip.

② Hold the sushi so that the neta faces downwards and dip it into the soy sauce before eating.

Hold it so the neta is facing downwards and dip it in just a bit of soy sauce. If you soak the neta in soy sauce, you'll lose the delicate flavors of sushi.

How to Properly Eat Sushi Using Your Hands

① Place the sushi on its left side, and pick it up using your thumb, pointer, and middle fingers.

No matter whether you're using your hands or your chopsticks to eat sushi, you always start by putting the sushi on its left side. When using your hands, picking it up with your thumb, pointer, and finger is considered proper manners.

② Dip the neta in the soy sauce, and bring it to your mouth as-is.

Dipping the shari into soy sauce is considered poor manners.

Just like with nigirizushi, dipping the shari into soy sauce is poor etiquette. The neta won't have any soy sauce on it, and the shari will be soaked.

How to Properly Eat Gunkan

The ginger that comes with sushi is called "gari," and it's sliced thinly and pickled in sweet vinegar. It comes as a palate cleanser, but for these purposes, dip it in soy sauce until it has an appropriate amount.

② Use the soy sauce on the gari to transfer sauce onto the neta.

When you use the gari to put soy sauce on the neta, do it lightly so you don't ruin the shape of the gunkan sushi. For sushi that's wrapped in nori seaweed, like gunkan or hosomaki, as time passes the nori will get sticky and damp. While you don't have to eat it in a rush, please be careful to not let it sit.

How to Properly Eat Hosomaki

Dip it into soy sauce at an angle.

If you don't hold the hosomaki at an angle, the entirety of the shari will get soaked in soy sauce.

There are quite a lot of people that enjoy sushi and sashimi but aren't aware of the proper manners that should be observed when eating. Using proper manners will not only make the sushi more delicious, but will also allow you to impress your friends or guests. Please remember these rules and enjoy sushi in the most delicious way possible!