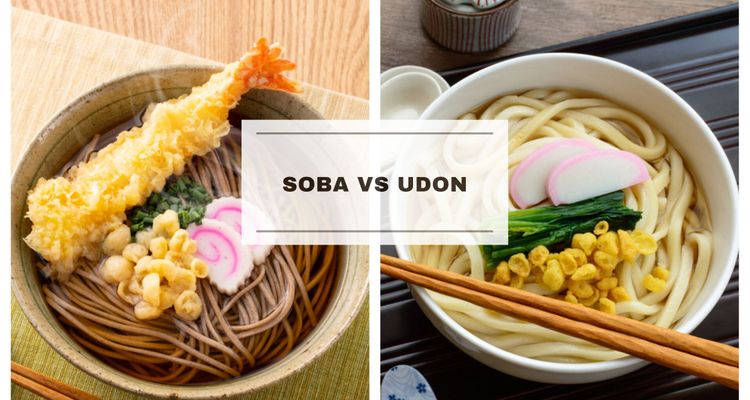 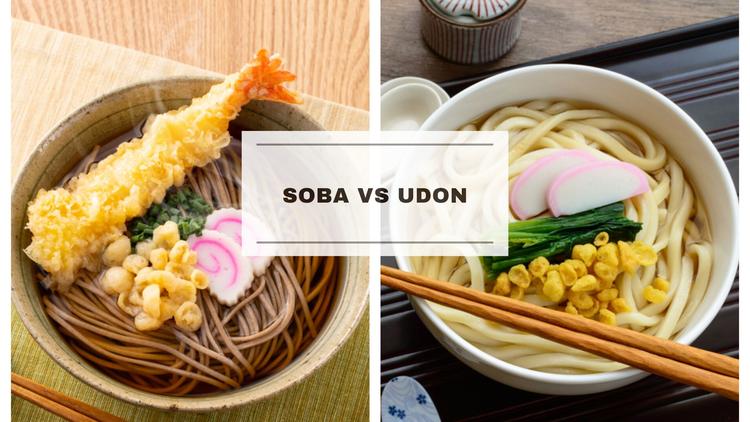 Battle of the Noodles: The Difference Between Soba and Udon

Spend any amount of time in Japan and you’ll soon find that the only things that appear as often as convenience stores are noodle shops. In the hierarchy of noodles beloved by Japanese locals, soba and udon reign supreme. However, the differences between these two are often lost on foreign visitors. Read on to find out what sets soba and udon apart and the best ways to enjoy them both for yourself.

Prized for its firm texture and distinct nutty flavor, soba’s flat noodles and rich brown color instantly distinguish it from other noodle varieties. Its signature flavor and hue are derived from the buckwheat flour that makes up the majority of soba’s simple, three ingredient recipe. As buckwheat is a naturally gluten-free food and packed with essential amino acids, soba is incredibly popular with Japan’s more health-conscious eaters. While it can be made entirely gluten-free, restaurants often include wheat flour in their recipe as it improves the texture, so people with gluten allergies should always check with the restaurant staff before digging in.

Soba is as versatile as it is delicious and can be enjoyed all throughout the year. One of the most popular ways to eat it is as cold soba, which makes for a refreshing summer meal when Japan’s oppressive summer heat curbs one’s appetite for hot foods. After cooking, the noodles are quickly chilled and served with a cold broth called tsuyu on the side for dipping. The salty, savory broth can be topped with chopped green onion or mixed with a pinch of wasabi for an extra kick.

Come wintertime, hot soba is perfect for a quick and easy comfort food. Unlike its chilled counterpart, hot soba comes with the noodles already in the soup - no dipping required. While there are many different variations of this dish, popular additions include thin sheets of fried tofu called aburaage and wild mushrooms.

Where to Try Soba

Ask any soba aficionado and they’ll tell you that Nagano is the destination for the best soba in Japan. Its nutrient-rich volcanic ash soil and high elevation make for the perfect environment for buckwheat to thrive. Their local noodles, known as Shinshu soba, are required to contain a minimum of 40% buckwheat flour, ensuring the rich, nutty taste they are known for.

Of course, not every intrepid foodie will have the time to venture out to Nagano in search of the perfect soba. Luckily, those with time constraints need not fear. There are many quality chain restaurants that serve delicious soba throughout the country.

As one of the largest soba chains, Nadai Fujisoba boasts over 110 locations throughout Japan, so no matter where you are staying, you are never far from quality soba. The restaurant features both hot and cold soba varieties to satisfy your cravings throughout the year. Be sure to check out their combination sets as well, especially the incredibly popular oyakodon set, which consists of savory breaded chicken and fried egg over a bed of rice.

There’s something special about seeing the food you are about to eat being prepared. Knowing it was made just for you in that moment somehow makes it taste so much better. At Yudetaro’s many locations, their staff is hard at work preparing fresh soba from scratch throughout the day to ensure the freshest taste and best texture possible for their noodles. The chain is also known for their incredibly flavorful tsuyu, whose recipe is said to harken back to early Edo period (1603-1868) standards for the savory soup. For a taste of soba history, make sure to stop by one of their shops.

When it comes to Japanese cuisine, the texture is just as important as the taste. In the case of udon, soba’s thicker and chewier counterpart, its texture is near and dear to the hearts of Japanese people of all ages. Although less flavorful than soba on its own, udon acts like a sponge for whatever broth it’s placed in, allowing the full flavor of the soup to shine through. Given this perfect balance of taste and texture, it’s easy to see why udon has become a staple in the Japanese diet.

Like soba, udon can be enjoyed either hot or cold. Where soba typically places emphasis on the flavor of the noodle itself, udon tends to function more as a flavor delivery vehicle. Because of this, udon broths are often more complex and rich. One popular variation features udon noodles served in thick Japanese curry. Because of their size, the sauce is able to cling to the noodles, allowing you to fully experience the spices and aromas Japanese curry is known for.

The thickness of udon noodles also helps them to hold up better to cooking methods other than boiling. While soba would easily break apart in a pan, udon is often found pan fried alongside meats and vegetables on many restaurant menus. For a more substantial and filling meal, udon is your best bet.

Where to Try Udon

When it comes to udon, Kagawa Prefecture is the undisputed king. Their signature Sanuki udon is famed for its flat edges, which allow it to pick up more broth, and of course, its extra chewy texture. While Sanuki udon can be found in shops throughout Japan, die hard foodies travel from across the country to try these legendary noodles at the source. It’s so popular in fact that the city of Kotohira offers an udon taxi tour, where knowledgeable drivers take visitors udon hopping to try some of the most popular variations.

If the lure of Sanuki udon isn’t enough to add a stop in Kagawa to your Japan travel itinerary, check out these udon restaurants that can be found all over the country instead.

Marugame Seimen is one of Japan’s most popular udon chains. Their Sanuki-style noodles are made fresh throughout the day and served in a variety of ways, from a simple udon with chilled tsuyu on the side, to more adventurous options like udon topped with pollock roe and a raw egg yolk, there is something to satisfy every appetite. In addition to their regular menu, Marugame Seimen also features seasonal udon varieties that change throughout the year.

Hanamaru Udon started off in Kagawa Prefecture, so they understand what it takes to make the best possible Sanuki udon. This noodle chain is loved by many people throughout Japan for both their incredible speed of service and budget-friendly prices. With small bowls of simple kake udon starting at 150 yen and fried tempura side dishes for around 100 yen each, you can enjoy a tasty, filling meal with just the extra coins rattling around in your pocket.

In the Battle of Soba vs. Udon, Everyone Wins

Whether you prefer the rich buckwheat flavor of soba or the delightful chewiness of udon, you’re never far from your perfect bowl of noodles in Japan. Served hot or cold and in seemingly endless varieties, it’s easy to see why soba and udon are popular mealtime options for the Japanese.