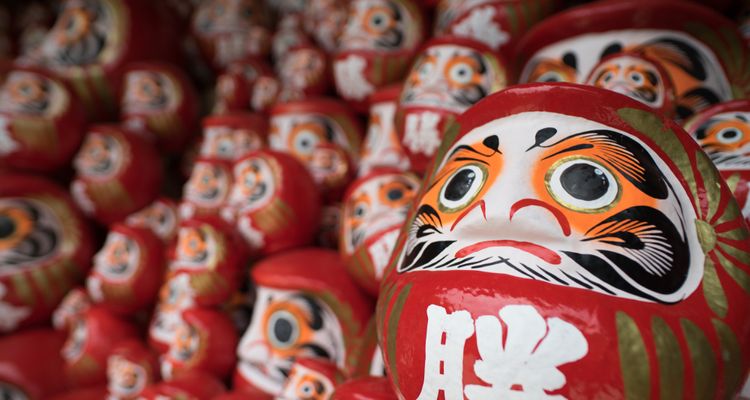 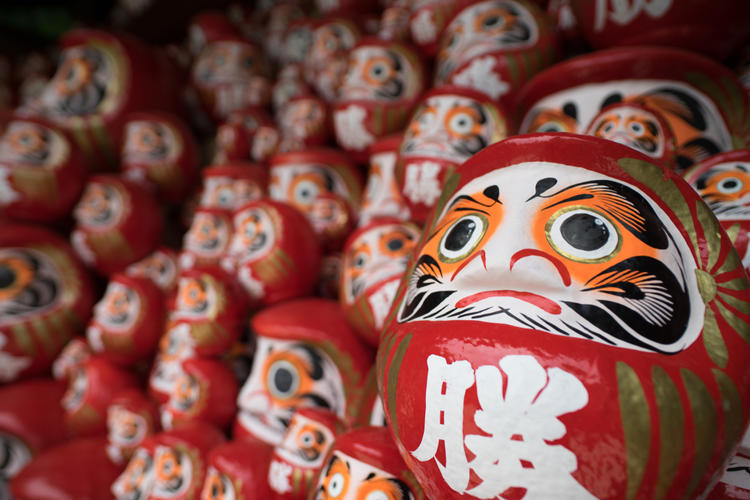 You’ve probably seen daruma on TV, in people’s homes, or lining the shelves of a temple store. Their distinctive red color and exaggerated face make them unmistakable amongst the other traditional Japanese toys and charms. With wild eyes and an unkempt beard, the Daruma dolls have long lived on dressers and tables, keeping a watchful eye on you and your goals. What exactly are they, how do people get them, and what are they for? Read on to find out everything you ever wanted to know about daruma dolls!

A Doll Based On a Real Man - The Story Behind Daruma

The daruma doll is based on Bodhidharma, a Buddhist monk who lived in the 5th or 6th century. His story is somewhat legendary, and there isn’t a lot of concrete or reliable information about him. What is known is that Bodhidharma was not from China, but moved there from somewhere to the west, potentially central Asia or India. He then spent his life as a missionary for Buddhist thought and is often said to be the first to bring the religion to China. His teachings, far after his death, eventually made their way to Japan as Zen Buddhism.

Daruma dolls are fashioned to look like the legendary Bodhidharma, taking several of his features. He was said to have large and wild eyes, along with a very thick and hairy beard. Both of these are drawn in an exaggerated fashion on Daruma dolls and give them their distinctive appearance.

The dolls' legless bodies can also be attributed to a legendary story about Bodhidharma. At some point in his life, Bodhidharma was said to have spent 9 years living in a cave and staring only at a wall, refusing to speak with anyone or do anything. This was such a long period of time that his legs atrophied from lack of use, and hence why Daruma dolls lack lower appendages. This story is also the reason that daruma dolls are a lucky symbol of determination and achievement of goals.

Origins of the Daruma Doll

While Bodhidharma lived centuries prior, he only existed as a legendary figure in Zen Buddhism in Japan and nothing else. His incarnation as a popular charm and doll is a far more recent invention.

There are several competing accounts as to the true origins of the doll in Japan, but most point to 17th century Takasaki, a city in Gunma prefecture. In one story, a priest running a local temple was tired of having to make new charms and good luck items for the local farmers every year, as at the end of the year they would bring the old charms and destroy them in a ceremony.

To solve this, he created the Daruma doll in the likeness of Bodhidharma and designed it to last far longer than the smaller charms. This is because a daruma doll lasts until the wish bestowed upon it comes true, after which it is destroyed in a ceremony.

A second story says the farmers demanded a new charm, and either made it themselves or had the priest design them one. In either case, the popularity of the Daruma doll grew steadily over the course of the century, until it became the national fixture it is today.

In a nod to its origins, Takasaki still accounts for over 80% of daruma production in Japan.

Design of the Daruma Doll and Its Symbolism

The Daruma doll is full of symbolism, and everything from its shape to its color informs either a mystical connection or imparts good luck on the owner.

The Shape of Daruma Dolls

The Daruma’s round shape and weighted bottom make it part of a lineage of Japanese toys called “okigari,” which means to “get up.” Because of the round bottom and low center of gravity, no matter how hard you push the doll it will always right itself back up. This symbolizes success and determination to succeed, and embodies the Japanese proverb “nana korobi ya oki,” which means “fall down seven times, stand up eight.”

The Color of Daruma Dolls

Traditionally, Daruma dolls are painted a bright and lively red. This harkens back to Bodhidharma and Buddhist priests, who clad themselves in robes of a similar color. Red is also a traditionally lucky color and plays into the symbolism of success and determination built into the Daruma’s shape.

More recently, newer colors have been developed as well, each with its own unique, lucky properties, as written below:

The Face of Daruma Dolls

As mentioned before, the face on the Daruma doll depicts an exaggerated image of Bodhidharma. The facial hair—messy and unkempt—is a result of his dedication to his craft as a monk and his asceticism. However, additional symbolism has also been added over the centuries.

The eyebrows, large and wild, are drawn in the likeness of a crane, an animal considered to be lucky and revered for longevity. Similarly, the mustache is drawn to call forth the image of a turtle, another animal held in Japanese mythology for its longevity.

These two symbols work in tandem with the large kanji written on the body of the daruma doll. There are a variety of different kanji you can find on daruma dolls, and each has its own specific use and good luck. These can range from wishing happiness or victory, to commemorating a place of business or the city where the daruma was bought.

Why Are the Daruma's Eyes Often Blank?

The Daruma is an interesting good luck charm. Whereas other charms are purchased and displayed, either as a reminder of their power or as a ward against misfortune, the Daruma requires active participation.

The purpose of the Daruma’s luck isn’t just general well-being, but rather, it is to help the bearer complete a goal. When you receive a Daruma, you make a goal, one that you wish to achieve in the near future. Once you decide on your goal, you color in one of the eyes. Then, until you complete your goal, the Daruma will only ever have one eye. Every time you look at it, you’ll be reminded of your purpose and your desires, and in turn, you’ll be imparted good luck to complete them.

Only once you have completed your goal do you get to color in the other eye, the Daruma purpose now fulfilled. Thus, when you see a Daruma with two eyes, you’re actually looking at someone’s past accomplishment.

Because of this, Darumas are often given as gifts to people who are aiming for something. Common goals can be getting into the high school/university of your choice, passing an exam, or accomplishing a personal feat such as weight loss or getting rid of a bad habit.

The reason why the eyes are used for wishing is due to a historical pun in Japanese. To make a prayer or a wish is 願掛け(gan-kake) in Japanese, and "gan" is also one of the ways that the word for eye 眼 (gan) can be read.

During the Edo Period, the time in history that the Daruma doll was first created, Japan often suffered outbreaks of smallpox, which led to deteriorated eye function or even blindness. People sought the protection of Daruma, and began to demand to put in the eyes themselves, thus beginning the tradition of filling in the eyes in order to make a wish.

Where Can I Buy a Daruma?

Many temples and temple shops have Daruma dolls stocked as one of the many good luck charms for sale. You can also find them very commonly at tourist shops. However, if you desire the widest selection, with the biggest variety in size, color, and design, it’s best to head to the source.

Takasaki in Gunma, as the origin of over 80% of all of Japan’s Darumas, is replete with traditional Daruma craft shops and factories. You can visit many different stores where the Darumas are hand-crafted and hand-painted. Or, if you’re into arts and crafts, you can even make your own personal Daruma!

Oftentimes temples or cities will hold year-end festivals with hundreds of Daruma dolls for sale. At these festivals, you can bring in your old Daruma dolls to be burned in a ceremony and buy a new one for the coming year.

If you're unable to come to Japan, an online store selling Japanese crafts has some incredibly beautiful daruma for sale that are made using exquisite Yuzen kimono fabric. A link to the site can be found here.

Daruma dolls are most at home in a Buddhist temple, and several throughout Japan host some very impressive collections. If you find yourself in Takasaki, Osaka, or Kyoto, these temples are a must see.

Built in 1697, Shorinzan Daruma-ji Temple is located in Takasaki, Gunma, where 80% of all daruma dolls are made.  All across the temple grounds can be found daruma of all sizes, tucked into every nook and cranny of the temple and its buildings. If you go, be sure not to miss the daruma museum, which displays a collection of dolls with unique designs not normally seen.

If you want to pick up your own daruma doll to take home with you, there are plenty of options available for sale at the temple, from large figurines to small cloth amulets that you can keep in your pocket. Also, the temple hosts a daruma doll market each year on the 6th and 7th of January, which features a dizzying array of dolls to choose from.

Located in northern Kyoto, Hourinji Temple is better known by the locals as the "Daruma-dera" (Daruma Temple) due to its large and impressive collection of Daruma dolls. While the main hall of the temple was constructed in 1718, the hall containing the Daruma collection was built in 1945 with donations from the temple's patrons. Over the years, the collection has grown to over 8,000 Daruma dolls, including the very impressive piece with a lifelike face shown in the photo above.

Be careful when making your way to the temple; there is another temple in Arashiyama, Kyoto that is also called Horinji, and that is the one that will appear on google if you make a search on Google.

Located in the mountains of northern Osaka, Katsuo-ji Temple was built in 727 during the Nara period, and you can feel its incredible history as you walk through the temple's ancient grounds. Although daruma were introduced much later in the temple's history, Katsuo-ji has been known since its inception as a place to receive luck for victory, as it has the kanji 勝 (victory) in its name. Over the years, many important figures including samurai military generals have visited the temple to pray for victory in battle and other matters.

Once daruma dolls were invented, they eventually became one of the symbols of the temple, as they symbolize victory over struggles on the way to achieving one's goal. Today, you can find the dolls crammed into every corner of this scenic temple in the mountains, making for some wonderful photo opportunities.

The Gift That Gives Back

If you know someone who is trying to accomplish a goal, get into the school of their choice, pass a difficult examination, or simply needs a bit of luck in their life, Daruma dolls make the perfect gift. Buy a blank Daruma and pass on its amazing story and luck-granting powers. Hopefully, someday you'll get to see it adorning a mantlepiece with both of its eyes colored in, with the full knowledge that you gave someone that extra bit of luck they needed to complete their wish.