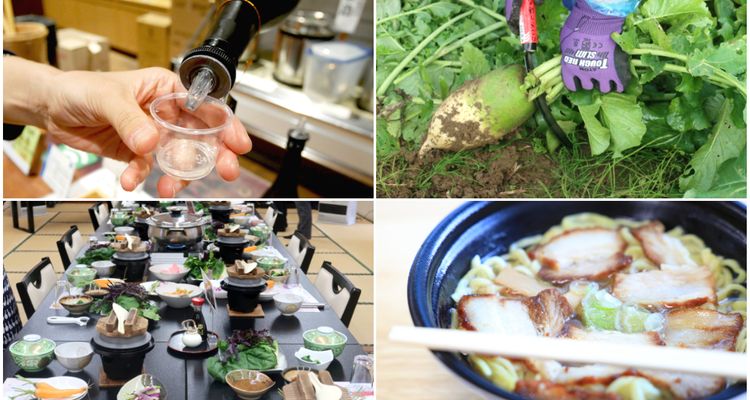 5 Best Things to Do in Kitakata, Fukushima’s Gourmet Paradise

When tourists think of foodie cities, Osaka often comes into mind. However, the prefecture of Fukushima, located in northern Japan, is also full of cities with rich food cultures. In this article, we explore the gourmet paradise of Kitakata, a small town not too far away from Aizuwakamatsu—one of Fukushima’s major cities—and introduce the best things you can do there as well as what makes it great. You'll walk away with your heart and stomach satisfied!

Kitakata City is a small town located in northern Fukushima Prefecture. It is known for its long-established sake brewing and lacquerware industries, as well as its ramen culture. In fact, it is so blessed with bounties from the land that its food culture is known throughout Japan, with flocks of tourists pouring in just to try the local cuisine.

How to Get to Kitakata From Tokyo

Best Things to Do in Kitakata

Kitakata City might be a smaller town compared to more booming areas like Tokyo and Osaka, but it actually has the most ramen restaurants per capita in Japan! This is all thanks to the local specialty, Kitakata ramen.

This ramen is entirely representative of the local region. It uses a soy sauce-based soup that's light and refreshing. Both the soup and the thick, wavy noodles use the water that runs through the region's mountains. This water is so pure that it was designated as one of the top 100 exquisite and well-conserved water sources in Japan! It’s a hearty and warming dish, perfect for Kitakata’s chilly winters. No wonder the locals adore it!

However, it’s not only the locals that have gone crazy for this ramen. It is actually considered one of Japan’s top three ramen alongside Sapporo ramen and Hakata ramen! People from all across the country make their way to Kitakata just to try it. If you have the opportunity, visit and try it the Kitakata way—for breakfast!

Kitakata City is home to approximately 4,000 kura (traditional Japanese warehouses), many of which have been converted into inns, breweries, and so on. You can see them all around the city and even out in the more rural parts. If you’re a fan of traditional Japanese architecture, it’s worth visiting Kitakata just to see all the kura for yourself.

However, before going on a kura adventure, we recommend visiting Kura no Sato. This 4,500 square-meter area is home to 10 kura that all served different purposes, from a shop to the living quarters of local officials back in the day. Inside these kura, there are exhibitions that showcase not just the history of Kitakata, but also how the kura played a major role in the city’s development. By the end of your visit, you’ll be well equipped to more thoroughly enjoy your kura adventure across the city.

The Kitakata region is optimally positioned for sake brewing. It is near the Iide mountain range which produces the exceptionally pure river water that makes the local sake taste so good. Normally, river water is easily contaminated by dust and other things in the environment, but the extremely cold climate of Kitakata in the winter keeps these contaminants away. It is this same environment that stops the spread of bacteria in the sake during the brewing process. Add in the fact that a lot of these breweries still operate out of kura, which keep the sake nice and cold during the hot summers, and the result is exceptional, award-winning local sake.

While in Kitakata, why not visit a sake brewery? You’ll get to kill two birds in one stone—try some amazing sake as well as explore a traditional Japanese warehouse! It’s pretty easy to find tours in English that you can book online, and if you can read Japanese, you can probably even make appointments to visit several in one day!

Paint Your Own Lacquerware Souvenir

Kitakata City is a part of the Aizu region, renowned for its lacquerware. In fact, Aizu lacquerware is among the top three lacquerwares in all of Japan! The city itself is a well-known production area for this craft, so you’ll find many stores selling all kinds of lacquerware to take home as gifts. But what if you could make your own?

In Kitakata, there are several places where you can join workshops to make your own lacquerware souvenir. This is the best way to truly personalize your souvenirs, so why not give it a try? They're usually quite inexpensive and only take up an hour or so of your time.

Try Your Hand at Farming

In 2006, Kitakata was the first city in Japan to announce that it would be promoting “green tourism,” wherein tourists can learn more about the local area and culture by trying out various activities at farms or fishing areas. As such, you can easily find several bookable tours online that’ll let you do just that.

We know from firsthand experience just how fun this can actually be. When we went to Kitakata, we participated in a tour that let us keep the produce that we harvested as well as use some of it to cook our own traditional Japanese meal! Afterwards, we were even treated to a lovely hot spring bath at Hotel Fujiya—owned and run by the tour host—which was perfect after a hard but satisfying time harvesting and cooking various organic vegetables such as carrots and spinach.

We were accompanied by an English-speaking guide who, together with the kind tour host, thoroughly explained every single step of both the harvesting and cooking processes. Not only did we discover vegetables that we never even knew of prior, but we expanded our Japanese cooking repertoire. Even better, we got to indulge in a feast full of foods that we had never seen or heard of before despite years of living in Japan—one of the biggest examples being vegetable shabu shabu, where you actually peel the vegetables at the table and swish the peels in hot broth to quickly cook them. We found the organic vegetables to be far fresher and crisper compared to their supermarket versions as well as incredibly delicious!

The entire tour was a gourmand’s dream and left us with a new profound appreciation for vegetables. If you’re looking to do something unique in Japan, farming in Kitakata just might be it. And if you want to do exactly what we did, you can actually contact the hotel to arrange it! We recommend going with an interpreter to fully enjoy the experience.

Explore the Gourmet City of Kitakata!

Despite its small size, Kitakata City is a paradise for foodies, with a strong food culture that captivates people from all over Japan. The next time you’re in Japan, why not take a detour from all the classic tourist destinations and pay Kitakata a visit? By the end of your time there, both your heart and stomach are sure to be full and happy.