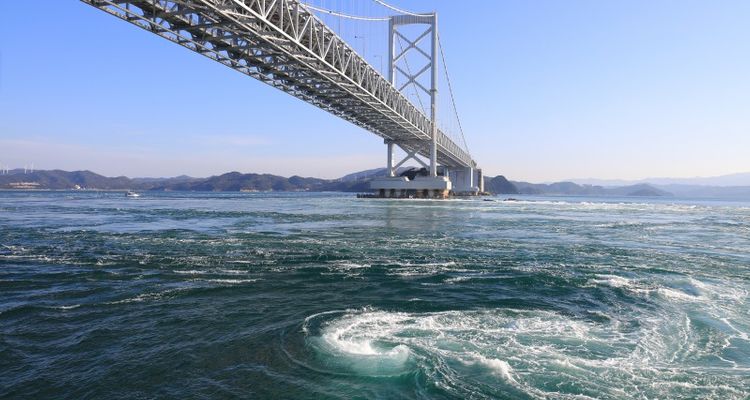 The Shikoku region, which faces the Seto Inland Sea to the north and the Pacific Ocean to the south, teems with bountiful nature, culture, and sightseeing spots. Highlights include the Naruto Whirlpools, which are amongst the largest in the world; Dogo Onsen, said to be the oldest hot spring in Japan; and Ryozenji, a deeply spiritual temple acting as the starting point for the famed Shikoku Pilgrimage. Here we’ve collected all the fundamental information you’ll need to know before visiting Shikoku, including its history, sightseeing destinations, climate, and accessibility!

The Shikoku region is located southwest of the Japanese mainland and consists of Shikoku, the smallest of the four main islands of Japan, and surrounding islets. There are four prefectures within Shikoku: Kagawa, Ehime, Tokushima, and Kochi. These four prefectures have a total combined area of 18,803 km², which is roughly a quarter of Hokkaido.

The Shikoku Mountains running through the center split Shikoku between the northern Seto Inland Sea side and the southern Pacific Ocean side. The northern area boasts a mild climate with low rainfall, while the south also has mild weather but with higher rainfall due to the effect of the Kuroshio Current.

What Prefectures Are in Shikoku?

Kagawa is a prefecture located in northeastern Shikoku. With an area of approximately 1,876 km², it is the smallest of the 47 prefectures of Japan, accounting for just 0.5% of the country. It faces the Seto Inland Sea on the east, north, and west and is connected to Okayama Prefecture on the opposite shore of the Seto Inland Sea by the Great Seto Bridge - one of the world's longest bridges. The Sanuki Mountains, a mountain range running east to west in southern Kagawa, acts as a boundary between the neighboring Tokushima Prefecture.

There are many historic sites and cultural properties in Kagawa, including Kotohira, a shrine that has long been affectionately called "Konpira-san," along with Ritsurin Garden, one of Japan's largest historical gardens, and Marugame Castle, which is famous for its stone walls said to be the highest in Japan. There is also a bustling contemporary art scene which culminates in the Setouchi Triennale, a festival held once every three years on 12 islets (including Naoshima, Teshima, and Shodoshima) and two ports in Okayama and Kagawa. Kagawa is also renowned for its mouthwatering udon noodles and abundance of udon eateries, earning it the nickname "Udon Prefecture."

Tokushima Prefecture covers eastern Shikoku and faces Wakayama Bay to the east and the Pacific Ocean to the southeast. It is a rugged prefecture with approximately 80% of the total 4,146 km² area covered by mountains. Mt. Tsurugi, the highest mountain in the prefecture, has an elevation of 1,955 m, making it the second tallest in Shikoku.

There are many places in the prefecture boasting incredible scenery, including the Naruto Whirlpools, which are amongst the largest in the world.  Also worth checking out are Oboke and Koboke, which are narrow canyons formed by the Yoshino River over a period of approximately 200 million years, along with Iya Valley, an extremely remote hideaway showcasing an unspoilt Japan. There are also many opportunities to encounter Japanese history and tradition, including Ryozenji Temple, the first of 88 pilgrimage sites in Shikoku, along with the 400-year-old Awa Odori traditional dance festival.

Ehime is a prefecture with an area of 5,676 km² consisting of northwestern Shikoku along with several small islands in the Seto Inland Sea.

The prefecture faces the Seto Inland Sea to the north and is connected with Hiroshima Prefecture via the Shimanami Kaido. The Uwa Sea, which sits west of the prefecture, is equally famous for its beautiful ria coastline. Also of note is the Shikoku Karst on the border of Kochi Prefecture, which is an expansive highland area often referred to as the "Switzerland of Japan." Kochi’s Mt. Ishizuchi, the highest mountain in western Japan known as the "roof of Shikoku," is one of Japan’s top 100 mountains.

Numerous castles dot the prefecture, including Matsuyama, Imabari, and Ozu, which are counted amongst Japan’s top 100 castles. There are also plenty of traditional townscapes, such as Dogo Onsen, said to be the oldest hot spring village in Japan, along with the castletown of Ozu and Unomachi, which once flourished as a post town on the Uwajima Kaido.

Located in the southwestern part of Shikoku, Kochi Prefecture is surrounded by Tosa Bay and the Pacific Ocean to the south, the Bungo Channel to the west, and the Shikoku Mountain Range in the north. The prefecture has an area of approximately 7,104 km², making it the largest of the four prefectures of Shikoku, of which roughly 84% is covered by thick forest.

Kochi boasts numerous scenic environments, such as the renowned Cape Muroto and Cape Ashizuri, the jaw-dropping Katsurahama Beach, and the Shimanto River which is said to be the last true clear stream in Japan. The prefecture also has an abundance of cultural properties, including the great castle of the south seas Kochi Castle, along with the Yakushido Hall at Burakuji Temple, which is a designated national treasure. There are also loads of historical sites, including landmarks connected to Sakamoto Ryoma, a warrior who played a key role in the modernization of Japan.

The History of Shikoku: A Key Transportation Hub with Ancient Ties to the Kinki Region

According to Japanese myth, Shikoku was the second of the Japanese islands to be created. It is an area that has flourished since ancient times, with the Nihon Shoki, one of Japan's oldest records written in the 8th century, stating that the emperor would visit Dogo Onsen to take baths during the 7th century.

Facing the Seto Inland Sea, Shikoku has long boasted strong ties with the Kinki and Chugoku regions, playing a lead role in the distribution of goods during the Warring States period in the late 15th-16th centuries. Legendary warlords such as Toyotomi Hideyoshi and Tokugawa Ieyasu, who helped unify Japan, sent their subordinate commanders to Shikoku to manage the distribution of goods while building castles with towers and stone walls.

Because of this, there are many castles still remaining in Shikoku, making it the perfect place to stage a castle hopping adventure!

The Climate of Shikoku: Mild Temperatures Year Round!

While the weather of Shikoku is relatively warm in spring, it can be unpredictable, with thick fog often rising from the Seto Inland Sea. Be sure to bring a jacket or light coat when visiting.

Along with grand views of the Seto Inland Sea, the famed lookout point of Mt. Shiude in Kagawa Prefecture boasts fantastic cherry blossoms, making it well worth visiting during this time.

The average spring temperature of Matsuyama City, the largest city in Shikoku, is 14.9°C and the average rainfall is 123.3 mm.

Temperatures rise in summer when the rainy season ends in early July, bringing many days of 30°C​ or more. Typhoons tend to form in the Pacific Ocean and can sometimes make landfall. Temperatures are warm enough for short sleeves all day, but it may be useful to carry an extra layer.

The average summer temperature in Matsuyama City is 26.5°C and the average rainfall is 265.8 mm.

Temperatures remain high in autumn until roughly mid-September, with the threat of typhoons lingering until October. Temperatures begin to drop in November, often leading to frost in the mountainous regions. Jackets or light coats are necessary when traveling.

Kankakei Gorge, a scenic spot on Shodoshima Island in Kagawa Prefecture, and Iya Valley in Tokushima Prefecture are Shikoku’s leading fall foliage hotspots during this time.

The average fall temperature in Matsuyama City is 19°C and the average rainfall is 102.5 mm.

Although the area facing the Seto Inland Sea stays relatively warm with little rainfall, winter brings a decent level of snowfall to Shikoku’s mountains and ski resorts. A light sweater and coat are necessary when going out.

The average winter temperature in Matsuyama City is 8.3°C and the average rainfall is 62.3 mm.

*Average temperatures and rainfall in Matsuyama City are based on the Japanese Meteorological Agency's 2020 data.

The four major cities in Shikoku are Takamatsu (Kagawa Prefecture), Tokushima (Tokushima Prefecture), Kochi (Kochi Prefecture), and Matsuyama (Ehime Prefecture). There are airports in all four prefectures, with regular flights going to and from Tokyo. There are also buses connecting Hiroshima and Ehime, Okayama and Kagawa, and Hyogo and Tokushima, along with a single train line between Okayama and Kagawa. There are no shinkansen (bullet trains) in Shikoku, so if you are taking the shinkansen from Tokyo, you must change at Hiroshima or Okayama. All things considered, airplanes are by far the most convenient way to get to Shikoku from Tokyo.

A flight from Haneda Airport to Matsuyama Airport takes about 90 minutes and fares generally range between 12,000 yen and 40,000 yen (varies by season). There are about 14 flights a day from Haneda Airport. Flights on low-cost carriers from Narita Airport starting at roughly 5,000 yen are also often available.

As we’ve seen, Shikoku is an incredibly gorgeous region offering a bounty of enjoyment, including outdoor activities, ancient wonders, and culture-rich spots, along with plenty of beautiful scenery to unwind in. We hope that this article will provide a good starting point to get your Shikoku travel itinerary off the ground!