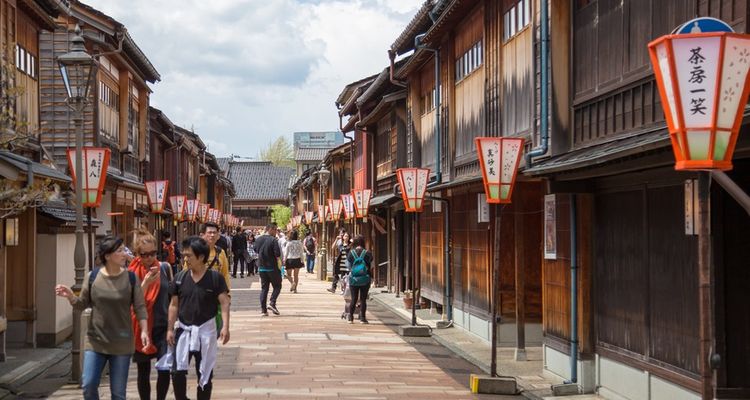 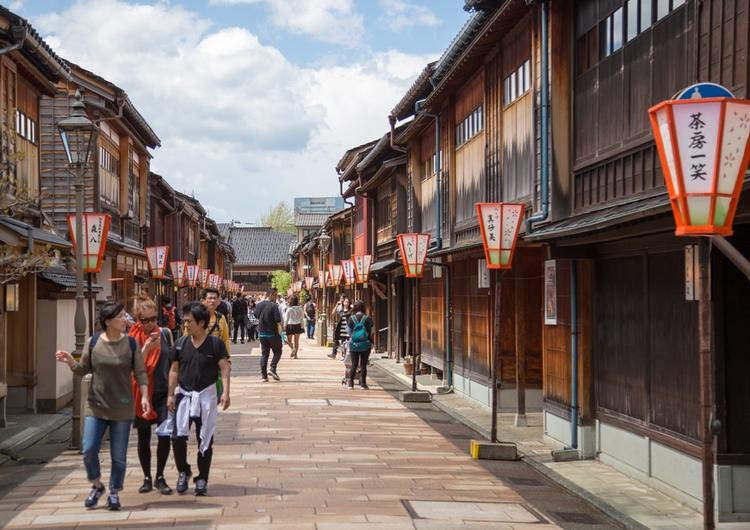 Kanazawa is a must-see destination in the center of Japan. It is sometimes referred to as “Little Kyoto” because of its charm as a historical gem. It is one of the best-preserved Edo-period cities in Japan. Kanazawa is filled with beautiful serene gardens, picturesque Edo area districts, and buzzing markets. Rich artistic traditions made the city recognized by UNESCO Creative Cities Network as a city of crafts and folk art in 2009. If you've never been to Kanazawa, we recommend you add it to your list of places to visit in Japan!

Kanazawa is located in Ishikawa prefecture on the northwest side of Honshu (Japan’s main island) and is accessible via the Hokuriku Shinkansen in 2.5 hours from Tokyo.

10 Places You Must Visit in Kanazawa

Kanazawa station is one of the main gateways into the city. This is symbolized by a huge wooden gate known as the Tsuzumimon, which stands at the east entrance gate at the JR station. It is modeled after a traditional Japanese "tsuzumi" hand drum used in traditional Noh theater to represent the industry that once flourished here.

The entire station is covered with a huge glass dome called the Motenashi Domeor the Welcome Dome. The dome acts as a huge umbrella for visitors as Kanazawa has many rainy days.

The station is filled with many interesting things. You can see some unique decorations around the station made of traditional craft, such as yuzen silk and washi paper. If you ride the "shinkansen" bullet train into the city, you can find pillar tops decorated with gold leaf on the shinkansen platforms.

2. Kenrokuen - One of Japan's Most Celebrated Traditional Gardens

This is one of the 3 most beautiful must-see Japanese Landscape Gardens in Japan. The garden is located just outside of Kanazawa Castle and was made by the Maeda family who ruled over Kanazawa for over two centuries. Kenrokuen means “garden of six attributes” and refers to the six essential things to make a perfect garden according to Chinese landscape theory.

The garden features an abundance of trees, such as plum, cherry, pine, and more. There are many flowers, stones, bridges, teahouses, water features, and other things to discover.  The park’s scenery changes from season to season. In spring, you can see pink plum and cherry blossoms, whilst in fall you can enjoy the fall colors of cherry and maple trees. In winter, you can admire "yukiduri," special ropes placed around the top of trees to protect them from heavy snow.

In the southeast corner of the park, you can find Seisonkaku Villa which is one of the most elegant samurai villas still standing in Japan. You can go inside for an extra fee to see a beautiful snapshot of Japanese history frozen in time.

Directly across from Kenrokuen is Kanazawa Castle Park which was occupied by the first feudal lord of Kanazawa, Maeda Toshiie from 1583. This castle had been burned down and rebuilt multiple times throughout history so little to nothing of the original castle still exists. Ishikawamon Gate and two storehouses, Sanjikken Nagaya and Tsurumaru, were the only structures that survived the most recent fires of 1881 and were designated as National Important Cultural Property.

The castle's grounds was used as a base for the Japanese army before being used as a university campus, until the early 1990s. Since the repossession of the castle, reconstruction has slowly been going on to restore the original buildings. The castle was opened to the public in 1996 with most of the important structures rebuilt. The most recent reconstruction project was the Nezumitamon Gate and bridge near Oyama Shrine, which were both completed in 2020.

Near Kenrokuen, you can find one of the ranked top ten most-visited art museums in the world (as of 2019). The 21st Century Museum of Contemporary Art is split into two zones, an exhibition zone and a public zone, offering a variety of art that “propose new values”.

Designed by the architectural office SANAA in 2004, the building is quite unique as it is circular in shape and looks like a UFO with a relatively transparent interior and multiple points of entry so that it feels open and easily accessible.

The most famous permanent work on display at the museum is Leandro Elrich’s Swimming Pool, which is an illusionary swimming pool that appears to be filled with water.

Kanazawa has three famous “chaya” districts, which are areas of teahouses and restaurants where geisha perform traditional songs and dances.

Higashi Chaya is the biggest district of the three. There are currently only two teahouses that are open to the public, Kaikaro and Shima. Kaikaro still functions as a geisha house today, but Shima is now primarily a museum. Both are open during daytime hours for visitors. Many of the other teahouses have been converted into cafes, restaurants, and shops that sell souvenirs, sweets, or Kanazawa's prized gold leaf products.

If you’re looking to see more preserved traditional Japanese houses, then have a wander around Kurando Terashima’s House, a samurai retainer for the Maeda family who lived from 1777 to 1837. His house is only about a 10-minute walk from Higashi Chaya.

If you are looking for somewhere to eat, then how about trying some fresh seafood at the Omicho Market?

This is one of Japan’s most energetic fresh food markets that has been in the heart of Kanazawa for more than 280 years. There are about 200 shops and stalls that sell local seafood, produce, and much more. You can even find some unique things like Kaga vegetables grown in the Hokuriku area. The market is busiest during November when crab, yellowtail, and shrimp are sold.

The Omicho Ichibakan is a refurbished building that has many popular restaurants and stores. Many restaurants here specialize in "kaisendon" or  bowls of rice topped with fresh seafood. You can get everything from Japanese snow crabs to sea urchins.

If you are looking for something interesting, go visit Myoryuji Temple which is located in the Teramachi District to the south of the city. This temple has no connection with actual ninja but is called the Ninja Temple because of its many tricks and hidden tunnels.

Originally a chapel built by Maeda Toshiie, it was moved and turned into a secret armed outpost disguised as a Temple by Maeda Toshitsune in 1643. The design and layout of the temple were part of a defensive plan against possible attackers from the Tokugawa shogunate. It is filled with traps, secret rooms, and a labyrinth of corridors and staircases. On the outside, it looks like a normal two-story building, but it’s actually as big as a four-story building with a seven-layer internal structure.

8. D.T. Suzuki Museum - A Moment of Meditation in Kanazawa

Just 10 minutes away from Kenrokuen by foot, you can find this Zen museum that was opened in 2011.

Suzuki Daisetz Teitaro (1870-1966) was a Buddhist philosopher and writer who wrote over 100 books in English about Zen Buddhism. He was born in Kanazawa and played a crucial part in introducing the concept of Japanese Zen philosophy to the west.

The D.T. Suzuki Museum is a small but serene museum for his life work. It has three wings (Entrance Wing, Exhibition Wing, and Contemplative Wing) that are connected by corridors and surrounded by three gardens (the Vestibule Garden, the Roji Garden, and the Water Mirror Garden). The architectural design of the building is clean and simple as it captures the abstract beauty of Suzuki’s teachings. Why not try some meditation and enjoy a moment of tranquility on your travels?

This is a well-preserved neighborhood of samurai houses in Kanazawa that was once the home of high to mid-ranking samurai soldiers during the Edo period. This charming area is filled with beautifully restored samurai homes, narrow lanes, and picturesque canals. There are also a few museums, shops, and restaurants around the district.

The main attraction, Nomura-ke is a beautifully restored samurai residence located at the heart of the district. Inside, you can discover what it was like to live as a high-ranked samurai and learn about what kind of artifacts they owned. It also has one of the finest inner gardens in all of Japan.

Also in the area is the Shinise Kinenkan Museum. The building was once a family-run pharmacy that was built in 1878. There are living quarters, exhibits, displays of local handicrafts, and more to see inside. The entrance fee is only 100 yen for adults and free for children, so why not have a look?

Kazuemachi is another one of the three “chaya” districts in Kanazawa and is just over the river from Higashi Chaya District. What makes this district stand out from the other two is the picturesque landscape. The main street runs along the river surrounded by tightly packed buildings and lanterns illuminate the path beautifully at night. The area is especially stunning during spring when the cherry trees bloom or in winter when the snowfalls. This district is also much quieter than Higashi Chaya District, so it’s a perfect place to take some nice photos!

There are four teahouses in this district, but only two are opened for business during the day for a fee. You can visit some ordinary cafes and restaurants in the area too. It’s also the place to go for some high-end sushi or to see some geisha training centers. The historical rows of houses have also been designated as Japan’s cultural assets since 2008.

Add Kanazawa to Your List of Places to Visit in Japan

What do you think about our list? Kanazawa has a good mix of both modern and traditional attractions for everyone. If you want to explore the beautiful sights this city has to offer, see some timeless architecture, or even just eat some delicious sushi in one of Japan’s most energetic fresh food markets, then you should start planning your next trip there!