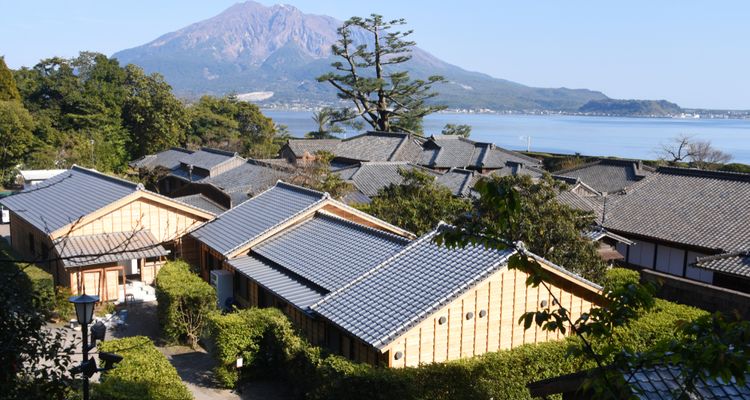 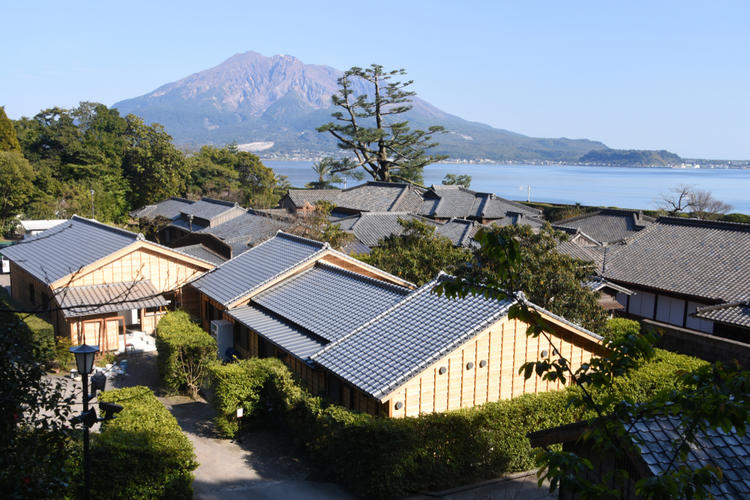 Kagoshima, the southernmost prefecture on Kyushu (the southernmost of Japan’s four main islands) is rich in history and culture. Once one of the most prominent samurai domains, the tranquil prefecture now stands as a quiet monument to the history of Japan’s feudalism and westernization. This article will introduce five recommended areas where you can delve into the traditional, historic atmosphere that Kagoshima is so well-known for!

Kagoshima was the home of the Satsuma Domain, a feudal domain ruled by the Shimadzu clan for several centuries until the Meiji Restoration in 1868. The area was integral when it came to trade and relations with other domains such as the Ryukyu Kingdom (modern-day Okinawa Prefecture), and it was an extremely wealthy and prosperous region not just in Kyushu, but in the entire country. Its proactive trade and its exemption from certain rules that were implemented to keep domains from gaining too much power made it one of the most powerful domains in Japan, although the power dynamic changed with the Meiji Restoration.

The samurai class was abolished with the Satsuma Rebellion (1877), during which groups of samurai revolted across the country in favor of invading Korea and restoring samurai privileges. A particular group in Kagoshima, former disciples of the famed samurai Saigo Takamori, paired with the prefectural governor to push their own agenda and caused enough havoc that they caught the particular attention of the newly-formed national government. They were eventually forced to retreat back to Kagoshima and were defeated there by the imperial army.

The area was also noted for its contribution to the modernization of Japan, with the establishment of Shuseikan, a group of buildings that included a cannon and warship factory, to counteract the impending threats of forceful invasion from Western countries such as the United States and the United Kingdom.

During the Edo period (1603 - 1868), “outer towns” (called “fumoto” in Japanese) were set up right outside of the Satsuma domain to host samurai retainers in the area. This particular fumoto features houses that have been restored, but the stonewalls and overall landscape remain almost the same as they were 400 years ago.

Just walking along the rock wall-lined paths while looking at the Japanese-style roofs and architecture is certainly a mesmerizing experience, but for those who are even more curious about the life of the samurai, there are two houses open for public viewing! While most of the buildings are now local residences, Takezoe-tei and Saisho-tei are two samurai residences that look frozen in time and will allow you insight into the life of the samurai at the time. Be sure to get a good look at all the nooks and crannies, and don't miss the escape tunnel built under the hearth at Saisho-tei for use in the event of an attack. The gardens are also beautifully maintained, enhancing the traditional atmosphere of the houses.

The Izumi Fumoto History Museum is the perfect place to delve into the history of the area and samurai, with exhibits showcasing authentic swords, armor, and scrolls. For a truly unique experience, hop onto one of the ox-drawn carriages for a leisurely tour around the area! Kimono rentals are available as well for the perfect snapshots.

Chiran is home to over 500 Edo period (1603 - 1868) samurai residences, earning it the nickname “Little Kyoto of Satsuma.” Walking through the district offers breathtaking views of beautifully landscaped greenery lining the paths and contrasting with the wonderfully preserved samurai houses. The area has even been designated as a Preservation District for Groups of Traditional Buildings by the Japanese government.

The infrastructure is the same as it would have been when the samurai were walking along the streets, with most design decisions being made considering battle tactics. For example, the way the streets and hedges were placed enabled samurai to attack potential invaders without being spotted.

While the residences cannot be entered here as most of them are privately-owned, the main focus of this district is the beautifully manicured gardens, designed by gardeners brought over from Kyoto around the 18th century. There are seven main gardens here, and each one exhibits the traditional aesthetics of Japanese gardens, along with elements from Chinese and Ryukyu gardens. They feature carefully pruned trees, shrubs, and rocks contrasting the light-colored sand.

Sengan-en is a stunning garden constructed in 1658 by the 19th-generation head of the Shimadzu clanーthe same clan which is credited with starting the modernization of not only Kagoshima, but the country of Japan. The 50,000m² plot is home to a fabulous mansion, a large Tin Gate once used by the leaders of the Satsuma clan, shrines, a bamboo grove, and more.

Here you can tour the mansion where generations of the Shimadzu clan resided, the wood for which was sourced from the now-famous Yakushima Island off the southern coast of Kagoshima. The interior is a masterful mix of Japanese, Western, and Chinese elements, influenced by the domain’s hold on international trade throughout the years. If you look carefully, you can also see some ingenious design details, such as intricately carved and painted figures used to cover nails in the wooden beams.

Sengan-en was even used as a filming location for the Japanese period drama “Segodon,” based on the life of Saigo Takamori, attesting to its natural beauty and Japanese aesthetics. The garden has a beautiful backdrop with views of Kinko Bay and Sakurajima—an active volcano—in the distance, and uses these as massive versions of elements seen in traditional Japanese gardens (such as Kinko Bay replacing a pond). You can easily spend half a day leisurely exploring all the beautiful features of the garden and surrounding area.

If you’re looking for a little break from the thatched-roof houses and manicured gardens, take a little trip out to this tiny, off-the-beaten-path hot spring area! Nestled in the mountains of Western Kagoshima, Sendai Taki Onsen is a hot spring area with scenery that is peak retro Japan. Not only do the exteriors of the buildings exude a charming quaintness that allows visitors to understand the history of the area, the interiors of the hot springs also have a vintage vibe from the years of service to generations of hot spring-goers.

The history of this hot spring area stretches back 800 years, and it’s said that Saigo Takamori, a famous samurai from Kagoshima who lived during the 19th century, often stopped by here during his hunting trips. With a townscape that appears unchanged from the mid-20th century, Sendai Taki Onsen is the perfect place to unwind while soaking in hot springs, eating delicious local food, and buying charming souvenirs!

The Iriki-Fumoto Samurai Residences offer another fascinating glimpse into the life of the samurai. Surrounded by a river with rice paddies spreading out in the distance, the view looks like something straight out of a period movie! The moat and fort heightened the area’s defense, and one of the unique points of this area is the walls made with smooth, rounded rocks. The district was once centered around Kiyoshiki Castle, the location of which is now recorded with a wooden marker.

You cannot visit this historic cluster of buildings without paying a visit to the Masuda Samurai Residence, built in 1873 and home to a stone warehouse and washroom that dates back to 1918. The Samurai Gate of the Iriki-in Family is also the only thatched gate to a samurai residence remaining in Kagoshima. When you're looking to take a break from exploring the historic buildings and streets, you can relax at one of the several cafes housed in renovated traditional residences!

Travel Back in Time at These Kagoshima Locations

As it was once one of the most prominent domains in the country, Kagoshima has held onto its prestigious samurai past and allows visitors to look back in time. Its location in the far south of Japan also means that it boasts a comfortable, mild climate and is relatively untraveled compared to other major tourist destinations. For a quiet trip into Japan’s past, be sure to stop at one of the many beautiful, tranquil locations scattered across the stunning prefecture!

Kagoshima isn't the only prefecture in Kyushu with places that take you back in time! Be sure to explore the rest of Kyushu to see all the charming places that are testaments to the natural and historic beauty of Japan!