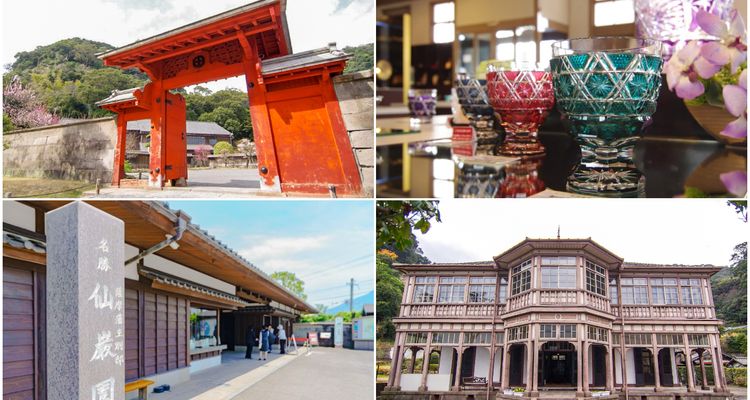 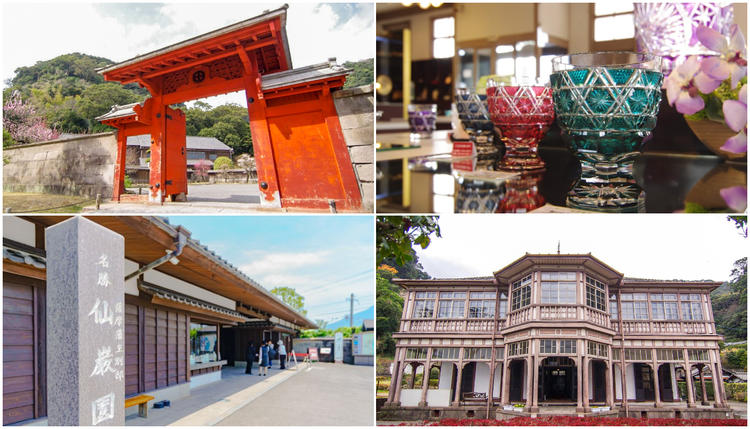 Situated beside Kagoshima's Kinko Bay and overlooking the volcanic island Sakurajima, Sengan-en Garden was the estate of the Shimadzu clan who ruled over the Satsuma Domain (part of modern-day Kagoshima Prefecture). Right next to it is the Shoko Shuseikan Museum, the first-ever machinery factory in Japan. These two buildings have stood firm against the tides of change and witnessed Kagoshima's transformation into the cradle of Japan's industrial revolution. This article introduces these two spots and how they have helped shape Japan's history.

* Although we normally follow the modern Hepburn system for romanizing Japanese words and names, we have decided to respect the Shimadzu family's decision to continue using the older Hepburn system, and thus will be referring to them as "Shimadzu" instead of "Shimazu" throughout the article. For more details, please read here.

Sengan-en Garden and the Shoko Shuseikan Museum are iconic landmarks of Kagoshima, and can be reached by the following bus routes running from the Kagoshima city center to the Sengan-en Mae bus stop.

Established towards the end of the Edo period (1603 - 1868), Shoko Shuseikan Museum was a Western industrial complex located next to Sengan-en Garden. It was built by Nariakira Shimadzu, the head of the Satsuma Domain at the time, in response to the rising threat from foreign powers. The factory now serves as a museum to tell the history of the Satsuma Domain and Japan's industrial reform.

The Shimadzu clan was an ancient noble family dating back to the Kamakura period (1185 - 1333). As rulers of the southernmost domain in Japan, they were under less influence of the current shogunate (military dictatorship) at the time, and more aware of overseas development. Long before Nariakira Shimadzu's Shuseikan came to be, his great-grandfather Shigehide was already known for his love of Western culture, so much so that he was nicknamed the "Holland-holic*" daimyo (feudal lord). Nariakira was clearly inspired by Shigehide's international perspective.

* "Holland" refers to the Netherlands.

When it was Nariakira Shimadzu's turn to rule, he made his great-grandfather's fascination a reality by opening the Shuseikan along with starting several other modernization projects, hoping to boost Japan's productivity and self-sufficiency to match the level of other countries. Although only the machinery factory survives today, back then, it used to be an entire industrial area manufacturing everything from metals, weapons, and ships to textile products, household items, and handicrafts.

The picture below shows the remains of a furnace built in 1852 at the Shuseikan to cast cannons from iron. It is located next to the Sengan-en Garden. If you can't visit, you can still download an app on your phone to see its original form in 3D, restored by AR technology!

Satsuma kiriko, a type of colored glass craft which Kagoshima is famous for today, is a product that actually originated from the Shuseikan Project! It is conveniently on display and available for sale at the neighboring Shimadzu Satsuma Kiriko Glassworks. The colorful glassware are decorated with delicate patterns made possible through extraordinary cutting techniques. They were once exported for foreign trade, offered to other daimyo as gifts, and even served as dowry when Atsuhime—the official wife of Iesada Tokugawa, the 13th Tokugawa shogun of Japan—got married. They make great souvenirs, but be warned: these exquisite handicrafts carry a hefty price tag!

On a side note, both the Shimadzu Satsuma Kiriko Glassworks building and the Starbucks next door are relocated cultural properties from the Meiji period (1868 - 1912). Do take some time to admire the pair of quasi-Western architecture, featuring Western elevations and Japanese black roof tiles!

The Ijinkan is just a short walk away from the Shoko Shuseikan Museum. It was designed by the English and built by the Japanese as the residence for the English engineers who worked at the local Western-style spinning mill. This beautiful wooden structure, together with the machinery factory, the ruins of the furnace, and other "Sites of Japan's Meiji Industrial Revolution" all over the country, were jointly registered in the UNESCO World Heritage List in 2015.

The Western-style spinning mill was set up after Nariakira Shimadzu's death. The Satsuma Domain smuggled nineteen students, led by a young man named Tomoatsu Godai, to study in Britain without gaining permission from the shogunate, and they later brought back a group of craftsmen and machines to open the spinning mill. Given the general hostility against foreigners then and the fact that the Satsuma Domain once engaged in a battle with Britain, it is said that the English engineers were heavily guarded by samurai at all times - restroom break included!

Tsurumine Shrine sits between Shoko Shuseikan Museum and the Sengan-en Garden, enshrining the past Shimadzu clan leaders. The main hall is surrounded by tall trees, making visitors feel as if they are stumbling into a secluded forest, when they are in fact just a few steps from the heart of Japan's industrial revolution. Such is the magic of Japanese shrines.

Japanese stroll gardens are often designed in a way that "borrows" the scenery beyond the premises and makes it their own. Sengan-en stands out from other stroll gardens because with proximity to Kinko Bay, it has the vast ocean and the magnificent Sakurajima as its backdrop. Moreover, the garden is full of southern Japanese plants like sago palms, giving it a unique vibe that cannot be found in other renowned gardens.

Sengan-en Garden has two main gates. The one closer to the palace is a vermilion gate forged with tin excavated in the Satsuma Domain. It used to be the front gate, but nowadays tourists are usually guided to the quaint wooden gate facing Kinko Bay first, which was added in the Meiji period.

The State Guest House became a residence for distinguished overseas guests during the Meiji period, but before that, it was a palace and the Shimadzu clan's home. The interior has been largely kept the same. The living room has the best view of the entire place - the entire garden can be seen, and Sakurajima is also visible. Indeed, it was the favorite room of Tadayoshi Shimadzu, the last head of the Satsuma Domain. He liked to review official documents and have lunch there, often staying all day.

The picture above shows the view from the living room.

The Bogakuro Pavilion in the garden was a gift from the king of the Ryukyu Kingdom (modern-day Okinawa Prefecture) to the head of the Satsuma Domain. This was where Kaishu Katsu, a Japanese statesman and naval engineer, had long discussions with Nariakira Shimadzu when the former visited the domain during his trip across the country to advocate for the establishment of the Japanese navy. In his book "Hikawa Seiwa," Kaishu recalled Nariakira telling him that "it takes time to cultivate talents, so you must be patient," and "you need to wait for ten years to see the fruits of your endeavor."

Nariakira Shimadzu had only been the head of the Satsuma Domain for eight years before he died of sickness. As if to prove his words, his loyal attendant Takamori Saigo rose to become a leading figure in the Meiji Restoration following his death, and the complete westernization of Japan after the reform served as a testimony to his foresight in building the Shuseikan.

There is a small shrine behind the palace called "Cat Shrine," and it is apparently related to Yoshihiro Shimadzu, a mighty general during the Sengoku Period (1467 - 1615).

Hideyoshi Toyotomi, a feudal lord that eventually became one of the most powerful men in Japan, once ordered Yoshihiro Shimadzu to wage war against Korea, to which he brought with him seven cats so that he could tell the time by looking at the changes in their pupils. Five perished during the process, and the remaining two, "Yasu" and "Mike," returned with him to the Satsuma Domain to live out their lives. They are worshipped as gods at the Cat Shrine, which Yoshihiro built for them.

You can also find waterworks facilities at various spots around the Sengan-en Garden. Not only was there a dedicated water supply system, but the garden's lightings were powered by hydroelectric energy during the Meiji Period, which was the first instance of private electricity generation in Japan!

Sengan-en Garden and Shoko Shuseikan Museum are more than just beautiful scenery and grand architecture; they are also a representation of the fierce desire for knowledge and experimental spirit that the Japanese held during the Meiji Restoration. Though more than a century has passed, their passion transcends time and reaches those who set foot in Kagoshima, the cradle for change.

Kagoshima Prefecture is just one out of the seven different prefectures that make up Kyushu, arguably Japan's most scenic and historic region. If the Sengan-en Garden and Shoko Shuseikan Museum are right up your alley, we think you'll love what the rest of Kyushu has to offer. Check out the official Kyushu tourism website for more information on what's out there in the region.