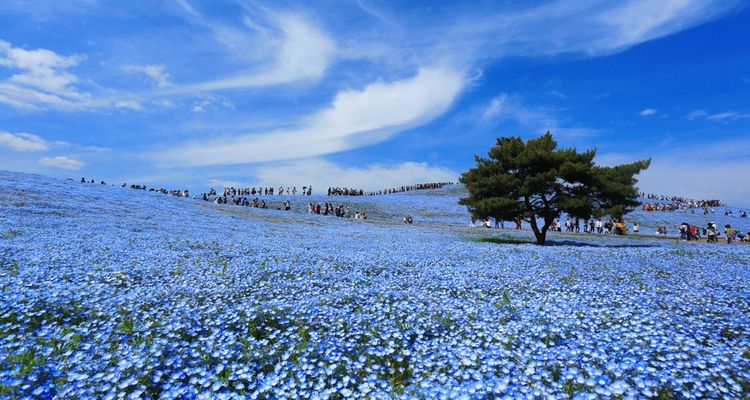 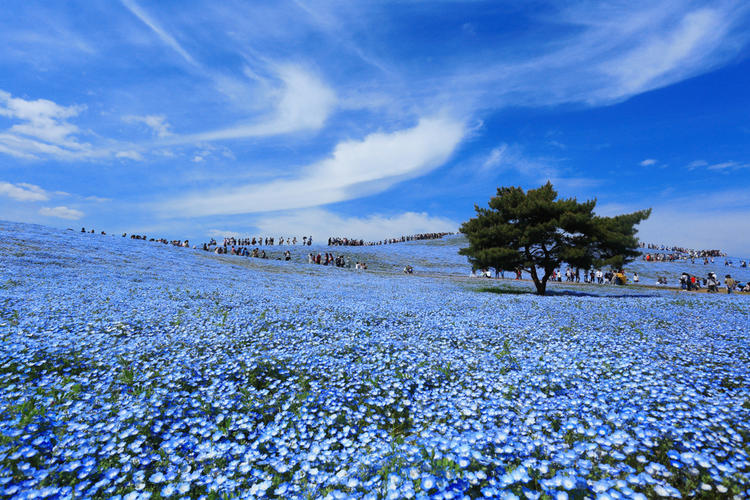 Top 13 Flower-Viewing Spots in Japan: Where and When to Go See Stunning Flowers!

Japan has a huge variety of flowers that bloom in each of the seasons throughout the year. Reveling in the beauty of the flowers is such a huge part of Japanese culture that there's even a special word for it - hanami. It's a deeply-ingrained custom enjoyed and adored by the Japanese people since long ago. Head out to a flower field during your travels to experience both Japanese culture and nature all in one! This article will introduce the top flower viewing spots across Japan, so feel free to use this as a guide when you start planning your trip!

Hitsujiyama Park gives you a splendid full view of the Chichibu area. In the southern side of this park, you can find the Shibazakura no Oka (Moss Pink Hill), one of the most famous moss pink spots in the Kanto region. From mid-April to early May, an impressive flower carpet of over 400,000 moss pink flowers of 9 different varieties colorfully bloom across a vast area of 17,600 sq.m. All sorts of events are held during the flower blooming period, such as a local specialty goods market that's held right by Shibazakura no Oka.

This gorgeous garden full of flowers and luscious greenery stretch out at the foot of Mt. Akagi. You can view beautiful flowers all throughout the year in the garden's extensive 18.4 hectare space. The flowers in Flatopia Grand Flower Bed, which is situated in the center of the park, are replanted 4 times a year. In spring, over 200,000 tulips ranging across 70 varieties blooms here. From the 18m park tower, you'll get a stunning view of the park, which will look like a painting drawn with flowers. There are many other sights to see as well, such as the rose garden, dahlia garden, Japanese garden, and the English garden!

Hitachi Seaside Park is blessed with an abundance of flowers and greenery. The approximately 200 hectare park is split up into 7 areas in which you can bask in nature with a variety of different activities, including cycling and holding a barbecue. Many flowers bloom from season to season throughout the year: daffodils and tulips in spring; roses, zinnia, and sunflowers in summer; and kochia and cosmos in the fall. The 4,500,000 blue nemophila flowers sprawling across an entire hill is especially a sight to behold, creating a dreamy scene well-known as a symbol for ringing in the spring.

This flower park is known for its large 150-year-old wisteria and seasonal flowers in the "Garden of Illuminated Flowers." The biggest highlights at this park are in spring, where you can revel in over 350 wisteria in bloom, including the great wisteria with a 1,000 sq.m. wide trellis, the 80m-long white wisteria tunnel, and the laburnum tunnel. The park is lit up at night, so you can enjoy two completely different views! Its magical scenery even landed it a spot in CNN's list of top 10 dream destinations!

Huis Ten Bosch is the largest amusement park in Japan, and it was designed based on the 17th century townscape of the Netherlands. A 6km-long canal runs through its extensive grounds, and you can enjoy the flowers that bloom throughout the seasons and the castle and trees beautifully lit by the setting sun. In spring, the largest rose festival in all of Asia is held here. You'll be enveloped in the sweet fragrance of roses as you take in the gorgeous scenery of the grand rose garden, the rose canal, and the rose palace.

Kuju Flower Park stretches out in the magnificent Kuju Highlands located in the center of Kyushu. From spring to fall, roughly 5 million flowers of 500 varieties bloom in this park. It's split up into different sections like the forest area, flower garden area, and wildflower area. The vibrant spring flower field area, which features 11 types of spring flowers all bunched together, displays a gorgeous patchwork-like scenery made up of romantic, brilliantly colored flowers.

For about a month from the end of June, the Sugiyama road in Michinoku Hydrangea Park is decorated with the vibrantly colored hydrangeas. Approximately 40,000 hydrangeas of 400 varieties, including early blooming mountain hydrangeas and late blooming hydrangeas that were selectively bred in Europe and the Americas, bloom along both sides of the 2km promenade. You'll surely feel invigorated after a stroll through this pleasantly cool forest.

The city of Furano in Hokkaido is famous for its lavender fields. and Farm Tomita boasts the longest history and is the largest in scale out of all of them! In addition to lavender, there are also over 80 types flowers such as scarlet sage, marigold, and ageratum that bloom here. The best season to visit is around mid to late July, when the sloped fields are painted into a brilliant rainbow of 7 colors comprised of purple lavenders, white baby's breath, red poppies, and so on.

Over 2 million sunflowers of various types grow on this east-facing slope. The blooming period lasts each year from late July to late August, but the best time to come is in early August, when the entire field is covered in the bright yellow sunflowers. The mornings of sunny days are especially impressive as the sunlight hits the sunflowers and makes them shine even more radiantly. You'll definitely feel rejuvenated after looking out at this gorgeous field of sunflowers!

Grinpa is a family-friendly amusement park located in the vast fields of the second stage of the World Heritage Site, Mt. Fuji. Every year from mid-July to early October, the Heavenly Dahlia Festival is held here. The dahlia field is situated at the base of Mt. Fuji, making it an excellent place to take photos! Besides the 30,000 dahlias, if you visit in the fall, you can also enjoy a stunning view of the 160,000 cosmos and 300,000 marigolds.

Within the plains of Kinchakuda, which are formed around the Koma River, you'll be able to find 5 million red spider lilies growing en masse. This is the largest red spider lily field in Japan, and you can enjoy a view of a sprawling red carpet filling the entirety of this expanse of land. During the blooming season Hidaka City also holds the Red Spider Lily Festival, where numerous food stalls line the area selling local fare; just during this period alone, close to 300,000 visitors make their way over to this city!

You know it's officially fall when the Cosmos Festival rolls around in Showa Memorial Park! A total of 5.5 million cosmos of diverse varieties bloom in this large park, which has an area over 20,000 sq.m. There are 3 flower fields in this park, with different species of cosmos planted in each area. The blooming season is from mid-September to late October, and on the weekends during this period, the park offers a variety of activities, including a flower picking event!

Atami is well-known for its hot springs, and the park here is famous for having the earliest blooming plum blossoms. In addition to 59 types of old trees that are over 100 years in age, you can enjoy viewing the 472 plum blossoms here during the long blooming period between late November to early March. The foot baths and souvenir shops in the garden open up during the Plum Blossom Festival, and you can even watch a rakugo (traditional Japanese art of storytelling) or geisha performance!

The brilliant colors and sweet fragrance of flowers will surely brighten up your day! Since the periods in which flowers bloom are limited, it's even more breathtaking if you're able to catch the flowers in full bloom. Don't miss out on witnessing a stunning scenery that's only visible for a short time!