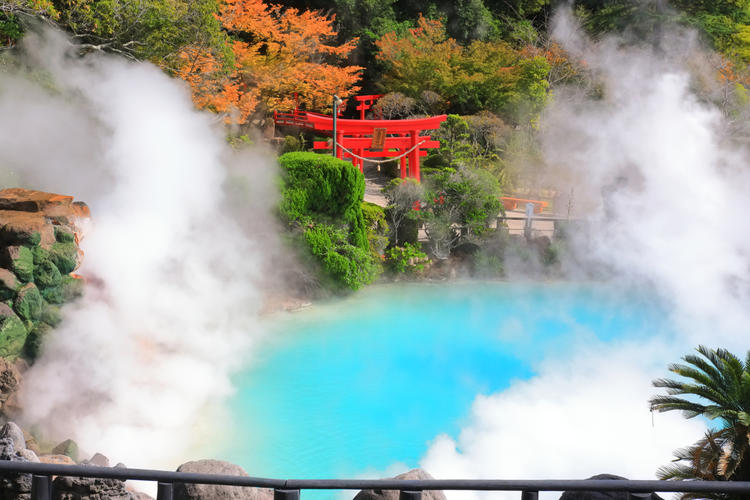 Welcome to Hell! Introducing the Hellish Hot Springs of Beppu Onsen in Kyushu

Throw away all your preconceptions of what "hell" is! In Japan, hell (“jigoku”) can either refer to the "land below" or to hot springs that are so hot, all you can really do is stare at them from a distance. Many of these "hells'' are located in Beppu in the Kyushu region. To discover what these hells are, read below and prepare for a sweaty time!

Located in Oita Prefecture in the northern part of Kyushu, Beppu Onsen is one of the most famous hot spring areas in all of Japan. This is because it produces the greatest amount of hot spring water in the country, and the variety of onsen to be found in the region can leave one dizzy. The hot spring water is also thought to speed recovery and beautify the skin.

In this article, we’ll be taking a look at one of Beppu Onsen’s most popular attractions: its seven “hells.” Most of them are found in the Kannawa district of Beppu Onsen, with two that are found in the Shibaseki district. These two districts are not too far from each other, so it is common to see all the hells in one visit. More on that later; for now, introducing the seven great hells of Beppu Onsen!

This hell gets its name from its cobalt blue waters, which are a result of iron sulfate in the water melting from the high temperature. It is not only the biggest out of the seven, but also the most famous because of its heavenly appearance.

At 98°C / 208.4°F, the steam that constantly rises from this hell makes the area warm enough to support all kinds of tropical vegetation. As such, you can actually find a wide variety of flora in the area, including tropical water lilies in a nearby pond that are so large and strong that they can hold up to 20 kg of weight! Most of these plants and flowers bloom between May to November, and are a lovely sight to see if you get the chance.

Though this pond may be considered hell to the likes of you and us, it is heaven to the 80 or so crocodiles that call it home. In 1923, Beppu Onsen decided to take advantage of the heat and steam that this 99.1°C / 210.38°F pond emitted by turning the whole area into a crocodile reserve. Doesn’t its name make more sense now?

While gazing at the crocodiles brings plenty of fun—especially if you can catch a glimpse of baby crocodiles!—Oniyama Jigoku offers plenty of educational activities such as watching crocodile feedings and learning about these fascinating “monsters” through displays such as a stuffed taxidermy of a giant crocodile and a well-preserved skeleton of a gharial, a sadly extinct species of crocodile.

This gorgeous hell shines a milky bluish white, a color formed by the decrease in temperature and pressure when the originally transparent water is pushed out of the earth and touches the pond’s surface. Though it easily entrances one’s eyes, you should never make the mistake of thinking that it’s a pond from heaven, as just like the Umi Jigoku, Shiraike Jigoku is incredibly hot at a burning 95°C / 203°F.

This hell offers two main attractions besides the pond itself: a serene traditional Japanese garden, which the pond is located within, and a tropical fish aquarium! At the aquarium, you can observe many unique species of marine life, including the pirarucu, one of the largest freshwater fish in the world that’s originally native to the Amazon River.

This hell has both a unique name and appearance, doesn’t it? The bubbles that pop out of the hell’s mud bubbles look like the shaven heads of monks, thus its distinctive name. Oniishibozu Jigoku also happens to be one of the oldest hells of them all, with a history that dates back to 733, having appeared in the Bungo no Kuni Fudoki, which is a compilation of ancient reports on the Bungo Province, a territory that Beppu Onsen was once a part of.

A footbath with much clearer water is available in the area, but if you have some time to spare, we recommend frequenting the local hot spring facility instead! There are five different baths available, including hinoki cypress baths and open-air baths, which are not just family-friendly but also wheelchair accessible as well.

At 98°C / 208.4°F, it’s understandable if you were to think that this hell got its name because someone was literally cooked in it, but the reality is a bit different. Kamado Jigoku supposedly got its name because its steam was used to cook up the food offerings to the guardian deity of the nearby Kamado Hachimangu Shrine. The “hell” is purely due to its high temperature.

One of the main attractions at this hell is a show of sorts, where the presenter will take a cigarette and blow smoke into one of the hell’s mud pools to produce a large cloud of steam from it. The steam billows out much like how it would waft out from a cooking pot! You can also drink hot spring water here. The water is cooled down to 80°C / 176°F to make it a lot safer to drink, but it can still be really hot, so please be careful not to burn yourself. Lastly, there’s an area where you can steam your hands and feet, which is said to be great for blood circulation as well as smoothing out the skin.

This 1,300-year-old mud pond happens to be Japan’s oldest natural hell. As you might guess from the picture, it gets its name from its deep red color, which is the result of the iron oxide and magnesium oxide in the mud reacting to the high temperature and pressure underground. At 78°C / 172.4°F, it is actually the coolest hell out of the bunch - a striking contrast to its appearance, which might be the most hellish of them all.

Apart from indulging in the area’s footbath, you can purchase a salve made with clay taken straight from the pond. This ointment is said to be very good for the skin, especially if you have any skin diseases.

This is the hottest hell out of the bunch at a whopping 105°C / 221°F above ground and a crazy 150°C / 302°F underground. It takes the form of a geyser that erupts with steam and hot water every half hour for about 6-10 minutes. It’s such a rare sight that the city of Beppu has designated it as a natural monument! There’s a timetable on site that you can check to see when the geyser will erupt next.

Though the hell itself is quite fierce, some of its other attractions are comparatively mild. From mid-April, the surroundings become flower fields of azaleas, and there’s also a gelato shop with offerings that make use of fruits from a local farm nearby. The contrast between the fierce geyser and its peaceful surroundings is fascinating and definitely worth a look.

How to See Beppu’s 7 Great Hells

As previously mentioned, since all the hells aren’t too far away from each other, it is common to see all of them in one visit. This is called the “Jigoku Meguri,” or “Tour of the Hells” in English, and is what we recommend those who wish to visit to do. Here’s what you need to know to successfully complete your Jigoku Meguri:

You can view the hells from 8:00 am until 5:00 pm every day of the week, including public holidays.

If you plan to do the Jigoku Meguri tour, you can get a discounted pass to all seven hells. This pass expires two days after purchase and only grants you one visit to each hell.

If you won’t be visiting all of the hells, you can pay an entrance fee of 400 yen for each individual hell.

Starting from Umi Jigoku:
・Bus: Head to the West Exit of JR Beppu Station and take the Kamenoi Bus #2, 5, 24, or 41 (bound for Kannawa). Get off at the Umi Jigoku-mae or Kannawa bus stop and walk for a minute to reach Umi Jigoku. The bus ride should take about 20 minutes.
・Taxi: You can also take a taxi from JR Beppu Station or JR Kamegawa Station to Umi Jigoku. It will take between 10-15 minutes.

And to travel between the two districts:

Dive Into Hell at Beppu Onsen!

Although we absolutely cannot recommend literally diving into any of these seven hells, we do strongly encourage anyone visiting Beppu to stop by them. Each hell has something unique to offer, but what they all have is charm that keeps people coming back. For more information on how you can foray into Japan’s hell, check out the official English pamphlet. Enjoy your trip down under!

Beppu Onsen and its seven hells are located within Oita Prefecture, which is just one out of the seven different prefectures that make up Kyushu, arguably Japan's most scenic and historic region. If Beppu Onsen—a hot spring resort with far more to offer than just hot springs—is right up your alley, we think you'll love what the rest of Kyushu has to offer. Check out the official Kyushu tourism website for more information on what's out there in the region.