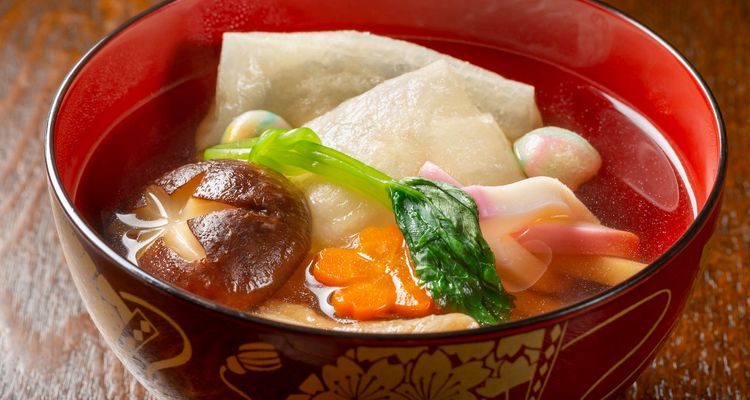 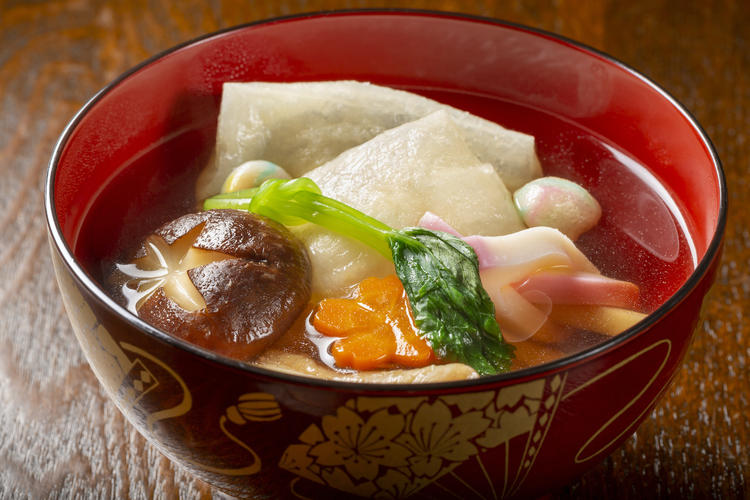 What Is Ozoni? All About This Traditional Japanese New Year's Food

What sorts of foods have become holiday traditions in your country? In Japan, people traditionally eat a special soup called “ozoni” for the New Year’s holiday every year. This article will explain the origins and ingredients of this traditional Japanese New Year’s cuisine. 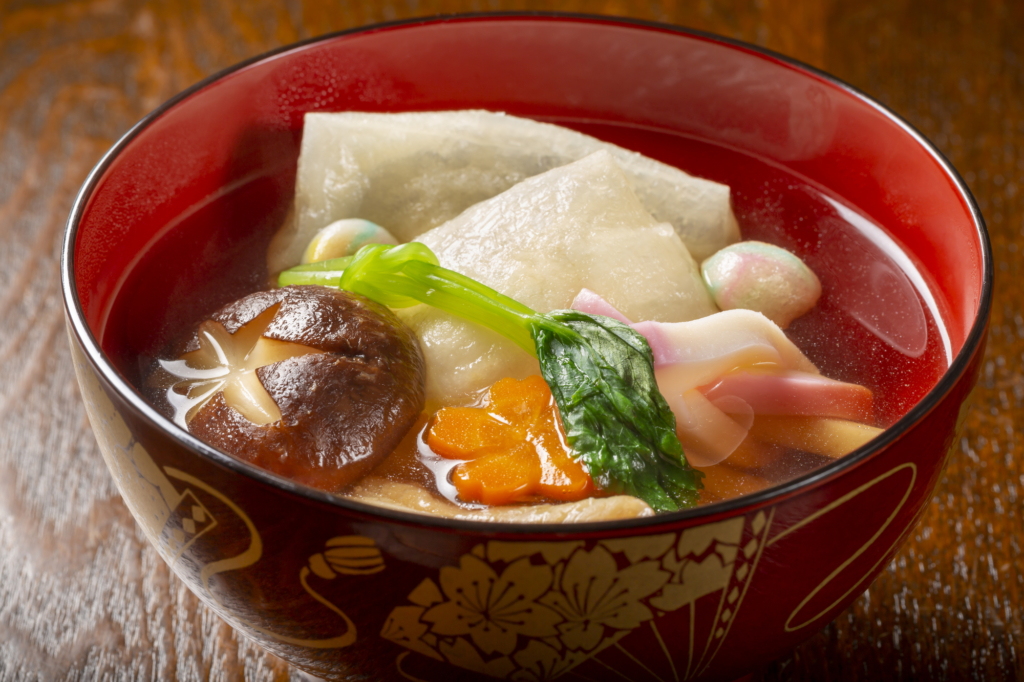 Ozoni is “mochi” (rice cake) soup with a miso or soy sauce-based broth. Ingredients other than mochi can include carrots, daikon radish, and green onions.

Ozoni has a long history that is said to go back as far as the Heian Period (794 – 1192). Mochi has always been associated with good fortune and has been eaten on celebratory occasions since long ago. The custom continues to this day and eating ozoni at New Year’s is considered an expression of good fortune (for making it to another year). While different regions and families might have their own ozoni recipes, it’s practically guaranteed to at least include mochi.

Let’s dig a bit deeper into what sort of flavors and ingredients go into ozoni.

What kind of Mochi Is Used in Ozoni? 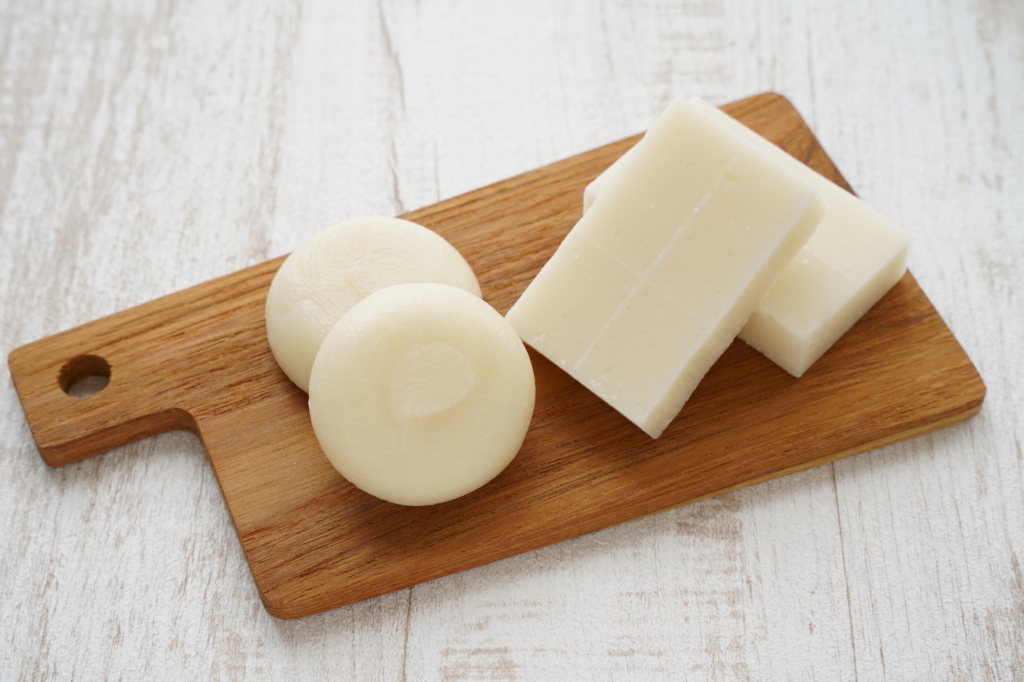 The mochi that you find in ozoni soup can be either circular or rectangular (see the image above), often depending on the region you’re in: you’re more likely to see circular mochi in western Japan and rectangular mochi in eastern Japan. Circular mochi is said to have been used because the kanji for circle 円 (“en”) features in the word harmonious or peaceful 円満(“enman”). Meanwhile, rectangular mochi came about for more practical reasons: in the Edo Period (1603 – 1867), when the population of the capital (in eastern Japan) began to skyrocket, the time-intensive procedure of making the mochi into a round shape was dropped, and a rectangular shape was favored instead, as it was easier to mass-produce.

How Is Mochi Cooked for Ozoni? 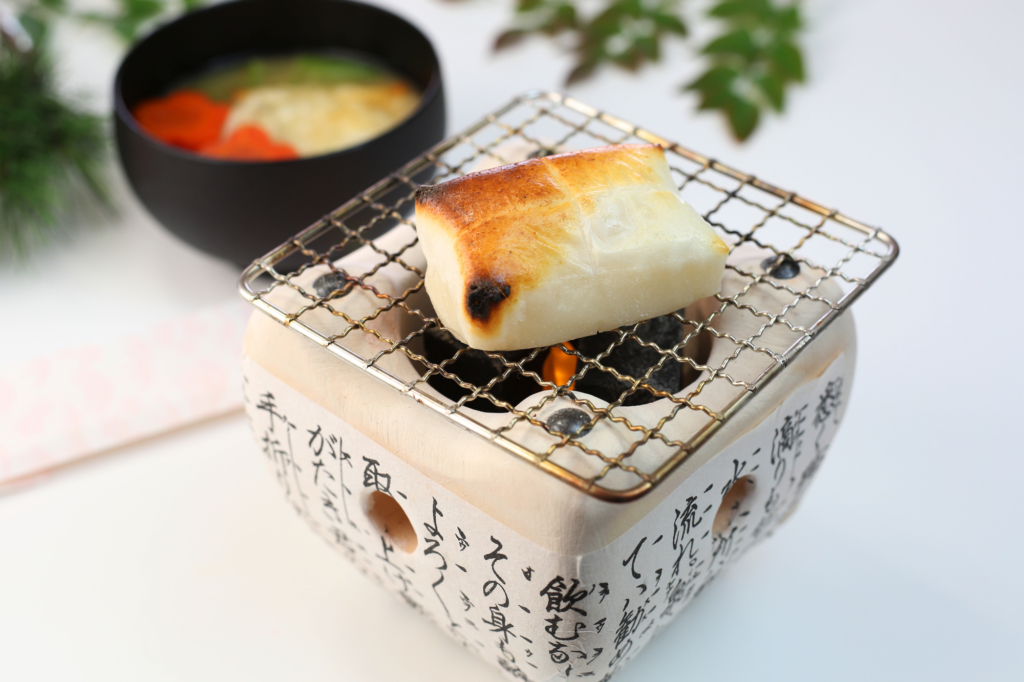 The mochi in ozoni can be stewed, grilled, or fried. Fried mochi is the rarest of the three, but it produces a crispy texture that is irresistibly tasty. The three methods of cooking yield different textures and flavors, so give them all a try and see which one you like best! 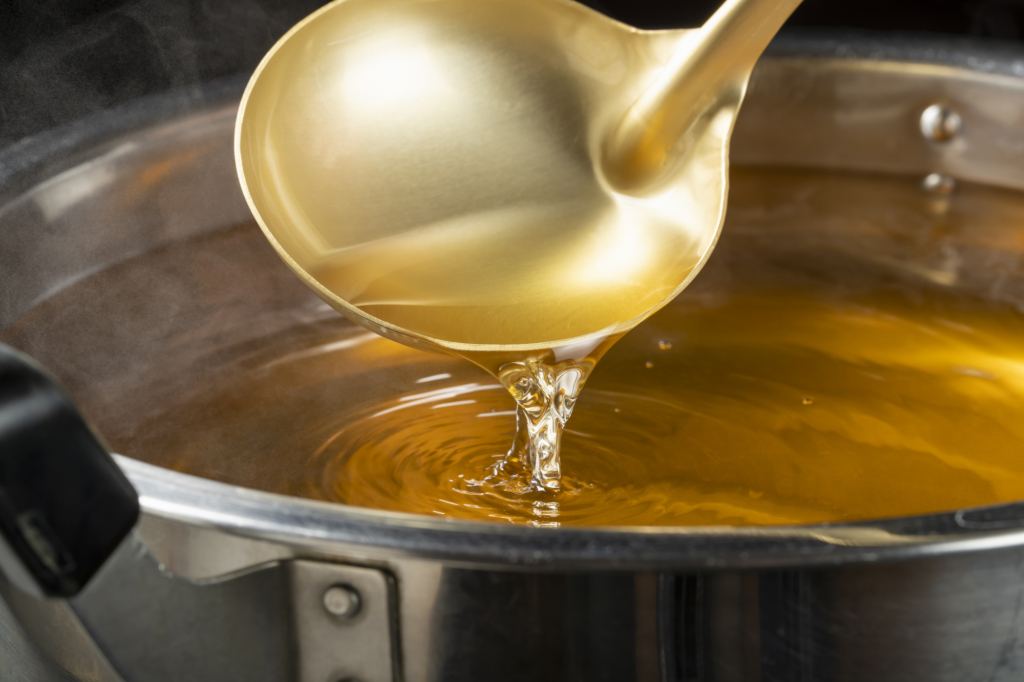 In general, the soup in ozoni can be “sumashi” (a simple broth seasoned with soy sauce and salt), white miso (a sweeter, less salty variety), light miso (saltier than white miso), or red bean. Less-common variants, found in particular corners of the country, include “mentsuyu” (noodle soup base) and soup made from seafood. 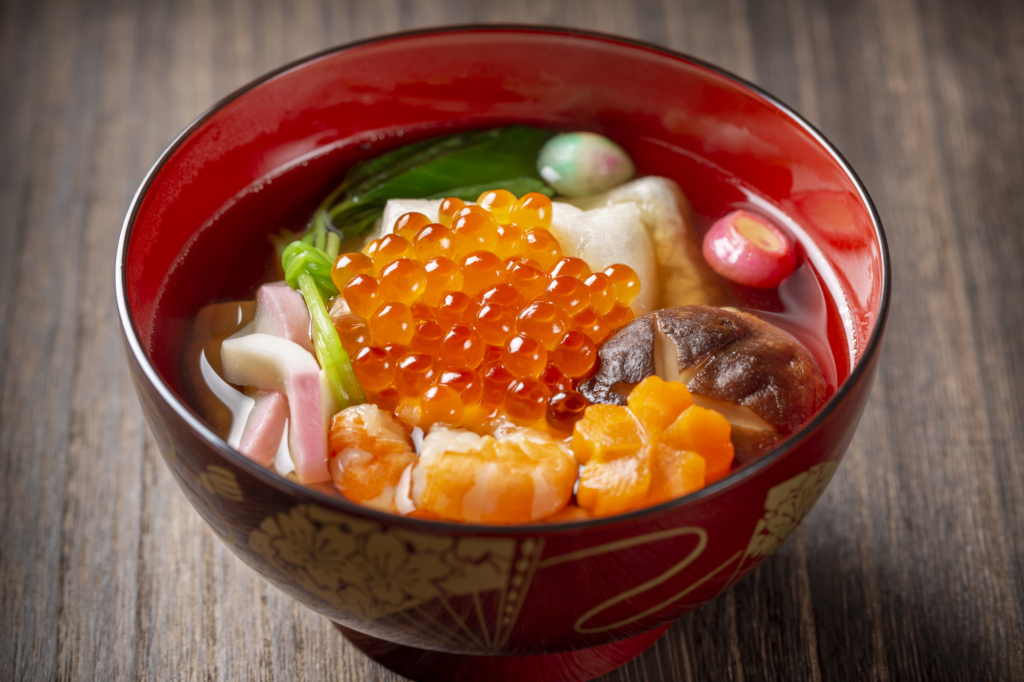 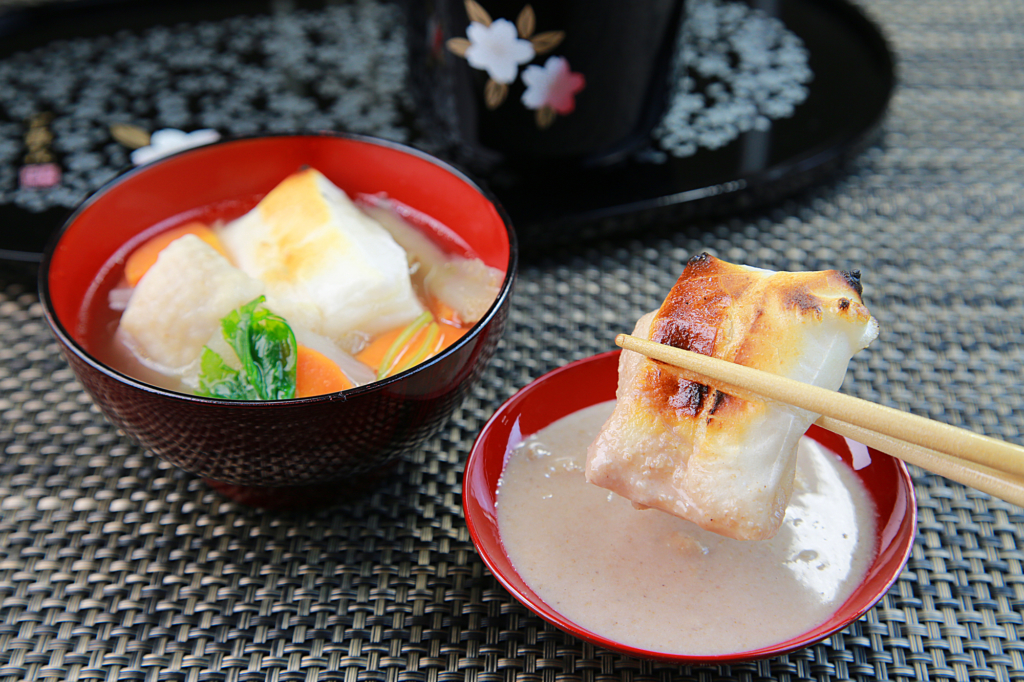 In the Miyako area within Iwate Prefecture, the local ozoni soup features a sumashi broth made from dried sardines and soy sauce. Ingredients include grilled (rectangular) mochi, daikon radish, carrot, burdock root, and salmon. The kicker is that the ingredients are dipped in a “walnut sauce” before eating, which includes ground walnuts sweetened with some sugar. The combination of the salty broth and the sweet, mellow sauce creates an exquisite harmony that’s more delicious than you can imagine! 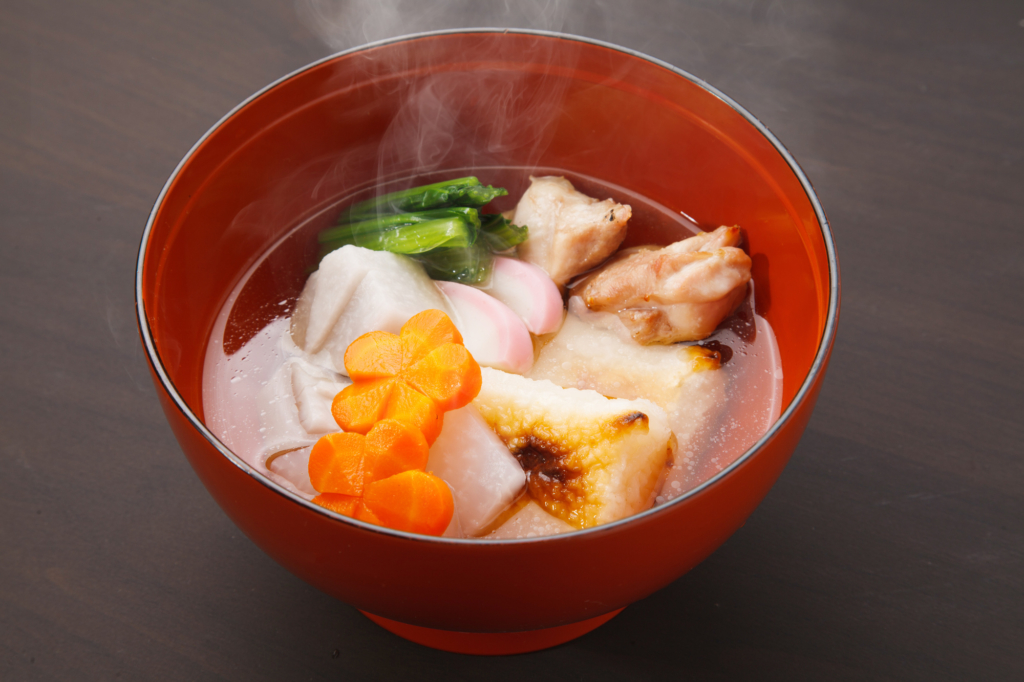 Ozoni from Kanagawa Prefecture tends to include a sumashi broth and grilled (rectangular) mochi, kamaboko (steamed seasoned fish paste), chicken, mushroom, carrot, and greens. Once you make sure to remove the odor and excess fat from the chicken, the soup remains clear and allows you to fully enjoy the subtle, natural flavors of each ingredient. Note that the kamaboko is colored red and white, the classic New Year’s color scheme: the red symbolizes protection against evil spirits, while the white represents purity, making this an extremely lucky food. 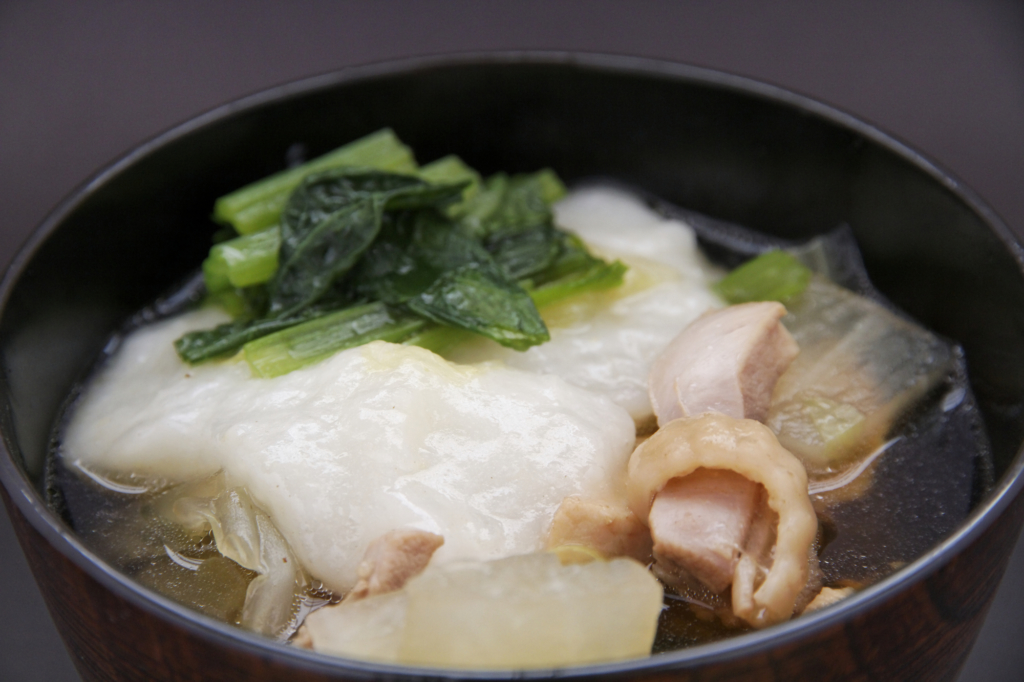 Ozoni in Tokyo features a sumashi soup made from a broth of kelp and chicken bones, as well as ingredients including grilled (rectangular) mochi, daikon radish, and Japanese mustard spinach. Make sure to stew for 30 minutes so the stock has maximum flavor, and you’ll end up with a properly savory bowl of soup. The mustard spinach should be added just before the soup is done, in order to maintain a bit of its texture. 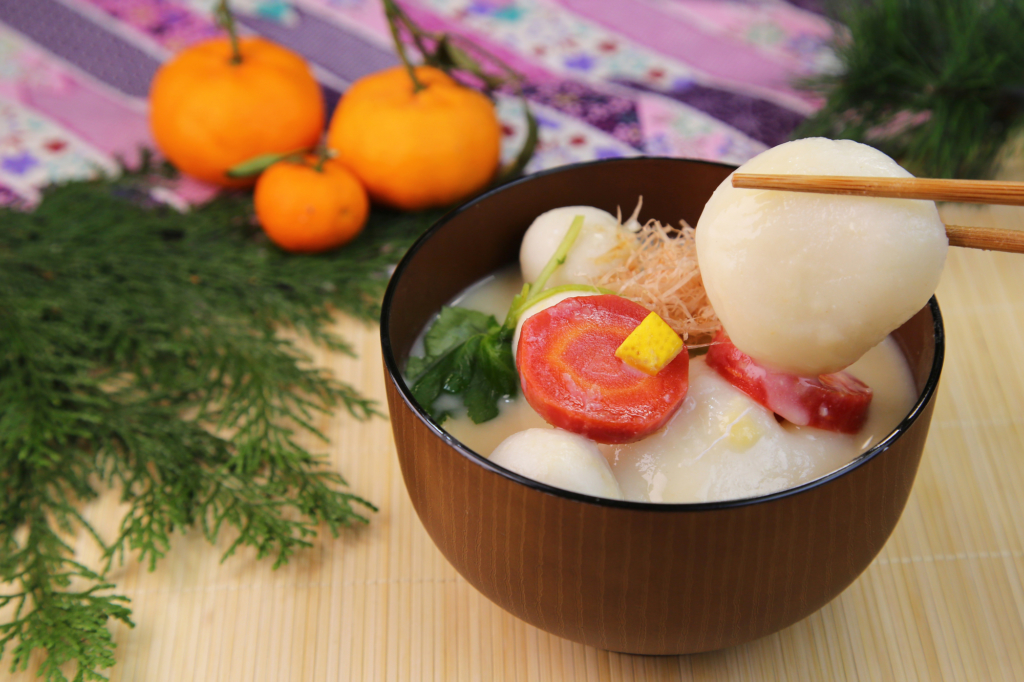 Ozoni from Kyoto Prefecture tends to be sweeter and uses white miso. Ingredients are very specific to Kyoto and include (circular) mochi, ebi-imo (a shrimp-shaped variety of taro that is traditional to Kyoto and considered to be lucky), kintoki carrots (also called Kyoto red carrots), and young greens. This bowl of soup lets you enjoy the sweetness of these veggies to their fullest. 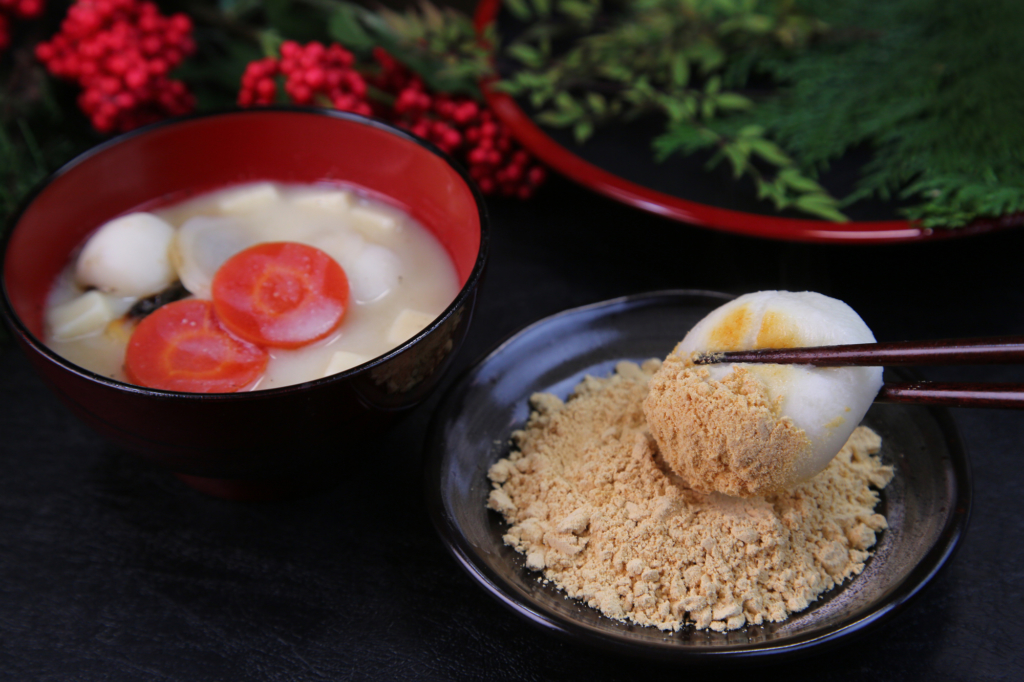 Nara Prefecture, being in the same region as Kyoto, tends to have similar broth and ingredients. Two points set it apart, however: first, not only is the mochi circular, but so are the other ingredients, for the similar reason of evoking the term 円満 (“enman”), meaning harmonious/peaceful. Second, the ingredients are dipped in kinako (roasted soybean flour) before eating. The miso broth and soybean topping form an excellent if uncommon combination! 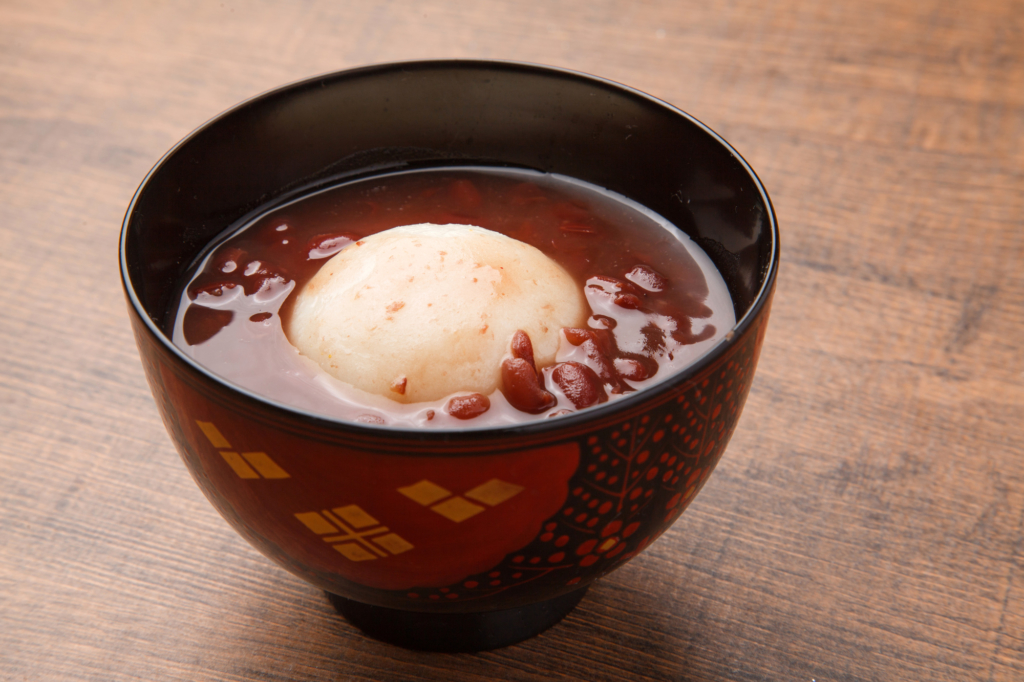 The city of Matsue in Shimane Prefecture has a tradition of eating zenzai—a sweetened red-bean soup with mochi—as their annual New Year’s ozoni. This is because the Sada Shrine in Matsue is regarded as the birthplace of zenzai. A bit of salt is added in addition to sugar, to bring out the sweetness even more. 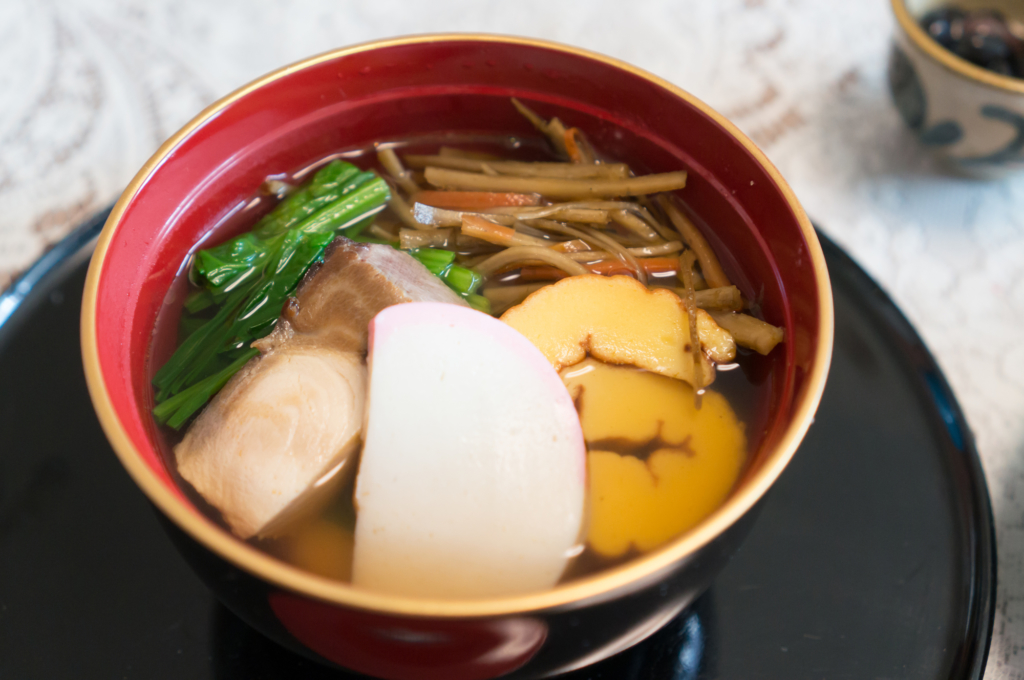 Okayama’s ozoni is made from a sumashi broth (made from kelp and bonito), stewed circular mochi, and most notably buri (Japanese amberjack). Buri is a type of fish that is given different names at different stages of maturity (called shusse-uo); because shusse more broadly means “getting ahead in life”, eating these types of fish is thought to bring good luck and success. The buri’s surface is grilled, adding a savory aroma and contributing to the flavor. 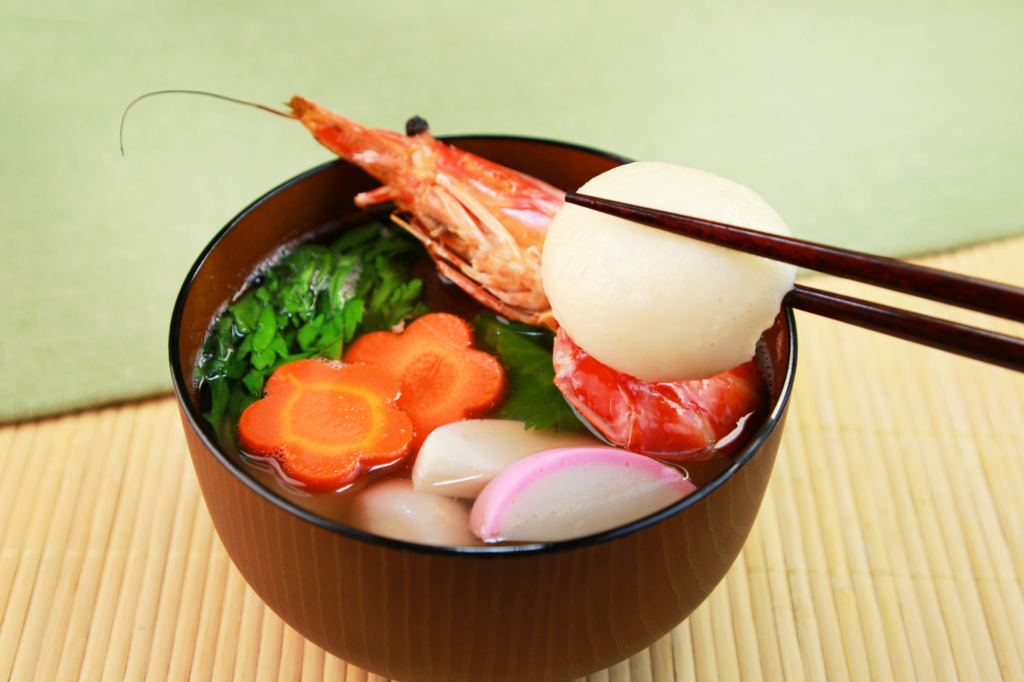 Kagoshima’s ozoni is based on a sumashi soup made from ingredients which are soaked overnight (including grilled dried shrimp, dried shiitake mushrooms, and kelp) and seasoned with Kagoshima’s distinctly sweet type of soy sauce. Other ingredients include stewed round mochi, as well as the shrimp and shiitake used for the broth. This dish allows you to savor each ingredient’s flavor and the aroma of the shrimp. 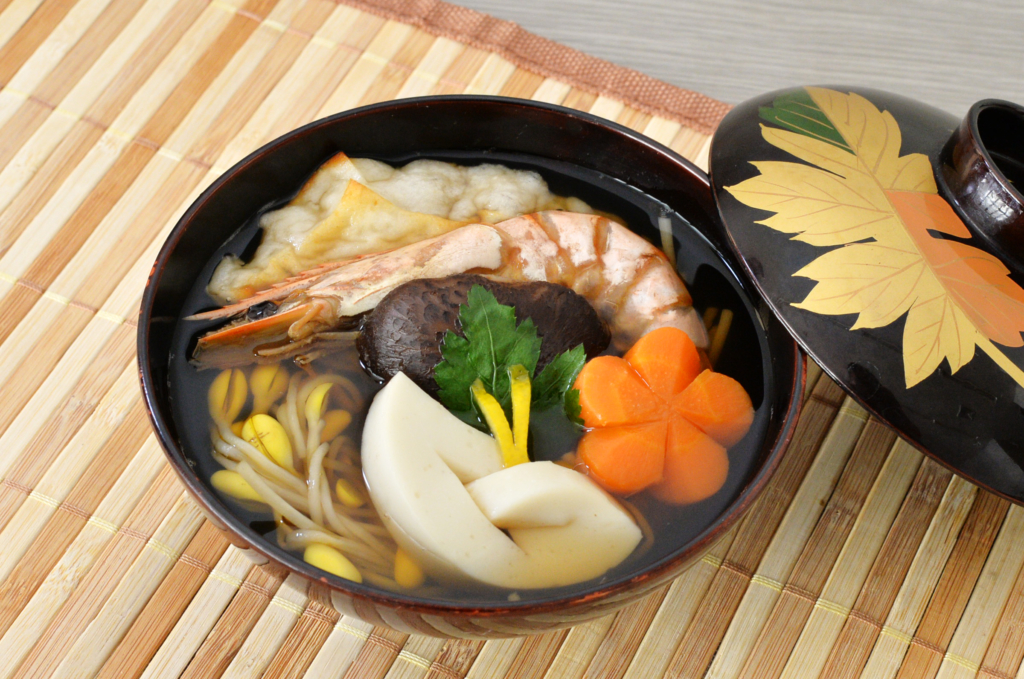 Miyazaki’s ozoni includes grilled circular mochi and bean sprouts in a sumashi soup. The bean sprouts offer a refreshing crunch. One distinctive feature of the soup is that all the ingredients are stewed together in a broth made from dried shiitake mushroom. Yuzu citrus and Japanese parsley are added as garnishes, offering extra aroma and color to round out this elegant soup.

What Kind of Ozoni Will You Be Enjoying This New Year’s?

This has been an introduction to all you need to know about ozoni, a Japanese New Year’s tradition. Learning about each region’s distinctive ingredients tells us a lot about their food culture and history, and of course, there are still further varieties that weren’t included here! If you can, try checking out all these different varieties and savoring each one.