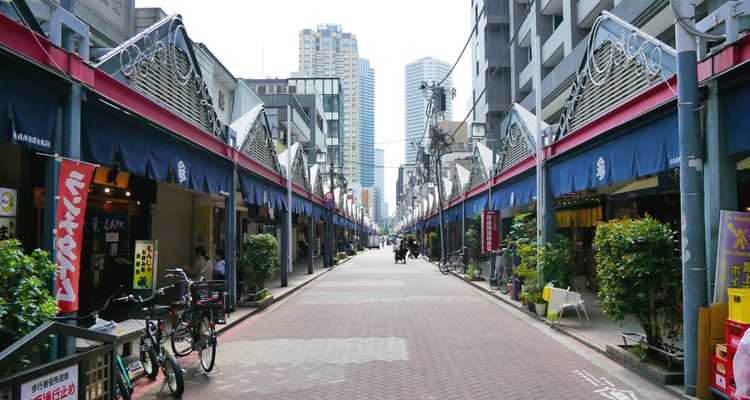 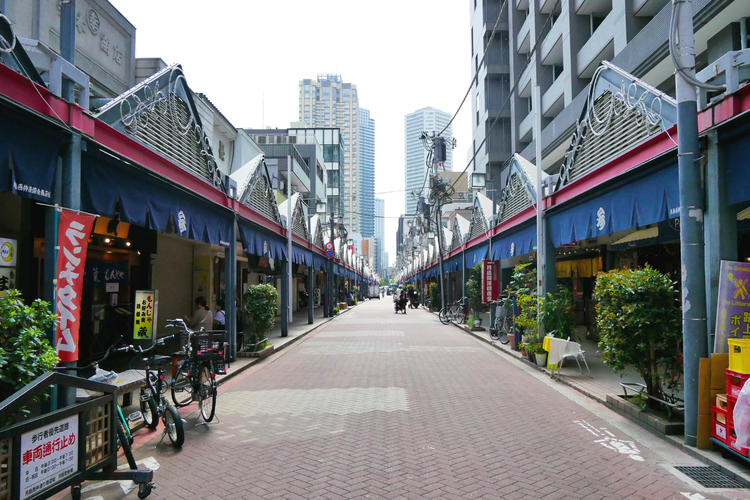 Tsukishima - A Unique, Retro Neighborhood in the Middle of the Sprawling Tokyo Cityscape

Sitting next to the Sumidagawa River among towering skyscrapers and modern structures is Tsukishima, a retro neighborhood in downtown Tokyo that exudes an atmosphere full of nostalgia. Offering a quaint change of pace while situated close to Tokyo’s other popular neighborhoods such as Ginza and Tsukiji, Tsukishima is beloved by locals and travelers alike. For this edition of our “Area of Japan” series, we ventured to this quiet corner of Tokyo to taste the local specialty “monjayaki” and view unique scenery merging retro and modern townscapes, so read on to learn more about our favorite spots!

Tsukishima is a man-made island that was created in 1892 using sediment that piled up along the Sumidagawa River. Although quiet right after its formation, it was developed into an industrial district towards the end of the Meiji period (1868 - 1912), and many laborers came to take up residence here. This changed the landscape, with rows of tenement houses being set up as well as shops to cater to the local residents. In order to be accessible to the working-class locals, many shops would sell their products for relatively cheap prices, and that along with other entertainment establishments in the area attracted lower and middle-class people from neighboring towns as well, feeding the effervescent energy.

Tokyo faced much devastation during the 20th century with the Great Kanto Earthquake of 1923 and bombings during World War II. However, as Tsukishima was regarded as an important industrial area, it was quickly rebuilt after the earthquake and was spared from heavy air raids due to the surrounding neighborhood hosting a hospital making it the perfect place to see unique, historic buildings.

One of the main highlights of Tsukishima is Tsukishima Monja Street, a paved road that stretches for about 500 meters and is sandwiched by around 80 shops on both sides. Although officially named Nishinaka Street, the lively street subsequently became affectionately known as “Tsukishima Monja Street” after becoming popular for a famous Tsukishima specialty called “monjayaki” (also known as “monja”) during the beginning of the Heisei period (1989 - 2019). It is now lined with rows and rows of monjayaki shops beckoning visitors with their retro exteriors, Japanese aesthetics, and charming decorations.

The shops are closely packed together with one tempting store after the other, yet each has its own unique charm that adds to the enjoyment of walking down the street while taking in the nostalgic atmosphere and searching for the next stop. The entirety of the street is framed by blue “noren” curtains, a symbol of Japanese hospitality, and subtle moon decorations paying homage to Tsukishima’s name which literally translates to “moon island.” Breaks between the buildings reveal quaint alleys overflowing with everyday charm, stacked with crates and offering glimpses of greenery.

If you make it to Tsukishima, trying monjayaki is a must, as it is said to have originated in the area! Although its precise origins are unclear, it is believed that it evolved during the mid-20th century from a cheap snack called “monjiyaki.” Monjiyaki has been around for centuries and was made from a runny batter cooked atop a griddle. Popular among the local children during the development of Tsukishima, it is likely that monjiyaki grew into monjayaki, as it too is made from a thin batter and cooked on a griddle, and the similarity in the names would also indicate this.

Although labeled a Tokyo specialty, monjayaki shops are concentrated around the Asakusa and particularly Tsukishima neighborhoods, with many venturing to the latter to enjoy delicious, authentic monjayaki. Among the plethora of monjayaki shops to choose from, many patronize Tsukishima Monja Moheji, a beloved establishment run in tandem with a 150-year-old fishmonger. Fresh seafood is brought in almost daily from Toyosu Market, one of the largest fish markets in the world, which is evident in the delicious flavors of the food and seasonal menu.

Unsure of which monjayaki to pick among the numerous mouth-watering options, we were advised to go with the fan-favorite “Mentaiko (spicy pollack roe) Mochi Monja.” A few minutes later, a bowl with Tsukishima Monja Moheji’s signature stock topped with a mountain of cabbage, decorated with delicately-balanced mochi cubes, and crowned with a glistening pink piece of mentaiko appeared before us, ready to be poured onto the griddle. Tsukishima Monja Moheji is the perfect establishment for beginners, as staff prepare the dish on the griddle for you. Watch carefully, for their masterful movements finish in what feels like the blink of an eye!

Monjayaki’s finished appearance is admittedly surprising, as what sits before you is a rather unassuming layer of inconspicuous ingredients. However, the taste will also surprise you, as every bite overflows with flavors that dance throughout your mouth. Tsukishima Moheji Monja’s monjayaki stock is made with a unique blend of seafood, chicken bones, and potherbs, bursting with umami and accentuating the nuanced flavors of the other ingredients.

We opted to add cheese as a topping, which mellowed out the mentaiko and added a gentle richness that harmonized the already delectable mix. The outer edges crisped up first and tasted more savory, while the runnier parts still had clear flavors of the mentaiko and cheese and chewy bites of mochi. You do not need to worry about rushing to finish the monjayaki, as the flavors will continue to evolve as it cooks! The tables are also equipped with several sauces and seasonings, so you can adjust as you like.

Although we visited in the mid-afternoon, the seats were full of customers happily chatting around the griddles cooking savory portions of monjayaki. Tsukishima Monja Moheji is deservedly very popular, so it is best to make a reservation if you do not want to wait. As the main branch is also fairly compact, if you are visiting with a larger group, it is better to visit the “Hanare” or “Hanare no Hanare” branches, both also located along Tsukishima Monja Street. By the way, squid ink monjayaki is particularly popular among the staff, so if you are up for a little adventurous eating, be sure to give it a try!

Melonpan is a beloved Japanese pastry that is a common sight in convenience stores, named for its resemblance to a melon rather than its taste. However, nothing beats a fresh melonpan, so if you want to taste the real deal, head over to Tsukishima Kyuei! Also located along Tsukishima Monja Street, this melonpan specialty shop has gained massive popularity over the years, with posters of television appearances displayed above the storefront acting as a testament to its sparkling reputation. We were hypnotized by the sweet scent surrounding the shop, attracting us like moths to a flame.

Tsukishima Kyuei continuously bakes melonpan and other pastries such as hand-held pies and croissants throughout the day, replenishing when they see that they are running low and keeping their stock fresh. Their products are tantalizingly lined up against the store window, attracting visitors from afar and enticing passersby to stop and indulge in the scrumptious pastries. As their signature item is melonpan, we of course had to delight in a freshly-baked melonpan ourselves, and also grabbed a scrumptious-looking apple pie and bag of melonpan rusks while we were there as well.

While pre-packaged melonpan is often spongy and the upper crust only lightly crunchy, Tsukishima Kyuei’s melonpan was fluffy with a delightfully crisp top layer. We could clearly see the sugar that accentuated the sweetness of the bread crystalized atop the golden-brown grooves of the melonpan, melting in our mouths with each bite. It is no wonder that people wander all the way to Tsukishima just to get a taste of this melonpan!

The apple pie was equally as delicious, with the succulent apple filling pairing beautifully with the buttery, flaky crust. Our purchases were gone before we knew it, leaving us happy and satisfied, but our sweet tooths still called for more. Luckily, we still had our bag of enticing melonpan rusks, which are the dried top layer of the melonpan, that we could snack on later. While crunchy, they easily break apart between your teeth and maintain the heavenly taste of Tsukishima Kyuei’s freshly-baked melonpan. These pre-packaged goodies make for great souvenirs, although any recipient would be jealous that you got to munch on the freshly-baked version!

A short walk from the bustling Tsukishima Monja Street are the quaint residences and retro-looking shops of the Tsukuda area, accentuated by the towering Tokyo buildings in the backdrop. The Tsukuda area was developed in the late 16th century by fishermen from present-day Osaka who were invited to the area by none other than the famed “shogun” (military general) Tokugawa Ieyasu to help strengthen the fishing and hunting industries in Edo (modern-day Tokyo).

When walking along the charming roads past the eclectic mix of contemporary and mid-century apartments, we spotted a captivating pop of color in the distance, and upon closer inspection realized it was a traditional Japanese bridge quietly standing among the modern Tokyo landscape. The vermilion, Japanese-style railings of this bridge offer a vibrant contrast against the muted colors of the surrounding retro buildings and apartments. Although the current bridge was built in 1984, it offers a sense of the geography while the area was still being developed, standing in almost the exact same location of a man-made moat that separated the then island of Tsukuda into eastern and western areas.

The bridge looks upon a small dockage where local fishing boats moor, serenely swaying atop the water while waiting to be taken out for service. The surrounding area is filled with local charm, with residences, shops, and a small park, and residents leisurely making their way through the streets while happily greeting each other, offering a delightful glimpse into everyday Japanese lifestyles.

The view from the bridge is a visual example of the modernization of Tokyo, yet also illustrates the harmony between the old and new. The small park right by the bridge is the perfect place to rest, sitting on a bench surrounded by trees and shrubs while taking in the sight of the bridge crossing the river with the fascinating amalgamation of buildings in the background.

The Sumidagawa River Terrace is a lengthy paved walkway located along the Sumidagawa River, stretching a total of 32 kilometers beside the river’s route throughout Tokyo and passing Tsukishima and the neighboring Kachidoki. Although popular for jogging and walking, we took a short walk towards the river to just relax and take in the scenery when we wanted a little break. After taking a leisurely stroll and admiring the buildings in the distance, we stopped and sat upon one of the numerous benches overlooking the water, watching boats putting atop the gentle blue ripples while breathing in the salty air.

The terrace offers remarkable views of the urban Tokyo skyline and, depending on the location and angle, you can even see Tokyo Tower or Tokyo Skytree in the distance! While blending in with the other buildings during the day, both towers are beautifully illuminated at night, standing prominent against the twinkling lights of the Tokyo skyscrapers and offering a romantic vibe different from the daytime.

Tsukishima is a truly unique neighborhood in Tokyo with its blend of retro and modern aesthetics and waterfront views, and is also one of the few places where you can try authentic monjayaki! If you’re looking for a change of pace while staying close to Tokyo’s other popular neighborhoods, look no further than Tsukishima!