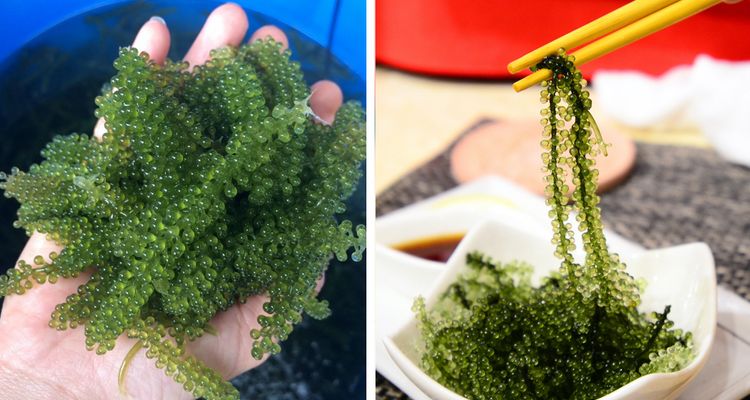 All About Umibudo (Sea Grapes) - Where to Buy, Recipe, and More!

This article will answer every question you might have about umibudo (sea grapes) including: What is umibudo? Where does it come from? What does it taste like? How can I buy some to try for myself? What are the health benefits of eating this strange, cute, sea plant? And more!

In Japanese, the word "umibudo" translates literally to "sea grapes," which is exactly what they are called in English. Sea grapes, however, are actually a type of seaweed (not to be confused with the seagrape tree native to the Caribbean) that grows in the shallow waters around Okinawa and many other parts of Southeast Asia. The standard Japanese word for umibudo that nobody knows is actually "kubiretsuta" and the scientific name for sea grapes that nobody knows is "caulerpa lentillifera." Since those words are way too difficult to remember, everyone (Japanese people included) calls the seaweed by nicknames, another of which is "green caviar" because of its resemblance to fish roe.

If you’ve spent some time watching ASMR videos (if you don’t know what that is, you should definitely look it up), you might have seen someone crunching on what looks like a miniature bunch of green grapes; that’s umibudo. The seaweed is a delicacy that is prized for its nice taste and wonderfully satisfying texture.

Umibudo has a fresh, ocean-like flavor and is quite salty. Perhaps the best part about it, though, is the crunchy texture that comes from the tiny bubbles popping as you bite them. If you’ve ever eaten other kinds of seaweed such as kombu or wakame, you’ll have some idea of the basic flavor profile, but the texture is fairly unique.

Where Does Umibudo Come From?

In Japan, the huge majority of the umibudo consumed in the country is harvested in Okinawa, the tropical archipelago southwest of the main Japanese islands. This is because umibudo thrives in sandy-floored, shallow ocean water with a mild temperature. The average ocean temperature in Okinawa is around 25°C/77°F, which is apparently ideal for umibudo. Although umibudo was traditionally harvested naturally from the ocean floor, due to increased demand and overharvesting, most umibudo is now grown and harvested from local sea grape farms.

Where Can I Buy Sea Grapes and How Much Do They Cost?

Even if you don’t live somewhere in Southeast Asia where umibudo can be easily purchased, it is still possible to get your hands on some thanks to modern technology. A quick Google search for umibudo will turn up quite a few online retailers selling packs of dehydrated umibudo soaked in a salty seawater bine. This is actually a common method of packing, even for umibudo sold in Japan, as the shelf life of freshly harvested umibudo is quite short. Umibudo packaged in this way just needs to be soaked in fresh water for a few minutes to rehydrate the seaweed, but then it can be enjoyed in exactly the same way as fresh umibudo.

The price of umibudo varies based on where you purchase it, but generally expect to pay somewhere between 1,000  and 2,000 yen per 100 grams when buying online. This is much more expensive than purchasing umibudo directly from a store in Okinawa, but there’s no way around it. Here are a couple of links to websites that sell umibudo overseas:

In addition to being tasty and fun to eat, umibudo is also quite the health food. In Japan, umibudo is thought of as beneficial to skin health, as the seaweed is packed full of minerals that help the skin retain its elasticity, including iron, calcium, magnesium, and iodine. In addition, umibudo is rich with something called "hyaluronic acid," which is a common ingredient in lotions and other skincare products and which has benefits that range from skin healing, to wound repair, to cell migration. All of these benefits come in a food that is high in dietary fiber and has only 4 calories per 100 grams, making it especially popular among the health and beauty conscious.

How Do People Eat Umibudo?

Although other kinds of seaweeds are sometimes cooked in soups or grilled, umibudo is almost always eaten raw. People sometimes ask if you can cook umibudo, but the answer is that you really wouldn’t want to, as much of the flavor, and more importantly—the texture—would be thoroughly destroyed.

Umibudo can be eaten as-is, dipped in some sort of sauce like ponzu (a citrusy soy sauce), eaten with sashimi, used as a topping for various dishes, made into sushi, and more. It adds a wonderful freshness and textural contrast to whatever dish it is added to and is actually quite versatile.

For two servings of salad, combine the ingredients below and add the dressing of your choice. I recommend a soy sauce-based dressing.

Ingredients:
- Umibudo (as much as desired)
- 1 can of tuna
- Lettuce (enough for two people)
- 1 sliced tomato
- 1 avocado
- 2 chopped green onions

Umibudo is one of the coolest types of seaweed that everyone should try if they get a chance. Especially if you visit Okinawa, this is one of the local specialties that you don’t want to miss. For more information about the local food in Okinawa, check out our article of the Top 10 Local Cuisines to Try In Okinawa.