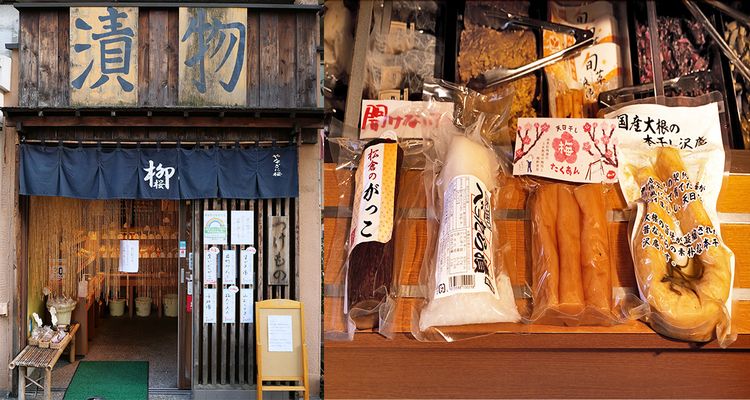 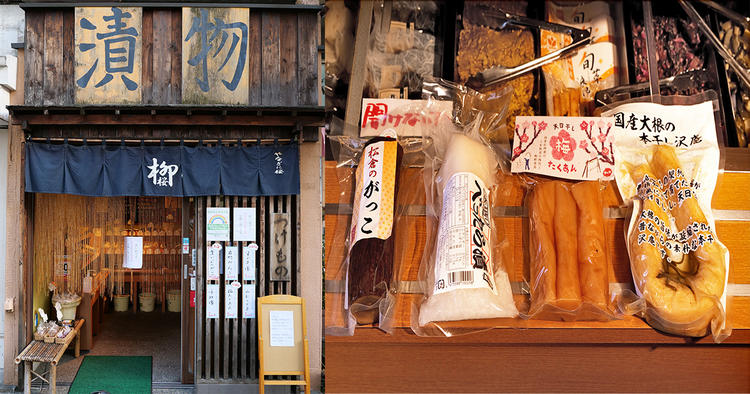 Japanese pickled products, known as “tsukemono,” aren’t just an affordable healthy food, but are also a nutritiously crucial part of Japanese cuisine. They have long been a colorful addition to the Japanese dining table, served as part of the country’s traditional cooking. One of the most interesting things about tsukemono is the sheer variety of vegetables they can be made from, as well as the multitude of pickling methods. In order to learn more about this food for this edition of our “Culture of Japan” series, tsunagu Japan visited Yanagi Ni Sakura, a tsukemono specialty store in Tokyo. Here's what we discovered.

"Tsukemono" literally means “preserved things” and extends beyond vegetables and fruit, also applying to meats and seafood that have been seasoned with and preserved in salt, vinegar, or other condiments and spices. This method of food preparation is believed to have been used as far back as the Stone Age in order to preserve food for the winter.

According to Japanese records, tsukemono first appeared in Japan during the Nara Period (710 – 794). At the time, the main vegetables used for tsukemono were daikon radishes, eggplants, soybeans, winter melons, and garlic. Pickles were considered a scarce luxury food only for the upper classes like the nobility and Buddhist monks until the Heian Period (794 – 1185), due to vegetable cultivation not being as widespread back then as it is today.

The original purpose of tsukemono was to preserve vegetables for times when they were not available, such as winter. However, by the Edo Period (1603 – 1868), the variety of vegetables and other ingredients had increased, leading to a wider choice in tsukemono and people paying more attention to the flavors of pickles. This was also when asazuke, which are pickles with shorter preparation times such as toza-zuke (prepared over a few days to a few weeks) and ichiya-zuke (prepared overnight), first appeared in the country. Tsukemono were no longer just a way of preserving food, but a method of preparing food.

The Characteristics of Tsukemono

Making pickles isn’t that complicated, which is why many other countries have their own take on the food. But when it comes to the sheer number and variety of pickles, Japan ranks in the top and has even been called “one of the world's leading pickle countries.” In Japan, all kinds of vegetables are made into tsukemono, from classic favorites like daikon radish, cucumbers, eggplants, and carrots, to more unique produce such as burdock root, yams, and okra. Japan’s distinctive four seasons provide a wide assortment of seasonal vegetables ready to be made into tsukemono all year round.

When making tsukemono, the method of pickling changes depending on the vegetables, other ingredients, and seasonings used. This allows for a wide variety of tsukemono, each boasting their own unique flavor. Tsukemono can be roughly divided into the following categories:

Japanese people have been eating tsukemono for over a millennium, from the Heian Period up to modern times. Though originally developed as a way to preserve vegetables, tsukemono have grown in popularity due to their palatability and high nutritional value, becoming an indispensable part of Japanese cuisine. Known as “washoku,” traditional Japanese cooking consists of rice, soup, and three side dishes: tsukemono, “nimono” (boiled/simmered foods), and “yakimono” (fried/grilled foods). In Japan, seasonal ingredients are prepared in ways that let their original flavors shine through, according to the philosophy of "cherishing what nature gives us each season." This is also the reason why Japanese food is widely considered to be so nutritious and healthy.

In summary, tsukemono are a crucial component of Japanese food. They not only add color to the dining table but also play a vital role in maintaining the nutritional balance of a meal.

Tsukemono contain more fiber than raw vegetables, making them great for people suffering from obesity, constipation, or high cholesterol. Pickles also don't need to be cooked, preserving the vegetables’ vitamins, minerals, and fiber. Furthermore, the other ingredients used to make tsukemono such as vinegar, miso, and rice bran are regarded as very healthy fermented foods. Methods such as shio-zuke, nuka-zuke, and koji-zuke also produce lactic acid, which is very beneficial to the digestive system and intestinal health.

Perhaps the one big disadvantage to this healthy food is how high in sodium it is. Eating too many salty tsukemono can lead to high blood pressure or heart problems. The sour taste might really get your appetite going, but be careful not to eat too much!

Yanagi Ni Sakura: Traditional Tsukemono Made With No Additives

In order to learn more about the world of Japanese tsukemono, we spoke with Mr. Yanagisawa, the owner of the pickle specialty store Yanagi Ni Sakura, located just a 2-minute walk from Sendagi Station in Tokyo. The exterior of this tiny shop is outfitted with a navy black "noren" curtain as well as a worn wooden plaque that says "tsukemono" on it in Japanese. Its charming appearance has surely drawn in many passersby!

Mr. Yanagisawa once worked at a tsukemono shop in Tsukiji Market. Most of their customers worked for restaurants and eateries, so they were more concerned with price rather than the taste or quality of the pickles. Saddened by how he wasn't really able to introduce his favorite tsukemono to the shop's customers, Mr. Yanagisawa eventually made the decision to open his own tsukemono store. And so, in 2011, Yanagi Ni Sakura officially opened its doors. With the desire to provide his customers with unforgettable flavors, Mr. Yanagisawa carefully selects the best of the best from all the Japanese pickles that he’s tasted.

A Selection of Tsukemono From All Over Japan

Yanagi Ni Sakura currently stocks around 50 different tsukemono selected from all over the country. Each region not only has a different way of making pickles, they also work with vegetables whose unique flavor has been influenced by the local climate and geographical features.

Mr. Yanagisawa took the time to explain the differences in each regional tsukemono. For example, Hokkaido and Tohoku are cold regions with long winters, so their tsukemono are often fermented and preserved for a long time. In the Kansai region, home to such cities as Kyoto, the climate is milder which allows the locals to focus more on the flavor rather than preservation, making quick and easy asa-zuke the most popular way of pickling there. And then there's Kyushu. Though the weather there doesn’t get too cold, they're famous for takuan-zuke or daikon radishes (which are grown in abundance on the island) that are dried and then pickled in rice bran for several months.

Even when the vegetables and pickling methods are the same, the taste of tsukemono often varies from region to region. Try out several to see which one you like the most!

Additive-Free, Traditional Tsukemono at Your Fingertips

When we asked what made Yanagi Ni Sakura's tsukemono special, Mr. Yanagisawa remarked that he did his best to stock additive-free pickles made from domestically-grown vegetables. According to him, though tsukemono were originally a very healthy food, that’s not always the case anymore because of the use of modern preservatives and coloring agents. The traditional tsukemono made 1,000 years ago did not have any additives because those didn’t exist in Japan back then. It wasn't until about 100 years ago when they started to be used in Japanese pickles.

Over half of the tsukemono stocked at Yanagi Ni Sakura are free of additives, an impressive feat considering that the variety has become increasingly rare in Japan. Mr. Yanagisawa said it’s because making tsukemono the traditional way is actually quite difficult. He plans to continue increasing the number of his additive-free products in order to let the customers enjoy the most delicious and healthy pickles possible. By increasing the variety on offer, he also hopes to encourage Japanese people to start eating more tsukemono like in the past.

How to Reap the Health Benefits of Tsukemono

According to Mr. Yanagisawa, tsukemono recently have been gaining attention not only for their preservation powers but also for their taste and health benefits. The Japanese are producing a wider variety of vegetables and finding ways to grow produce even in winter, so it’s become easier and easier to enjoy all sorts of vegetables all year round. Still, you can’t beat the flavor and nutritional value of tsukemono made from in-season produce. That’s why the Japanese eat cucumbers in the summer, daikon radish in the winter, su-zuke ginger in the fall, and sansai (Japanese mountain vegetables) in the spring!

Zha cai is a type of mustard plant native to Chongqing, China. The one sold at Yanagi Ni Sakura has been pickled in white soy sauce mixed with a variety of herbs and spices, which do not affect the green color and flavor of the zha cai because of the quick asa-zuke method. This tsukemono is beloved by many for its satisfying crunchiness, a classic feature of zha cai. It's rare to find, so if you visit Yanagi Ni Sakura, please make sure to buy and try it.

Unlike other places that use yuzu citrus juice, Yanagi Ni Sakura uses lemon juice to pickle daikon radish. The resulting tsukemono has the scent and slight sweetness of lemon, and surprises you with how refreshing it feels in your mouth.

The most popular tsukemono purchased by international customers at Yanagi Ni Sakura is “iburi gakko,” a famous daikon radish pickle from Akita Prefecture. The radish is smoked, dried, and then pickled in rice bran. It’s crunchy and has a well-balanced flavor with just the right amounts of saltiness, sweetness, and smokiness to it.

Yanagi Ni Sakura also stocks several original nuka-zuke tsukemono, such as carrots, daikon radish, and cucumbers. Of course, they're all free of additives.

The store has an online store and even offers international shipping. So, even if you're not located in Japan, you can still try the best of Japanese tsukemono through Yanagi Ni Sakura.

Tsukemono are an essential component of Japanese cuisine. They not only add colors and flavors to a meal, but are also nutritious and incredibly healthy. While pickles are relatively easy to make at home, check out Yanagi Ni Sakura for rarer varieties from all over Japan. Tsukemono also make great Japanese souvenirs for your friends and family!