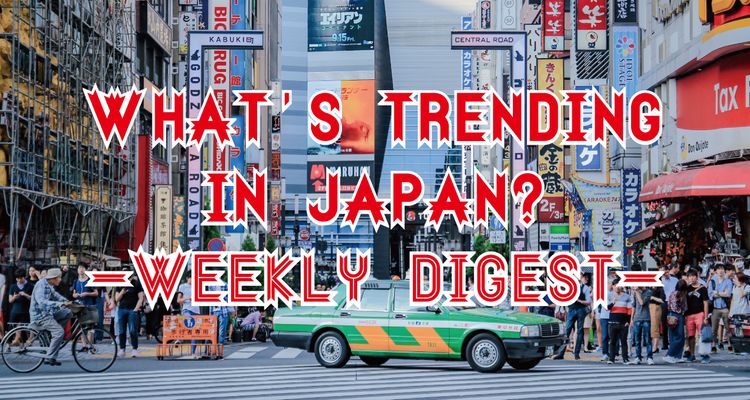 Are you sick of getting late news on the newest hot topics in Japan? Here's a quick and easy weekly digest that'll give you the scoop on the top 3 trends making waves on Japan's social media platforms! This week's scoop involves a new limited-time McDonald's burger, a currency exchange converter that will change your life, and some of the cutest Japanese sweets you'll see around.

You Can Only Get This McDonald's Menu Item Once a Year!

If you're looking for something to buy in Japan, this limited-time McDonald's menu item just might be for you. Titled the "Kin no Tsukimi Burger", it can be found in McDonald's all over Japan from August 29, 2018 until early October.

This burger consists of deliciously sweet buttered buns, thick cheddar cheese, salty smoked bacon, a thick layer of eggs, and a vinegary sauce. It is the ultimate, luxe version of the Tsukimi burger series, which is only sold once a year to celebrate Japan's mid-autumn festival (September 24, 2018).

Sound interesting? Well, this burger series is so popular that even though it has just been released in-store, it is already selling out in many McDonald's Japan branches. Don't just sit there - this is one food item in Japan that you have to try!

Get Rid of All Your Small Coins Before Leaving Japan!

"I have a bunch of 1-yen coins and I don't know what to do with them!" This is a sentiment that many tourists share. After all, what can you buy in Japan with just a few yen?

This currency exchange machine is every traveler's savior. Developed by a Japanese company, it allows you to exchange all your coins - USD, EUR, CNY, KRW, JPY, HKD, SGD, and so on - for digital currency or gift cards! Check out the video above to see what we mean.

*The video's in Japanese, but the actual machine offers support in at least 6 different languages, including English, Chinese, and Korean. Did we mention that this isn't just for Japanese yen? Toss in USD, SGD - it'll work the same way! While you're at it, toss in any loose bills - it'll eat that up as well! You can put in multiple currencies' worth of coins or bills in one go.

While you can convert your coins or bills into Japanese digital currency or gift cards from companies like Amazon JP, you can do so much more than that. If you're on the way home to the US, turn your coins into a Target eGiftCard! Or WePay money if China is the next destination on your Asia travel list.

The possibilities are endless! Japanese people are already in on the trend, but will you follow?

Make Like an Ant & Eat Sugary Sweets Off a Leaf!

What's not to love about these sweets? They're pastel, uniformly round, and look like they'd make great Instagram pictures. Truth be told, they come from a newly opened dessert cafe in Osaka, Shiratama +.

As the name might suggest, this cafe specializes in shiratama (rice flour dumplings). There are roughly 24 items on the menu that pair shiratama in a multitude of ways. Some of them even have chocolate fillings!

If you're not a fan of sweet stuff, don't worry - they offer savory shiratama pairings too! You'll find unusual matches like curry, tomato and cheese, and so on. There's a combo for everybody, so if you're looking for something to eat in Japan, check this place out!

Bonus: 3 Japanese Festivals in Tokyo That You Can't Miss in September 2018

There are more than 300,000 traditional festivals held annually all across Japan. Portable shrines (mikoshi), floats, food stalls, and games are just some of the common features you can find. From traditional dances to a procession of prostitutes, read the article below to see the things you can do in September 2018!

And that's that! The trends are always quickly changing, so there will always be something new from week to week. Check back in once a week and see if anything catches your eye!

Check out the weekly trends from the past 5 weeks!