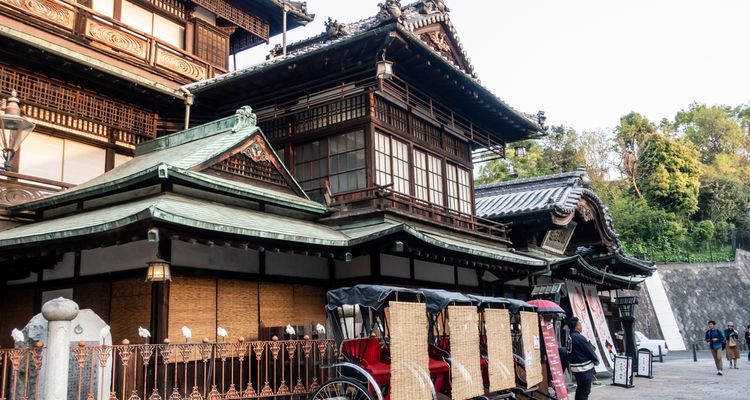 Shikoku is an island in southern Japan made up of 4 prefectures - Tokushima, Ehime, Kagawa, and Kochi. Separated by sea from Honshu Island, where Tokyo and Osaka lie, Shikoku has an abundance of nature and a unique culture which is still thriving to this day. There are a lot of photogenic spots in Shikoku that can only be seen to be believed. This article has handpicked the best 12 of these stunning spots.

Iyanokazura Bashi is a suspension bridge in the mountains of Nishi Yayama village, Miyoshi City. The suspension bridge is made from tangled Shikuchi Kazura vines (Actinidia Arguta), which are native to that particular area. With a length of 45m, and 14m to the surface of the water, this thrilling suspension bridge shakes back and forth whenever someone walks on it. Although it is very sturdily built and quite safe, it might take some courage to walk across! Built entirely of natural materials, this bridge goes beautifully well with its surrounding nature. Wonderfully attractive photographs can be taken not only from on the bridge itself, but also from the surrounding areas.

If you aren’t scared of heights, then looking down is highly recommended, as the flow of the beautifully clear river below can be seen from within the gaps in the wood.

Naruto Channel, located between Hyogo Prefecture on Honshu Island and Tokushima Prefecture on Shikoku Island, is an area famous for its whirlpools! In this special terrain, both the low tide and the high tide occur simultaneously, making large whirlpools develop due to the difference in sea height. Although there are lots of places to take magnificent photographs of the whirlpools, the Uzu-no-Michi observatory, with its glass floors, is highly recommended. The dynamic movement of the waves, alongside the great roar, is so powerful that you will no doubt be taken aback.

The term "udatsu” refers to firewalls that are installed between houses. They were considered a symbol of wealth during the Edo era (1603-1868) due to the high cost it takes to make them. They have almost completely disappeared from modern-day Japan, making it nice to be able to see this townscape, which includes many udatsu intact just as it would have been in those times.

The design of udatsu were originally quite simple and practical, but they became somewhat decorative by the mid-Edo era (17-18th Century). In the town you can see some impressively detailed udatsu designs, and it is quite fun to walk around and take a look at all the different designs of each house.

It feels just like you have gone back in time here! This place will no doubt captivate you even if you don’t have much interest in Japanese history. It appears even more magical after dark when little lights are turned on around the town.

Dogo Hot Spring Main Building is an historical hot spring facility which was built in 1894. It achieved the highest rating of 3 stars by the Michelin Green Guide Japan in 2009. It hasn’t undergone any repair work since the time it was built - thus making it quite a charming historical site to see.

Those who like Japanese anime may find this building familiar. This is because it was actually one of the models for the hot spring which appeared in the film Spirited Away, directed by Hayao Miyazaki.

What is amazing is that you can still actually bathe at this historical facility. It is a true wonder to be able to see the traditional architecture from the inside, too. Bathing fees include a yukata (robe) rental, rice crackers, and tea.

Matsuyama Castle is a castle located at the very peak of Mt. Katsuyama in the heart of Matsuyama City. The tenshukaku (castle tower) at the main altar is one of only 12 remaining tenshukaku in Japan. The tenshukaku is located inside of the castle among numerous buildings, and is where the Lord of the Castle would show off his authority and give orders. It is therefore usefully the most beautiful building of a castle. 21 buildings of Matsuyama Castle, including the tenshukaku, have been designated as National Important Cultural Properties. There is so much to see at the huge site of the castle! It is great just to walk around and photograph the beautiful views as you go.

As Matsuyama Castle is located on top of a small mountain, the scenery from the castle tower is truly magnificent. The cityscape of Matsuyama City, and (weather permitting) the sea and the mountains can all be seen from the castle tower. Viewing this magnificent scenery from this superb location will no doubt put you in a graceful mood and make you feel like a feudal lord!

The Setouchi Shimanami Kaido is an extremely long collection of bridges that connects Onomichi, Hiroshima Prefecture (Honshu Island) to Imabari City in Ehime Prefecture (Shikoku Island). The scenic landscape of islands dotted in the Seto Inland Sea is very popular among tourists from both Japan and abroad. Kurushima Kaikyo Bridge is one section of the Setouchi Shimanami Kaido, the part which connects Oshima Island to Imabari City.

Shimanami Kaido was the first suspension bridge in the world to have 3 linked sections. Pedestrians and bicycles are also allowed on the bridge alongside cars. As the sidewalk / bicycle path is quite spacious, it is possible to cross at your own pace, stopping to take photographs of the beautiful scenery whenever your heart desires.

The bridge is illuminated at irregular interval, and the number of times it is lit up depends on the month. During July, August, and October, it is predominately always lit up on Saturdays and Sundays. The schedule can be seen online, so please check in advance if you wish to take a photograph of the beautifully illuminated suspension bridge. Mt. Shiude is a small mountain (352m) on the far western edge of Kagawa Prefecture. It is possible to look out to the islands in the Seto Inland Sea from an observatory at its peak. It is very easy to forget the time here, as the grand scenery changes every hour.

Mt. Shiude is also famous for its cherry blossoms, as around 1,000 cherry blossom trees turn the mountain pink each spring. It is a scene that can take your breath away when combined with the beautiful blue of the Seto Inland Sea. Outside of the cherry blossom season, the mountain is also beautifully filled with hydrangea flowers at the beginning of summer, and camellia’s in winter. The mountain looks different with every season!

While it is of course nice to visit on a good, clear day to enjoy the scenery, days when Mt. Shiude is shrouded in fog are also highly recommended! During this time, the sea is covered in fog which appears like a cloud. It makes you feel like you are viewing the spectacle from far above the clouds. It really is something special to capture this magical scene in a photograph.

Art pieces are dotted all over Naoshima Island, which is situated in northern Kagawa Prefecture. It is almost as if the island itself is an art museum! Art from architects and artists who are active worldwide, such as Yayoi Kusama and Tadao Ando, can be seen here.

The island doesn’t only contain large art pieces. It is overflowing with smaller art pieces too, some in everyday places such as the walls of a house or on top of a trash can. Some pieces are so cute that you cannot help but smile, and some are so impressive that you are taken aback. Become an explorer and search for them all yourself!

Although Naoshima Island is very popular among tourists, there are also a total of 3,000 residents living on the island as of 2015. Most have lived there a long time, so you can also enjoy taking a look at the traditional townscape. There is a small island right at the top of Takamatsu City in Kagawa Prefecture called “Megijima Island,” and a cave called “Onigashima Cave” is located in the middle of this island. Japanese folk stories and myths suggest that an oni (a demon with horns on his head, a mouth which is torn sideways and sharp fangs) once lived here. It is believed that this mystical cave was made around 100 B.C., but it is unknown as to why and how.

Inside the dimly-lit cave stand lots of statues and tiles depicting demons. The demons appear suddenly and will probably shock you at first, but upon further inspection, you will no doubt chuckle over their somehow humorous expressions. Onigashima Cave was discovered around 100 years ago. As it is the kind of cave that a demon might be expected to live in, Megijima Island itself soon became known as “Onigashima” (Ogre Island). Statues of demons can be seen not only inside the cave itself, but also dotted around the island. Going around the island on foot is only about 12km. Count all the demons you find as you go!

The southernmost point of Shikoku is known as Cape Ashizuri, and is an area which has managed to achieve 2 stars in the Michelin Green Guide Japan. A wide-angle lens would be perfect for capturing the beautiful scenery here, where nothing is around to obstruct the view of the horizon. The sunrise and sunset are particularly beautiful! There is so much to see at Cape Ashizuri, such as the lighthouse, temples, shrines, and even a cave! Due to the rocks, some parts of the cape are harder to walk around than others, so please watch your step as you sightsee. With the nearest station being 2 hours away by bus, this isn’t the easiest of places to get to. But it is purely because it is so hard to get to as to why there is an abundance of hardly-touched nature. The transparency of the sea is something that cannot be missed! The color is so beautiful that it is almost like a tropical beach resort!

If you want take a peek into the life of a local Kochi citizen, then Hirome Market is the place to go! This vibrant market is full of restaurants, souvenir stores, and more! Both tourists and locals mix and chat when they come to this market.

The food is deliciously lined-up in front of the stores, making for a fantastic photograph opportunity! The prices are also very reasonable, allowing visitors to try a wide variety of foods without having to worry about their budget.

One of the specialties of Kochi is seared bonito (a type of fish). There is a shop inside Hirome Market called, “Myojinmaru”, where customers can see bonito grilled for them in front of their very eyes. The flames of the grill are so energetic though, that it is sometimes more like a magic show! Don’t forget to take a photograph while they are preparing your food!

The Monet’s Garden at Kitagawa Village was modelled on a garden in Giverny, France. Coming here feels as though you really have wandered into the romantic world of a Monet painting, full of seasonal flowers.

The garden itself is separated into 3 areas - "The Garden of Light”, “The Garden of Water”, and “The Garden of Flowers”. Each area has a different theme with different flowers and plants. There is also a cafe inside the garden, allowing visitors to take a break for a bite to eat or a coffee.

Shikoku surely does have an abundance of charming places. In order to travel the island effectively, it is important to know the great photo spots in advance, to ensure that you can capture the beautiful and unique Shikoku scenery! Use this list as a reference to make your trip special and memorable.