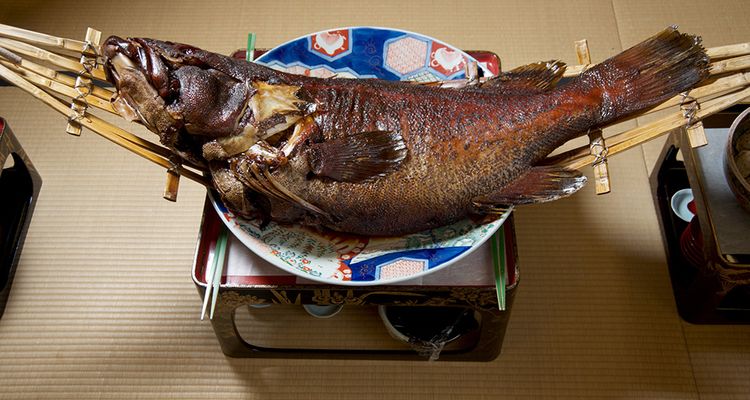 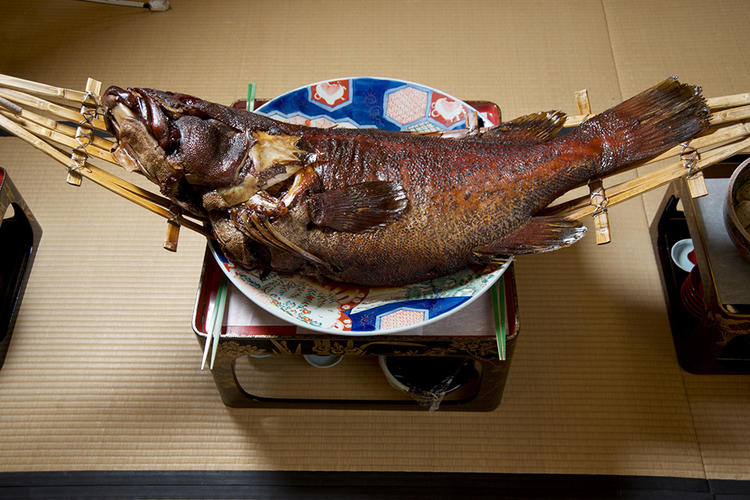 Sugatani Perch: A Dish That Shows the Pride of the Castle Town Merchants in Karatsu

"Enya, enya! Yoisa, yoisa!" Every year in November, giant festival floats are paraded through the former castle town of Karatsu to the sound of these cheers by the float-bearers. Included in 2016 on the UNESCO Intangible Cultural Heritage list in the "Yama, Hoko, Yatai Float Festivals in Japan" listing, Karatsu Kunchi is known as a festival that demonstrates the spirit of Karatsu's men. Women of the town serve their home-cooked festival food as a way to show their thanks to the people who support their family. This cuisine is an indispensable part of this former castle town's lively festival period.

Karatsu Kunchi is a major autumn festival held by Karatsu Shrine, located in the Minamijonai area of Karatsu City in Saga Prefecture. Around 500,000 people come to see the festival, which starts on November 2nd with the Yoiyama parade, and continues with the Otabisho-Shinko on the 3rd, and the Yokujitsusai on the 4th.

This is the biggest event in Karatsu, and the locals eagerly look forward to it each year before winter falls. The word "kunchi" can be written in Japanese as "ninth day" or "day of offering," words which in Japanese are imbued with a sense of gratitude for the fall harvest. The word kunchi is mainly used in northern Kushu, and is also used in the name of other major festivals, including the famous Nagasaki Kunchi festival.

The Karatsu Kunchi Hikiyama Event was designated as an Important Intangible Folk Cultural Property in 1980.

Giant Floats, Created as a Symbol of the Townspeople's Piety, Parade Through The Town

The climax of the Karatsu Kunchi is a parade where float bearers carry the hikiyama floats on November 3rd, and their entry and exit from the otabisho, a temporary shrine where the portable shrine is lodged during the festival.

The Karatsu Shrine's autumn festival has been held since ancient times in Karatsu, which developed as a merchant town around Karatsu Castle. According to Shuzo Maekawa and Matsuo Uchida of the Karatsu Hikiyama Management Committee, the Karatsu Kunchi Shinto festival was first held in 1663.

Its current format came about in 1819 when the Katanamachi area created the Red Lion hikiyama in dedication to the Karatsu Shrine. The Red Lion is the oldest remaining hikiyama float. Over the following 57 years, a total of 15 floats were created, mainly by the major shops in the Karatsu areas of Zaimokumachi, Uoyamachi, and Komeyamachi. Unfortunately, one float has since been lost.

Created from lacquered paper and decorated with gold and silver ornamentation, these floats are a gorgeous sight. Designed by each town, the floats, which can be over 6.5 meters tall and 3 tonnes in weight, are given names like the Drunken Ogre and Minamoto Yorimitsu's Helmet, which was created by Komeyamachi, and the Tiger-Headed Orca created by Kakomachi.

Built over 200 years ago, these floats are carefully restored from generation to generation to preserve their vivid colors. Many hikiyama take over 400 men to pull, which makes for an impressive sight for those watching on.

The Red Lion of Katanamachi, dedicated to the shrine in 1819, and the Second Blue Lion hikiyama, dedicated in 1824.

For Two Days Only, Townswomen Treat Guests to Their Home Cooking

The women take the stage in their homes for the Karatsu Kunchi. As the men run wild during the festival events, women of the town serve large dishes of festival cuisine. In an unusual custom not seen in other areas, townswomen thank the people who support their families by inviting them for a home-cooked meal. On the 3rd and 4th of November, households invite people like relatives, business contacts, and other special guests. In fact, some families can invite as many as 300 people! Relatives may be called in to help prepare, and many women work without rest in the days leading up to the festival.

"Our wives outclass us in this," Maekawa and Uchida say with a wry grin. While there are no set dishes, after the Second World War a custom was born from the major shops in the area to serve large perch, which can be up to a meter in length, prepared sugatani style. To make this dish, high-grade perch caught in the Genkai Sea are stuffed with daikon radish and boiled eggs, and then simmered carefully in soy sauce, sake, and sugar for a whole day.

Custom dictates that if you are invited to one of these meals you should bring a thank-you gift like a bottle of sake, and not overstay your welcome. Since families will only invite people like acquaintances or business contacts, Maekawa and Uchida suggest you do your best to make some contacts in Karatsu if you're looking for an invite!

Merchants Show Pride in the Size and Cooking of Their Perch

As part of the Okochi family's hospitality, fifth-generation proprietor of Ryokan Yoyokaku, Masayasu Okochi, prepares close to 30 kilos of perch to be served for guests in the banquet hall on the 3rd and 4th of November.

"The sugatani perch is a special dish prepared here for the festival period," Mr. Okochi says. "We do our best to source the largest perch we can, and simmer them by slowly adding liquid so that they keep their shape. When half of the fish has been eaten on the 3rd, we decorate it with radish cooked in the stock and shaped to resemble fish scales. Since we show our hospitality through the size and presentation of the fish, you could say that this is a food culture that has been born from the pride of Karatsu's merchants."

Fifth-generation proprietor of Ryokan Yoyokaku, Masayasu Okochi. "The town revolves around the Karatsu Kunchi. While the festival is grounded in entertaining guests with each household's cuisine, I do think the custom is hard on women."

The 14 hikiyama floats used in the parade are displayed under one roof alongside detailed information about each town's float, including the names and the periods they were made. Visitors can also watch a video that documents the three days of the festival.