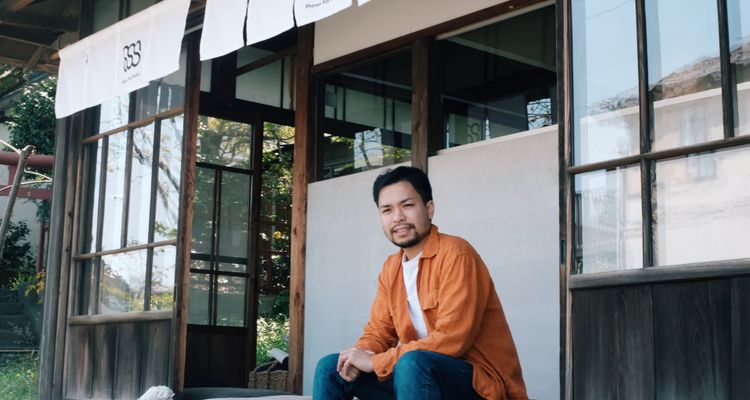 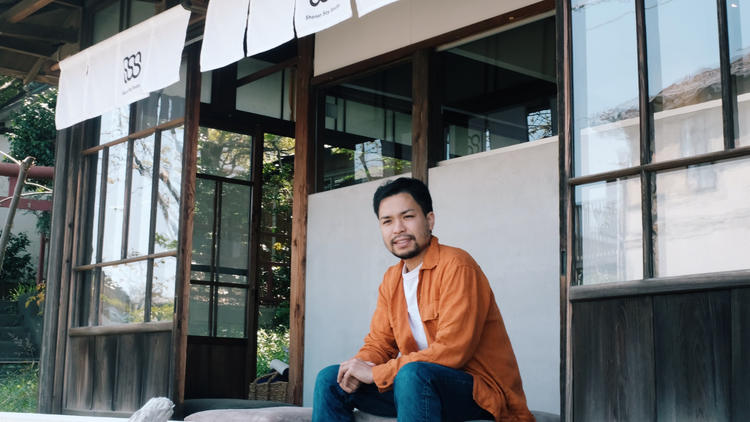 The best way to learn about a country is by getting to know the locals. With our interview series “People of Japan,” we’ll bring you even closer to Japan by introducing business owners, cultural ambassadors, and all-round amazing people bonded by strong passions. In this segment, we spoke with Keita Onooka, who is striving to reinvent “natto,” a traditional Japanese food made from fermented soybeans known for its notoriously strong smell and slimy texture. Through the innovative combination of natto and coffee at Shonan Soy Studio, he hopes to make this peculiar superfood more accessible to the world!

Despite a week of rain and chilly temperatures, the weather granted our wishes and cleared up as we headed for the beautiful coastal town of Oiso, Kanagawa Prefecture, under a sunny spring sky.

After getting off the bus, we made our way to the white sign spelling out “Shonan Soy Studio.” This combined natto factory and showroom is housed in a traditional Japanese building straight out of a film, with the beautiful white outer walls and chic curtain hanging at the entrance giving off a dignified air. We sat upon floor cushions in the traditional “engawa” corridor, enjoying the gentle breeze against our cheeks.

“I think it’s best if you try these before we begin,” Keita said while placing a glass jug in front of us. Inside was a layer of natto sandwiched between fresh cream on top and sesame mousse on the bottom. Taking a hesitant bite, we were amazed to find the pungent smell of natto was replaced by an elegant coffee fragrance, yielding a mild taste pairing wonderfully with the cream and mousse.

“Bringing new life to natto” – behind this seemingly simple sentence is the fruition of countless ideas and hard work, breaking pre-existing barriers with the hope of changing the world.

Everything kicked off for Keita when his family began hosting foreign students in high school. One student from California was younger than him, but was able to debate politics and economics with opinions seemingly beyond their years. This amazed Keita, who became curious about the differences in education. He ended up studying abroad in the United States during university, allowing an experience of the outside world. He continued to explore the globe, backpacking through over 30 countries across Europe, Asia, and Africa. These experiences made him want to break barriers, walking along a path that diverged from the “norm.”

Backpacking made Keita realize that lots of people enjoy Japanese foods such as tofu, soy milk, and edamame, but not necessarily in the same way Japanese people are used to. His international experiences planted the seeds of a new dream: to brand traditional Japanese foods that may be unknown to non-Japanese people and spread them throughout the world.

He saw firsthand the disparities between humans while traveling through developing countries. In Japan, people can go where they want, eat what they like, and are able to chase their dreams. However, many countries are far more restrictive, and Keita longed to close the gaps caused by birthplace and environment.

Utilizing a Wealth of Experience

Keita’s optimistic and adventurous spirit helped him work towards his goals. He started off by partnering with an American friend to create a Youtube channel dedicated to teaching English to Japanese people, and even created his own textbook. From there, he tried his hand at clothing production, working with an experienced tailor friend to create shirts from eco-friendly materials like hemp and recycled plastic bottles. Through these projects, Keita was able to convey his own principles and ideologies, and although they did not come to fruition, they helped fan the flames of his ambition.

After slowing down for a bit, Keita went back to square one, returning to Japan and entering a large-scale, foreign-owned chemical manufacturer. While growing and learning at his workplace, he began his plan to start a new business by age 30.

During this time, he recalled the types of diets popular while studying in the United States, which included vegetarian and organic cuisine. Around two of his weekly 14 meals were vegetarian, and he realized that such meals were more easily digested and absorbed, making his body feel lighter. While considering all the healthy Japanese foods available, his attention focused on natto: a nutritional traditional Japanese food rich in soy protein. However, the strong smell stood as a tough barrier when trying to get his non-Japanese friends to eat it. Complaining that it smelled like three-day-old socks, they simply couldn’t enjoy it.

Keita began experimenting after work to search for ways of eliminating natto’s smell. While lacking experience in food manufacturing, he utilized his knowledge in the similar field of chemical manufacturing to aid in his mission.

“I believe that the know-how I gained from my experiences came in handy, and I could apply it in similar fields,” Keita explained. He experimented with rehydrating dried soybeans and simmering them, along with a multitude of different ingredients like green tea and water with basil and lemongrass. He finally came to the conclusion that coffee was the best way to get rid of the odor, as coffee doesn’t harm the intrinsic nutritional value of natto.

With this, at age 28, he set up Shonan Soy Studio, a food production facility focusing on natto. Here, “SOYFFEE,” a fermented soy product that tastes like coffee, was born.

SOYFFEE - A Beautiful Blend of Natto and Coffee

Although SOYFFEE appears like regular large natto beans, we were astonished to find that it had no trace of natto’s signature pungency. Instead, a deep whiff revealed a lovely coffee aroma. However, it still has the same consistency as natto, so those who do not fare well with “slimy” foods may want to steer clear.

You can enjoy SOYFFEE however you like – with toast, desserts, or even salads. It is a great addition to any breakfast or snack, containing plenty of the protein often difficult to consume during the day. It pairs surprisingly well with sweet flavors, and is heavenly with honey or cream.

Keita makes the most out of his various experiences and knowledge, channeling them into new ideas. In April 2022, he developed a natto powder seasoning and opened SOY BREWERY – a takeout-only shop specializing in fermented foods using natto powder and soy beans. SOY BREWERY is located in Chigasaki, only two stops away from Oiso in the Shonan area.

As mentioned, Keita’s main profession is working at a foreign-owned chemical manufacturer. Although many would find it difficult to conduct even one side business while working, Keita, who loves camping, has taken it upon himself to branch out further into running a hotel. “Since I visit the area a lot, I wanted to create a place I could stay whenever I was there,” said Keita when explaining his motivations to open his hotel. Called “norm.,” it is an exclusive-use hotel centered around the themes of “art” and “chill,” located on the bank of Lake Kawaguchiko in Yamanashi Prefecture.

Keita is the type of person to delve deep into his interests, taking action to turn them into businesses. The hotel is just one example of his unique way of life.

The gallery-like space changes periodically, with themes made in collaboration with all kinds of artists. Moreover, in order to give guests the most comfortable and relaxing experience, only a single group is allowed to reserve the hotel each day.

One would assume that Keita is extremely busy with all these side endeavors. Even so, being able to transform your hobbies into “parallel careers” would be enviable to many modern workers, and although juggling so many projects is no easy feat, Keita is fortunate enough to have the support of his friends and family. From natto production to hotel management, “I leave certain tasks to the pros,” Keita told us. Thanks to this, he is able to handle several projects at once.

The Path Built With Passion Leads to the Future

Keita wears multiple hats – he is a natto producer, art hotel owner, and regular office worker. It is safe to assume that reaching this status must have required plenty of hard work, and we wanted to know if he had ever experienced any setbacks.

“There were times when I felt like I was going through the motions,” Keita replied. Although he appears successful from an outsider’s perspective, he was working with nothing but his passion, endeavoring towards his goal of creating a future without disparities between people. This is what brought about the “Bite for Bite” spirit of Shonan Soy Studio, using part of the proceeds from sales to buy soybeans to donate to Laos.

Keita revealed to us the hardships he witnessed when visiting a farming village in Laos, one of the poorest countries in Southeast Asia. There, most people can only afford to eat meat once a week, with most children growing up with protein deficiencies and having to sacrifice what may seem commonplace to us, such as education. Even in such an environment, the Buddhist faith remains strong, and villagers will offer rice to traveling monks, giving the rest to needy children. This deep sense of community greatly moved Keita, who became even more grateful for everything he had in his life.

Unfortunately, Keita has not been able to return to Laos for two years due to coronavirus, and has instead turned his attention to the gradually growing wealth gap in Japan. He now offers soybeans to “children’s cafeterias” (facilities providing meals for children from low-income families) in the Shonan area, aiding less fortunate local children. He plans to continue working with children’s cafeterias in the future, but also hopes to make a return to Laos when the global situation calms down.

Treasuring the Soybean – A Legume of Potential

Changing the world may be an ambitious dream, but it is not impossible if one stands up and takes action. Keita was likely the first person ever to think of combining natto and coffee to create a delicious new product, and he is now using his innovative spirit to contribute to the creation of a better society. We’re excited to think about how many people will get the chance to try delicious natto coffee upon visiting Japan, and look forward to Keita’s forthcoming projects!