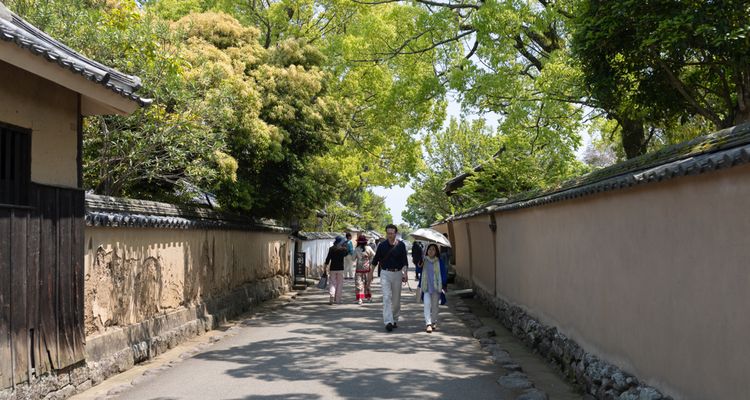 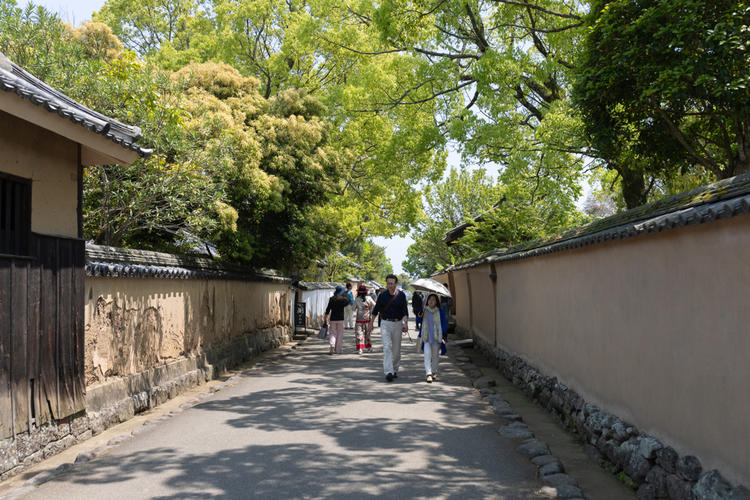 Renowned for being the hot spring capital of Japan, Oita Prefecture, located in the northeastern part of Kyushu, boasts an abundance of famous hot springs, and visitors from all over the world flock to stay in popular hot spring towns such as Beppu and Yufuin. Oita is also blessed with mountains and a coastline, which offer incredible sights and delicious bounties from the land and sea. The prefecture is also home to many picturesque old towns. For three days and two nights, we’ll take you through this delightful corner of Kyushu! We’ll travel back in time in the “Little Kyoto of Kyushu” Mameda in Hita, ride a bicycle along the Yabakei River in Nakatsu, take long, hot baths in Beppu's hot springs, and experience the old charms of Kitsuki Castle Town.

Home to the Oldest Stone Wall in Kyushu: Nakatsu Castle

Nakatsu, the hometown of Yukichi Fukuzawa—the face on the Japanese 10,000 yen banknote—is where we’ll start the second day of this journey.

Nakatsu Castle, which sits at the mouth of the Nakatsu River, was built by the well-known military commander Kuroda Kanbei during the Sengoku Period (1467-1615). It is known as one of the three mizujiro (castles on the sea), alongside Takamatsu Castle in Kagawa Prefecture and Imabari Castle in Ehime Prefecture. The structure was built in a triangular shape resembling an open fan, which is also why it is sometimes referred to as the “Fan Castle.” The castle wall is what remains from the original construction, and it is regarded as the oldest stone wall in Kyushu.

The castle tower was reconstructed in 1964. Today, it is used as the Okudaira Clan Historical Museum, housing many precious documents and family treasures. Well worth a visit for the Japanese history buffs out there!

Cycle Along the Yabakei Gorge

If you’re visiting Nakatsu in the fall season, rent a bicycle and ride along the Yabakei Gorge to immerse yourself in the beauty of nature. Named as one of the new Top Three Views of Japan, a National Scenic Spot, and a Japan Heritage Site, Yabakei Gorge has stretches of interesting rock formations that were formed over thousands of years and valleys with pristine water flowing through. Visitors from all over the country come to admire the cherry blossoms in spring, the lush greenery in summer, and the fiery autumn foliage that paint the mountains red in fall. In fact, Yabakei Gorge is actually one of the top three spots in Japan to view autumn leaves, alongside Arashiyama in Kyoto and Nikko in Tochigi!

In 1982, the 36-kilometer-long Maple Yabakei Cycling Road was built over an abandoned railway track to create a cycling path. There are several sightseeing spots along the way, spectacular views of tranquil paddy fields, and gentle slopes and no sharp turns for easy riding, attracting many cyclists and tourists. A leisurely ride takes about 3 hours and 40 minutes.

*Although the Maple Yabakei Cycling Road is a bicycle-only path, there are still some sections with motor roads along the way, so please pay attention to road safety.

How to get there: Take a bus from the bus stop at the South Exit of Nakatsu Station (left picture) to the Ao-no-Domon bus stop. The ride takes about 30 minutes.

Feel Breathless at the Sea of Blue at Ao no Domon

One of Yabakei Gorge’s must-see sightseeing spots, Ao no Domon is a 342-meter-long tunnel at the foot of the Kyoshu-ho cliffs. It is a historical site designated by Oita Prefecture.

Before the tunnel was built, people had to climb over the cliffs to pass through to the other side. The path was very dangerous and people and horses regularly fell to their deaths. A passing monk named Zenkai decided to dig a tunnel out of pity for the tragic occurrences, and started construction around 1730. Not only did he recruit laborers, he also rolled up his own sleeves to join in with the digging. After over 30 years of excavating the tunnel with only a chisel and mallet, it was finally completed in 1763.

When the tunnel was opened, tolls were levied on passers-by, so it is considered the oldest toll road in Japan. However, now it is just an ordinary road.

The origin of the word “ao” (which means “blue” in Japanese) in Ao no Domon was only actually added recently in 2012, when nemophila flowers were planted around the foothills of the Kyoshuho cliffs. The flowers would bloom from mid-April to early May each year, creating a marvelous sea of sky blue.

Located at the lower section of the Yamakuni River, the 11 undulating peaks of the Kyoshuho cliffs stretch over about 1 kilometer. Its magnificent, vibrant scenery of monolithic rocks changes with the seasons, teeming with life.

Famous author and educator Yukichi Fukuzawa, who had returned to his hometown Nakatsu after being away for 20 years, had heard that Kyoshuho was to be sold. In order to preserve the scenery from potential destruction, he spent three years buying up 13,000 square meters of land anonymously, preserving this beautiful corner of nature for generations to come.

Built in 1923, Yabakei Bridge dates back nearly 100 years. Its eight consecutive arches are its most distinguished feature, and at 116 meters long, it is regarded as the longest stone arch bridge in Japan.

In winter, a dusting of snow on the bridge transforms it into a scene out of a fairytale, like a layer of sweet icing on a dessert, making its local nickname “Dutch Bridge” rather apt.

Time seems to slow down as you wander along the banks of the Yamakuni River, watching it run by in endless motion. Yabakei Bridge has been designated as an Important Prefectural Tangible Cultural Property, and it is undoubtedly a popular tourist attraction, connecting visitors to Nakatsu City and the Yabakei area.

Nakatsu is also considered to be the “holy land” of fried chicken, since this is reportedly where Japanese-style fried chicken originated. A visit to Nakatsu isn’t complete if you don’t give this local delicacy a try!

From the outside, Murakami Shokudo looks like an inconspicuous low-rise building, but it is in fact an immensely popular fried chicken specialty restaurant. The only thing it serves, apart from drinks and rice, is fried chicken. There are still plenty of diners visiting even at the post-lunch hour of 2 pm. It is located at a very convenient spot - only a 2-minute walk from the Ao no Domon parking lot.

We recommend getting the Karaage Set. After being sufficiently marinated in soy sauce, the chicken is freshly fried with garlic and spicy seasoning, and comes out with just the right amount of saltiness and juiciness. The skin - crispy yet not too greasy - is the perfect complement to a steaming bowl of fluffy Japanese rice. You’ll surely be clearing your lunch out in no time!

While you're there, you also might notice how the fryer never stops frying, a testament to this place's popularity.

About a 5-minute walk from Ao no Domon, farm-to-table restaurant Domon Patio offers an all-you-can-eat buffet of fresh vegetables directly delivered from local farms, and also sells a variety of fresh fruits and vegetables as well as local crafts. Pay a visit to try the local Yabakei Milk.

Yabakei Milk (left in the picture) is produced by just five farms associated with the local dairy farming union. It has gained popularity for its rich and sweet flavor as it uses 100% fresh milk. The secret to preserving its excellent freshness is that the milk is packaged and transported on the same day it is collected. Due to its small production volume, one would be hard-pressed to find these little blue boxes of milk in places other than local farming cooperatives. Furthermore, they are often sold out in a day, leading to their nickname “Phantom Milk.” It is said that since it is so fresh and that no additives are used, the flavor of the milk changes depending on the season: slightly more refreshing in spring and summer, while relatively creamier in autumn and winter.

The café au lait flavor (right in the picture) uses 50% fresh milk, which complements the rich coffee superbly. This is the perfect drink to pick up on your way back from a long day of cycling around Nakatsu.

Stay Overnight at an Onsen Village at Ebisuya Ryokan

To truly experience what makes Oita the "onsen capital" of Japan, a visit to one of Beppu's hot spring ryokan is a must. Beppu City has designated eight hot spring areas (Hamawaki, Beppu, Kamegawa, Kannawa, Kankaiji, Horita, Shibaseki, Myoban) as "Beppu Hatto" according to the mineral content of the water and landscape.

Nestled in the valleys of Myoban, Ebisuya Ryokan is a highly recommended hotel for a night in Beppu.

There are two types of hot springs that Ebisuya draws its bath waters from. The opaque, bluish-white sulfur springs are known to be good for promoting blood flow, lowering blood pressure, and improving the skin. One can drink it as well as bathe in it! On the other hand, the transparent, colorless spring is slightly alkaline and has positive effects on healing muscle pain, helping with fatigue, and for improving the skin. It is said to be particularly beneficial for women.

There are a plethora of options for a relaxing time - spacious public open-air baths, private open-air baths for small groups or families, indoor baths, a hot stone spa, a relaxation area overlooking Beppu Bay, and even a cafe!

If you do stay here, you must not miss their Jigoku dinner prepared meticulously by the landlady. Fresh vegetables, potatoes, lotus root, ginkgo, glutinous rice dumplings, shumai, meat such as chicken, pork, or fish are put in a large 30-cm-wide steamer, and the whole thing is placed in a jigokugama (a type of steaming oven) which uses high temperature steam from the natural hot spring to cook everything in 10 to 15 minutes.

The steamer full of food is served immediately as soon as it comes out of the jigokugama. Taste the freshness of the ingredients, or dip it in some sauce to bring out the flavors or add some excitement to your meal. A simple yet refreshing way to eat this is to add a little freshly squeezed kabosu (a type of citrus fruit cultivated in Oita) juice into your soy sauce, further enhancing the unforgettable dining experience.

DAY 3: Delicious Pudding in Beppu and Wearing Kimono in Kitsuki