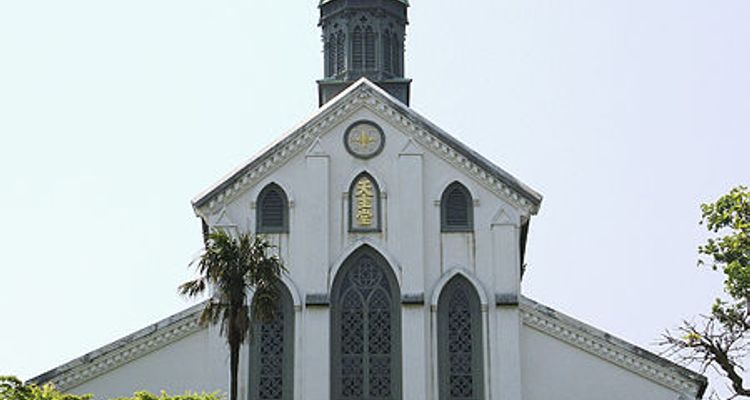 Nagasaki: The Catholic "Rome of Japan"

You've definitely heard of Nagasaki, but did you know Nagasaki was meant to be the hub of Catholicism in the Far East? The city is full of religious history and even has its own saint.

Nagasaki might be best known as the second site of the atomic bombing in WWII and also as one of the main cities in Kyushu. Today, there are several points of interest in the city for tourists, including Dejima, Hashima and the Sofukuji Temple, among others.

But did you know that the city was actually founded by Portuguese Catholics and was meant to be the main site of Catholicism in the Far East? Alongside the tourist attractions are also attractions for those interested in religious history or those who are Catholic. This is not only because of Nagasaki's founding as a Catholic city but also because of the historical persecution of Catholics in Japan.

The Roman Catholic Church in Japan is part of the worldwide Roman Catholic Church, under the spiritual leadership of the Pope in Rome. There are approximately 509,000 Catholics in Japan—just under 0.5% of the total population.[1] There are 16 dioceses, including three archdioceses[2] with 1589 priests and 848 parishes in the country.[1] The bishops of the dioceses form the Catholic Bishops' Conference of Japan, the episcopal conference of the nation.

Catholicism, as well as Christianity in general, was introduced to Japan by Portuguese explorers and missionaries, particularly by the Jesuits, such as St. Francis Xavier (who was, however, a Spaniard). Portuguese Catholics also founded the city of Nagasaki, considered at its founding to be the most important Christian center in the Far East, though this distinction is now obsolete. In addition, a large number of Japanese Catholics are ethnic Japanese from Brazil. At one point, Nagasaki was known as "the Rome of Japan" for the significant number of residents who were practicing Christians. However, the peak of Catholic history in Nagasaki is perhaps the crucifixtion of 26 Christians in 1596.

Each had part of his left ear cut off before the forced march to Nagasaki, a distance of about five hundred miles taking thirty days, all in the midst of winter. In Nagasaki they were tied to crosses with their necks held in place by iron rings. As they awaited death, the singing of psalms broke out from the twenty-six.

Among the 26 was Paul Miki, a Jesuit priest who later achieved sainthood. February 6, the day after this crucifixion, is now his feast day.

The Japanese government used Fumie to reveal practicing Catholics and sympathizers. Fumie were pictures of the Virgin Mary and Christ. Government officials made everybody trample on these pictures. People reluctant to step on the pictures were identified as Catholics and then sent to Nagasaki. The policy of the Japanese government (Edo) was to turn them from their faith. If the Catholics refused to change their religion, they were tortured. Many of them still refusing to abandon their faith were executed on Nagasaki's Mount Unzen.

Several sects of "hidden Christians" were also based in islands off Nagasaki.

The Hand of St. Francis Xavier Francis Xavier, SJ, born Francisco de Jasso y Azpilicueta (7 April 1506 – 3 December 1552), was a Roman Catholic missionary born in Xavier,Kingdom of Navarre (now part of Spain), and co-founder of the Society of Jesus. He was a study companion of St. Ignatius of Loyola and one of the first seven Jesuits who took vows of poverty and chastity at Montmartre, (Paris) in 1534.[1] He led an extensive mission into Asia, mainly in the Portuguese Empire of the time. He was influential in evangelization work most notably in India. He also ventured into Japan, Borneo, the Maluku Islands, and other areas which had, until then, not been visited by Christian missionaries. In these areas, being a pioneer and struggling to learn the local languages in the face of opposition, he had less success than he had enjoyed in India. It was a goal of Xavier to extend his missionary preaching to China but he died in Shangchuan Island shortly before doing so.

Upon St. Francis Xavier's death, several of his body parts were taken from him, and are now historical and religious relics in areas where he did his missionary work. While most of these relics are in India, where St. Francis Xavier did most of his work, there is also reportedly a hand in Rome and a hand in Nagasaki, though whether the hand's permanent residence is Nagasaki or if it is passed around to different parts of the world as a religious artifact is unknown.

Memorial to the Martyrdom of the 26 Saints of Japan In 1962, in commemoration of the centennial of the Martyrdom of the 26 Saints of Japan that occurred on Nishizaka hill, the Memorial Relief of the Martyrdom of the 26 Saints of Japan was constructed concurrently with the adjoining Saint Filippo Nishizaka Church. The Memorial Hall that stands quietly behind the life-sized bronze statues of the 26 saints is divided into two themes - things handed down from Christian times and things created today in order to clarify history. It introduces the history of Christianity from the time of Saint Frances Xavier's visit until the Meiji period. Exhibitions include a letter by the priest Nakaura Julien from the Tenshou youth facility, letters addressed to Portugal's King John III from Saint Francis Xavier, the record of the battle of Shimabara, the Maria Kannon sculpture, and a bronze Pieta from the 16th century, as well as frescoes and Japanese paintings. 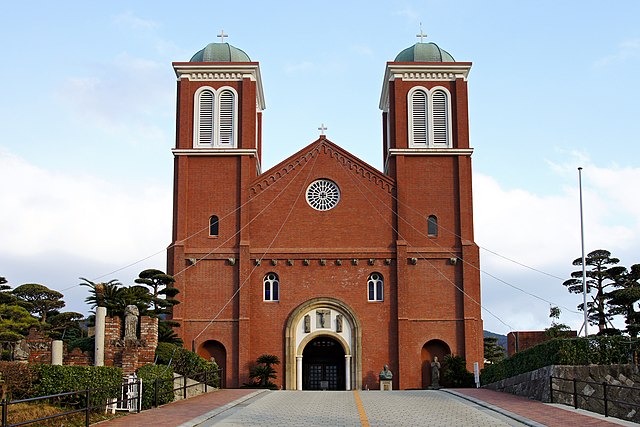 St. Marys Cathedral, often known as Urakami Cathedral, was constructed after a long-standing ban on Christianity was lifted in 1873. In 1925, the main Cathedral and the belfry dome were completed after 30 years of work by Urakami Christians. The brick Romanesque building was the largest Catholic church in East Asia until the atomic bomb that fell on Nagasaki in 1945 completely destroyed it, along with 8,500 Christians. A replacement was built in 1959 in the same Romanesque style. Along the approach to the Cathedral, there are atomic bomb-exposed angel statues. The Cathedral's stained-glass windows, which feature the image of Christ, are lit up at night.' Hirado Island in Nagasaki Prefecture is home to some interesting Christian churches dating back one hundred years or so. Probably the most-photographed is the St. Francis Xavier Memorial Church in the town of Hirado itself.

Sitting atop a hill overlooking the small town and its harbor, the church was originally named the Hirado Catholic Church, but was renamed following the placing of a statue of St. Xavier in the grounds.

One of the sites of the town is "the view of temples and church" which can be had halfway up the lane leading up the hill.

The church was originally built on a different site in 1913, but was reconstructed at its present location in 1931.