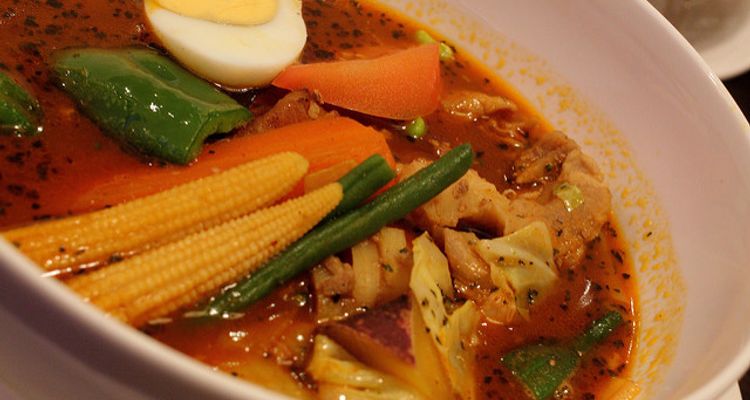 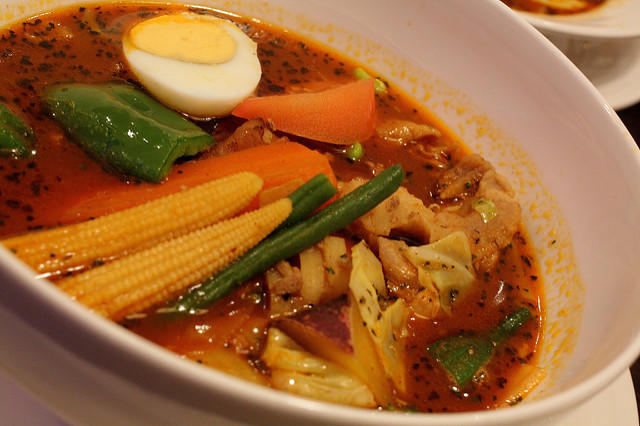 Culinary culture of Hokkaido is one of a kind. Historically cuisines of the indigenous Ainu people and those of the settlers from the mainland merged and have evolved ever since. Some of the dishes have a twist of western culture too, such as adding butter to a Japanese recipe. Here we have picked 12 dishes that are worth a try when you are in Hokkaido. Chan Chan Yaki originated in a fishing village but it is now popular and loved by people throughout Hokkaido. To make this dish, chop vegetables roughly and spread on a large iron griddle. Place roughly sliced salmon over the vegetables and steam-fry. Once cooked, pour sweet miso seasoning sauce and mix well. Add a knob of butter for the final touch. Simply delicious. Selected as one of the top 100 Japanese regional cuisines, Ishikari Nabe started as a fishermen’s meal. Typical Ishikari Nabe is a stew of unsalted salmon chunks with root vegetables such as onions, daikon radish and potatoes, seasoned with miso. Being a famous local cuisine of Tokachi area, this is a bowl of rice topped with slices of pork flavored with soy sauce-based gravy.  It is a simple dish with simple ingredients, yet extremely popular. Today Butadon is cooked at home as well as served at franchised restaurants anywhere in Hokkaido. The key ingredient is gravy. The sweet and savory taste of gravy and the sizzling aroma of pork are a match made in heaven. The recipe for Zangi is similar to Karaage-  they are both deep-fried chickens with coating. It looks like Karaage too.  The difference is in the taste. Standard Zangi has a punchy flavor of soy sauce, garlic and ginger. However, Zangi comes in various flavors nowadays. You will come across the likes of salt-flavored or even a non-seasoned version across Hokkaido. Now isn’t it like a zen riddle? Zangi is, in essence, Karaage! When you hear ‘Yakitori Bento’, you would typically think of a bento box with yakitori (skewered chicken) served on rice. The shocking news is that this ‘yakitori’ is made of pork! This bento box is sold at Hasegawa Store, franchised convenience stores across Hakodate-city and comes in four varieties of flavor: Tare (gravy), Shio (salt), Shio-dare (salty-sauce), and Umakara (Spicy). A notable regional cuisine of Hokkaido with its origin said to be from a Manchurian mutton dish. There are two types of cooking method: one is marinating the meat in a sauce before cooking, whereas the other is dipping cooked meat into the sauce. The latter method seems to be more popular lately but either way you cook it, it’s such a wonderful dish. This is traditionally a popular snack in Hokkaido. Mash boiled potatoes and form into patties with potato starch. Brown both sides with a frying pan and serve with sweet and savory-flavored soy sauce and a knob of butter. Some households cook Imo-mochi with pumpkin or sweet potatoes. There are Imo-mochi with cheese filling too. One of the famous Ekiben (bento sold at railway stations) in Hokkaido, Kani Meshi is a box of rice topped with flaked crabmeat. It was first invented and sold at Oshamambe Station in 1950 by Kanimeshi Honpo Kanaya, a company based in Oshamambe. Today there are various types of Kanimeshi across the country but they are mostly sushi rice with flaked crabmeat on top, which are quite different from the original version by Kanaya. Originally from Nemuro-city, escalope was beef cutlet on spaghetti napolitan, a tomato ketchup-flavored pasta dish, topped with demi-glace sauce. Today you can also find a different type of Escalope dish with cutlet of thinly sliced pork on top of butter rice, finished with, you guessed it, demi-glace sauce. One of the most popular dishes in Hokkaido, soup curry comes in all sorts of variety. Typical soup curry is packed with spice, served with fried vegetable toppings and a cooked chicken thigh. Spices used in soup curry tend to be from Sri Lanka and/or India, which makes it different from ordinary Japanese curry. As the name suggests, this yakitori of chicken organ meat is originally from Bibai-city in Hokkaido. Bibai used to be a coal-mining town. During the mid-1950s a local eatery invented this dish, making it an instant hit among the miners. Bibai Yakitori comes with a skewer of various chicken meat and Kinkan, a tiny orange-like fruit. Tomakomai is the No.1 fishery of Hokkigai (surf clams). Locals of Tomakomai-city invented various home cooking recipes using Hokkigai and this curry is one of them. Local restaurants offer numerous dishes including fried Hokkigai and Hokkigai with cooked rice.

Many people link Hokkaido with fresh seafood, but we’ll have you know that it’s not just the seafood that produce delectable and well-diversified local dishes in this northern county!