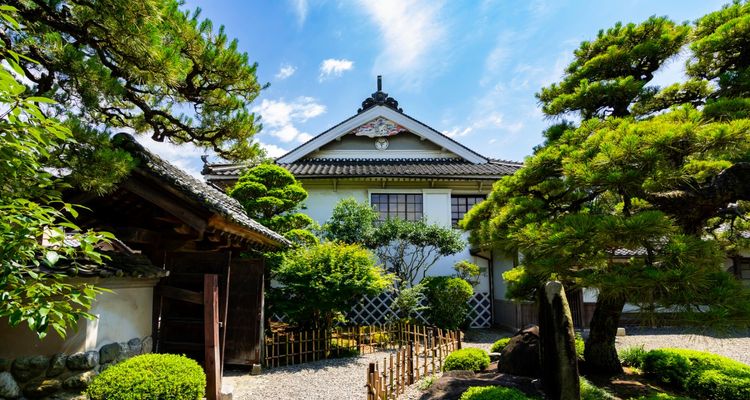 Meiji Mura Museum in Aichi: Get a Glimpse of the Modernization During the Meiji Era!

Meiji Mura Museum is one of the most charming tourist attractions of Aichi Prefecture, with 11 buildings designated as national cultural assets lying within its perimeters. Many historical period dramas and animations have also used the park as reference material for filming or creating animated scenes. It will definitely feel surreal for those taking a tour of this place after watching the related shows! Read on to find out more about this wondrous park.

Located in Inuyama-shi of Aichi Prefecture, the Meiji Mura Museum is a huge open-air museum covering an area of 1 million square meters. It exhibits 67 modern architecture and public facilities that were constructed in the Meiji era across Japan.

Meiji Mura Museum was opened in 1965 during a period of high economic growth in Japan. Architect Yoshiro Taniguchi and president of the Nagoya Railway Company Motoo Tsuchikawa lamented that many valuable Meiji era architecture were rapidly disappearing under the economic-driven society, so they founded the park together to preserve cultural assets that faced threats from development projects. Here are several standouts at the Meiji Mura Museum.

This is the former St. John’s Church from Kyoto, one of the earliest buildings that were relocated to the Meiji Mura Museum when it first opened. The architectural style is fundamentally Romanesque, but the pointed arch shape of the windows and doors as well as the curved lattice windows are of Gothic design, leaving even Japanese tourists gasping in awe. Even in Japan, such elegant Western-style old buildings have reduced in quantity over time. Perhaps many Japanese people did not expect to see this gorgeous European church in their home country.

This is the House of Marquis Tsugumichi Saigo, a representative mansion of the “colonial style”. Jyudo (Tsugumichi) Saigo was the younger brother of Takamori Saigo, and active in the Bakumatsu and Meiji era serving as the Army and Navy Minister. In Segoden (a NHK taiga drama aired in 2018), Ryo Nishikido plays this hero of the Meiji Restoration.

Back to the architecture itself, the key as to why this Western building is labeled as “colonial style” lies in the balcony. Native European building structures did not have balconies, but when the Europeans came to Asia to expand their colonies, the traditional Asian balcony structure was added to Western buildings to meet the local climate and interact with the citizens. This was finally absorbed and applied by the Japanese who were heading towards westernization.

Below are two government buildings with architectural features of the Giyofu (pseudo Western-style) design in the early Meiji period, the Mie Prefectural Office and the Higashi Yamanashi District Office respectively.

Giyofu style refers to the transitional Japanese architectural style before adopting orthodox Western building techniques. These buildings that imitate the Western style were both built by traditional Japanese carpenters, and have a unique spin on them under the influence of “Western and Eastern Fusion” and “Imagination of the West”. Incidentally, Mia Prefectural Office and Higashi Yamanashi District Office were both used as filming locations, and appeared in the Japanese dramas “Saka no Ue no Kumo (Clouds above the Slope)” and “The Emperor’s Cook” respectively.

Opposite to the Mie Prefectural Hall, the imperial carriages of Emperor Meiji and the Empress Shoken are exhibited in the Shimbashi Factory of the Japan Railway Bureau, which is a must-visit for train buffs!

Imperial carriages refer to the special cars used by the Japanese Imperial family. These two compartments are decorated with the Chrysanthemum Seal and the 5-7 Paulownia, which are symbols of the royal family. In addition to these emblems used by the Imperial family, the seal of the Ichijo family is also used on the Empress Shoken’s carriage. Empress Shoken was born into the Ichijo family, which was a branch of the Fujiwara clan, the most powerful noble family in Japanese history. Thus, the Ichijo family seal resembles that of the Fujiwara clan.

This German-style building was a medical research institute established by Shibasaburo Kitasato, the new face of the 1,000-yen banknote. Shibasaburo Kitasato was a pioneer of bacteriology, in which he succeeded in growing the tetanus bacteria with his team when he was studying in Germany, as well as developing serum therapy. Exhibitions related to Kitasato’s research can also be found inside the building. He chose a German architectural style for his research institute due to his experience studying in Germany.

This Japanese-style wooden building below is the Japan Red Cross Society Central Hospital designed by Tokuma Katayama, one of the most significant architects of the Meiji period.

Katayama was recognized for his French-style historical western architecture, especially the buildings he designed for the Imperial family, like Akasaka Palace and the Imperial museums (now known as national museums). But this Red Cross Society Central Hospital that he designed in his early years is very different from his other buildings, as this wooden building preserves a strong Japanese style. The small tower-like structures on the roof are believed to help ventilation.

This Red Cross Society Central Hospital has also appeared in films and television shows, including “Saka no Ue no Kumo” and “Spring Snow”. In addition, the animation “Golden Kamuy” used the building as a reference for drawing scenes in the manga.

The building with a grand dome above is the Uji Yamada Post Office, which was originally located in front of the Ise Shrine. The entire building is centered around a circular hall with two V-shaped wings extending out on the side and copper roofing. The domed roofs of the towers on both sides are in Baroque style, which subtly matches the simple wooden main structure. Such a unique building can probably only be found in Japan. If you have watched the NHK morning drama “Gochisosan”, you will definitely have a strong impression of the scene where this building appeared in the show!

This church was formerly the St. Francis Xavier’s Cathedral of Kyoto. It looks like a simple white medieval church with no fancy decorations on the outside, and can’t seem to compare with the grand St. John’s Church mentioned above. But upon entering, you will discover that the effect produced by the light shining through the stained glass is dazzling! Please be sure to pick a sunny day when visiting this place!

The next building that has a majestic gate like those of a Western castle is the Main Gate of Kanazawa Prison, one of the five major prisons in the Meiji era. It was built by Yamashita Keijiro, an architect who specialized in designing judicial institutions. The “Meiji Five Great Prisons” are all his works.

From the modern aesthetic point of view, it may be difficult to understand why a prison facility would use such a “gorgeous, stylish and highly decorative” architectural style.

In fact, ever since ancient times, architecture has always been a medium for displaying power. Various architectural vocabularies are also a good tool for conveying different ideologies. Although all art forms have this kind of function; it is not so easy to popularize paintings, dramas and other creative arts, and people need to be literate to understand text. Yet for architecture, everyone can pass by a large building and easily see it.

In the Meiji era, the government built a variety of majestic Western-style buildings not only to show the desire of Japan detaching itself from its Asian roots and joining the European powers, but also to display its ruling authority to the people. This was especially true for prisons, which are built for disciplining and education purposes.

The above is some of the cell rooms in the Kanazawa Prison. The original prison building had five rows of cells, which were arranged radially around an octagonal central guardhouse with a watchtower on top. This design could enable guards to effectively manage and monitor the entire prison. After the relocation to Meiji Mura, only the Fifth Ward remains.

Next, let’s introduce the strange remnants below - the Head Office of Kawasaki Bank. Previously located in Nihonbashi of Tokyo, the original building was three stories high and located on high lands, so it was the highest point of the village and could be seen from a long distance away. Climb upstairs for a bird’s eye view of the entire Meiji Mura.

Kawasaki Bank used the neoclassical style that was popular amongst bank buildings at the time. Unfortunately, the bank was demolished and rebuilt in 1986, so only a corner of the building is preserved here. The original bank entrance has instead been incorporated into the facade of the new building at its original location. Strangely enough, the preserved part of this building seems to have a very “postmodern” style to it!

Lastly, let’s introduce the Main Entrance Hall of the Imperial Hotel, which is located in the deepest parts of Meiji Mura and is said to be the greatest treasure of the museum!

This Imperial Hotel was actually built in the second half of the Taisho period, and was designed by the great American architect Frank Lloyd Wright. The architectural style of the Imperial Hotel falls under the modernism category, and the massive building is almost made entirely of parallel and vertical lines. The decorations also use abstract geometric patterns. Apart from the pillars in the pool and the hemispherical structure in front of the main entrance, the façade of the building, the terracotta tiles on the columns and the hollow cement blocks are all carved in continuous complex geometric patterns resembling crowded Maya hieroglyphs. Thus, this style is also known as “Mayan Revival architecture”.

Not only does the Imperial Hotel have an unprecedented exterior, but it is also built with strong earthquake resistance in consideration of the many earthquakes that happen in Japan. The Great Kanto Earthquake occurred just a few days after the hotel was completed, and while most of Tokyo was in ruins, the Imperial Hotel was one of the very few buildings that were only slightly damaged. Having survived earthquakes and airstrikes of the Second World War, the hotel was commandeered by the Allied forces after the war. It was only up until 1967 was it decided to that the hotel would be demolished due to factors such as being old and outdated as well as having a sunken foundation. The hotel is not only a milestone in the history of Japanese architecture, but also one of Wright’s most famous masterpieces. You can see the gorgeous Imperial Hotel in many Japanese dramas, including “Manpuku”, “Half Blue”, “Hanako to Anne” and “Onna no Kunsho”, and even in the MV of singer Kana Nishino.

If walking around the vast park makes you feel tired, Meiji Mura also offers steam engine locomotives and streetcars to get around.

The two antique steam locomotives still in operation were once running from Yokohama to Shinbashi, and between Fuji in Shizuoka Prefecture and Omiya-cho. As for the streetcars, they were part of Kyoto Shiden (City Tram), which was the first electrified railway system in Japan.

In addition to the above exhibitions, Meiji Mura also hosts various events, such as cosplay conventions, escape games and life-size monopoly. In the second half of this year, Meiji Mura will jointly organize a series of activities with the manga “Rurouni Kenshin”. First up, the favorite sword of protagonist Himura Kenshin - the sakabato (reverse-blade sword) forged by the blade smith Kanekuni Ogawa - will be exhibited starting August 1st, which is a must-visit for comic fans!

If you are traveling to Aichi Prefecture, be sure to visit the Meiji Mura Museum to experience the romantic modernization story of the Meiji era.