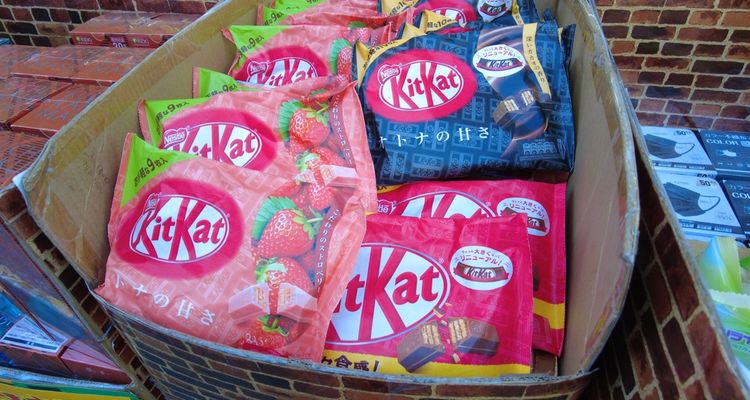 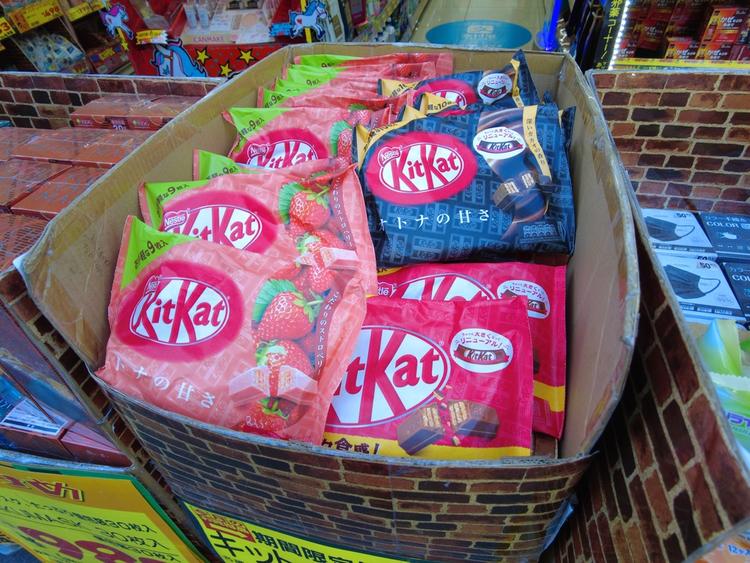 From watermelon to wasabi, sports drink to brown sugar syrup - if you've ever been to Japan, you might have come across some curious Kit Kat flavors that can't be found anywhere else in the world. Japan is miles ahead in the snack game in terms of the variety of Kit Kat flavors, and most of them remain exclusively available in Japan. Are you intrigued by all the Japan-limited Kit Kat opportunities? Collecting Kit Kat flavors is a fun thing to add to your to-do list in Japan, so let’s take a look at these unique flavors and where you can find them!

Why Are Kit Kats So Popular in Japan? A Brief History

Despite the snack's association with Japan, neither its name nor its origins has anything to do with Japan at all. Instead, Kit Kat first appeared in the United Kingdom in 1935, at the time called "Chocolate Crisp." As for why it's called "Kit Kat," the name was inspired by the "Kit Cat Club," the name of the social club the founders frequented. In turn, the club's name stood for Christopher Catling, the man who ran the shop where the club met.

The humble Kit Kat was first introduced to Japan in 1973, but it wasn’t until the turn of the millennium that Nestle Japan (who owns KitKat) first experimented with diversifying its product by introducing the strawberry flavor to Hokkaido - serendipitously at the start of the region’s strawberry-picking season.

Since then, popularity for Kit Kats grew with Nestle Japan’s ability to capitalize on Japan’s souvenir-giving culture, while limited-edition flavors create an image of scarcity and rarity, increasing the value of the Kit Kats for its customers. Twenty years on, nearly 400 flavors have been developed, and in any given year there are about 40 flavors available, plus 20 to 30 rotating new ones.

The quintessential Japanese flavor of green tea alone has had a staggering ten varieties. Four of the Japanese alcohol flavors, rice wine, plum wine, yogurt wine, and yuzu wine, have gained notoriety, and new flavors are constantly churned out.

What Are All the Flavors of Kit Kat in Japan? A Summary

Let me break this down for you a bit:

There are also annual seasonal flavors, such as sakura flavors that crop up around sakura season in the spring, and mint chocolate which often makes an appearance in early summer. Although the overall notes of the flavors are the same every year, oftentimes subtle changes are added to keep the flavors new and exciting.

Every few months, new flavors are introduced. This season - at the time of writing - the limited-edition flavors are sakura mochi, sakura Japanese sake, Easter banana, and yuzu matcha.

Now we move on to geography: regional flavors. Kit Kats have become popular souvenirs, or “omiyage,” for domestic travelers in Japan, where traditionally the act of bringing something back from a journey to share with friends, family, or colleagues is considered an essential social etiquette.

The flavors are based on carefully chosen local ingredients or delicacies that represent the very essence of a region - for example, Kyoto’s Itokyuemon matcha, Hiroshima’s momiji manju (maple-leaf shaped steamed cake), Okinawa’s beni-imo (purple sweet potato), and Nagoya’s azuki bean sandwich all utilize the flavors and treats that represent the regions from which they are based.

Almost every region will have its own unique Kit Kat flavor, and some have more than one. They make great souvenirs as they are light, have beautiful packaging, and come in individually wrapped small bites which makes sharing easy and hygienic.

Finally, there is the luxury “Kit Kat Chocolatory” kind - these are fancy Kit Kat bars devised by world-class patisserie chef Yasumasa Takagi, made with higher-grade chocolates and other ingredients such as dehydrated seasonal fruits. While you can find some of these superior bars in other countries where they have the Kit Kat Chocolatory stores, there are of course fancy flavors unique to Japan, such as cassis, yuzu, and passion fruit. They also have chocolate bars made with cacao sourced from exotic places such as Vanuatu and Papua New Guinea.

What Weird Kit Kat Flavors Can You Find in Japan?

Nestle Japan hasn’t held back in venturing into bold territory, with eccentric flavors such as baked potato, cough drop, hot Japanese chili, and edamame. They’ve got flavors that would make even Willy Wonka’s toes curl - sports drink, apple vinegar, yuzu and pepper, soy sauce, miso soup, ginger ale, mashed & boiled green soybeans...the list goes on. It makes you wonder if Nestle Japan’s product-development team had had a few too many cups of green tea and vending-machine sweets at their late-night brainstorming sessions.

New flavors also come about from Kit Kat’s collaborations with other brands, such as the iconic Tokyo Banana - the banana-shaped sponge cake with cream filling and the official souvenir sweet of Tokyo. The “Jujitsu Yasai” vegetable juice flavor was released in collaboration with the popular vegetable juice drink of Ito En, one of Japan’s largest drinks companies. The chocolate wafers contained cream made from Ito En's vegetable juice powder and were wrapped in white chocolate with an apple carrot flavor.

In 2018, to celebrate the 45th year since the Japanese launch of the Kit Kat, Nestle Japan held an online competition calling on people all over the world to nominate new flavors and cast their votes for their New Flavor World Summit campaign. There was an abundance of unusual suggestions including breast milk, stroopwafel, and mi goreng instant noodles. Finally, after half a million votes from 81 countries had been cast, the relatively conventional strawberry tiramisu was chosen as the winning flavor.

Which Kit Kat Flavors Are Popular in Japan?

So, does this mean that Japanese people expect excitement and novelty from their Kit Kats, or do they still stick with the comfort and familiarity of the classic flavors? And from a visitor's point of view, all of these flavors are a bit overwhelming: what's the must-try quintessential Japanese Kit Kat experience?

Thankfully, back in 2014, the website "goo," which collects rankings on all sorts of subjects, teamed up with telecom giant NTT Docomo's public research division to ask a few thousand Japanese about their favorite Kit Kats. The results are as follows:

#2 (2750 votes): "Otona no Amasa" with dark biscuit. "Otona no Amasa" translates to something like "grown-up's dessert" and is a whole separate line of Kit Kats with a lower sugar content, first released in 2010. This most popular variety includes bits of biscuit in the chocolate.

#5 (599 votes): Itokyuemon Matcha. As described above, this is a regional flavor from Kyoto, made in collaboration with a very well-established brand of matcha (green tea powder).

#7 (448 votes): "Amaou" strawberry. The "Amaou" Kit Kat is a regional flavor from the island of Kyushu, and refers to a specially-bred type of strawberry that is a distinct hallmark of Fukuoka Prefecture. The name "Amaou" is a portmanteau for the Japanese words for red, round, big, and sweet.

#8 (381 votes): Strawberry cheesecake. This Kit Kat is a regional item from Yokohama. Yokohama was among the first ports in Japan to be open to trade with the West, which is why Kit Kat decided to associate this Western delicacy with this city.

#10 (287 votes): Rum raisin. This is a regional item from Tokyo, for reasons that are frankly somewhat unclear. Kit Kat describes it as a chic, sophisticated flavor that evokes the capital city. The narrative might be tenuous, but the Japanese agree that it's among the better specialty flavors.

#11 (250 votes): "Tochi-otome" strawberry. This is a regional flavor from Tochigi Prefecture, about 2 hours to the north of Tokyo. It has been Japan's largest strawberry-producing prefecture for decades, and the "Tochi-otome," first produced in 1994, was a significant milestone in the area's quest for ever larger and juicier fruits

So the Japanese seem pretty united in finding that Kit Kats work best with chocolate, matcha, and strawberry flavors—do you agree with this conclusion? One thing you could definitely do is to try the various strawberry flavors and see what sets them apart!

And definitely try the regional Kit Kat flavors as well. They are well-loved among the Japanese for striking a balance between distinctiveness and broad accessibility.

Other Quirky Kit Kats: Things You Might Not Know...

There have also been Kit Kat products developed for fund-raising for disaster-relief in Japan, where 10 yen for every bag purchased is donated to the cause. The “Ikinari Dango,” a sweet potato and azuki bean treat that Kumamoto is well known for, supports the rebuilding of Kumamoto after a powerful earthquake in 2016 struck the region, and the mini “Momiji Manju” is to help relieve the area that the Northern Osaka earthquake struck in June 2018 as well as the mass floods that occurred in West Japan in July the same year.

Funky flavors aside, some of these Kit Kat flavors also come with suggestions on how to eat them. The ice cream flavor (ironically) suggests that you grill them in a toaster, while the nuts & cranberry yogurt bars are supposedly better after putting them in the fridge.

Toward the end of 2019, Nestle unveiled the Cacao Fruit Kit Kat, which replaces added sugar with cacao pulp, adding yet another unusual recipe to the Japanese Kit Kat repertoire.

Shopping Guide: Where Can I Buy Japanese Kit Kat Flavors?

If you're looking to buy these weird Kit Kat flavors in Japan, you can actually find them in a lot of places: convenience stores, supermarkets, souvenir stores, drug stores, and even some post offices. The discount chain superstore Don Quijote (or Donki for short) also provides a great variety of Kit Kats from some of the other regions of Japan and at a lower cost. You will also find them in most airports, train stations, and major bus terminals, as well as other locations that host gift shops.

A Kit Kat enthusiast’s trip to Japan must include a visit to one of the Kit Kat Chocolatory stores in Tokyo and Osaka for the experience as well as the aforementioned high-end Kit Kat flavors. The beautiful gift boxes, which contain a variety of flavors from the Chocolatory series, make a perfect present to take back home.

Do be aware that the limited-edition flavors are a hot commodity, and can sell out unexpectedly fast, especially from supermarkets and convenience stores. Several flavors are available online through various online retailers, but some of them can only be bought in person, so if you see a flavor you like, be sure to snap it up when you can!

Japan took the modest Kit Kat and ran, making it a product that both locals and travelers love, even if the travelers already have Kit Kats in their home countries. Are you one of the few enthusiasts who has journeyed around Japan in search of the rare and collectible Kit Kat flavors? Were you intrigued by some of those flavors, or were you appalled? What's the best Kit Kat flavor, according to you? Be sure to try as many flavors as you can the next time you can get your hands on some Japan-only Kit Kats!