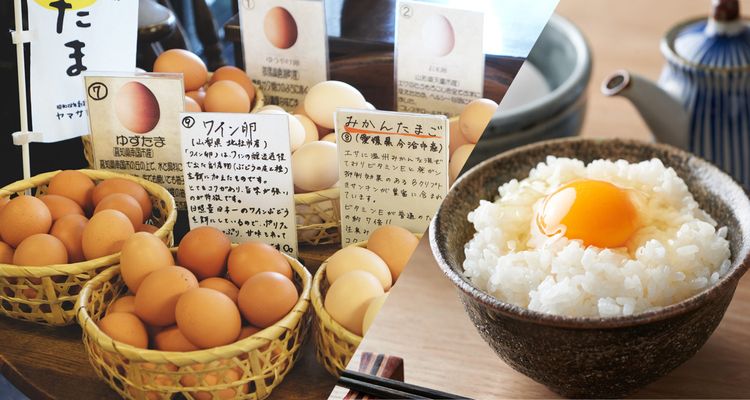 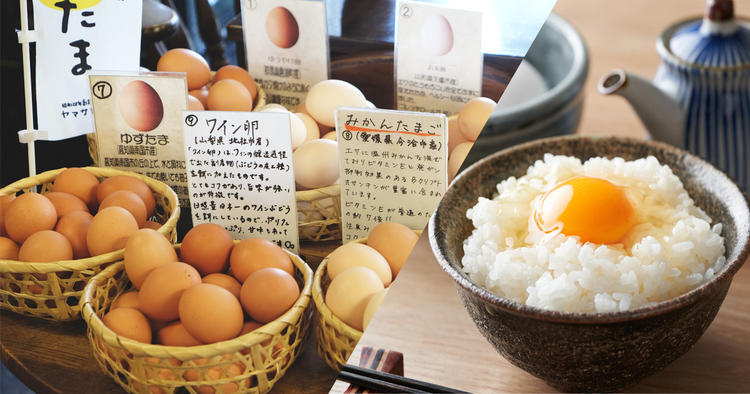 Few other countries enjoy raw food as much as Japan. Along with uncooked fish and meat, raw eggs are also exceedingly popular. You can enjoy them over rice or as a dipping sauce for sukiyaki (hot pot stew), and in many other dishes. However, a lot of foreigners may feel uneasy about eating raw eggs due to hygiene concerns. That’s why we spoke with the proprietor of Kisaburo Nojo, an egg specialty restaurant in Tokyo, for this edition of our "Culture of Japan" series - to discover how to safely enjoy delicious raw eggs the Japanese way!

In many countries, eating raw eggs is considered dangerous. Raw eggs left in unsanitary conditions are likely to be contaminated by salmonella, which can result in food poisoning, high fever, stomach cramps, diarrhea, and other symptoms. For infants and the elderly, these symptoms can be life-threatening. That is why many people from abroad are shocked to discover that Japanese people regularly eat raw eggs!

It’s said that Japanese people started eating eggs around the Edo Period (1603 – 1868), mainly by steaming or frying them directly over heat. The habit of consuming eggs raw appears to have kicked off during the Meiji Period (1868 – 1912) with “tamago kake gohan”, a simple dish of raw egg on rice. Afterwards, other dishes using raw eggs were born, such as sukiyaki, tsukimi udon (raw egg on thick noodles), and kaisen-don (rice bowl dish with seafood often topped with a raw egg).

So, are all these dishes really safe from salmonella? The answer is: Yes!

Poultry farms in Japan are subject to stringent regulations, including infection control measures such as preventing chickens from coming into contact with other animals. Supply of chicken feed is likewise rigidly controlled by the “Act on Safety Assurance and Quality Improvement of Feeds”. After the eggs are collected, they are brought to a GP Center to be examined and sorted before being washed, sterilized, and subjected to other processes to ensure food safety. Finally, they’re packaged and distributed. This control over both poultry and eggs prevents the risk of salmonella contamination.

Furthermore, eggs in Japan are given an expiration date of around two weeks, which indicates the latest that they can be safely eaten raw. This means that, as long as they’re thoroughly cooked, Japanese eggs can still be eaten even past their expiration date. This kind of system is unique to Japan, as most countries will use longer dates based on the assumption that the product will not be consumed raw. However, with Japan’s stringent hygiene management ensuring the safety of consumer products, the risk of food poisoning from raw eggs is virtually non-existent!

While there are numerous raw egg dishes in Japan, the most popular one is “tamago kake gohan”, a simple mix of rice, eggs, and soy sauce, which is often consumed for breakfast.

The Origins of Tamago Kake Gohan

It is said that Kishida Ginko (1833 – 1905), a war correspondent from Misaki, Kume District, Okayama Prefecture (formerly Haga Village, Kumehokujo District, Mimasaka Province) was the first person to eat tamago kake gohan during the Meiji Period, which he recommended to others. In a magazine from 1927, Kishida calls the dish “keiran’ae” and describes it as rice topped with raw egg, salt, and red peppers. The dish gradually became popular and soon began to appear on regular Japanese tables. Nowadays, it is considered a cornerstone of Japanese cuisine, and has even gained many fans overseas. Younger Japanese people like to call the dish by its initials: TKG.

Japanese people often eat TKG for breakfast because it requires very few ingredients and is simple to prepare. Highly nutritious, the combination of eggs and rice ensures a good start to the day. Eggs are rich in fats, calcium, magnesium, vitamin B2, iron, and more. In fact, it’s said that B vitamins become broken or lost when heated, so eating eggs raw allows you to absorb all those important nutrients. Raw eggs also supplement essential amino acids, which rice lacks. However, keep in mind that excess intake of eggs might be bad for you as they also contain cholesterol and saturated fatty acids, so make sure you go easy on them.

Tamago kake gohan can be quickly made using just rice, eggs, and soy sauce. However, different people prepare and eat the dish in different ways. To uncover the secret to delicious raw egg on rice, we made our way to the Tokyo egg specialty restaurant Kisaburo Nojo!

According to Mr. Takagi, the proprietor of Kisaburo Nojo, there is a much better way to prepare tamago kake gohan than simply throwing all the ingredients into a bowl and mixing them. Here it is:

2. Break an egg into a separate bowl and beat it lightly 2 – 3 times (don’t beat it so hard that it starts to foam).

3. Pour the beaten egg over the rice, mix gently, and eat right away.

Preparing your tamago kake gohan like this allows the soy sauce flavor to spread across the entire dish without interfering with the rich essence of the raw egg.

Mr. Takagi also suggests adding a bit of salt to the egg to achieve a lighter yet equally exquisite taste.

It’s been three years now since I moved from my native Vietnam to Japan, but this was my first experience with tamago kake gohan. I’d always wondered why Japanese people enjoyed such a simple, plain meal. However, after trying it for myself, I finally understood. After the first mouthful, I couldn’t stop eating until I’d scoffed down the entire bowl. While indeed simple, the dish had a wonderful taste without any off-putting whiffs of raw egg. The firm, chewy rice grains fused with the savory egg and harmonized with the rich soy sauce to form a mild yet highly nutritious dish. I also tried it with some salt, which mellowed it out even more. I think virtually anyone could easily eat a couple of bowls of salted TKG!

Kisaburo Nojo: Taste Rare Eggs From All Over Japan

Kisaburo Nojo, located by Sengoku Station in Tokyo, not only served us up an amazing rendition of Japan’s beloved staple dish, but the proprietor, Mr. Takagi, also took us through the store’s history and egg cuisine in detail, making for a fascinating, fun-filled day.

Kisaburo Nojo opened in 2009 as Tokyo’s first egg specialty restaurant. Its origin goes back to the time when Mr. Takagi worked in a restaurant in Yamanashi Prefecture and became fascinated with the wide assortment of egg flavors and colors that came from a nearby poultry farm. He eventually came upon the idea of opening a restaurant that would specialize in egg dishes of all kind.

The eggs at Kisaburo Nojo are painstakingly sourced from all over Japan. Mr. Takagi’s criteria for selecting eggs include yolk colors unavailable in average supermarkets, along with choosing just one egg variety from each region. Every egg at the restaurant is bursting with individuality, giving customers a chance to enjoy a wide variety of rare treats. For me, this is the most charming part of Kisaburo Nojo. If you think that all eggs are the same, you’ll surely change your tune after a visit!

There are a total of 12 egg varieties at Kisaburo Nojo, with six displayed in the restaurant on a daily rotation, and special weekend-only additions. On the day that we visited, we were lucky enough to be treated to eight varieties: Yuyake Tamago, Okome Tamago, Free-range Fertilized Eggs from Hinai-Jidori chickens, Yuzutama, Mikan Tamago, Inka no Tamago, Wine Tamago, and the day’s limited-edition “Yumeo” egg.

While the colors of the shells are roughly the same, once you crack open the eggs, you’ll see that their yolks couldn’t be more different. For example, the Okome Tamago variety, meaning “rice egg” in Japanese, is named so because the chickens it comes from are fed rice, making the yolk white, light, and very palatable.

On the other hand, the Yumeo egg yolk is a beautiful orange-red color with a full-bodied savory flavor that comes from chickens being raised on a mixture of mugwort, nori seaweed, garlic, green tea, paprika, chili pepper, mulberry, and plum vinegar. As you can see, the color, flavor, and nutritional content of eggs can differ dramatically depending on the feed and the way the chickens are raised.

In addition to the eight eggs introduced above, other varieties are also available, including blue-shelled eggs from South American Araucana chickens, herb eggs from black chickens, which are renowned for their sweetness and are ideal for confections, or red-shelled eggs.

From this sizable assortment, Mr. Takagi recommended the store’s two most popular varieties: Yuyake Tamago and Yuzutama. Yuyake Tamago contains around 20 times more vitamin E than regular eggs, and boasts a robust, rich taste. The yolk has an orange hue said to resemble the setting sun, hence the name, which means “sunset” in Japanese. The Yuyake egg is frequently used in the making of pudding and oyako-don (rice bowl dish with chicken and eggs), which are also available at Kisaburo Nojo.

Yuzutama, on the other hand, is a very rare variety prized for its pleasing aroma reminiscent of the yuzu citrus fruit. Because the aroma eliminates the typical smell of raw eggs that some find off-putting, the Yuzutama variety is highly recommended for first-time raw egg eaters. Personally, I was very impressed by the singular flavor of Yuzutama. I can honestly call it the most unique egg that I’ve ever tasted!

With such an extensive range of egg varieties, Kisaburo Nojo is the ideal place for those seeking to try tamago kake gohan. The restaurant’s TKG menu features the Tamago Kake Gohan Set (1 egg), the Tamago Kake Gohan Meal (unlimited eggs), and the TKG Omakure Meal (unlimited eggs and rice). Besides the eggs, the dishes’ rice and soy sauce are also top-quality. According to Mr. Takagi, the firmness of his Nagano Prefecture rice enhances the flavor of the egg, while the soy sauce is specially brewed for tamago kake gohan, boasting a lighter taste than most commercial varieties.

In addition to soy sauce and salt, you can add 14 other toppings to your TKG at Kisaburo Nojo, including spicy cod roe, wasabi, whitebait, wakame seaweed, and onion. The most popular topping is the cod roe, which is what I went with. The spicy-salty taste of the roe paired perfectly with the richness of the egg.

There Are Lots of Egg Dishes to be Found at Kisaburo Nojo!

In addition to the classic tamago kake gohan, you can also order “Yuyake Oyako-don” made from Kaiji Shamo chicken raised naturally in Hokuto, Yamanashi Prefecture, and Yuyake Tamago eggs. There is also the unique “Yuzutama Raw Oyako-don”, an exceedingly rare dish featuring Yuzutama eggs and seared, minced chicken garnished with soy sauce and wasabi. As you can see, there’s a multitude of egg and chicken-based dishes to enjoy at Kisaburo Nojo, so be sure to visit the restaurant on an empty stomach!

Finally, be sure to leave some room for Mr. Takagi’s homemade pudding, which uses yolk from Yuyake Tamago eggs. Unfortunately, we had a bit too many eggs for one sitting, so we decided to save the pudding for next time!