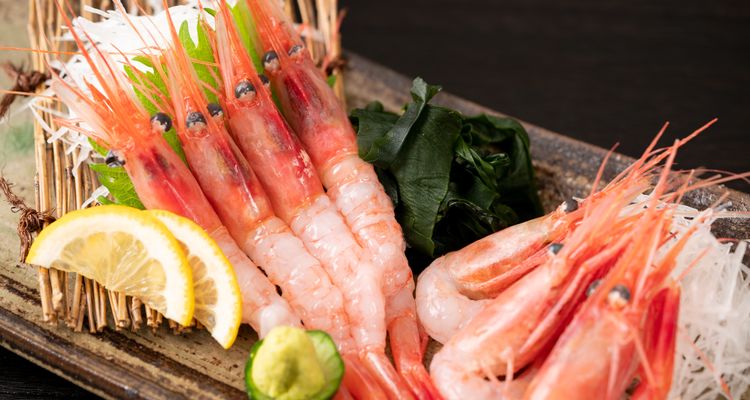 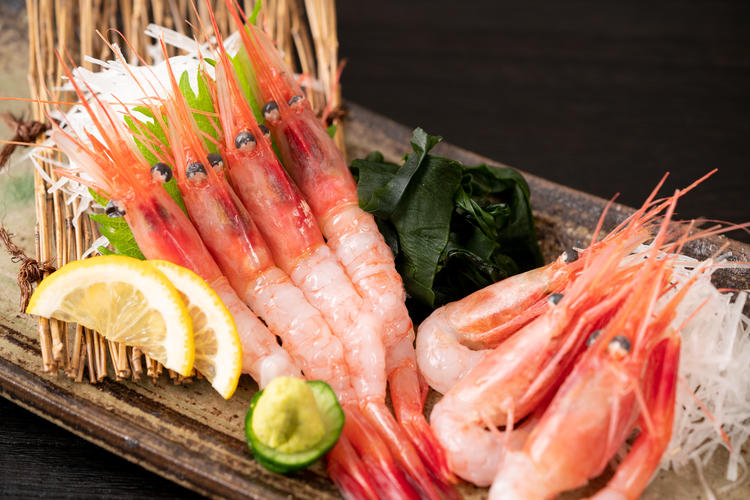 Hokkaido boasts the largest haul of shrimp in all of Japan, and the freshness and variety of shrimp here makes it a wonderland for food lovers. There are so many ways to prepare shrimp, including Japanese classics like sashimi and sushi, as well as shrimp tempura, breaded and fried shrimp, and shrimp with chili sauce. This article will introduce the varieties of shrimp you can eat in Hokkaido, popular Japanese shrimp dishes, and some must-try Hokkaido restaurants for all shrimp lovers!

Sweet shrimp (ama-ebi) is the common name for the Pandalus eous variety of shrimp. They are red in color, around 10-13 cm in length, and have easy-to-peel shells with soft, moist flesh. When eaten raw, these shrimp have a highly distinctive texture that melts in the mouth, and a sweet flavor that gives this variety its name. They're most delicious during the cold weather months from late autumn until the snow melts in the spring.

Their vivid blue roe is also a delicacy. In Japan, it's most common to eat sweet shrimp raw as sashimi or sushi.

Botan shrimp are around 10-15 cm in length and have a jagged, saw-like protuberance on their head. They are somewhat large in size, and their translucent pink color is very appealing. They're in season from winter to spring, from around November to March.

Their flesh is not overly soft, and has somewhat of a bite to it. This variety is popular for its rich, savory flavor that lingers on the palate. If you want to fully enjoy the entire shrimp, using its head to make the stock for miso soup is also highly recommended. The dark brown part of the head, called "miso" in Japanese, is also rich and delicious. Even if it's a part of the shrimp you may hesitate to eat, we highly recommend trying it!

It's most common to eat botan shrimp as sashimi, sushi, or in shabu-shabu (sliced meat parboiled with vegetables). Cooking this variety of shrimp shabu-shabu style improves the texture and brings out the sweetness and umami flavors. If you want to waste no part of this shrimp, you can make stock for miso soup using the shrimp heads. Other delicious ways to eat botan shrimp include mixing the flesh and miso part of the head with pasta, simply grilling it with a touch of salt, or topping a rice bowl with a hearty serving of shrimp.

Officially known as the Pandalus latirostris variety of shrimp, hokkai shrimp are also called North Sea striped shrimp, or simply striped shrimp. Around 13 cm in length, this shrimp gets its name from the wide stripes on its body. This shrimp has a similar green-brown color to the eelgrass that forms its habitat in the wild, but when boiled it takes on a bright red color, which has earned it the nickname the "ruby of the sea".

This is a valuable variety of shrimp that is currently under fishing restrictions in order to protect the species. Striped shrimp are most delicious in summer and autumn when the fishing restrictions are lifted. In summer they have a sweet, creamy texture, but they're also quite popular in the fall as the females often bear eggs. They become sweeter when boiled, so they are often cooked in salt water. You can also eat them served as sashimi, canned, or preserved by boiling in soy sauce. There is also a "miso" in the head of this variety. The trick to getting to this part is to suck it from the head.

Mantis shrimp are famously caught in the Otaru and Niseko areas of Hokkaido. Around 12-17 cm in length, Hokkaido-caught mantis shrimp are known for being large in size and are particularly delicious. This species is in season in May and November. The egg-bearing females are said to be delicious in spring, while the males tend to be more popular in autumn.

Mantis shrimp can lose their freshness quickly, and once dead the flesh will quickly start to break down, so it's common to boil them live in salt water as soon as they're caught. They're delicious served with wasabi and soy sauce or sautéed with garlic.

Grape shrimp, formally known as higoromo shrimp, are named for their grape-like coloring.

Usually found from August to September in Tokachi, Kushiro, and Nemuro, this variety is most commonly caught in Rausu Fishing Harbor in Shiretoko. In Shiretoko, they are caught using a unique method called shrimp-cage fishing. Only about 10 kilos of grape shrimp are caught here per day, making them a valuable variety that is sometimes referred to as the "phantom shrimp". They have an even richer sweetness than sweet shimp, which makes them great for sashimi.

Sashimi is the best way to enjoy the sweet flavor and fleshy texture of shrimp. A translucent, glossy look to the flesh is evidence of freshness, while flesh on the whiter side is best avoided. On the other hand, some varieties of shrimp are sweeter when boiled rather than served fresh.

Grilling shrimp condenses the umami flavors and increases the sweetness, and the best way to grill shrimp is to season them simply with salt. Cooked this way, the fragrant aroma is sure to whet the appetite. It's common eaten by first separating the head from the body, then removing the legs and outer shell. If you want to eat the miso part of the head, remove the shell from the forelimbs and head, and either suck or use chopsticks to extract the miso.

People often eat shrimp shell and all, but be aware that some varieties of shrimp have harder shells that can cut the inside of your mouth.

Shrimp tempura, or ebi-ten, is made by coating shrimp with a batter made from flour, water, and egg, and then deep-frying it. This preparation style elevates the natural flavors of the shrimp. Shrimp tempura is delicious eaten with tempura dipping sauce, salt, or soy sauce. Shrimp tempura can be eaten in various ways, and it goes exceptionally well on top of rice bowls or with udon or soba noodles.

Fried shrimp, or ebi-fry, is another type of fried shrimp dish made by battering the shrimp in flour, egg, and breadcrumbs. This style is characterized by its crunchy texture. It's more common to use just the body of large shrimp, but sometimes the whole shrimp is used, including the head. If you're served fried shrimp prepared this way, it's up to you whether or not to eat the head. Ebi-fry is often served with tartar sauce or lemon.

Chili shrimp, or ebi-chiri, may often be mistaken as a dish that originated in China, but it was actually created in Yokohama's Chinatown district. The chili shrimp name is short for "shrimp and chili sauce stir fry", and is made by flash-frying shelled shrimp that has been coated in potato starch, then cooking it down in a chili sauce made from broad bean chili paste, ketchup, ginger, and other ingredients. Since it was made to suit Japanese tastes, it's not too spicy, has a mild sweetness, and goes well with beer.

As you might have guessed, mayo shrimp is short for shrimp with mayonnaise sauce, and is made by coating shelled shrimp with potato starch, stir drying or deep frying it, then dressing it with a mayonnaise sauce. The tender texture of shrimp goes well with the savory flavor of mayonnaise; it's a dish that mayonnaise lovers won't be able to resist.

Fumiichi sources fresh seafood caught in Mashike Harbor directly from a fishery company so that customers can enjoy the flavors of the season's seafood. A popular dish is the Sweet Shrimp Assortment, made with fresh Mashike sweet shrimp served generously in a wooden serving box.

Kita no Nishinyasan is located in the Shibuya Fisheries Market in Haboro. As this popular diner is part of the market, customers can enjoy seafood dishes at very affordable prices. Popular dishes include the luxurious Sweet Shrimp Rice Bowl, which comes topped with 20 pieces of shrimp! The market also holds an event called Herring Day on the 24th of each month where a few set dishes, such as rice bowls and set meals, are available at around half-price.

With just a simple reservation, you can enjoy all-you-can-eat sweet shrimp at Ororon Shokudo. Other recommendations include the Sweet Shrimp Ramen, which was included in the 2012 Hokkaido edition of the Michelin Guide, as well as the Sweet Shrimp Rice Bowl and Sweet Shrimp Set Meal. Set meals come with sweet shrimp rice bowls and delicious, crispy fried flounder. Shrimp is used to create the stock for the miso soup, bringing out a flavorful and delicious taste.

Sugaso was featured in the 2012 Hokkaido edition of Michelin's Bib Gourmand Guide, and this restaurant prides itself on the skilled craft used in their cooking. The shop next to the dining area sells sweet shrimp caught each morning which is flash frozen and stored at -50 degrees to preserve its freshness. Heads and tails have been removed, making them convenient to eat as well. The range of original packaged foods and collagen-rich sea cucumber soap here are also recommended.

Marutoma Shokudo is arguably the most famous restaurant in Tomakomai, and its Marutoma Bowl is particularly popular. This generous rice bowl seems to overflow with a huge amount of sashimi, including sea urchin, abalone, salmon roe, hokki clam, and 10 pieces of shrimp. At 1,300 yen, it's also very reasonably priced. Another popular option is the hokki clam curry. It's so popular, people often wait an hour or more to be seated.

Otaru Sankaku Market is a collection of 16 stores lining a narrow passage around 200 meters long and 2 meters wide. Six of these stores are eateries where guests can enjoy meals served from 7:00 am to 5:00 pm. These restaurants offer dishes like rice bowls made with fresh seafood and daily set meals made from seasonal ingredients. Another interesting thing you can do here is have ingredients you've bought at the market prepared for you to create your own original rice bowl.

Nemuro Hanamaru serves seasonal seafood unique to the Nemuro area, a fishing town sometimes called a "treasure trove of seafood". This is one of the most popular conveyor belt sushi restaurants in the Sapporo Station area, and regularly sees customers lining up for a seat. One reason for their success is the wide range of sushi sold at reasonable prices here. A daily menu is also available where you might find some rare seafood choices not available on the main menu.

Ichigen is a popular ramen shop that you'll often see customers lining up to get in. You can choose from two types of noodles here: extra-thick noodles that absorb the umami flavor of the sweet shrimp, and thin noodles that perfectly complement the soup's aromatic flavors. The sweet shrimp soup is made each day by carefully stewing a large amount of shrimp heads, producing a rich sweet and savory flavor. The specialty shrimp-flavored tenkasu (tempura batter pieces), soft-boiled seasoned eggs, high-quality char siu (roast pork), and an aromatic shrimp powder topping all serve to heighten the delicious aroma of shrimp.